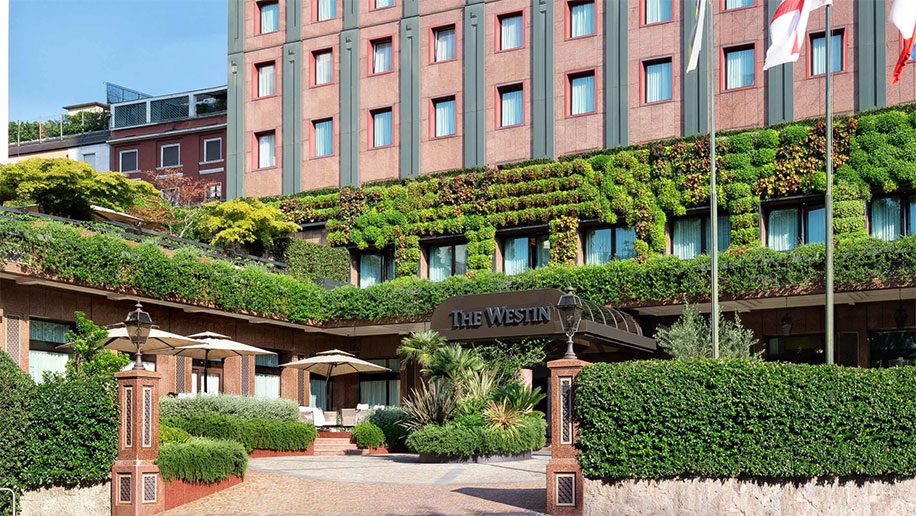 What’s it like? Dating from 1950 – it was built on the site of a former palace destroyed by bombing in 1943 – The Westin Palace has been renovated in recent years, incorporating the balconies and raising it from 10 to 12 storeys. The granite and red Aswan marble façade looks particularly impressive at night, illuminated by vertical lighting. The interior is more of a classical Empire-style hotel with lots of gold, gilt and chandeliers, but this is clearly a modern hotel with many of the Westin signatures(see below). The Westin Palace is one of four Westins in Italy, the others being in Florence, Rome and Venice.

Where is it? On one side of Milan’s huge Piazza del Repubblica, also home to Milan’s most famous hotel, the Principe. It’s a one-minute walk to the metro station for connections all over central Milan, and a 10-minute taxi ride to Stazione Cadorna from where you can take the shuttle trains ervice to Malpensa airport (40 minutes; €11).

Room facilities The 228 rooms (including 13 suites) are, like the public areas, decorated in Empire style with 19th century upholstered furniture, but beneath the surface the facilities are modern. Rooms are fitted with  the Westin Heavenly Bed and the Heavenly Shower, which has multiple water jets. All rooms have both wired and wireless high-speed internet access (€20 for 24 hours). There are also flat-screen TVs, movies on demand, voicemail, dataport and dual-line telephone. The service is excellent – when I had problems connecting to the internet the problem was solved quickly, and the twice-daily maid service ensured the room was always immaculate. There is also a Westin Workout room on one of the guestroom floors, with all the necessary gym equipment, yoga mats and instruction for those too busy to take the lift down to the hotel gym.
Among the 14 suites, several have marble Turkish baths, and also views of Milan and the Duomo Cathedral. The presidential suite is a duplex apartment running from the eighth to the ninth floor, decorated with Murano lamps, precious chandeliers, damask fabrics, antique furniture,a baby grand piano and a giant terrace overlooking Milan.

Restaurant and bars The Lounge Bar is good for fast and informal food, and serves drinks until late. It’s a comfortable space with banquette seating and dimmed ighting in the evenings. The Casanova Grill Restaurant is the Mediterranean-style fine dining option, with a good choice of dishes under executive chef Augusto Tombolato (peppered raw ham with smoked mozzarella cheese and tomato timbale, €20). The choice of menus includes the signature Westin wellness menu, with organic products.Weekly specials feature a special seasonal dish, and sommeliers will guide you through the intricacies of an extensive Italian wine list(international selections available). In the summer the restaurant moves from the ground floor to the first floor and has a terrace with views onto the Piazza and the small park which screens the hotel from the main road.

Business and meeting facilities The business centre, on the first floor, has secretarial and translation services, computers, colour printers, and high-speed internet access (you have to get a code from the attendant or reception staff to have this charged to your room bill). There are 12 modular meeting rooms for up to 400 people. All are equipped with professional banquet and catering services, theatre seating, state-of-the-artaudiovisuals, and wifi access. The larger meeting rooms can also be equipped with extra mid-room plasma screens free of charge in addition to the main projection screen.

Leisure facilities The hotel has good leisure facilities, with a relaxation area, two Turkish baths (one for women and one for men) and four treatment rooms, one of which is dedicated to couples’ treatments. The fitness centre has a 280sqm area that includes a spacious fitness room kitted out with modern Technogym equipment. There are also detailed jogging maps around the local area with suggested routes of different lengths.

Verdict The Westin is facing more competition than ever before with new openings such as The Bulgari and the Park Hyatt, but it is an excellent five-star choice, and one obviously holding its own against the newcomers. The service is the main draw, along with a good choice of meeting facilities.

Price Internet rates for a midweek stay in early October started at €320.