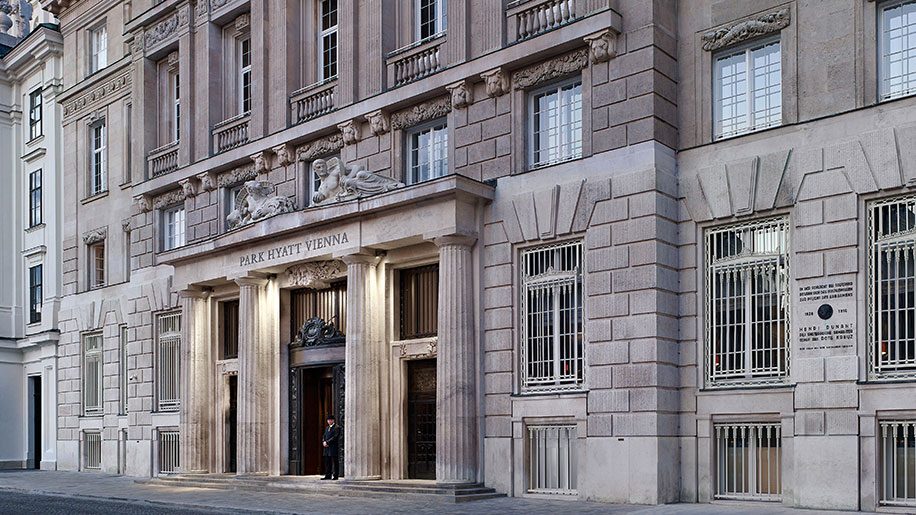 The five-star luxury Park Hyatt brand made its Austrian debut in June 2014, closely followed by the Park Hyatt New York in August.

This property certainly sets the standard for Viennese hotels. The 100-year-old former headquarters of the Austrian Hungarian Monarchy Bank has been renovated at a cost of millions of euros over a two-year period.

The design features many references to Vienna’s golden age of the 19th and early 20th centuries, but is modern and most of the interiors are new rather than refurbished.

There is a lot of artwork, predominantly by Viennese and Austrian artists such as Josef Hoffman and members of the Wiener Werkstatte. The ceiling heights in some of the first-floor rooms are impressive, at up to 4.5 metres.

In Vienna’s new pedestrian Goldenes Quartier on Am Hof square, part of the First District (a UNESCO World Heritage Site).

It is in the centre of the city’s exclusive shopping district and close to St Stephen’s Cathedral and the Hofburg Palace. The central train stations (Westbahnhof and Hauptbahnhof) are ten minutes by taxi; the airport 40 minutes.

Renovated by Dutch company FJ Stijl, the hotel’s 143 rooms come in a range of sizes and furnishings, although they are grouped into four main categories: Standard, View, Deluxe and Suite. Standard rooms (Park King and Park Twin) are 35-60 sqm and look out on to the inner courtyard.

Next up are the View rooms, which face towards the Am Hof and shopping streets around the hotel, and range between 36 and 49 sqm. Park Deluxe View Kings also have city views, but are on lower floors and have the original high ceilings.

In general, the rooms are Vienna-inspired with contemporary art and wood flooring.

The 35 suites are of all shapes and sizes, and are more design-focused, with large expanses of Hungarian marble or lapis lazuli above the bathtubs. My Mansard room (categorised as a Park Studio) on the top (sixth) floor was very comfortable, with automatic blinds.

Having only been open a few weeks, the hotel was experiencing teething problems – for instance, at night, I found that after turning off the lights, they would all go back on after about 20 minutes. The first two times this happened I tried to find a remedy. The third time I resorted to using an airline eye mask.

The hotel comprises several buildings; one end has five storeys while the other has six. There was a glass elevator up to my room, although this was accessed by steps, which was tricky when carrying luggage. The elevator also had some problems during the first days. 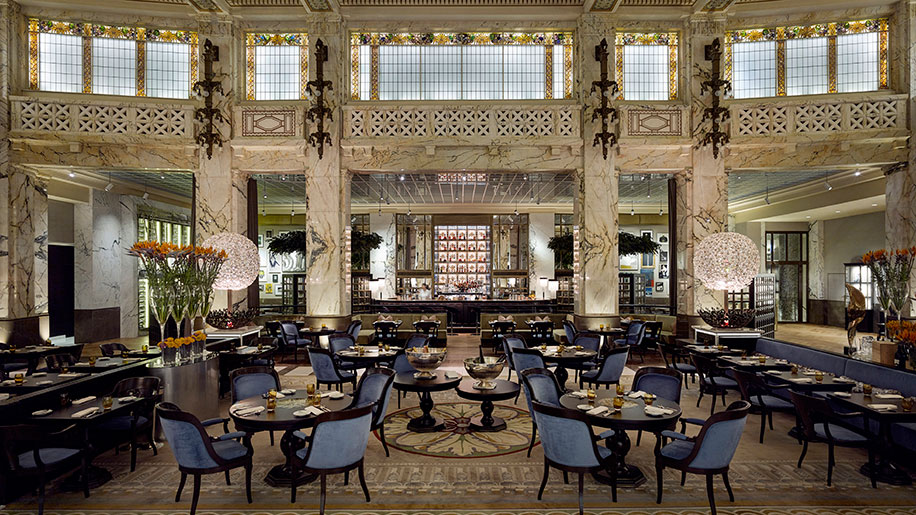 The former cashier hall on the ground floor has been converted into an all-day dining restaurant – the Bank – serving breakfast and “European provincial cuisine” from an open kitchen.

Pearl bar is accessed from the street and offers light food (Wiener Schnitzel and sharing plates). The Lounge is a small area serving breakfast, tea and cake, while the adjacent Living Room sells cigars and whisky.

The executive space on the second floor – termed Bel Etage – has 800 sqm divided into eight meeting rooms and a ballroom, making good use of the historic property. All have daylight.

In the basement, the former bank vault, the 930 sqm Arany spa has six treatment rooms, a 15-metre pool, a gym with the new Artis range from Technogym, and a separate wet area with sauna, steam bath, sanarium and vitality shower.

A wonderfully luxurious hotel that has made the most of both its central location and historic structure. The restaurants and bars are elegant – as are the guests dining and drinking in them.