The London Marriott Hotel Park Lane is one of several Marriotts in the area, including the JW Marriott Grosvenor House, the Marriott Grosvenor Square and 47 Park Street Marriott Residences. Emerging from an extensive multi-million pound renovation under RPW Design the hotel is aiming for five star luxury, not withstanding the “regular” Marriott branding.

Despite its busy location on a transport intersection (Marble Arch), the hotel’s Portland stone façade with beaux-arts detailing, Greek motifs and elegant railings on the windows is a beautiful sight.

The building was designed as flats in the years during and after the First World War by Francis Verity who specialised in designing London theatres such as the Empire in Leicester Square as well as cinemas such as the Pavilion, Shepherd’s Bush (now the Dorsett Regency (visit businesstraveller.com/tried-and-tested for a review). The hotel also occupies the ground floor of a newer block around the corner on North Row, and this is where the current entrance and lobby is (the upper floors are luxury flats). The lobby is on two levels, with stairs leading up to the reception and concierge desk. The new look of the hotel is subtle (using shades of white, pale grey and lavender) without being minimalist, and combines finishes in leather, silk, wood and marble. It still has a residential feel, as though you are entering a luxury apartment, and there’s normally a doorman in uniform outside. Check-in was at a low desk with a comfortable armchair, although the process wasn’t particularly quick, and it gave me time to watch people queuing for the three lifts, which are too slow to service the 152 rooms. Outside the entrance to the Lanes bar and restaurant (also on the ground floor) an excellent shoe-shine station (the Jaunty Flaneur), which is there from 12pm to 7pm weekdays. On the corner of Park Lane and Marble Arch, a two-minute walk from Marble Arch underground station (Central Line). The entrance is on North Row, a road that runs east-west from Park Lane.

All 152 rooms and suites (up to 40 sqm) over floors one to five have been renovated, as have all public areas. There’s lots of interesting British artwork on display, and the thick carpets help muffle noise, as does the outstanding secondary glazing. (There aren’t many roads in London that are busier than Park Lane at Marble Arch but noise was at a minimum and I slept well.) All rooms, including entry-level Deluxe ones (29 sqm), are comfortable with modern, restrained design. Though these have views of the internal courtyard. They feature Bluetooth LCD screen TVs and Floris toiletries in the marble bathrooms, slippers, bathrobes and a good size work desk. Wifi is £10, free for Marriott Rewards members, or£50 per day for high speed. Superior rooms are the same size but have views of Mayfair, while Executive Rooms (same size) and Junior Suites (40m2) have access to the Executive Club on the lobby level, which is open for continental breakfasts, midday snacks, afternoon tea, hors d’oeuvres, dessert and free non-alcoholic beverages. The hotel’s restaurant on lobby level, Lanes of London, was the first part of the hotel to be renovated, opening in January 2014. This has a very short menu but the food is attractively presented and delicious. The wine list is similarly brief – only half a dozen choices of white and red wine, respectively. It was quiet when I went in August but the service was friendly if a little uncertain of itself. Breakfast the next morning was served a la carte, but too slow for my liking. There are three meeting rooms on the lower basement floor, each with natural daylight, the largest being the Oxford Suite where 40 delegates can hold a banquet. The Hyde Park Suite holds 30 people for a reception, while the Mayfair boardroom can host 16 guests theatre-style.

Surprisingly, as well as having a small but well-equipped fitness room in the basement, the hotel has a 12.5-metre swimming pool. There are plans for this area to be renovated although no date has been set and there is no spa. The refurbishment has turned the London Marriott Park Lane into a five-star hotel but the prices have risen to match. Only the service needs some tweaking to make it a competitor for the likes of the Lanesborough and the Dorchester.

HIGHLIGHTS This is unlike any “standard” Marriott I have stayed in- beautiful design, a real sense of luxury and a seeming “one-off” upgrade for the brand.

PRICE Flexible internet rates for midweek stay in March in a Deluxe room started from £429. 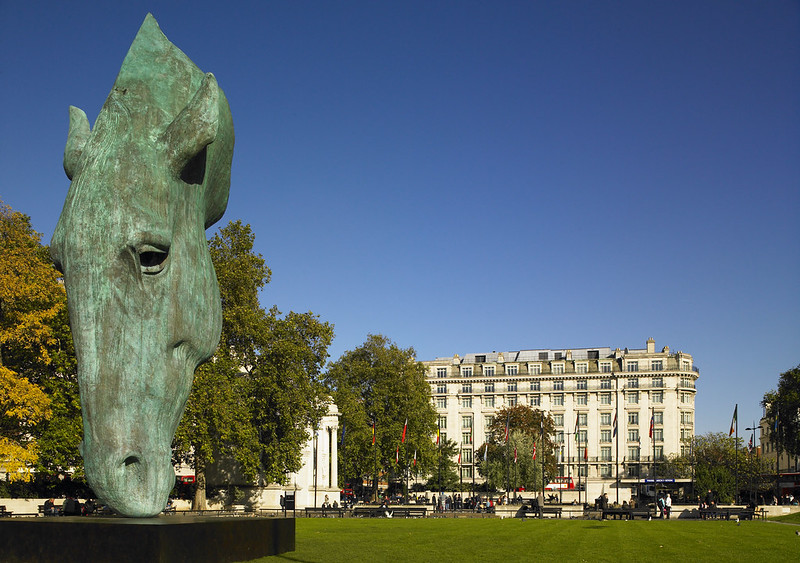