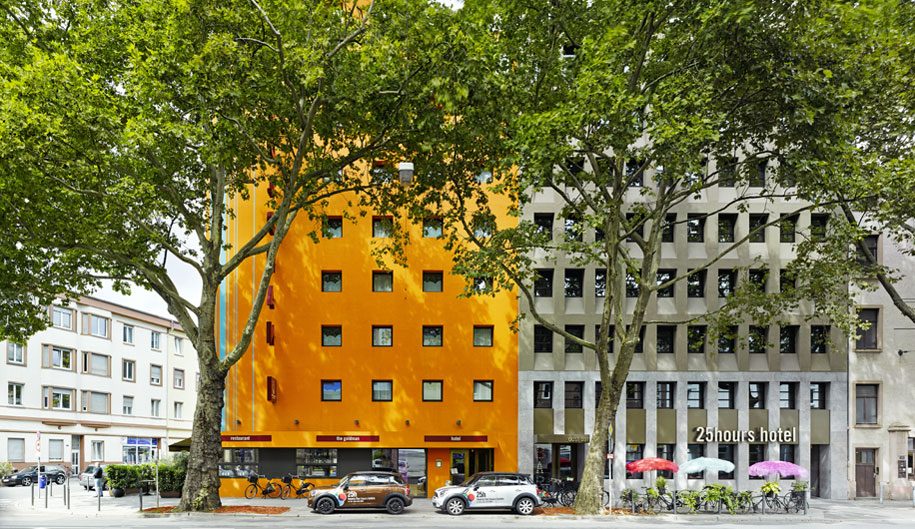 German chain 25 Hours Hotels has seven properties in total, with two in Frankfurt, one in Berlin, two in Hamburg, one in Vienna and one in Zurich. The entire group is also a member of the Design Hotels collection.

Forthcoming openings include Hamburg and Munich next year, and Dusseldorf/Cologne and a second one in Zurich in 2017. Other cities the brand is looking at are London, New York and Amsterdam, among others.

The Goldman opened in 2006 with 49 rooms, but was later expanded with the purchase of a building next door (East sector) housing another 48 rooms. This summer, the rooms in the older (West sector) part of the hotel have been undergoing a revamp, which should be complete by September. Painted bright orange and turquoise (you can’t miss it), both buildings have seven floors, each with a different colour scheme in the rooms (brown, green, blue, orange, grey, gold and purple). Reception has a blue LED frontage and a mosaic floor – the look and feel of the place is quirky and design-led.

Staff are dressed in Levi’s denim uniforms, the men’s public urinals are shaped like mouths and corridors are covered in paintings and posters. It’s not your typical business hotel so will likely appeal to a younger audience. The amenities are good, though, wifi is free and rates are affordable. On Hanauer Landstrasse in Frankfurt’s Eastside, not far from the new European Central Bank headquarters. The long road is also home to numerous car dealerships. There is a tram stop (take the number 11) outside, and the Ostbahnhof subway station down the road. Frankfurt airport is less than 20km away.

Originally, all rooms in the older East side of the hotel were completely different – each reflecting the story of a real-life person in some way. But after the revamp they will be more in line with those in the West wing that are less eccentric and with more unified palettes, fixtures and fittings. That said, each one in the West wing is named after a famous person who has influenced the world in a positive way (Peter Benenson, founder of Amnesty International, for example) and there are subtle artworks to reflect that.

Bedrooms range in size from 22 sqm to 30 sqm and all come with a clothes rail, minibars, safes, workdesks (some bigger than others), iHome docks, LG TVs, and queen or twin beds with EU sockets either side (handy). Bathrooms have walk-in showers (no tubs), and large dispensers of shampoo and shower gel. All windows open but are double-glazed (ask for a room at the back if you want guaranteed peace) and there is also air conditioning.

L rooms are a little bigger, have king-size beds, tea and coffee-making facilities, and a sofa. Breakfast is served in the lobby-level bar area where there is tea, coffee and juice laid out on the counter, and a buffet around the corner. There is a nice selection of bread, pastries, cheese, hard-boiled eggs, fruit, yoghurt and cereal. Everything is self-service. It was pretty quiet in the evening when I passed through on my way to the lift although it looked like a welcoming place to relax with a nightcap. I didn’t try the restaurant, which faces the street, but it looked vibrant and fun. The menu describes the dishes it serves as being a mix of regional and seasonal with a Mediterranean influence. if you want to eat in your room, you have to call and order a meal from the restaurant before popping down to collect it. The Goldman has two dedicated event spaces: the 80 sqm Freiraum, which has natural light and space for 20 delegates boardroom-style; and the 48 sqm Living Room, which also has daylight and can accommodate up to 30 people for a reception.

It also has a door opening on to the street so people can step outside for a smoke. Events can also be held in the ground-floor restaurant and bar. There is a roof terrace on the first floor. There is no on-site gym or pool but jogging maps can be got from reception and there are towels, wrist bands with pockets for room keys, apples and water in reception.

The hotel also has an agreement with a nearby Fitness First allowing daily access for €8. There are half a dozen free bikes to rent, and BMW Minis to borrow on a first come, first served basis.

Just off the lobby is a boutique selling Freitag bags, magazines, bed linens, toys and kitchen utensils among other things.

If you are looking for an alternative to the big international chains in the city, this is a good choice. It’s a colourful hotel full of character, but it’s not full service. It does have plenty of perks though, and many business travellers will find it suits their needs for a short stay. The staff are friendly and the vibe youthful.

PRICE Internet rates for a midweek stay in September started from €153 for an M Room.