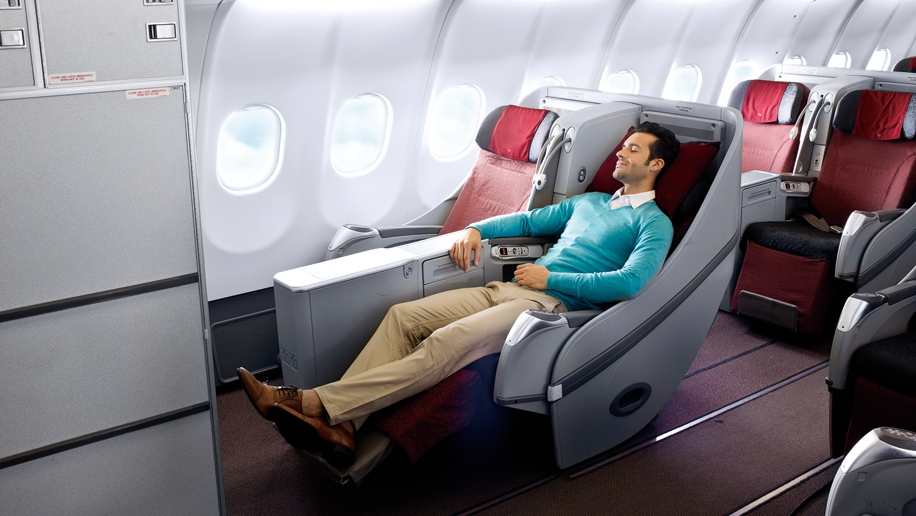 I arrived at Soekarno-Hatta International Airport (T2) at 0735 for my scheduled 0935 flight to Hong Kong. Garuda offers a dedicated check-in area for first and business class passengers (most airlines only extend such privileges to first class customers). A check-in attendant took me to a small sitting area while my passport and checked baggage were processed, then personally led me through a premium class-only immigration zone to the airline’s lounge.

The Garuda Indonesia Executive Lounge could do with a refresh, but the service is outstanding. There are plenty of seats, some of them foot massage chairs, plus shower rooms, a bar and a live-cooking station where eggs can be ordered as you like them. The buffet selection was respectable, especially given the early morning visit, and the lounge overlooks the tarmac, benefiting from plenty of natural light.

After complaints that they are disruptive to passengers, Garuda no longer makes boarding announcements in the lounge. At 0910 I made my way to gate E1, where boarding had already started, and was on board a few minutes later. An attendant offered to hang my coat, and on my seat I found a pillow, blanket and amenity kit featuring L’Occitane products (the latter on a mid-haul flight is unusual, but welcome).

A welcome drink was offered, and I was recommended Garuda’s signature martebe juice – a mix of passion fruit and Tamarillo, rich in vitamins and a popular tropical drink from North Sumatra – which was delicious.

Business class on the A330-200 is separated into two cabins, each containing 18 seats in a 2-2-2 layout. I was allocated aisle seat 7C, with no one sitting beside me. This was one of Garuda’s older A330-200 seats, but it is still a quality product that compares favourably to other regional business class products.

The angle-flat seat can recline to 165 degrees – perfectly fine for a mid-haul flight during the day. It also offers business-friendly amenities including individual charging ports, a coat hanger and reading light. On this older business class product a small IFE screen flips up from below the armrest, and the back of the seat in front contains a magazine pocket. (The newer business class seats feature larger screens positioned in the seat back.)

Seat controls are located on the armrest and are intuitive, if a little laborious to use. Reclining the seat into its full angle-flat position requires holding down the “bed” button – increasingly difficult as the seat reclines more and more.

The aircraft pushed back at 0940 and took off five minutes later. The in-flight entertainment selection was fairly limited and uninspiring, with most movies well past their release date. Lunch was served at 1120 and featured smoked salmon, followed by a main choice of beef teriyaki, stir-fried snapper and prawn with oyster sauce, or roast chicken with black pepper sauce, and chocolate cake for dessert. The appetiser and main course were individually served and the restaurant-style service was a nice touch.

The dishes were beautifully presented, and the quality was excellent – my snapper and prawns, with steamed rice, sautéed green beans and soybean cake, were juicy and not overcooked, while the umami-rich oyster sauce added a savoury element. After the meal I benefited from another recommendation – a 99 per cent oxidised purple oolong tea from Sumatra that was full of flavour but not too strong. The rest of the flight was uneventful and I managed to grab an hour’s sleep.

A high-quality flight that showcased the progress Garuda Indonesia has made over the past few years. Even using the older business class product it was an excellent overall experience.