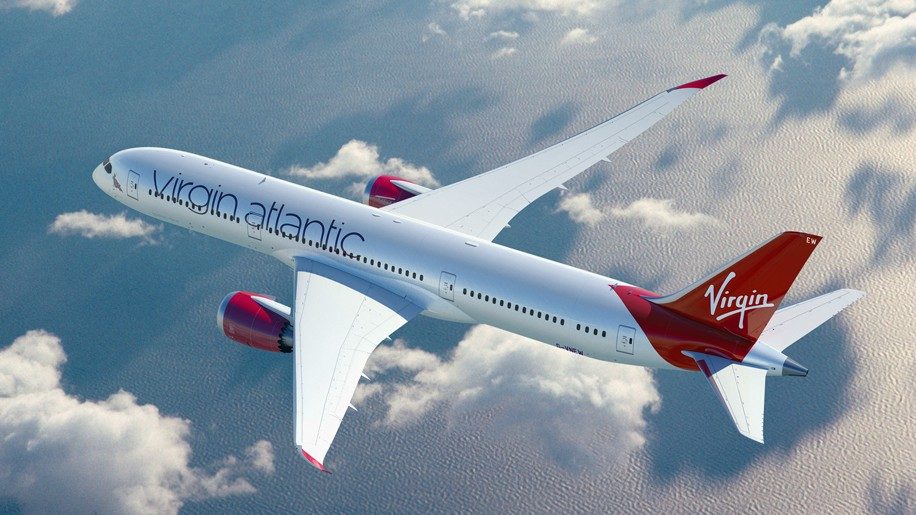 This is a review of the overnight flight from London Heathrow Terminal 3 to OR Tambo International, Johannesburg, flight VS601, a flight of 10 hours and 30 minutes.

The flight was departing at 1855, but I arrived early  (around 1500) at London Heathrow for the flight because I wanted to review the Club House, Virgin Atlantic’s award-winning lounge at Terminal 3.

You can read that review below

Boarding was called from the Clubhouse Lounge at 1810 and it was a five-minute walk to Gate 20 where boarding had commenced. A priority line for business class (and gold card) saw us walk straight through and through the gate area to board immediately.

We were welcomed on board at the bar area by smiling flight attendants, who showed us to our seats. This was a busy flight. Previously Virgin was flying with a B747-400 on the Jo-Burg route, so on the plus side having the B787-9 means its best seating and aircraft is on the route, but on the down side also means there is less availability, since the aircraft seats fewer passengers than a B747-400.

Once at my seat I started to work on my laptop reasoning that I’d have time to get some last emails sent before departing (Virgin has wifi on board once in flight, but since this was a night flight I didn’t intend to use it). While I was working I was offered a choice of drinks – champagne, orange juice or water.

The amenity bag was waiting on the footstool, and this contained an eye mask, socks, toothbrush and toothpaste, ear plugs, lip balm, pen and tissues. Also at the seat was a bottle of water and, in the recess below the IFE monitor, a universal plug socket, a set of noise-cancelling headphones, and a touchscreen remote that could also be used to watch films on.

The Dreamliner is configured for 264 passengers, with 198 in economy (a Recaro 3620 seat with 31 inches of legroom), 35 passengers in premium economy (Zodiac Reverb with a 38-inch pitch) and 31 in business (a Zodiac UCS3).

Business class is in one cabin with seat rows from 1 to 11 in a 1-1-1 configuration (A-G-K), apart from in the centre where the seats run from rows 1-9 (because of the bar behind). I was right at the front in a window seat 1A.

You can read a previous review of the cabin here.

It’s a year or so since I last flew onboard, but first impressions remain. The Upper Class seats are the same style as on existing Virgin aircraft, but there are small design touches including smooth contours, unmarked moulded shells “with geisha white paint with a mica finish” and a sort-of mesh fabric covering the interior panels. The leather is a dark, aubergine “espresso” leather. It’s a clever updating of what now qualifies as a classic design. I know a lot of Virgin passengers must be very design-orientated, and enjoy the small touches the airline makes.

For flyers such as myself (more interested in whether I need an adaptor for the plug in the seat), it’s more a matter of being aware that despite having been around in this basic form for many years, the seat and the cabin still looks good. There are quirks – the small drinks table is in a strange position, too far back for it to be comfortable to place drinks on (or remove them from), and of course there’s the fact that the seat is still one that flips over (see below), but the herringbone configuration which gets its name from the look of the configuration when viewed from above is still an effective solution to fitting fully lie flat beds into the cabin.

The focal point of the cabin is the redesigned bar, a design collaboration between the Virgin Atlantic in-house team and VW&BS and manufactured by Altitude. It has a white Corian worktop, and both coloured and white LED lighting, while the bar has textured back-lit panelling, four stools and an interactive TV screen in the bar which can show events or, in our case, the flight’s progress.

The benefits of the Dreamliner are many – including the ability to create interesting and atmospheric lighting effects on board. As you can see from the few photos I took, the theme might be “very purple”.

Seat 1A on the Dreamliner – in a very purple light

Which is the best seat?

I was in 1A which I would not recommend. IT’s true that the washrooms are at the back so there is a limited footfall, but it is still where the food is prepared and where the flight attendants gather. instead I would go for a window seat mid-cabin. I took 7A on the way back. It has no windows but was a good choice for sleeping on the return since it was both away from the front and the rear bar.

The amenity bag was waiting on the footstool, and this contained an eye mask, socks, toothbrush and toothpaste, ear plugs, lip balm, pen and tissues. Also at the seat was a bottle of water and, in the recess below the IFE monitor, a universal plug socket, a set of noise-cancelling headphones, and a touchscreen remote that could also be used to watch films on.

Sleep suits were available on request and since I was wearing a suit I changed into mine immediately and my suit and shirt were hung for me. We took off on time

As mentioned previous, there was wifi available through Panasonic Avionics and T-Mobile which I did not use. This was priced at £14.99 for the journey with service provided by

The Dreamliner is a lovely aircraft, and the windows provide good views out, although on a night flight like this the windows were dimmed shortly after take-off and stayed that way for the entire flight, so the effect was slightly diminished.

This made sense when people were sleeping but meant the cabin was quite dark (or atmospheric, if you like) for the whole flight until about 50 minutes before landing when they were fully undimmed, making it hard to work on my laptop since it was shining straight onto the screen (I pushed a duvet up against it as a block to the sunlight).

The inflight entertainment is viewed on an 11-inch monitor, larger than it seems since it is quite close to you with this design of seat, compared with other designs where it is attached to the back of the seat in front.

The system had a what I think you’d have to say was a small choice of films — 60 — although there were some new releases on there I had not seen, 70 hours of TV shows, 285 albums, games, a sky map, USB connection, travel health tips, and seat chat function.

Shortly after take-off the bar opened, drinks were offered and orders taken for food.

This is a long flight, and we had set off in the early evening, but food was fairly slow getting out to us beginning at 2100. I had the starter and main course (salad and then the curry) but didn;t have the pudding and then wanted to sleep.

As regular flyers will know, the main characteristic of the Virgin seat is the way it flips over so you have one seat cushion for sitting on and another one for when it is a bed. For some passengers this is a real hassle, for others it’s worth it for the more comfortable sleeping experience. Virgin must be convinced that it’s the way to go because they kept these seats (with improvements) through all new aircraft deliveries including the A330 and B787-9. When it was time for sleep several passengers were also having their seats flipped by passengers and their beds made with a white cover blanket for the mattress and then a duvet and pillow. Rather than wait I did it myself and then lay down to go to sleep, using the ear plugs and eye mask in the amenity bag.

I slept well, waking a few times during the night. If I’m truthful, there was noise – chatting and laughter – audible from the galley during the night, but it wasn’t loud enough to keep me awake.

About 90 minutes before arrival I could hear breakfast being served around me, so I got up, flipped the seat back again and had a bacon sandwich and some yoghurt and fruit along with a cup of tea and then got changed back into my suit.

We landed on time at Johannesburg Airport where there were long queues at immigration (about 25 minutes). By the time we got to the baggage carousel our bags were arriving.