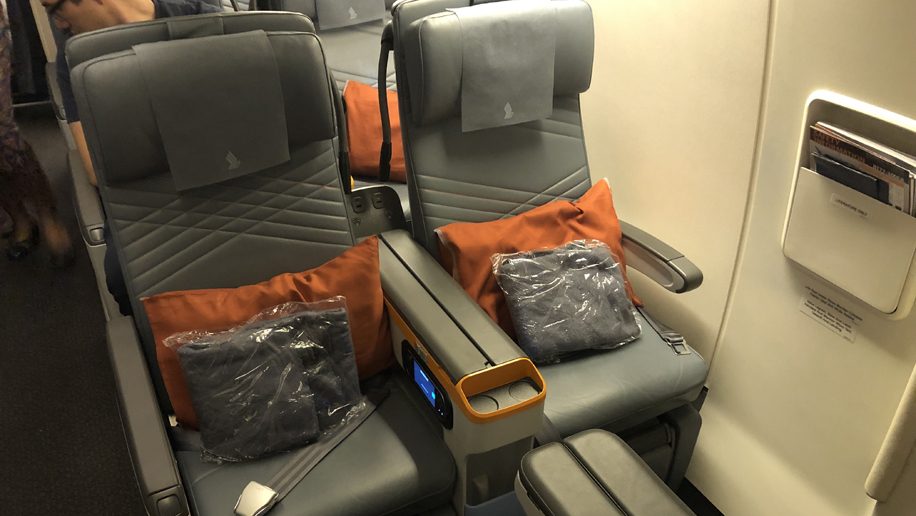 At the end of September, I was flying to Las Vegas for a conference and was booked in premium economy on Singapore Airlines’ Boeing 777-300ER, so was interested to see how this compares to flying on the A380.

This premium economy product was developed at a cost of US$80 million and first launched in August 2015 on the Singapore-Sydney route, followed by the Singapore-Hong Kong and Singapore-London routes.

The design was overseen by long-time SIA collaborator JPA Design, while manufacturing was split between ZIM Flugsitz GmbH for the A380 and B777-300ER, and Zodiac Sears for the A350.

Singapore Airlines has a good overview of the features available in its premium economy class on its website here.

I checked in at the In-town Check-in area at Hong Kong station. There was no queue for the Singapore Airlines counter, which is also shared with Finnair. The check-in attendant was polite and helpful. She helped me change my seat to a more desirable left-of-centre aisle seat, rather than my original seat which was situated in the less desirable middle four seats of the premium economy class cabin.

I then proceeded to take the Airport Express, which whisked me to the airport in 24 minutes. 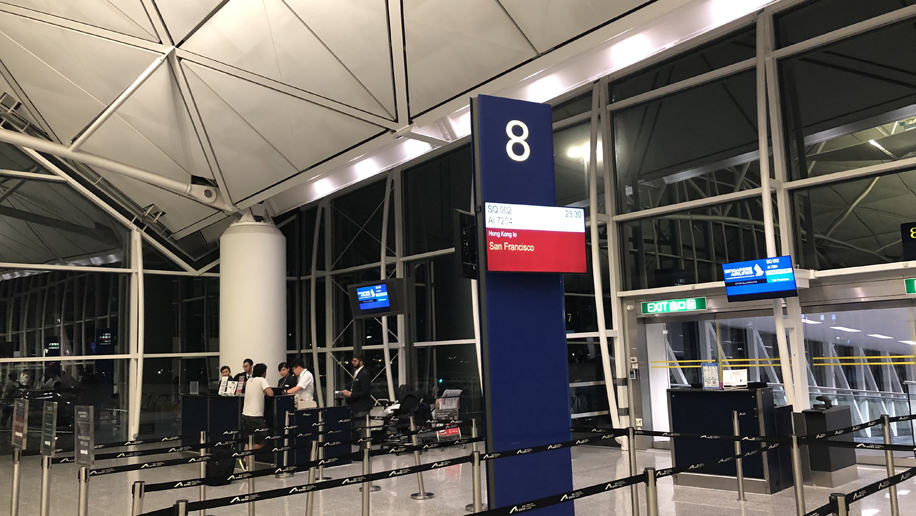 After scanning my passport and boarding pass at the e-gates at the north security gate, there was a short queue for security, which I cleared without issue. I then inserted my Hong Kong identity card into an electronic reader, scanned my thumbprint and had cleared immigration in less than 10 seconds.

Boarding was at Gate 8, where I was able to sit down in the public seating area and wait for the flight to start boarding. When it did, boarding was done in several orderly lines. Premium economy class passengers have their own line and are able to board after business class passengers. 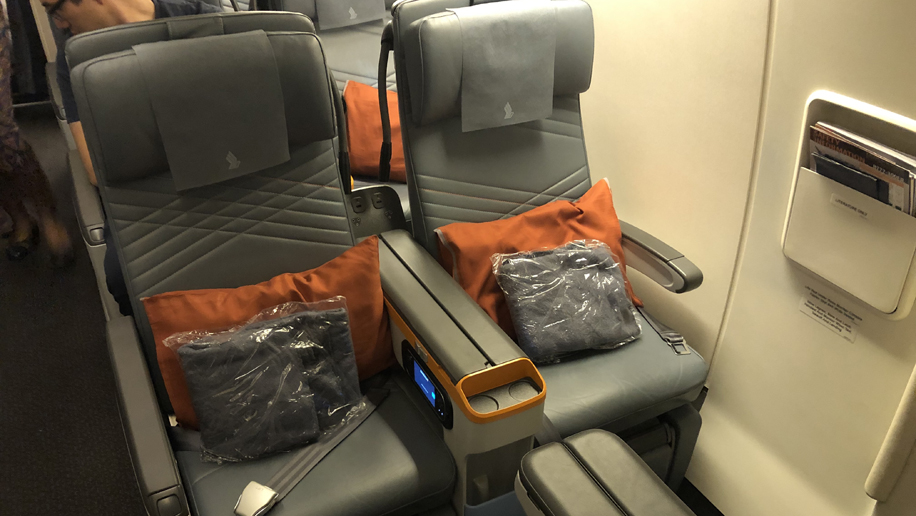 I was in seat 31C, an aisle seat in the emergency exit row with unlimited leg room. Usually, in order to pre-book these seats you need to pay for them, so I was pleased that I had been assigned this seat without additional charge. The premium economy cabin was not very full, and some passengers moved around the cabin to more desirable seats after takeoff.

A calf-rest and foot-rest is built right into your seat. Also built within the seat are two USB ports and a personal reading lamp that has three different brightness settings that can be adjusted by pushing a button on the lamp.

Since my seat was in the front row, my 13.3-inch HD enabled touchscreen monitor was stored in a compartment in front of the seat. 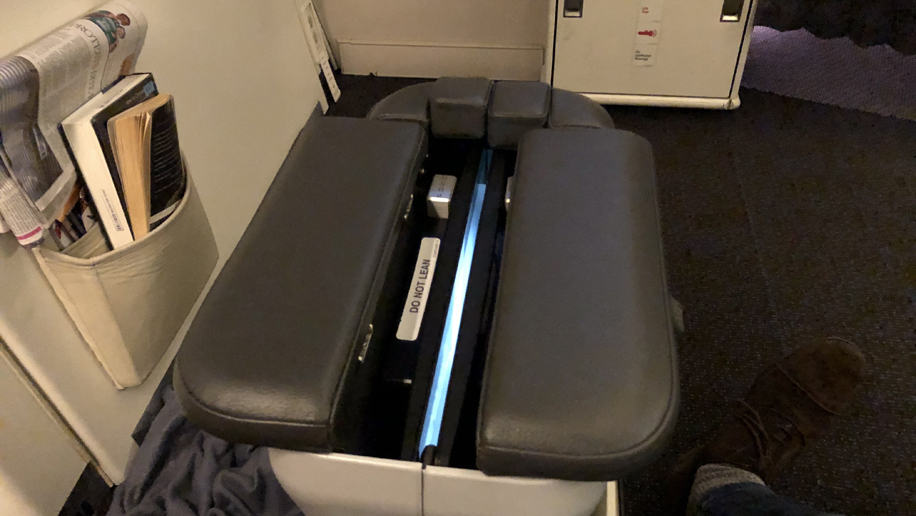 I had a little trouble working out how to remove it, but I asked a cabin attendant for assistance and he deftly popped it out. 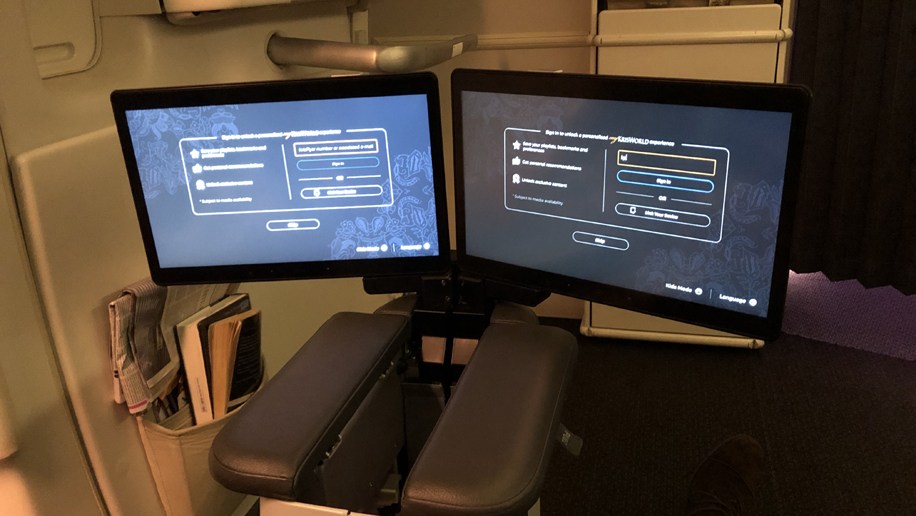 In premium economy class, you get the same noise cancelling headphones that you get in business class. However, I was a little disappointed to find that only one ear of the headphones actually worked. I could have asked a cabin crew member to swap them out for me, but since I only watched one movie during the entire flight, I didn’t bother. 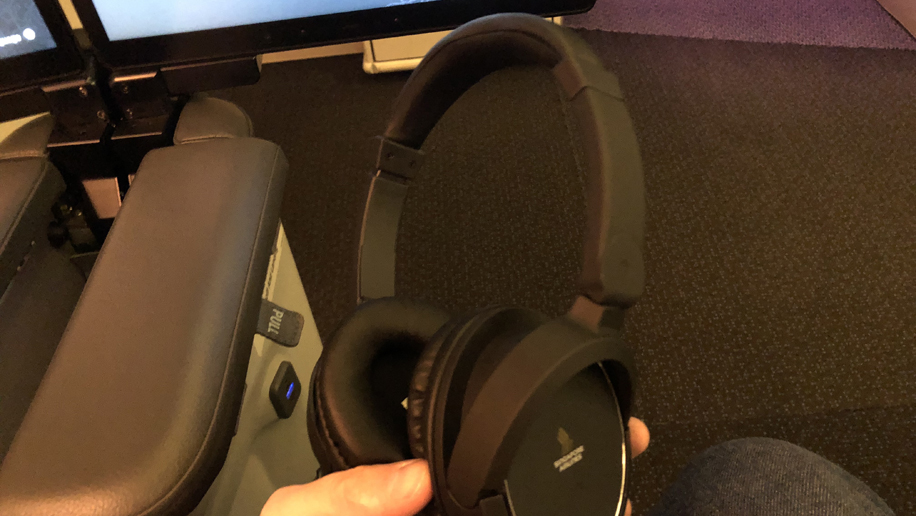 If I had been less tired, I would have watched a lot more movies, given that the selection here is very good. 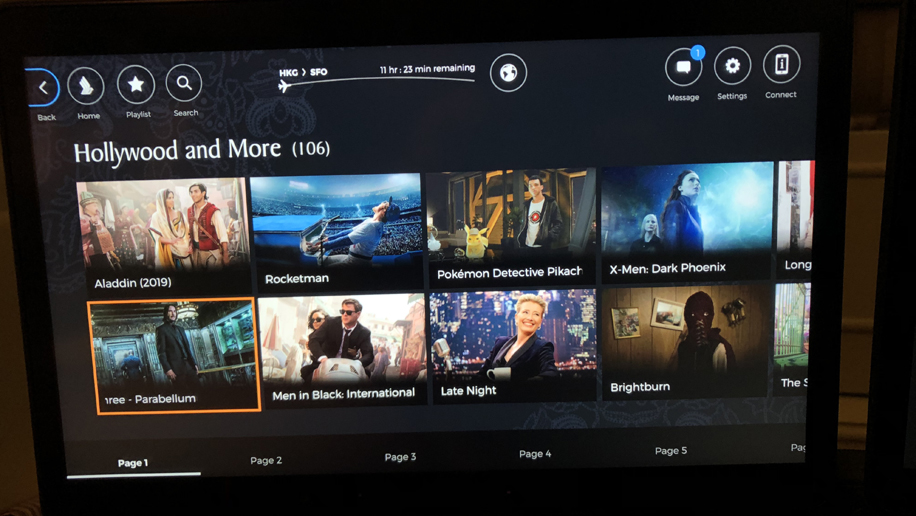 The premium economy class cabin on this aircraft is laid out in a 2-4-2 configuration. If you are flying with a friend, partner, etc., the two seats on the left or right of the aircraft are, without question, where you want to sit. You get considerably more privacy as you don’t need to sit next to any strangers.

I can’t really see any advantage of sitting in the four middle seats, and I imagine if you had paid a premium for this fare class and were forced to sit in this part of the cabin you might be disappointed. Indeed, I saw one passenger who appeared frustrated with his seat (an aisle seat in the middle of the “4” section) and after takeoff upgraded himself to an empty extra leg room seat at the front.

I was impressed by the menu presentation. Premium economy class passengers get their own menu different from the standard economy class one. It goes a long way to making the experience feel more exclusive and separate from economy class.

This flight also offers a “book the cook” service, which I neglected to take advantage of. You can find the menu for that service here. 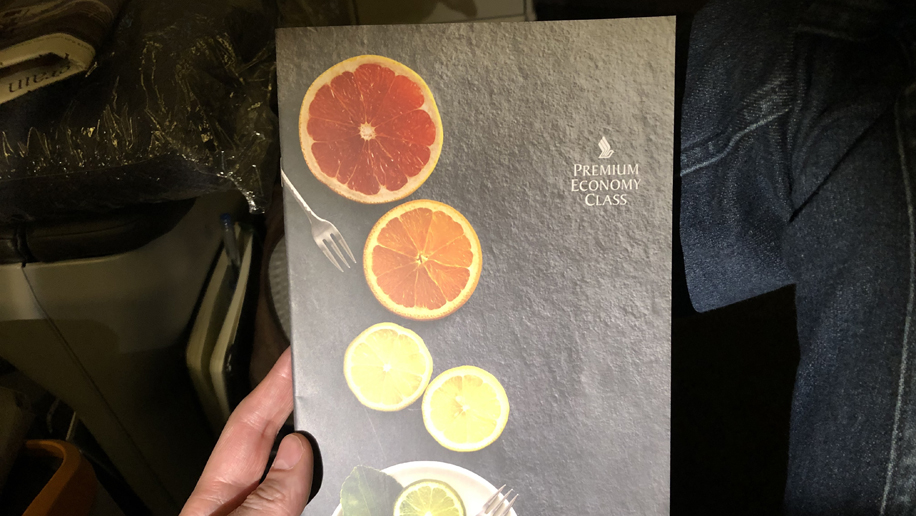 I decided to go for the Indian selection, which I thoroughly enjoyed. The meal was even rounded off with a plastic tub of cardamom seeds and sugar. 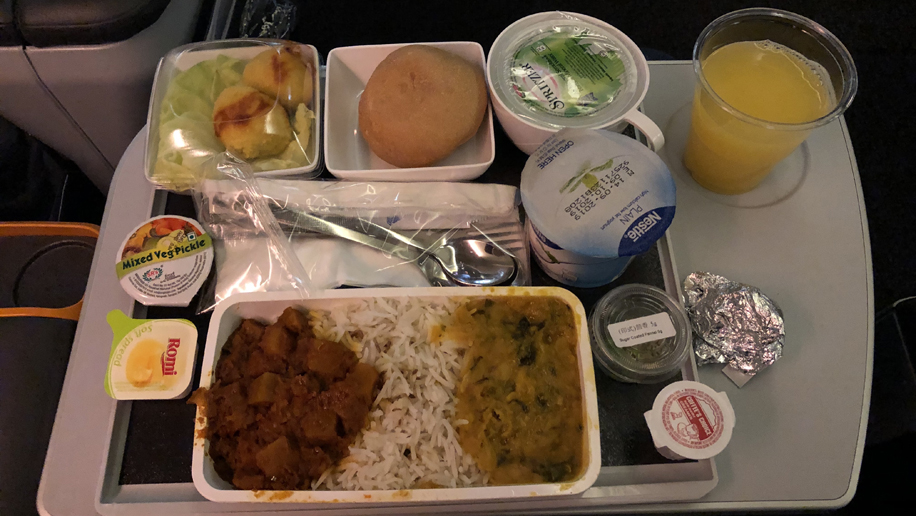 For dessert, I got a tasty tub of strawberry cheesecake flavoured Haagen Dazs ice cream. Unfortunately, there was no choice of flavours, but I was happy with this one. 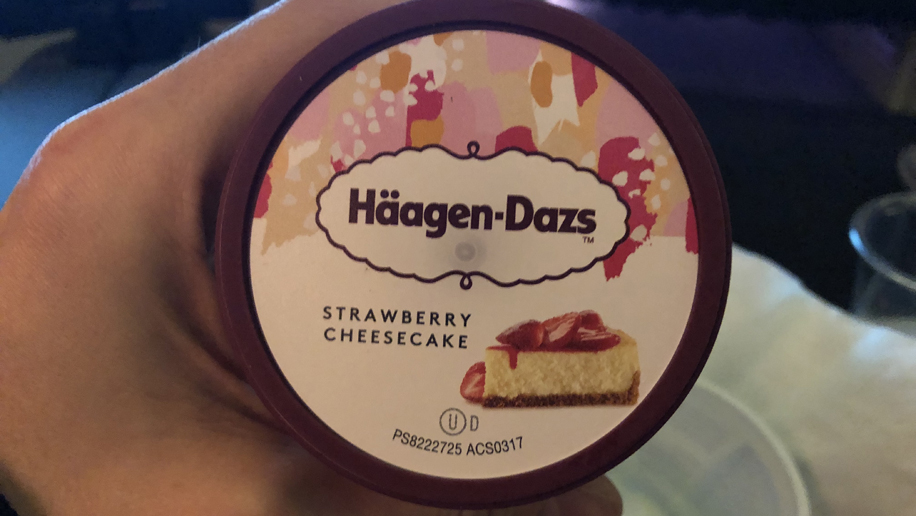 If ever you get hungry throughout the flight in between meals, you can go to the galley to select various snacks. Singapore Airlines calls these “delectables”, which seems a little over the top for sandwiches, bags of crisps, chocolate bars and apples. They did the job though and saw me through till breakfast. 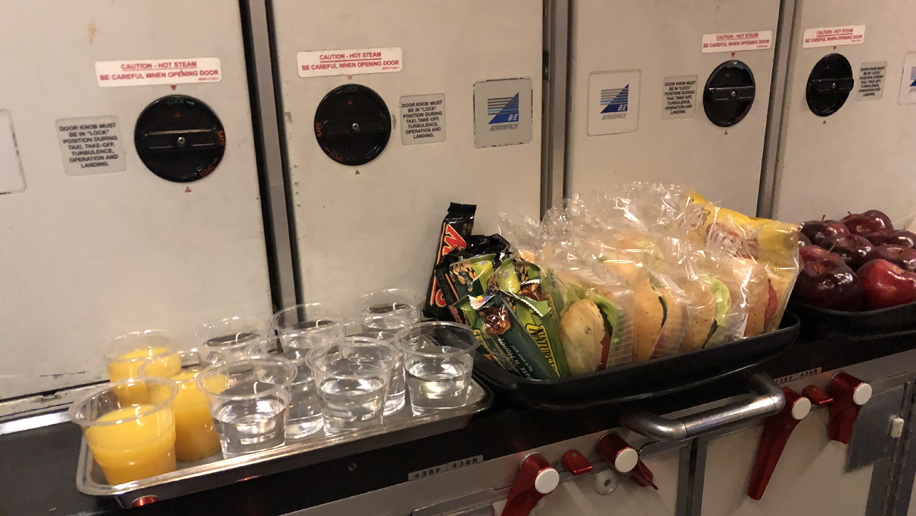 After the meal, I finished watching my movie and then reclined the chair to sleep. It took me a while to get comfortable. The recline on this seat is more than in economy, but it’s still not enough for someone who is quite particular about needing to lie down to sleep like me. Still, after a while, and with the help of a neck pillow, I did manage to get a reasonable amount of sleep.

The good thing about this flight’s timing is that, since it lands quite late in the evening, you’re unlikely to need to have meetings as soon as you land. If you do end up not getting enough sleep on the plane, you can just sleep once you get to your hotel.

Breakfast was served about one-and-a-half hours before landing.

For the main course, I chose the cheese scrambled egg. Overall, it was a decent breakfast, though it was strange to have breakfast at what was dinner time San Francisco time.

A note on the service on this flight. Service was almost always extremely courteous, and I would describe the cabin crew’s attitude as upbeat and even jolly. There was one instance when I asked for a glass of water and the cabin attendant unsmiling said “Ok, I’ll bring it to you”, which contrasted badly with the polite and respectful attitude I’d received from her colleagues the rest of the flight. Still, it’s a long flight, and cabin crew are only human, so I can let this one instance of somewhat unsatisfactory service delivery slide.

I also saw instances of cabin crew going above their duties to make sure passengers had a good experience. One cabin crew member allowed a mother to photograph another cabin crew member holding the mother’s baby. Presumably, this was the baby’s first flight and the mother wanted a memento. 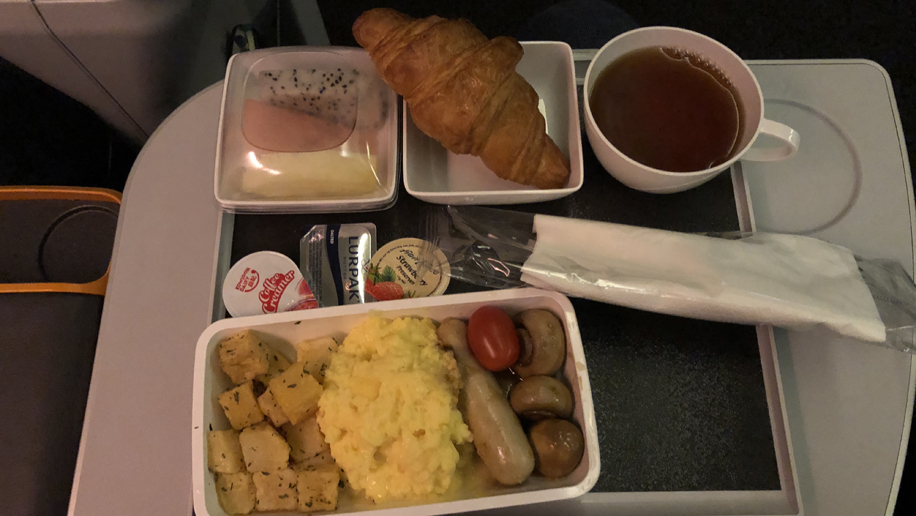 Probably the most useful way of assessing a premium economy product is whether it is worth paying the extra to upgrade from economy class. If you can secure the unlimited leg room seat that I did, I would say in this case it is worth it. There were enough touches that make this product different enough from economy class that it feels special: the noise-cancelling headphones, the distinct menu, the larger IFE screen, etc.

True, it’s unlikely that you’ll get a fully satisfying sleep in this seat. If that’s what you need, you’re going to have to book in business. But I did sleep reasonably well, and as mentioned above, the timing of the flight ensures you’re able to go to bed again shortly after landing. 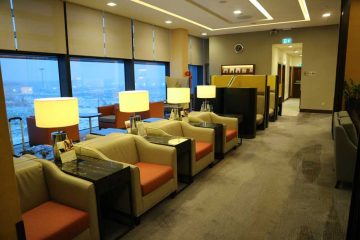