Singapore Airlines flies from Singapore to Frankfurt, and after a short period, then flies on to New York. This is a Fifth Freedom flight, which is when an airline flies from another country (not its own) – Germany in this case, to a third country (the US).

I arrived early for my 0835 departure on Singapore Airlines flight SQ26 from Frankfurt to New York, a flight of eight hours and forty minutes.

I was dropped off at Terminal 1 by the Hotel Shuttle Bus, which serves the Hampton by Hilton, the Holiday Inn and the Park Inn, all new hotels in a business district nearby called Gateway Gardens just after 0600.

Once inside the terminal, a big board told me that the check-in zone for Singapore Airlines was zone C.

Check-in was swift, with dedicated lines for economy, premium economy, business and the first suites. The check-in agent told me that I had a choice of Lufthansa lounges or the Air Canada Maple Leaf Lounge. I then went to security, which at this time was almost empty, and decided on the Air Canada lounge.

The Air Canada lounge seemed very spacious at this time of the morning when almost empty, with high seats gathered around tables close to the eating area and then several distinct areas, with walls marking the division rather than just screens or plants.

The lounge offered both hot and cold food, a good selection of drinks, and has views out to the gates where at this time, there were Ethiopian Airlines, Air Canada and South African Airways aircraft.

Facilities include showers, though I did not see these. The lounge lacks plug points, although there are some in the floor. I had a good breakfast and then waited for boarding, which came at 0805. 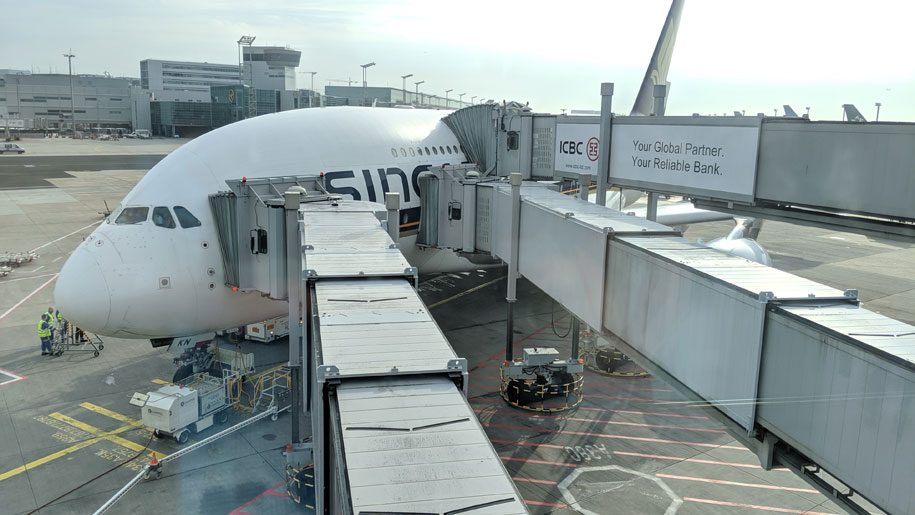 This was at Gate B46. Since this was an A380 it was quite busy, but again, boarding was done by classes and there were dedicated queues for each one so it was organised. I was selected for additional security, which added a few minutes to the process since I had to be scanned once again and had my laptop swiped for explosives. I then went on board directly to the upper deck, was greeted, found my seat, had my jacket hung and was offered a selection of drinks including juices and champagne. 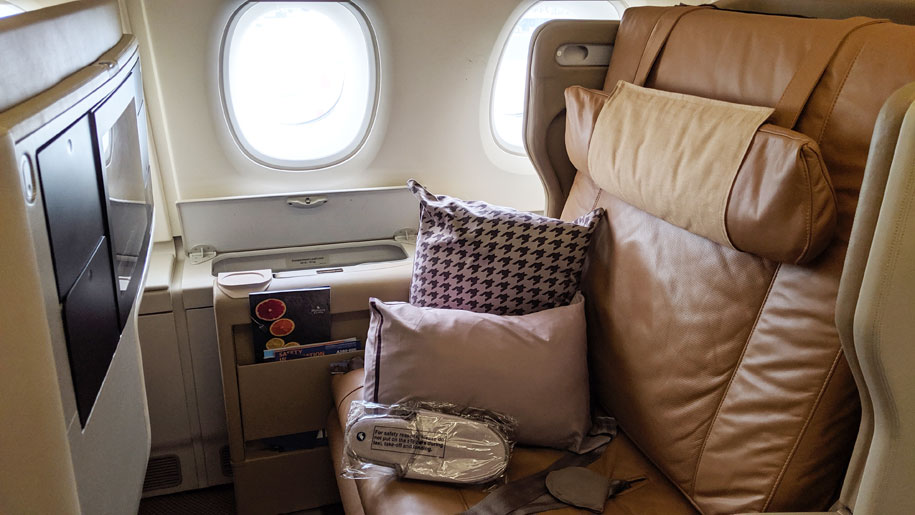 Singapore Airlines has been flying the A380 since 2007, and has 19 of them in its fleet, but the oldest five have been returned and “swapped” with five new ones. These new ones have a brand-new business class, though at the time of writing these are only on a few routes such as Sydney and London. The remaining 14 A380s with the old seating products will gradually be retrofitted, so this may well be the last time I fly this configuration.

It was good to be reminded of this, especially since its was just a few days before I tried the new A380 business class on a flight from Singapore to London. For a review of that flight see:

Business class is split across two cabins with washrooms between them. 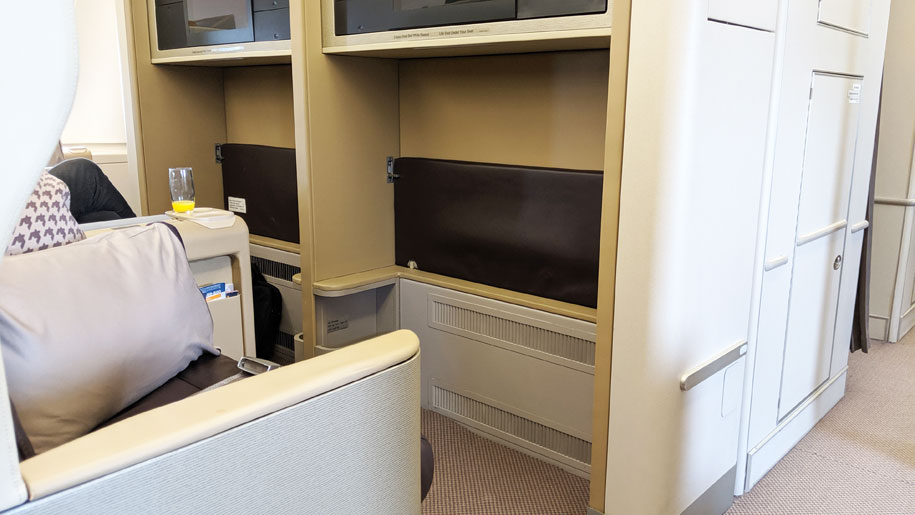 These seats are very comfortable and very wide – 30 inches and there is a large cushion as well as a back-bolster cushion, so you can use this to help wedge you in (if that’s what you’re after). I said in a previous review of this seat that it is so wide you can sit cross legged if you wanted to (admittedly a niche wish, but when you fly a lot it makes a change).

There is a head cushion which can be adjusted by slipping it up or down two leather straps which are attached to the seat, though I found it fell down whenever I leant forward and ended up around my shoulders.  This seat requires you to flip it to turn it into a bed, which isn’t ideal, especially when you just want to doze for an hour or so on a day flight like this one to the East Coast of the US. 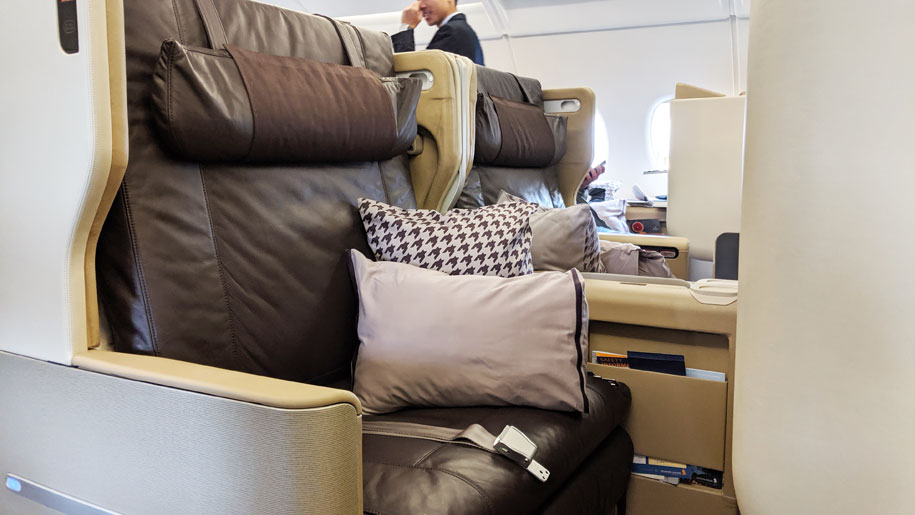 The IFE screen is 15.4 inches, and there are several push button compartments, two on one side, three on another, hiding everything from a storage panel for mobile devices to a drinks tray and a small vanity mirror.

All of this is fine, but you’ll know when the person behind you is exploring these options because as they press the catches to open them, the vibration comes through the seat, and the same applies for the IFE screen – people have heavy hands, or fingers, and it disturbs you. I had an older man behind me who was continually banging the back of my seat as he tried to work the IFE screen, and it was very disturbing. There’s a hand control for the IFE in the arm of the seat, but perhaps he didn’t use that, and there are also some good noise cancelling headphones.

Working and charging devices is easy. The table is good and large and supports a laptop without vibration, even while typing, and there is a power socket in the seat in front (you’ll know when someone plugs it in behind you) as well as two USB sockets and some other sockets including what looks like an ethernet socket. 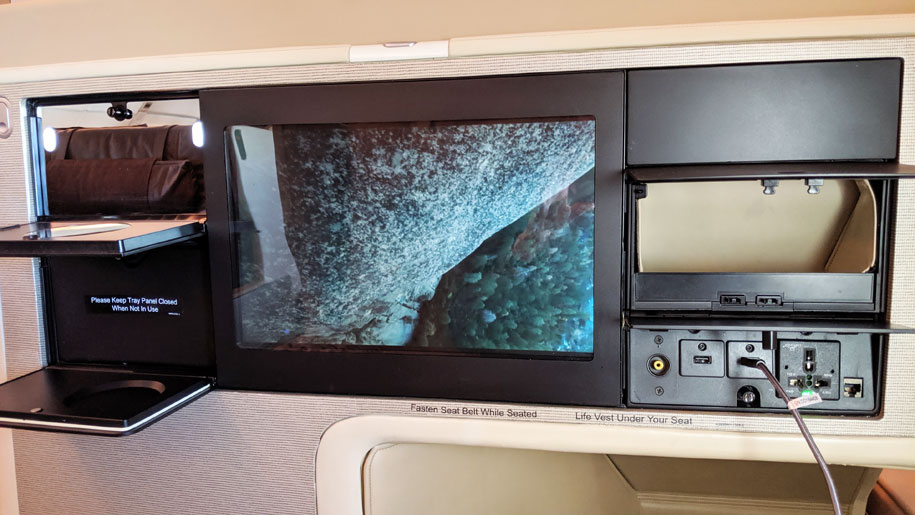 The window seats have a side storage compartment which is very useful, but have no overhead lockers meaning you put your larger bags over the centre seats – this is probably more of an inconvenience for the passengers sitting in those seats than for you. There isn’t much of a view from the seats in the back cabin since it is obscured by the wing, though the wings of an A380 are fairly mighty to behold. 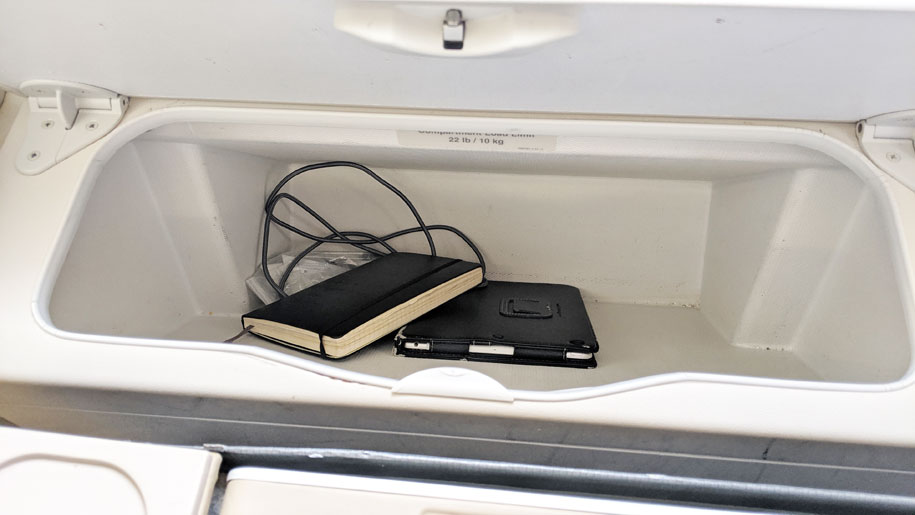 Wifi is available throughout the aircraft. Premium classes get some allowance for free but then pay. First Class gets 100MB, business class gets 30MB. Thereafter it is charged. See below. 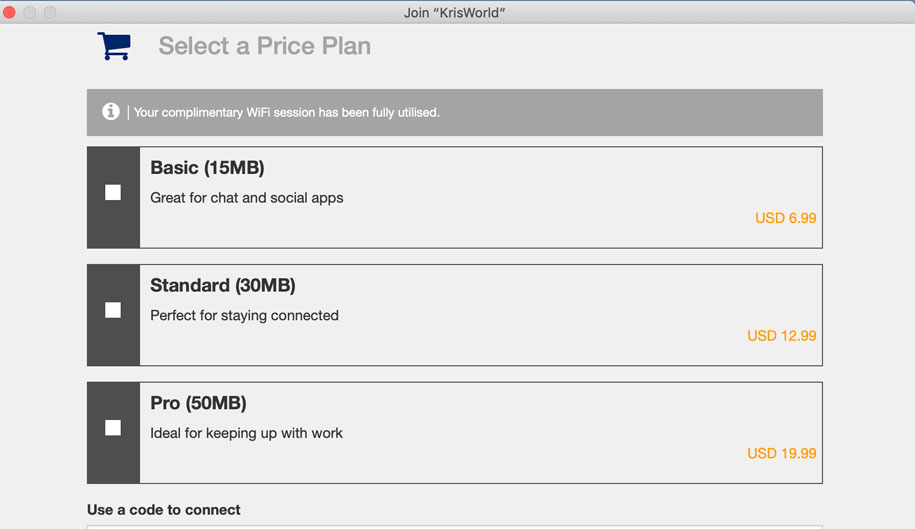 I was working but didn’t buy this because the 30MB on my phone was used up in five minutes with only my email open – no other apps, and so I reasoned I’d burn through 100MB very quickly when working on my laptop. 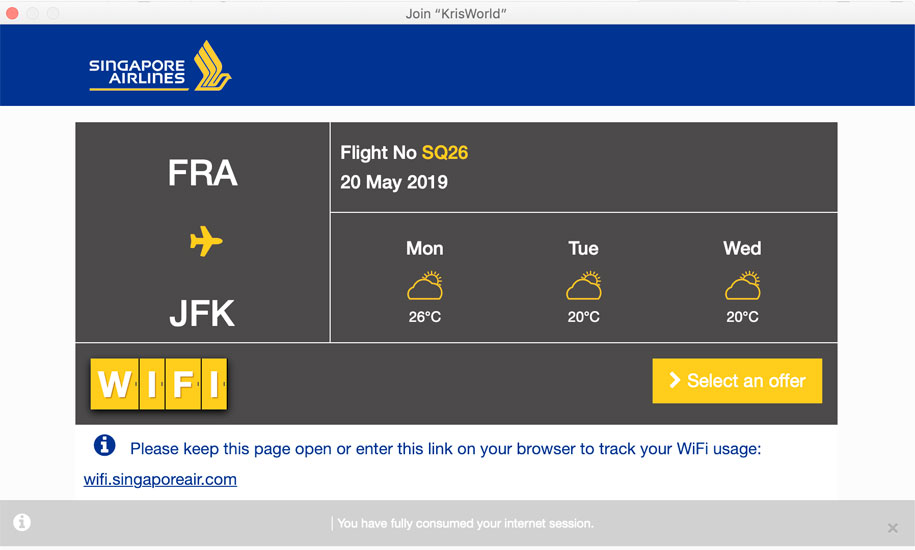 The first drinks and food were served together over an hour after departure. Passengers on one side of the aircraft were served a good 15 minutes before our side.

Since it was morning in Europe, there was a brunch menu followed by a lunch menu later in the flight. For once I had got myself organised and Booked the Cook a few weeks previously, which had given me a wider choice than that detailed on the menu, but I will make a note of that below.

The flight was around half full in business class, which meant that when I was working I was asked whether I would l like my meal served at another seat so I could keep everything laid out at my seat. I don’t imagine the flight attendants on many other airlines would make that suggestion. During the course of the flight I must have been offered hot (or cold) towels at least four times, and certainly before each of the two meals, and the level of service was as high as I’ve known it on any airline.

There was a slight problem with recessing the table back into the arm when I wanted to sleep, so another seat was used for that and I then had one seat for sleeping and another for working at. It was all seamlessly done and dozed for a couple of hours, barely disturbed other than by a man who had a habit of clearing his throat extremely loudly in a way that seems culturally normal in some countries, but would clear a room in another.

About two hours before landing there was another round of hot towels and then lunch was served. 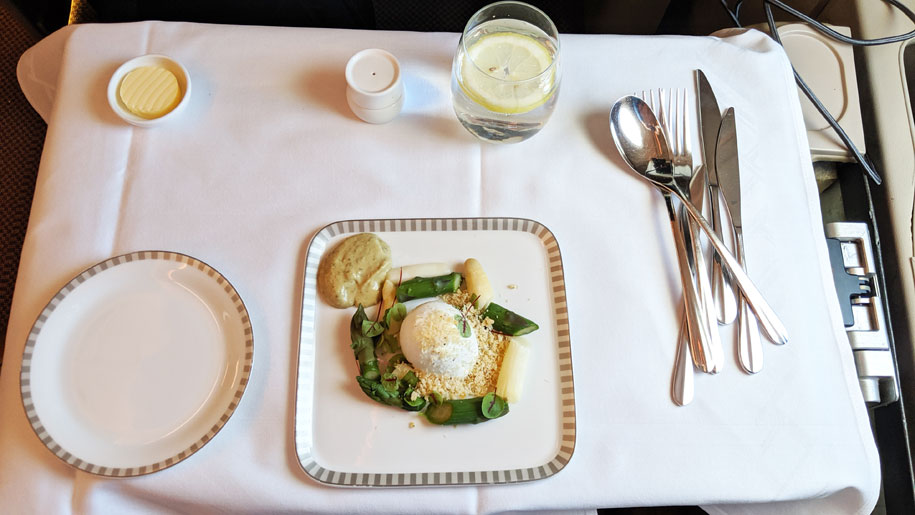 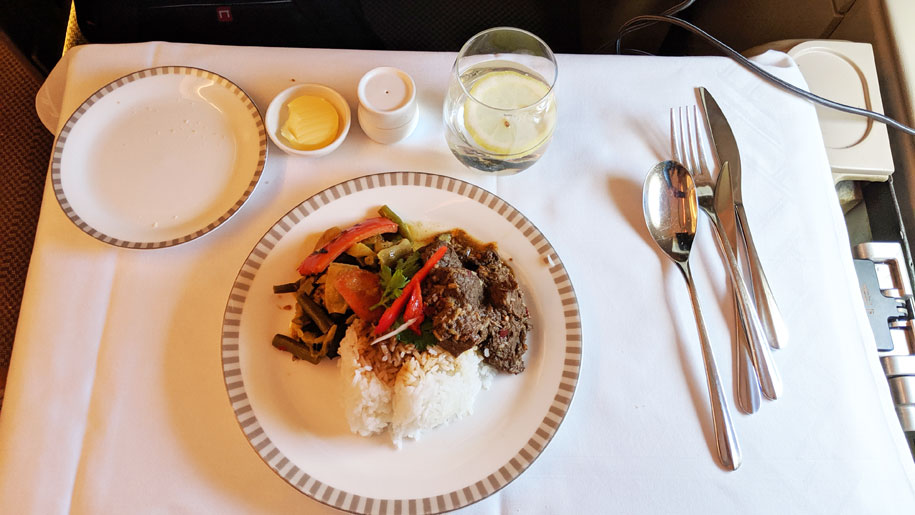 The wine list takes some detailing because they have alternatives on it, so I’ve jotted it all down, but note the ‘or’ which means you won’t have both options on the flight.

Since this was a flight out there was a German white and a German red, and I tried these two, since I’d not had either of them before.

In addition, the red wine was a Pinot Noir Jean Stodden JS Spatburgunder from the Ahr region, “one of Germany’s least-known and northernmost wine regions” as detailed on the menu. 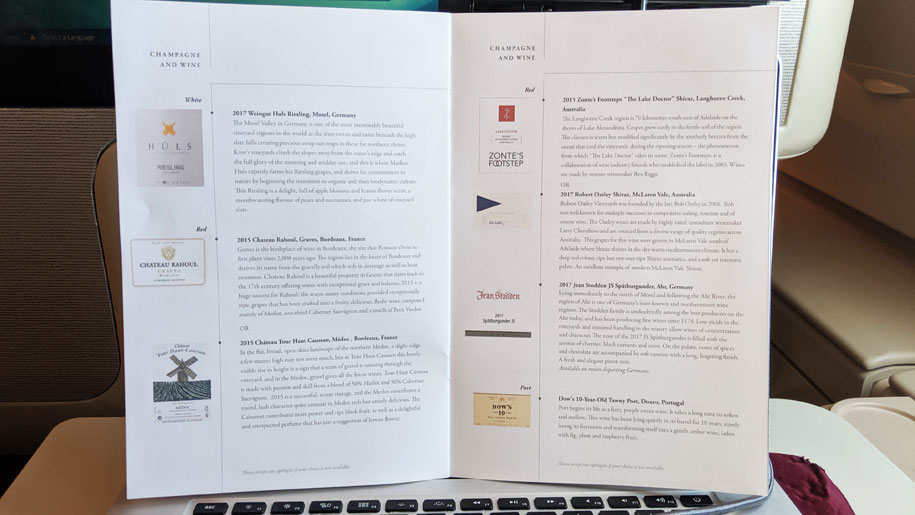 Here’s a picture of the seat when it has been flipped and made into a bed. Sorry it’s a bit messy, but it’s very comfortable as a bed. 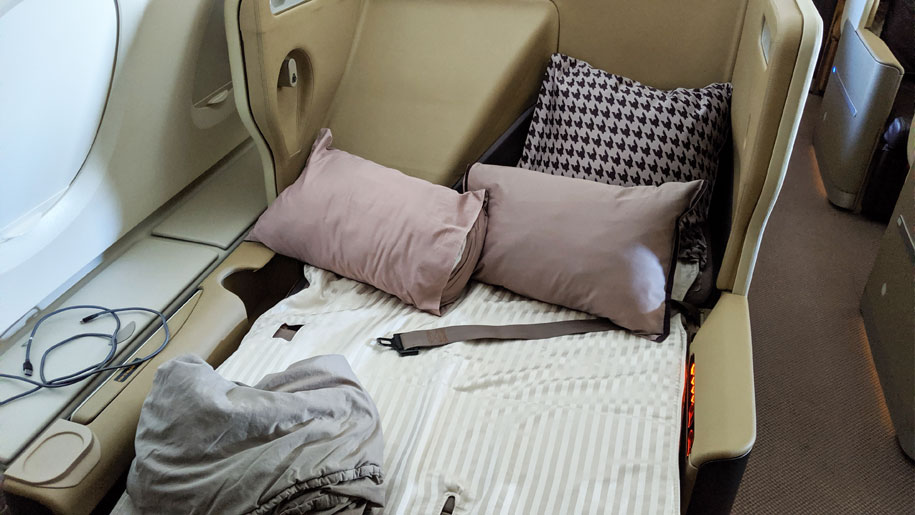 We were on time into New York arrived at 1040 in the morning (with the six hours’ time difference with Frankfurt). Immigration was quick (ten minutes) and bags arrived about five minutes later. I then took the Air Train to Howard Beach and then the A Train to my hotel in Lower Manhattan.

I really like this business class seat and will be worry to see it go.

Having flown the new one, while I still think flipping the seat on these seats is frustrating, there’s no doubt the cushion is more comfortable and you can get a good night’s sleep once it is done. Staff were exceptional, but they always seem to be on Singapore Airlines.