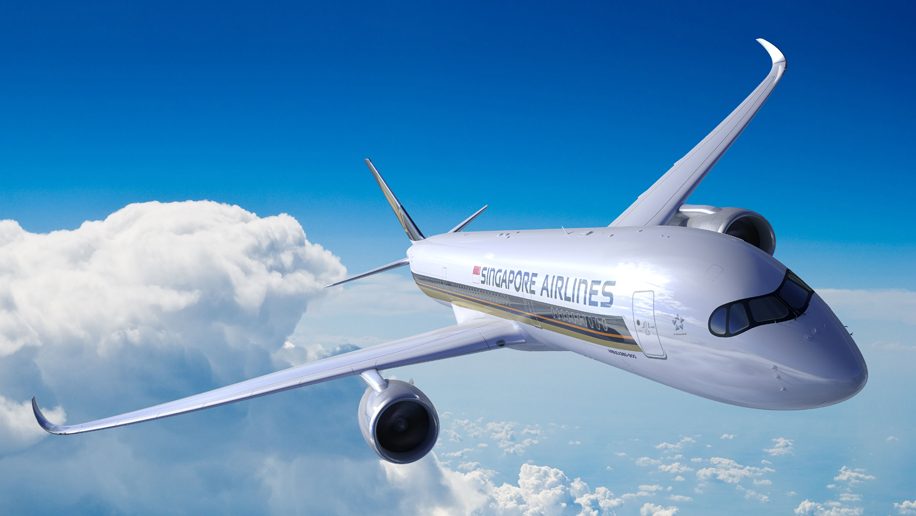 Singapore Airlines (SIA) reclaimed the title of the longest commercial flight in the world with the relaunch of its daily nonstop service between Singapore and New York Newark on October 11 last year.

At 16,700km and between 18 and 19 hours in duration, it is an epic flight. Regular readers will know that the airline used to fly the route with a four-engine A340, but stopped in 2013 in the face of high fuel prices.

The new A350-900ULR (ultra-long range) aircraft is an extended-range variant of Airbus’s existing A350-900, and features the same business class seat.

I have flown the A350 before in its ‘non’ ultra long-haul form on a flight to and from Manchester and Houston (I went business class one way and premium economy the other. You can read those reviews here

As a result, while I talk about the seat, the focus of this review is the experience of flying for 18 hours.

I arrived at Newark Terminal B at 0800 for my 1035 departure on flight SQ21 to Singapore. Check-in was empty, although I was told I’d just missed the crowd. I picked up my boarding pass – in business this gives you access to the fast lane at security, which was just about worth it, but it still took about ten minutes to be processed.

SIA uses the Virgin Clubhouse here, which is next door to the British Airways lounge. It’s a small room with a bar as well as a dining area. The staff were excellent and asked constantly if I would like food from the breakfast menu or drinks. I hadn’t had breakfast, so I ate here and also had a coffee, though strangely, when the passenger next to me asked for a coffee a few minutes later, he was told they had run out.

The flight was called at 0950 and I walked the short distance to the gate. There was a short wait and then we were on board. My jacket was taken, and I was offered a choice of orange juice or a fruit cocktail. A drinks order was taken and I opted for some tea. 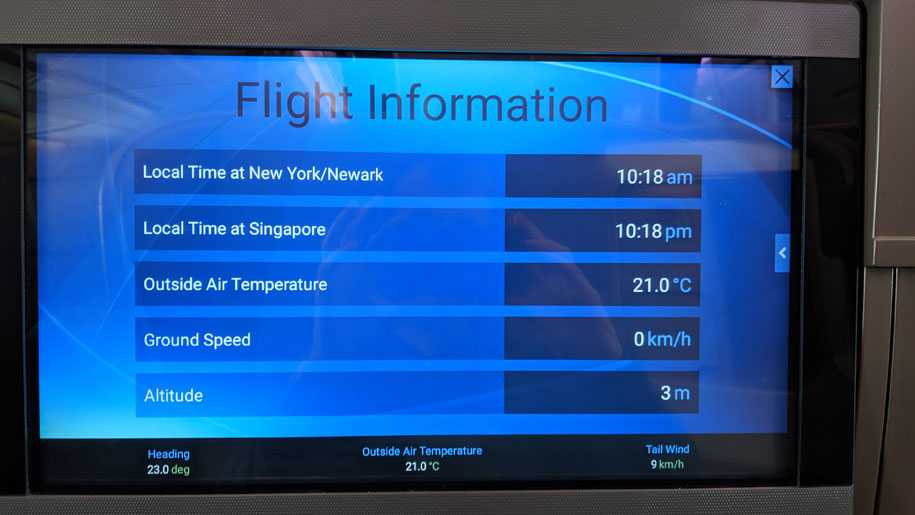 To achieve the ultra long-haul distance, the airline has lowered the number of seats by removing economy class, so there are only 67 business class seats and 94 in premium economy. As I mentioned above, this is the same seat as on the carrier’s standard A350-900. If you would like to watch a video of that, see this review.

The business class cabin in this configuration is different, however.

It is split across two areas.  I was seated in 27D, a centre seat in the middle of the second business class section with direct access to the left aisle, owing to the cabin’s 1-2-1 configuration. The seats are wide (29 inches/ 74 cm) and recline to offer a fully flat seat, although this is done by folding down the back of the seat rather than pushing a recline button, which is a disadvantage, since you can’t just recline and go to sleep but have to get up and ask for help to do this.

The seat has a good amount of room, although not as much as on the A380, and for take-off most of the storage areas are not to be used, so you have to stow many of your belongings in the overhead lockers. These are located only over the window seats.

Beside the IFE screen there is a compartment where you could keep a phone and perhaps a paperback book. After take-off you can store a backpack-sized bag in the large space underneath the footstool, while a side compartment next to your shoulder is good for a magazine or an iPad – I also put my own noise-cancelling headphones in there. By the arm area is a compartment for a bottle of water and the headphones provided by the airline.

The IFE screen is very large (18 inches/ 46cm), and not touchscreen, which is an advantage as it means you don’t have the passenger behind disturbing you by pressing the screen in the back of your seat.

I knew that SIA doesn’t provide pyjamas for this flight

so I brought some of my own, which were, purely by coincidence, the Lalique ones SIA provides in first class, which I had kept from a flight last year on the A380. 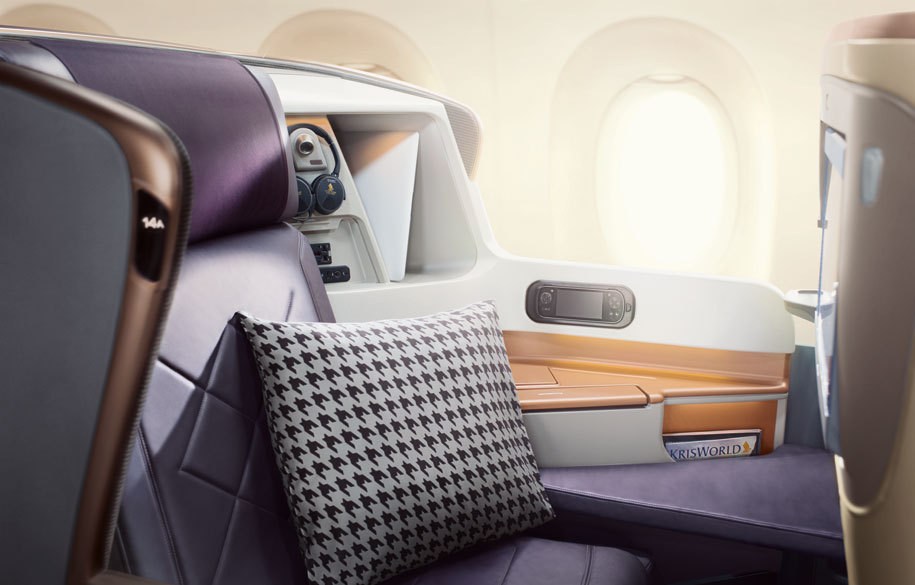 If you really value space, then the bulkhead seats are the ones to go for (rows 11 and 19). These have more foot room, because instead of putting your feet to one side so you are at an angle, you have the whole bench in front of you. That said, I found there is plenty of room in the regular seats, and I don’t like the risk of being disturbed by galley noise so prefer the centre of the cabin. 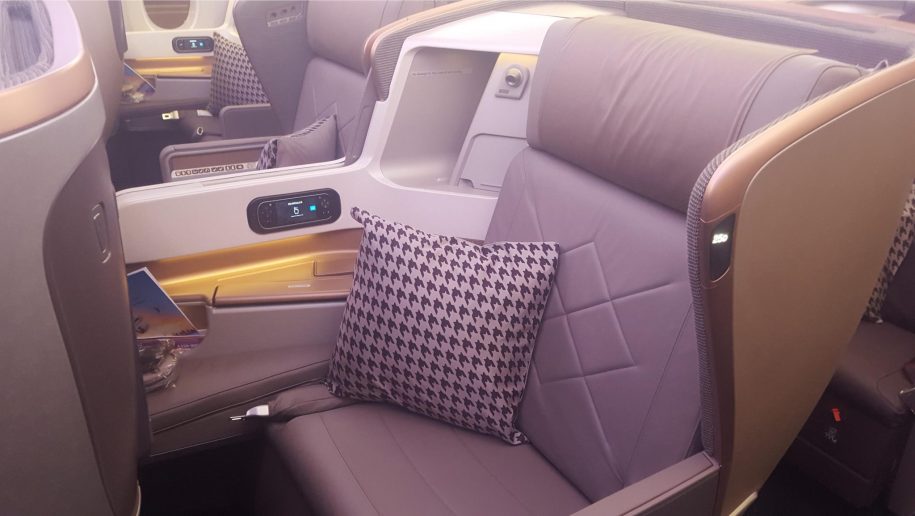 If you like looking out of the window, then obviously that’s the choice for you, or if you are travelling as a couple or with a colleague, then perhaps the middle seats would be best. There is a sliding divider between the seats that doesn’t go right the way across but is still very effective. If I had to choose, I’d go for mid-cabin in the second section, and probably a window seat (the flight was full so all I could get was a middle seat). 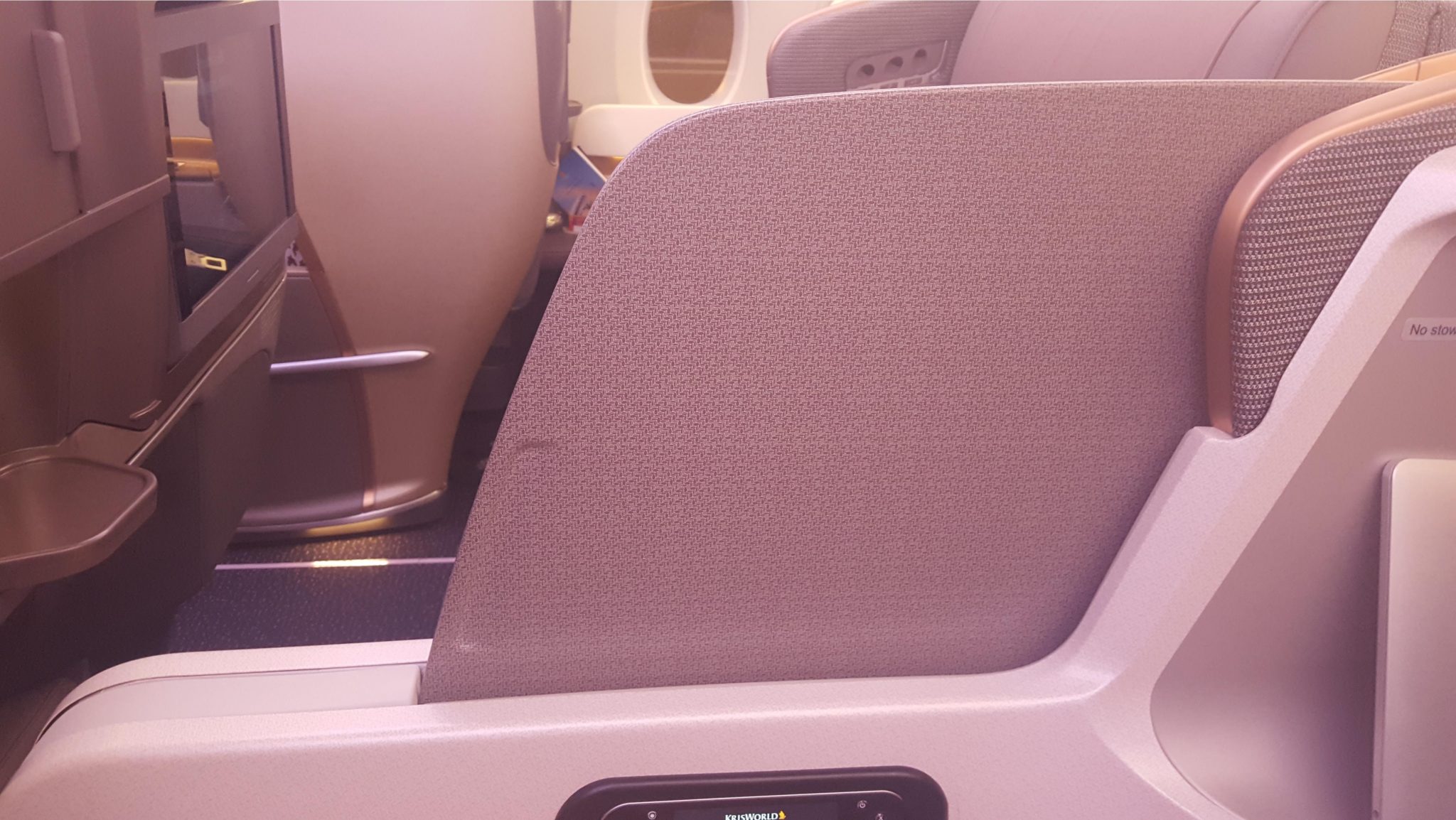 I was very tired when I got on and fell asleep before take-off. Once we were in the air I asked for the seat to be flipped, and then slept again for nearly an hour. I woke when the meal was being served (while I’d been asleep, my tea had been delivered but had gone cold).

From one point of view, falling asleep like this was a mistake, but I’ve found that one of the ways of dealing with jet lag is not worrying about it. Deciding when to sleep on a flight this long isn’t easy, because you set off in the morning, and, because of the near 18-hour flight, and the 12-hour time difference, you arrive late in the evening the following day. So while you could perhaps sleep for several hours, if you do, you’ll lie awake when you arrive in Singapore. Instead, I didn’t try to sleep for long, but took short naps when I felt like it. The problem, of course, is that to sleep properly you need to flip the seat back each time. For this first meal I ended up eating “in bed”, cross-legged, having put down the table and being served that way.

Generally, during the 18 hours, I did lots of work (yes, honestly), read a book, and watched some of the films on the IFE system, which is excellent, if a little tricky to navigate at first using the handheld control. 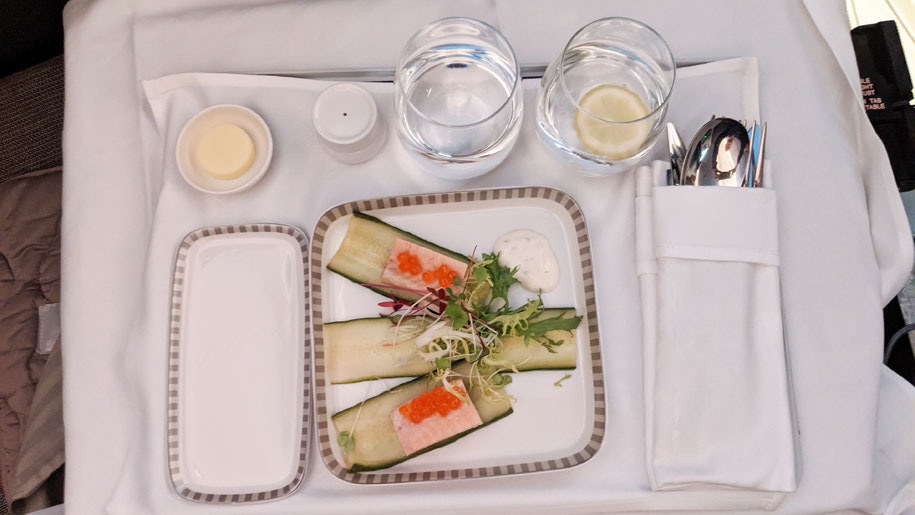 There were two meal services, with an explanation given on how the crew were proposing to serve them. The first meal service would take place shortly after take-off, then from three to 16 hours we could order from a separate menu – snacks, but also more filling food – and then between eight and 16 hours a second service would commence mid-flight onwards and would be available up to two hours before landing. I believe this means you could ask for your food to be delayed (or simply be asleep when it was being served).

There was a choice of five dishes for the main course – I had the Oriental chicken noodle soup, which was garnished with mushrooms and leafy greens. Other choices included western ones (roasted herb-crusted beef) and other Asian dishes (Thai-style prawn with basil and chilli with stir-fried vegetables and potato gratin). Dessert was a choice of Ben and Jerry’s Chunky Monkey ice cream or New York cheesecake. We were then offered a selection of fruits and cheese. 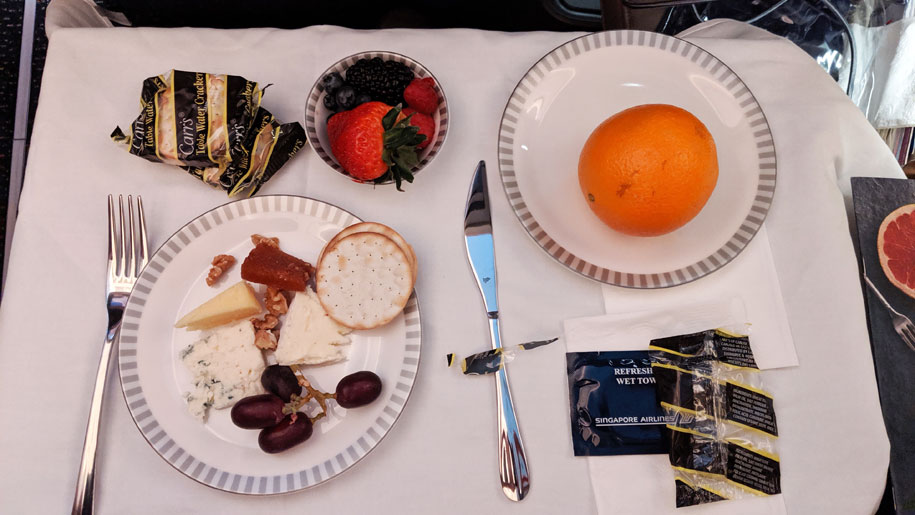 The wine choice was:

The second meal service gave various options including a selection from chef Alfred Portale (New American cuisine), a wide range of courses that the airline would normally serve, and then the Canyon Ranch Selection.

Unlike on other flights, I couldn’t find a Book the Cook option for this one, perhaps because the airline has spent time in devising a new menu.

These Canyon Ranch menus “prioritise nutrition and hydration along with bold flavours and textures, and are offered alongside the usual meal selections”.

On this flight we were offered an appetiser of roasted fennel and peach salad, mascarpone cheese, candied walnuts, endive, watercress and balsamic reduction. The main course was pan-seared halibut with wheat berry salad, grilled asparagus and marinated cherry tomatoes, followed by a vanilla crème brulee. For each of these the number of calories, carbs, protein, fat and sodium were listed.

I went for the normal menu, and so had an appetiser of Alaskan crab salad with Louie dressing. 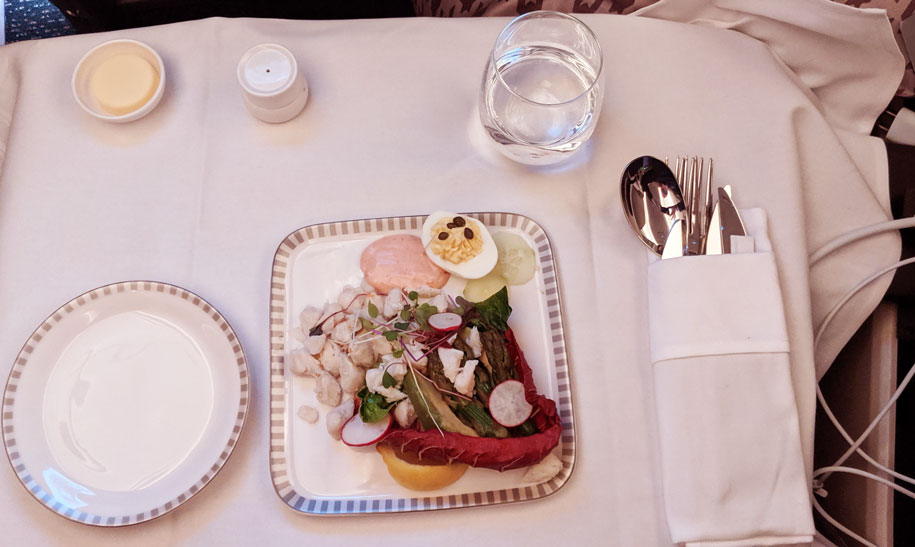 Then stir-fried pork in Yu Xiang sauce with Asian vegetables and steamed rice (and then some petit fours with fruit). 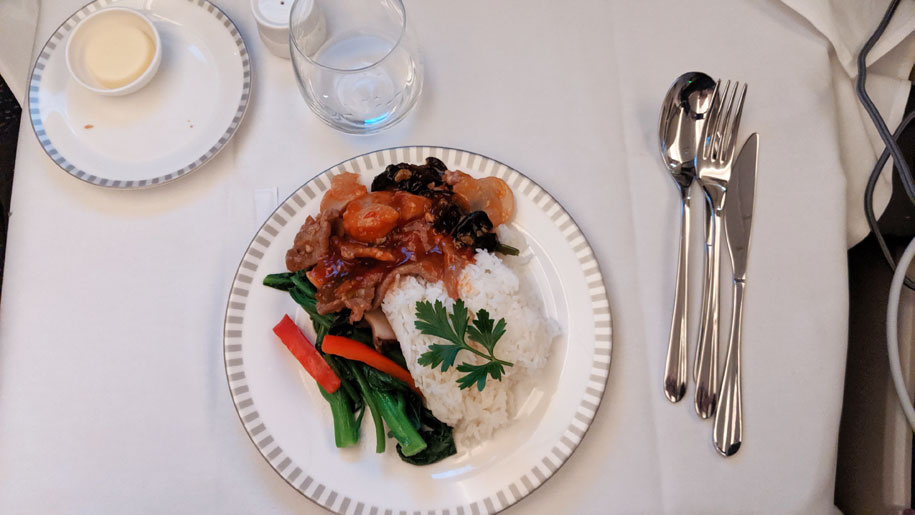 As has been the case on previous flights with Singapore Airlines, the staff worked extremely hard throughout the flight, yet made it look effortless. While I worked I requested a cup of TWG tea (there is a choice of nine of these teas, as well as seven “in-house” teas and then a range of Illy coffees).

Once I had asked for this, whenever my cup had been empty for some time a member of staff would come by and ask if I wanted a refill, which, this being a long flight, I did. It’s a small thing, but not having to press the call button each time meant I could get on with my work and stay refreshed and hydrated (I was drinking the caffeine-free tisanes) throughout the flight.

After all the food we had been offered, an hour before landing the flight attendants came around with a large tray of chocolate Haagen-Dazs ice cream. A lovely end to the flight.

We landed on time at Singapore and were off the aircraft after a short delay. There was no queue at immigration.

This was a very comfortable flight, and the seat, IFE and excellent staff made the 18-hour journey seem more like a regular 12-hour sector. The fact that the flight was full is hopefully evidence that people are prepared to pay more to have a direct service between New York and Singapore. Let’s hope that the new aircraft means this time the route can stay viable.