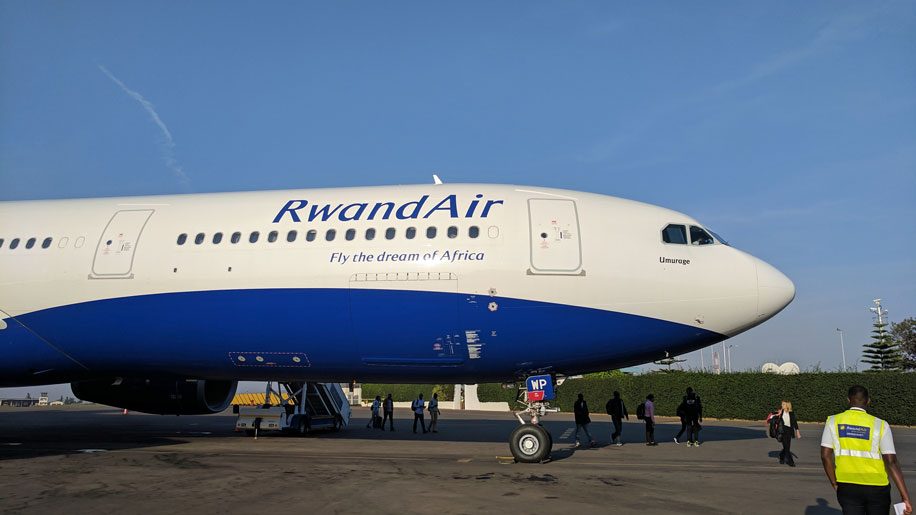 Rwandair has been around since 2002 under the name Rwandair Express, changing its name to Rwandair in 2009. It has a young fleet of three Boeing 737-800NG, two Boeing 737-700NG, two CRJ900NG, two Bombardier Q-400NG aircraft, all in dual class configuration, and two new triple class Airbus A330s. The airline flies to 21 destinations in Western, Central, Eastern and Southern Africa, the Middle East and Asia.

It launched these new three-times weekly flights direct from London Gatwick to Kigali, the capital of Rwanda in May 2017. To read more, see Rwandair to launch Kigali-Gatwick flights. 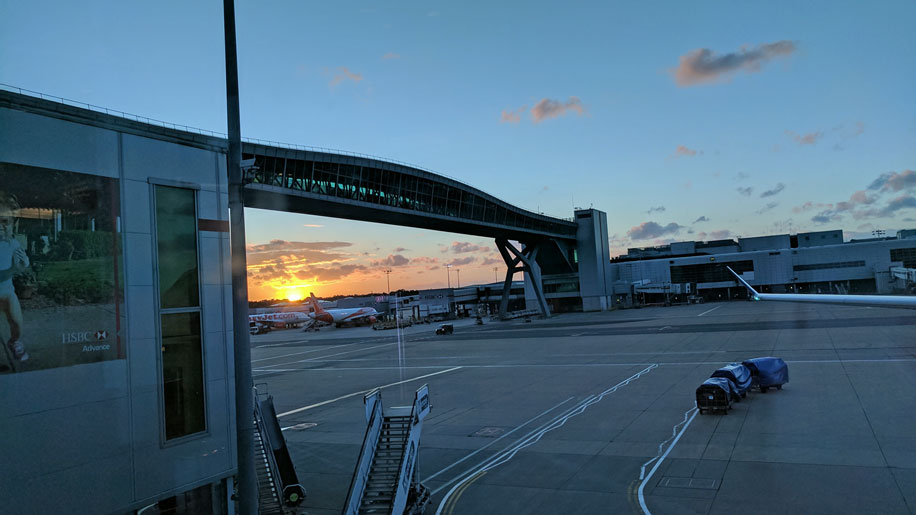 I arrived at London Gatwick by train on a delayed Thameslink service for my 2150 departure. All the trains were delayed because of high winds. When I arrived I took the escalators up to the concourse level and then walked around the corner to take the short shuttle train across to the North Terminal which is where Rwandair flies from.

By then it was around 1950. There is very little signage at Gatwick for Rwandair and no screens showing the flights and which zones to go to so I asked at an information desk and was directed to Zone C.

When I got there, I could see that there were about 20 people checking in a variety of giant boxes and some huge bags, so heavy, that they took two people to lift them. I waited for about ten minutes here. There was a business queue and a first queue, but since the boxes were blocking all three aisles (including economy) it took a while to be seen. Once I’d dropped my bag, I used the fast track security and was quickly airside. 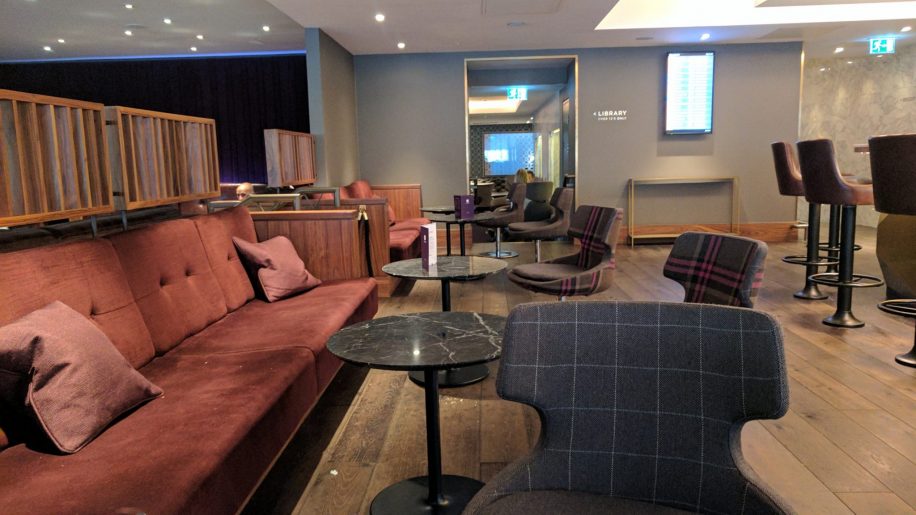 Rwandair uses the No 1 Lounge Gatwick North. I have a separate review of that and will post the link asap.

In the meantime, here is a review of the No 1 Lounge Gatwick South here for comparison. 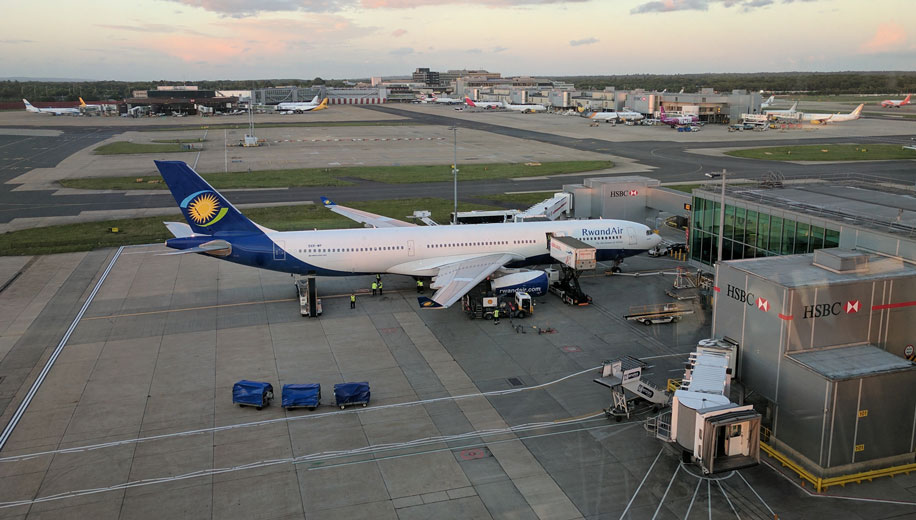 At around 2100 the flight was shown as boarding and so I left the lounge and then gave myself a scare since I realised that Gate 102 was one of the distant gates accessed over the bridge.

I needn’t have worried since by the time I got to the gate there was still a five-minute wait before boarding, with children and those needing assistant (only two people) first, and then business class. 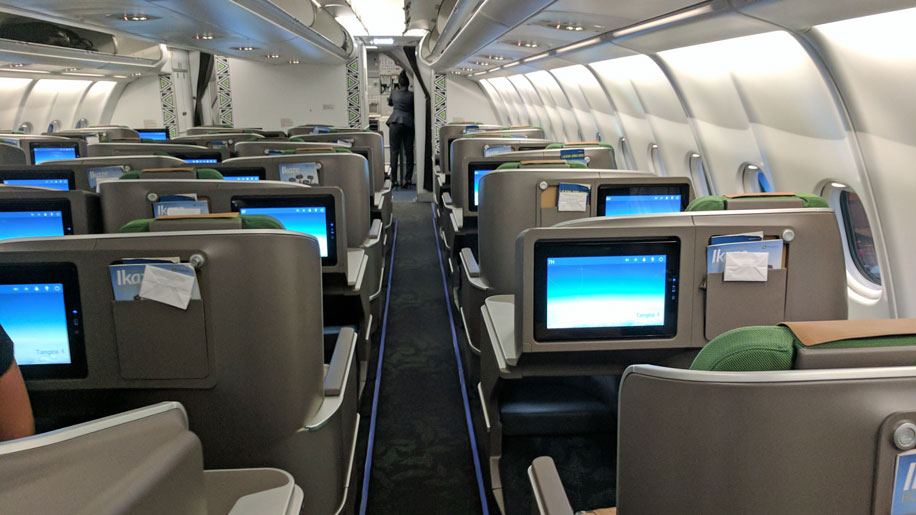 Rwandair uses two aircraft on the route, an A330-200 and an A330-300, the latter being longer and having more seats in both economy and business. This flight was operated by the larger aircraft, while the return flight was on the slightly smaller A330-200.

The seating in business class is 1-2-1 with the seats staggered slightly so that the centre pair are closer together in one aisle and then further away in the next, while the window seats are either next to the window and protected from the aisle, or on the aisle. I was lucky in seat 4H since I was next to the window. This is the Thompson Vantage XL seating and you can read more about it here. 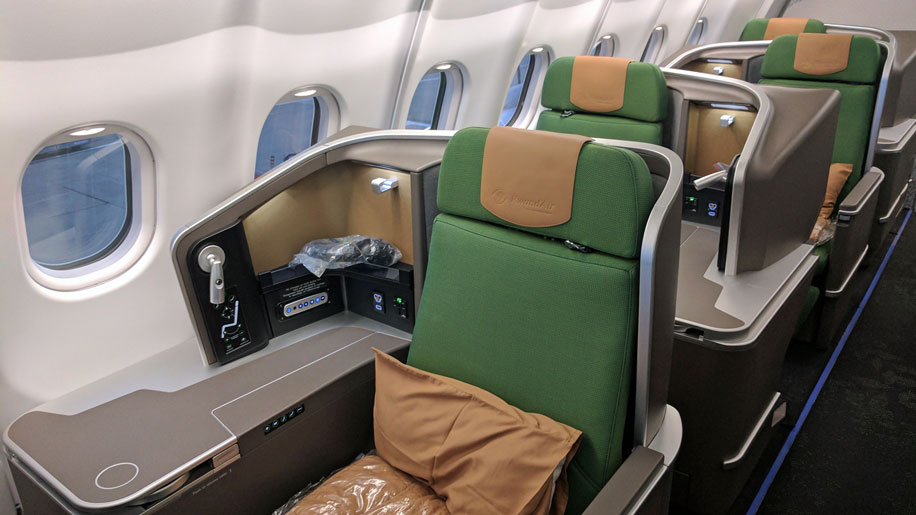 As you’d expect with such a spacious arrangement, there’s plenty of room to work, relax and sleep, The seat has several pre-set positions or you can alter it minutely by pressing various buttons. There’s a massage function and on the same panel options for mood lighting and a reading light as well. On another panels there are further controls for various lights. 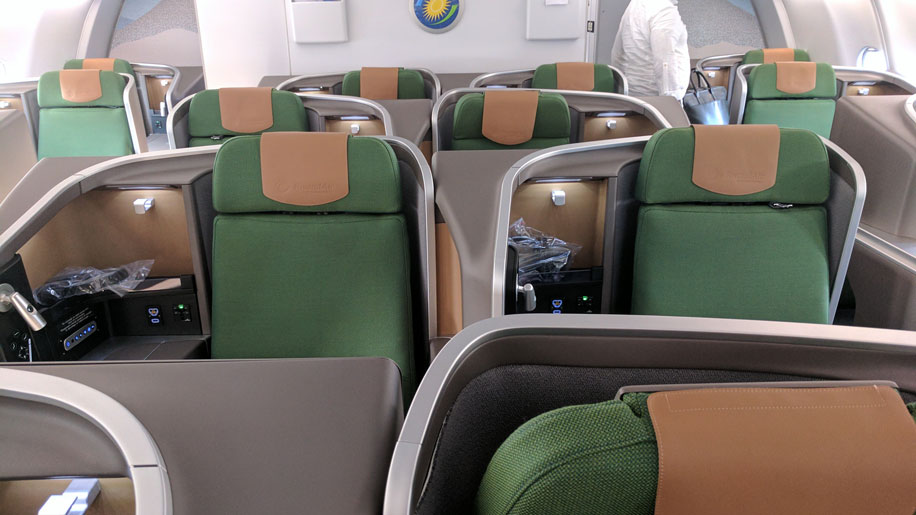 I’d avoid the front row because of galley noise and also the back row where there are only two window seats, since these are exposed to the rear galley. I would prefer a window seat with the side table giving you shelter from the aisle, so that would be seats such as 2H and 4H.

While we waited there was lots of cheerful music, mostly in English – cover versions of songs, though there were some African songs as well.

Hot towels were offered but drinks were slow to come before take off and were only water and orange juice. I bundled up my jacket on the arm but it was ignored so I stowed it myself in the overhead locker.

The pilot came on and told us it would be a flight time of seven hours and 55 minutes and that because of the strong winds in Europe they might have to fly slightly lower to make the flight as smooth as possible. 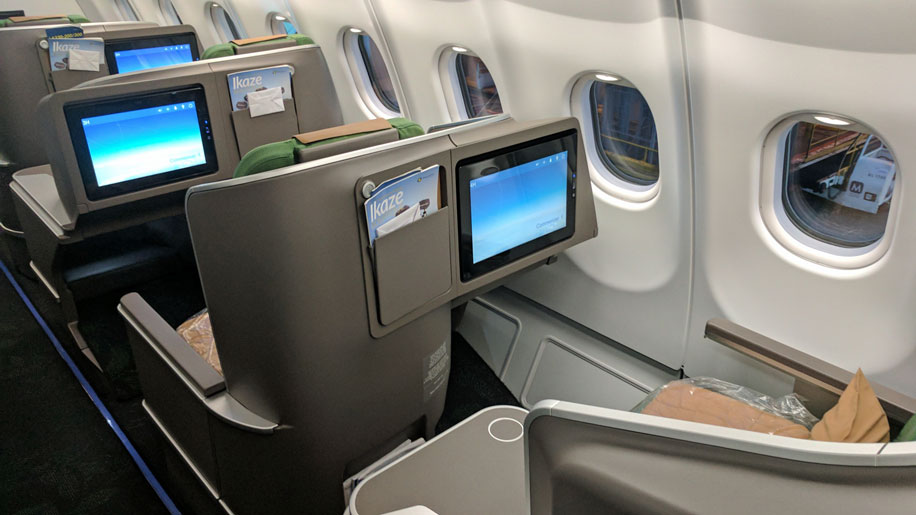 Inflight entertainment was extremely limited, with only 12 films in total and seven television programmes (more will be added, and on the A330-200 there was a wider choice). There is good wifi and lots of charging – not only a universal plug for UK, US and EU plugs, but also a USB socket by the side of the IFE screen and another by the power point along with the three-pronged socket for the noise cancelling headphones. 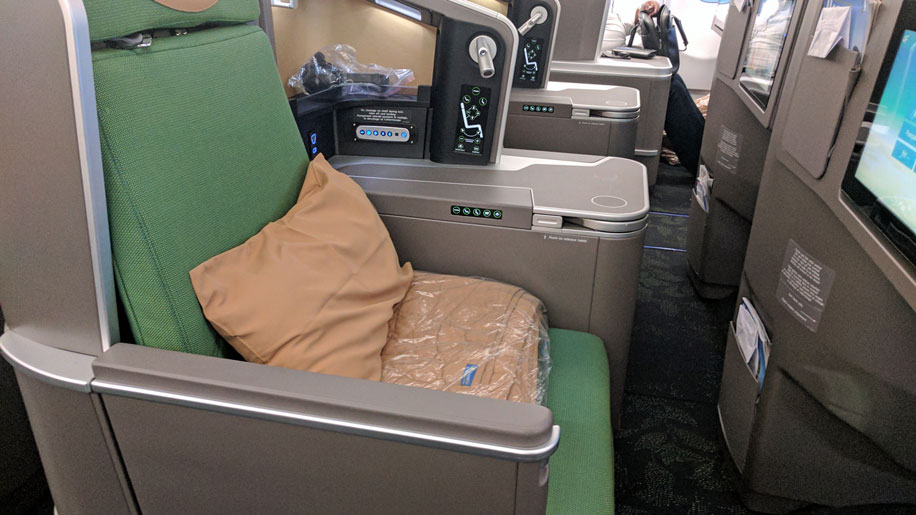 When drinks came round, I asked for the Champagne – this was Moet Chandon served from half bottles – probably wise given the numbers on board. The other wines were all open with corks in the top – they were mostly South African wines, though there was also a Louis Jadot. The drinks came with snacks – again, all branded – biscuits and macadamia nuts. Refills of drinks then came round reasonably swiftly and the food was prepared in the front galley.

To be fair to the crew I suppose they were still getting used to the whole flight from London. Service was discreet for the first hour of the flight apart from the offer of a hot towel. There’s no bottle of water by the seat (I think they should consider that), so it was a long wait for a first drink after take-off – around 2240, but at least there were only five of us in business class, and one of those was an unaccompanied minor who just went to sleep.

Unfortunately, because the flight is a relatively new one, there were a number of problems with the service. There were no menus on board, and the menu on the IFE system was not the one we were served. In addition, the flight attendants had not been told what the food was, and could not identify it when serving it (this was not the case on the return journey). I was asked if I was allergic to anything, at least.

The wine on board was poor. All wines had been opened, and when I asked why, I was told they had been loaded that way. The first attempt at pulling out the cork saw it snap off. Also, the wines were not good – charitably they were past their best. Also on the trolley was a Louis Jadot Marsannay (a white wine). The bottle (judging from the label) looked as though it had been around the world many times. I asked for a taste. It wasn’t a Louis Jadot Marsannay. Yet the bottle was full.

For the main course, a different attendant brought round the choices on a trolley. I asked what they were and she said Chicken, beef or vegetarian. I went for the vegetarian. It was prawns, though there was also some tofu in there.

By then it was around midnight so I went to sleep. The cabin was nice and quiet, and I had no trouble sleeping. The seat, which reclines fully flat, gives you plenty of room. I woke when I heard breakfast being prepared. Again, there was no menu. 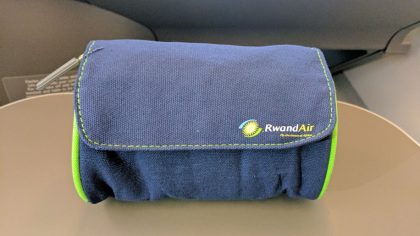 Amenity bags were given out. These were an attractive blue with the Rwandair logo on, and contained all the usual items and a razor and shaving gel as well. The female ones are in white but contain the same items without the razor.

We arrived slightly early at 0700 and to disembark simply walked down the stairs and into the building. 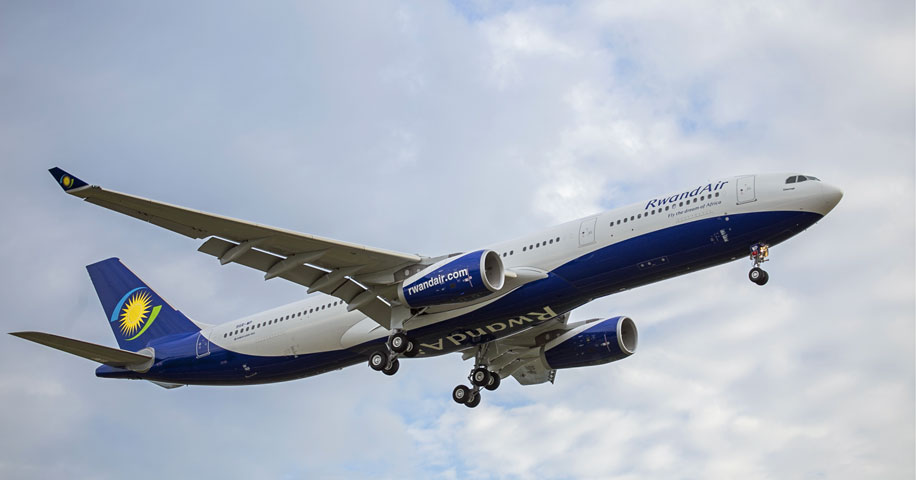 Apart from the problems with the food and drink, this is a great service on a good aircraft with a fully-flat seat in business class. The service will improve, I am sure, as will the food and drink, and indeed on the return flight, a day flight on the A330-200, it was much improved. 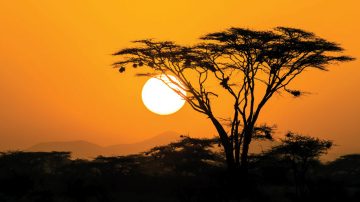 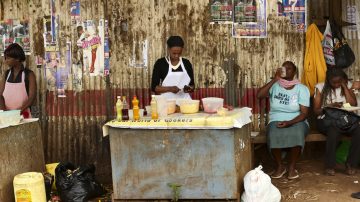 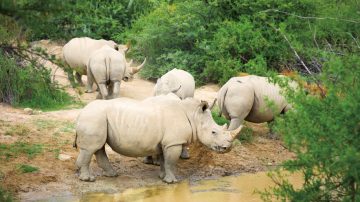 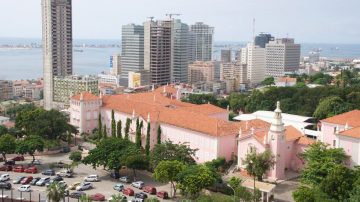