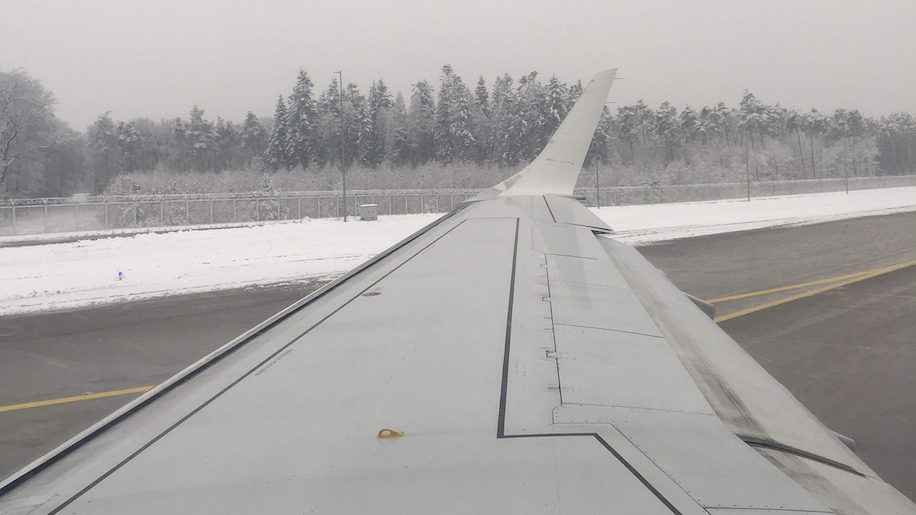 I was only travelling to Frankfurt for the day, so I checked in online the night before, accepted my seat assignments (14F and 20F) and had my boarding passes sent to my phone. I then saved them in my Apple Wallet app. I was returning from London Heathrow at 2000. As I live in East London, it is easy for me to get to London City – with an Uber at 0630, I was at the airport in 20 minutes.

I took the escalators up to security, passing through the electronic gates by scanning the QR code on my mobile boarding pass. I didn’t have any luggage and security was pretty quick. I did have a laptop, though, which had to come out of its case. Music was playing overhead, presumably to calm passengers. Body scanners are in operation but I wasn’t asked to use one. The process was well staffed and well organised. I was airside just after 0700. I had breakfast at the Pret near Gate 3.

At 0740 I received a text alert from Lufthansa saying my flight was delayed until 0845, and then a second with my gate number (7). I walked to the gate at 0820 – there was a lot of construction work going on so we had to hang around in the corridor before being allowed downstairs to the indoor waiting area by the tarmac. Boarding passes and passports were checked at 0835, and I managed to get a seat, but not everyone did.

At 0855 it was announced that because of snow in Frankfurt delaying the outbound flight, there would be a further delay until a new London City departure slot became available, and we wouldn’t expect to be leaving until 0950, at the earliest. Boarding started at 0910.

I was sitting in economy class window seat 14F, directly over the wing. There were six rows of business class on this Embraer 190, separated from economy by a curtain. Seats are configured 2-2 (A-C, D-F) across 29 rows throughout but only single seats are sold in the business cabin so premium travellers have more space. 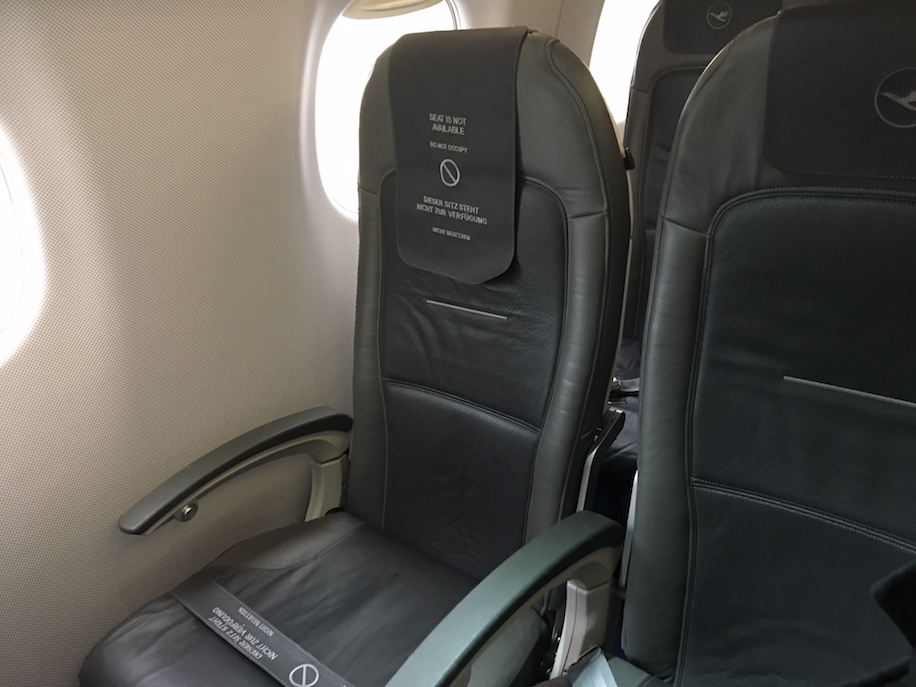 The plane was clean and seats were slim-line, upholstered in grey leather, with small coat hooks on the right and fold-out tray tables. Once everyone was on board, the man next to me moved to another seat so I had extra space to place my belongings, which was a bonus.

There are no middle seats so it’s just a case of opting for your preference of window or aisle. There is extra legroom in exit row 12. Sitting nearer the front means the boarding and disembarkation process is quicker.

Glasses of water were passed around at 0935. The fuelling process began at 0950 and crew walked down the cabin instructing people to undo their seat belts. A little while after there was a safety demonstration. At 1010 it was announced there would be a further delay, meaning an arrival of 1300 local time. My day trip was beginning to look like a waste of time.

The plane pushed back at 1030, taking off at 1040. Once airborne and the seat-belt signs went off, a trolley came around with free ham sandwiches and cakes (passengers could choose one or the other but I declined as wasn’t hungry). A trolley of soft drinks, tea and coffee came around at 1100.

We landed in snowy Frankfurt at 1300 local time (1200 UK time) and then had very long taxi to a gate. At 1325 we disembarked via steps to the front of the plane and boarded a bus in the slush and snow. By the time I had passed through immigration and got airside it was 1350.

It was bad luck that the weather delayed this flight for so long but crew made efforts to keep us informed and updated.

PRICE Internet rates for an economy class midweek flight in February started from £274.