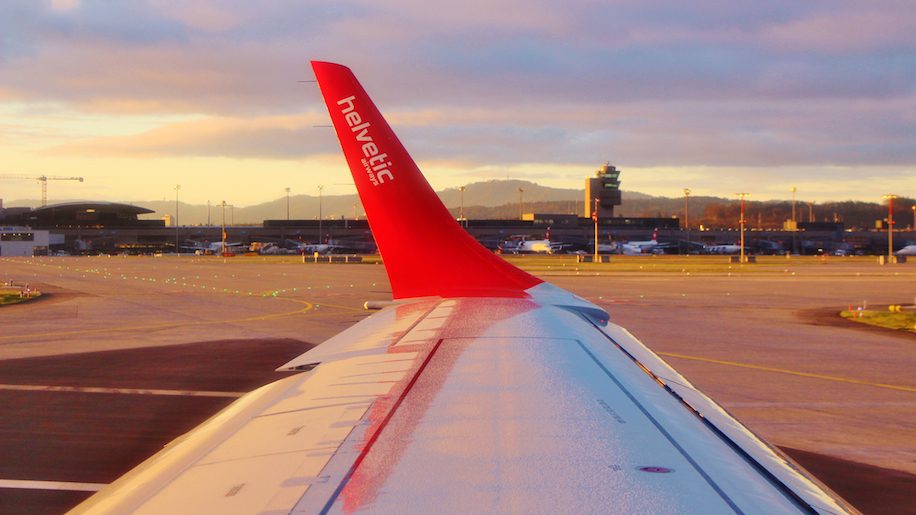 Helvetic Airways is a Swiss airline founded in 2003. It has 13 aircraft (Embraer 190s, Fokker 100s and an A319) and flies to just over 30 destinations in Europe and North Africa. Four Fokker 100 and four Embraer 190s have been leased on a long-term basis to Swiss International Air Lines and Lufthansa within the scope of an ACMI (aircraft, crew, maintenance and insurance) partnership.

I booked my ticket on swiss.com and selected my seat 14D (free when you book a Classic as opposed to a Light ticket). The most expensive Flex economy tickets allow you to also choose your preferred seating zone and free booking changes. I checked in online the day before my departure, and sent my boarding pass to my iPhone, which I saved in the Passbook mobile wallet.

I arrived at London City airport via DLR train at 1650, 90 minutes before the departure of my flight (LX467) at 1820. There are check-in desks and kiosks on the ground-floor departure area but as I was travelling with hand-baggage only (the limit is 8kg cases measuring 55cm x 40cm x 23cm) I went up the escalators to security.

There was a member of staff handing out plastic bags for liquids and stations at which to sort your belongings. It wasn’t busy the Wednesday evening I was travelling so there weren’t many other people to contend with at screening. Laptops had to come out of their cases, and coats and jackets off. I was airside by 1700. It was a stress-free experience, which is always a bonus.

I had a bite to eat at the Pret outlet near Gate 3, and waited for my gate to be announced 30 minutes before boarding. By chance, it was Gate 3, which was handy. The flight was delayed until 1835 so boarding was held up by about ten minutes, but it didn’t take long once it did.

Passengers had passports and boarding passes checked, and then headed downstairs to cross the tarmac. Those sitting in rows one to 14 were instructed to board from steps at the front of the plane, while 15 to 28 were to enter from the back. It was not a busy flight so it didn’t take for everyone to find their seats. There was a safety demonstration at 1843.

The seats are configured 2-2 (A-C, D-F) throughout, with the front few rows dedicated to business class. There isn’t much between them though, especially on this short flight. The Embraer 190 is not a big plane but the seats were comfortable enough with a satisfactory amount of legroom. They were upholstered in neutral beige leather with good-size fold-out tray tables. Everything was very clean and there were reading lights above. 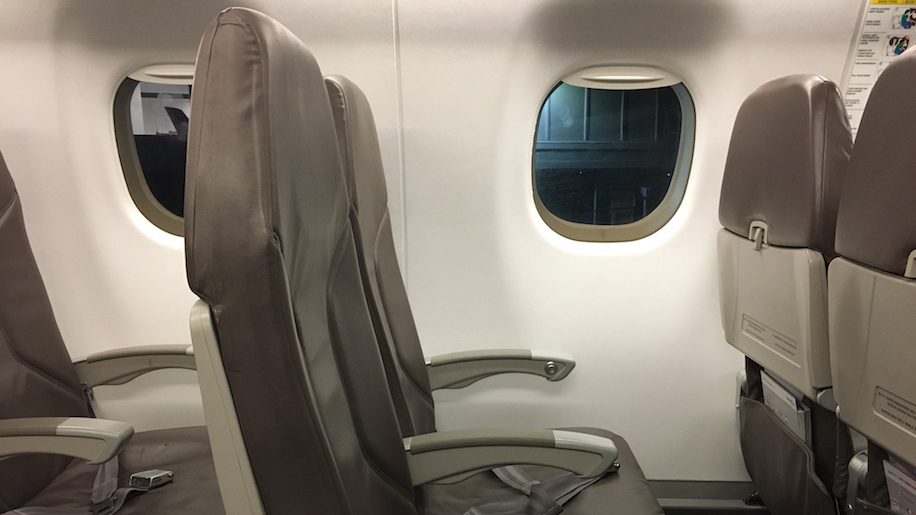 Sitting nearer the front is probably best as you will be able to disembark quicker. There are no middle seats to worry about on this flight so it’s simply down to whether you prefer a window or aisle. Row 13 by the emergency exit offers the most legroom.

Take-off is always a little dramatic at London City because of the short runway. After a brief taxi at 1846, the plane’s engine’s roared and we raced forwards for take-off, powering off the ground after just a few seconds, and making a steep ascent above the Docklands, followed by a sharp turn over the city before reaching a comfortable cruising height.

The cabin lights were dimmed for this, but by 1900 they had come back on. At 1915 chilled cheese and mustard mayo sandwiches were handed around (really tasty) and mini bottles of wine, as well as soft drinks. No spirits were available. Another member of crew passed out a basket of Swiss chocolate at 1940. (All catering was Swiss International Air Lines branded.) It was all very civilised and peaceful. 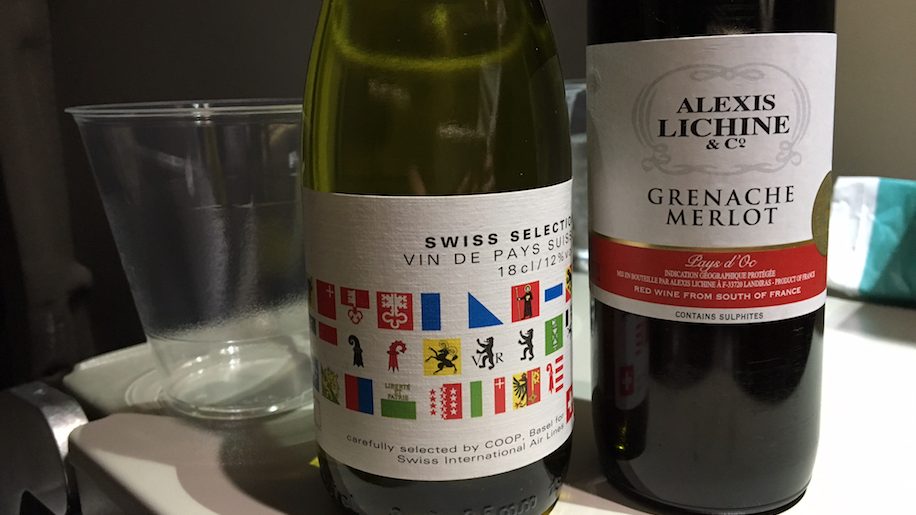 We started making our descent at 1950 when a member of crew came around rapidly clearing away rubbish. It was a bit turbulent. Despite a short delay to take-off, landing was on time at 2000 (2100 local time). Disembarkation was via steps at the front of the plane to an awaiting bus – it was cold and there was a bit of sleet. It didn’t take long to go through passport control and into arrivals as I had no luggage to collect from reclaim.

I always like flying out of London City and found this Helvetic Airways/Swiss flight to be very good. The crew whizzed around distributing refreshments with ease; the overall journey was seamless.

PRICE Internet rates for a return economy class Swiss/Helvetic Airways flight from London City to Zurich started from £104 in February.