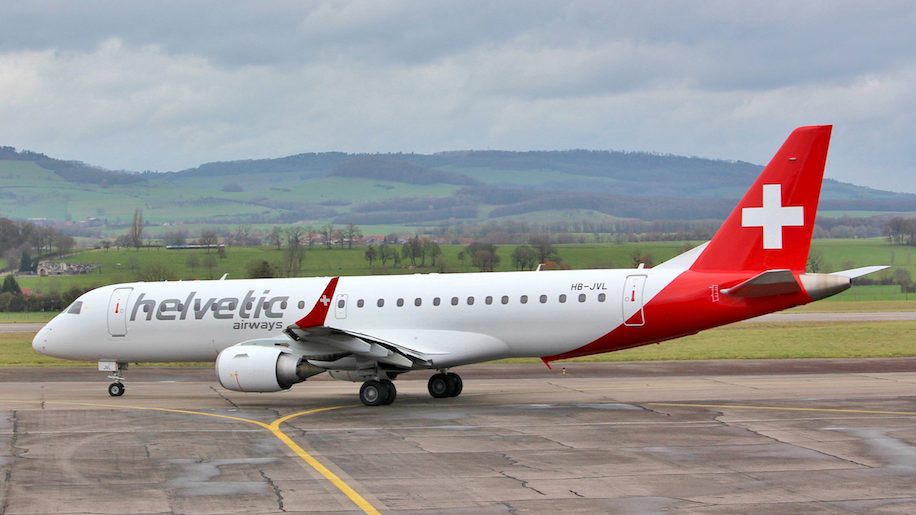 Helvetic Airways is a Swiss airline founded in 2003. It has 13 aircraft (Embraer 190s, Fokker 100s and an A319) and flies to just over 30 destinations in Europe and North Africa. Four Fokker 100 and four Embraer 190s have been leased on a long-term basis to Swiss International Air Lines and Lufthansa within the scope of an ACMI (aircraft, crew, maintenance and insurance) partnership.

I booked my ticket on swiss.com and selected my seat (free when you book a Classic as opposed to a Light ticket). The most expensive Flex economy tickets allow you to also choose your preferred seating zone and free booking changes. I checked in online the morning of my departure, and sent my boarding pass to my iPhone, which I saved in the Passbook mobile wallet.

Economy passengers are allowed one piece of hand-luggage (the limit is 8kg cases measuring 55cm x 40cm x 23cm), as well as a laptop bag or handbag. My flight to London City (LX466) was scheduled to depart at 1720.

I had a car transfer to the airport from Zurich old town – the journey only took 15 minutes and the driver dropped me right outside the Swiss check-in zone (1) at 1645. As I was travelling with hand-baggage only, I walked past the bank of check-in desks to my right, and straight ahead to customs.

First there was an automatic gate to pass through by scanning your boarding pass, and then security, which wasn’t too busy (pop music played overhead). I had to take out my laptop and liquids but my Apple Watch wasn’t a problem. I was airside by 1655, taking a set of escalators up to the departure level.

As I am a member of the Priority Pass scheme, I decided to use the Aspire lounge for a snack and a bite to eat. This is about five minutes’ walk away, up another level via a lift but well sign-posted. A member of staff checked my boarding pass and membership card before letting me in. You have to ask for the wifi login before entering.

Inside there were windows looking down on the departure hall, and various seating areas in beige and brown. A refreshment station had a buffet of hot soup, pretzels, filled rolls, tomato and cheese focaccia, peanuts, gummy bears, yoghurt, fruit and cake. There was also self-service wine, soft drinks, beers, sprits, tea and coffee.

I chose a table near the window with a plug socket to charge my laptop. There are no announcements so you have to keep an eye on the departure boards, which can easily be seen from the window in the departures hall.

The Gate (D51) opened at 1630, with boarding starting at 1645. I left the lounge at 1640 but found I probably should have left a little earlier as there was a long queue at passport control (I had to ask people if it was okay to skip to the front). When I got to the gate a few minutes after, one bus load of people had already bee taken to the plane but it wasn’t yet on it’s final call.

A member of staff told me to scan my boarding pass to open the gate but I didn’t need to show my passport again. There was a ten-minute wait for the remaining passengers to arrive (approximately another 40) and, at 1700, a shuttle bus pulled up and everyone boarded. We got to the aircraft by 1703 and boarding was via steps at the front. There was a bit of a faff trying to find an empty locker for my case but I found one towards the front above row 11 (better than behind the row I was in, which was 16, as it’s harder to retrieve on landing).

I took my seat at 1710. The seats are configured 2-2 (A-C, D-F) throughout, with the front four rows dedicated to business class. There isn’t much between them though, especially on this short flight. The Embraer 190 is not a big plane but the seats were comfortable enough with a satisfactory amount of legroom. They were upholstered in neutral beige leather with good-size fold-out tray tables. Everything was very clean and there were reading lights above.

Sitting nearer the front is probably best as you will be able to disembark quicker. There are no middle seats to worry about on this flight so it’s simply down to whether you prefer a window or aisle. Row 13 by the emergency exit offers the most legroom.

Once everyone was settled, there was a safety demonstration at 1725. The captain then came on to say there would be another ten to 15-minute delay due to heavy traffic, but we were airborne by 1745, and the cabin lights came back on just before 1800. Flight time was anticipated to be one hour 25 minutes.

Crew swiftly came around with a trolley service of drinks (wine, beer and soft drinks), as well as mini cheese baguettes (not bad, but not as tasty at the cheese and mustard mayo ones on the outbound flight). It was a welcome touch though, especially in an era when most airlines (including BA) are ditching free catering on short-haul services. 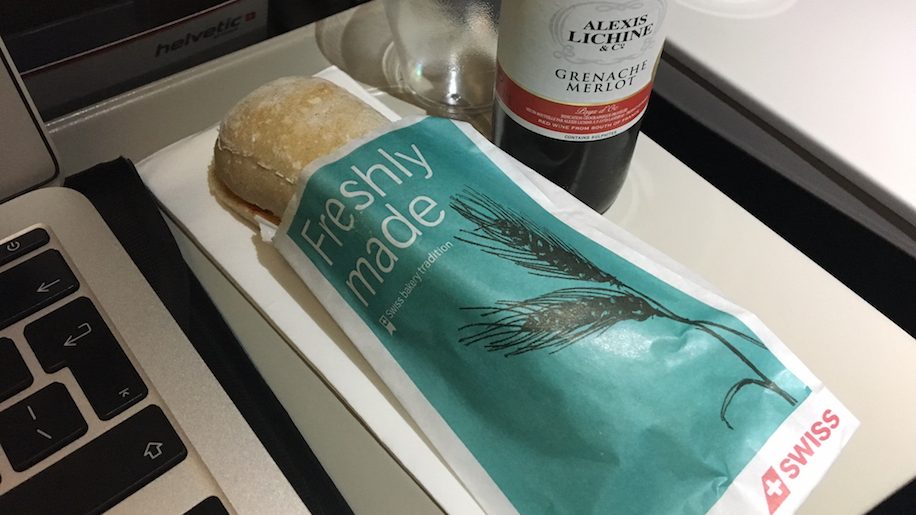 There was a stunning sunset to look at en route. The captain came back on at 1810 to give an update on the flight route, weather and landing time, which would be at 1900 (1800 local time) in London, ten minutes behind schedule.

We landed as anticipated and were swiftly deplaned via steps to the tarmac and a short walk to the terminal. There was only a short queue for the electronic e-gates, before walking through the small baggage reclaim area and into the arrival/departure hall. Taxi pick-ups are to the left-hand side when exiting.

Apart from my outbound flight, I have never flown Helvetic Airways, but with Swiss booking and catering (but Helvetic crew) it worked out to be a very good experience, despite a short delay to departure. Arriving at London City, which is only a small airport and well-located for people living in East London, was great.

PRICE Internet rates for a return economy class Swiss/Helvetic Airways flight from London City to Zurich started from £104 in February.