Garuda Indonesia (named after holy Hindu bird the “garuda”) is Indonesia’s national airline. It was founded in 1949. Today, it serves more than 40 domestic destinations and 36 internationally, carries 25 million passengers and is a member of Skyteam.

Garuda previously flew from London to Jakarta via Amsterdam until March 29, 2016, but cut out the Amsterdam touch-down to appeal to business travellers and leisure travellers on their way to Bali. All return flights to London from Jakarta stop off at Singapore. This is a review of the Jakarta-Bali service.

I was due to take a Garuda Indonesia flight from Jakarta to Bali Denpasar at 1630 and had checked in online in advance, accepting my assigned seat. I had my boarding pass emailed to me. At the moment all domestic flights depart from the new Terminal 3, which is an impressive, light-filled building that will later be used for long-haul international flights.

It took 45 minutes in a taxi from Jakarta’s SCBD, departing at at 1400 – it was raining so the traffic was bad. Rush hour is approximately 7am to 9am, 4pm to 9pm during the week so plan ahead and allow lots of time to get to the airport just in case.

I arrived at Terminal 3 at 1445, and found the two Garuda Indonesia business class/Sky Priority desks in Zone F where I could drop my suitcase. There was no queue and I was issued a boarding pass and my luggage priority tagged. Fast-track security, a short walk away, was also very quick (they had a red carpet laid out so it was easy to spot). There was a request for liquids or laptops to be removed.

I was airside before 1500, making my way down one level to the Garuda Indonesia business class lounge. It was busy but there was a good amount of seating (it would have been helpful to have a couple more departure screens though). The lounge is on a mezzanine level looking down on the boarding gates and shops below.

There was free wifi (with a password) that was fast enough to download a movie, free soft drinks (no alcohol) and a decent selection of Indonesian food including hot noodles, salads, crackers and fried snacks. There was a cinema room, VIP suite, washrooms and a children’s play area. Staff were helpful and spoke some English. 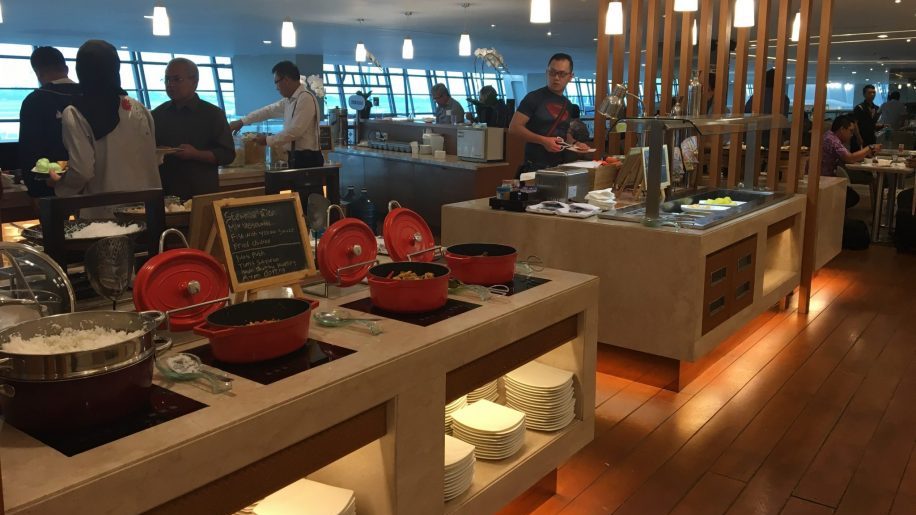 My boarding pass showed that boarding would begin at 1610 from Gate 16 so I left ten minutes before to head down there. It was a ten-minute walk. When I got there, another earlier flight was still boarding so I took a seat and waited for mine to begin at 1620. Priority was given to business class passengers – I was one of the first to be processed and directed downstairs to the tarmac to get on a dedicated business class minibus, which was a nice touch. I found my seat (6K) at the very front of the B737 at 1630 and was offered a choice of apple or orange juice, The Wall Street Journal and Time magazine. By the time all the economy class passengers were on board it was 1700.

There were three rows of business class on this plane, configured 2-2, while economy was a different product altogether, in a 3-3 layout. While the business class seat was wide and comfortable, the upholstery was old and the red pillows looked a bit grubby. There were remotes in the arm for an IFE system. Tray tables came out of the side armrests and there were UK plug sockets. There were four pre-set positions for recline and lumbar support. Reading lights were in the side. 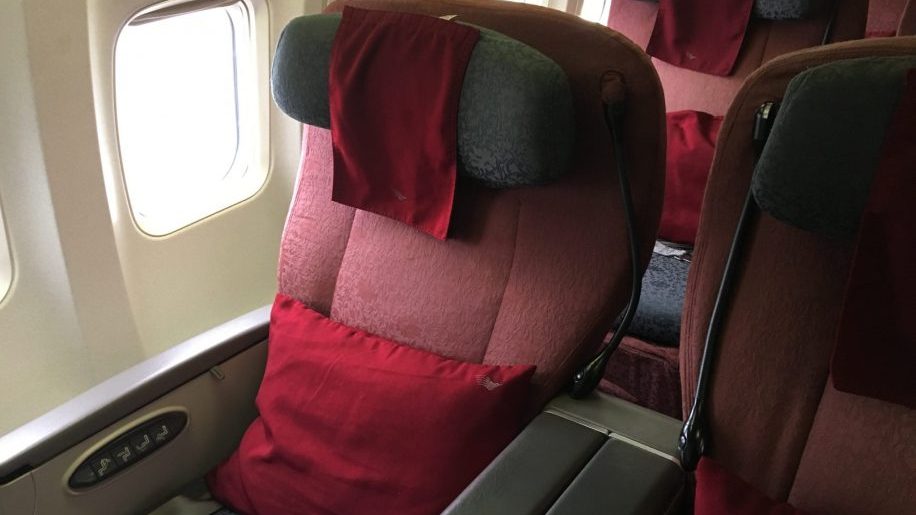 You can’t really go wrong with any of the seats in this small cabin but being in the front row means you get served first and can disembark quicker than everyone else.

The flight time is one hour and 30 minutes (Bali is one hour ahead). Heavy rain started coming down again just before take-off and then eased off. By the time we were in the air it was 1730, an hour behind schedule because of the late arrival of the aircraft in Jakarta.

At 1750, meals were delivered, with white cloths placed on fold-out tables. I had pre-ordered a vegetarian meal, which was pasta with gooey peppers and gelatinous melted cheese. There was bread roll with margarine and some fruit salad and a green jelly for dessert.

Water was served with the meal and no alcohol was available, which was unfortunate as there was some turbulence during the journey and I could have done with a glass of wine. Overall, the culinary offering was poor (the London segment was much better.)

We landed at about 2000 in pouring rain. It didn’t take too long to get off the plane and, once at baggage reclaim, at 2010, a member of staff from the Garuda Indonesia Arrivals lounge went to get my case for me. I think headed out to the landside taxi area to get a cab to Ubud, which is about 90 minutes away (there are set prices advertised).

The lounge at Jakarta’s new T3 was very good but it was unfortunate that the flight was delayed and the food not particularly nice. We got there safely, though, which was the most important thing in that stormy weather. The crew were welcoming and polite.