Delta’s daily nonstop service between Boston and London departs Logan International in the evening (1952) and departs Heathrow in the morning (0940).

Since December 4, the route has been served by a refurbished Boeing 767-400ER. Delta is currently retrofitting its entire fleet of B767-400ERs with premium economy seats (called Premium Select) and a new business class seat, with 9 out of 21 aircraft completed at the time of writing. Technically these aircraft have four classes if you include Comfort+, a set of 28 economy seats at the front of the cabin with 34 inches of legroom rather than 31. See the seat plan here, plus our reviews of economy and business.

Delta says Boston is its newest hub, and it will be launching nonstop flights from the city to Gatwick (year-round from May 21) and Manchester (from May 21 to September 7) this year. 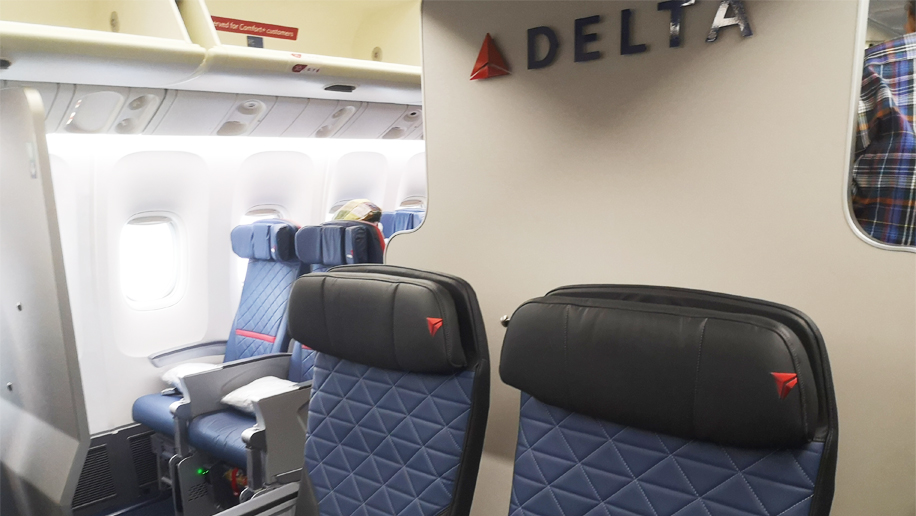 I took the Boston T train on the blue line to the Airport stop, arriving at 1810 ahead of my 1952 flight on a Saturday night. From here a free shuttle bus picks you up to take you to the actual airport. There are two buses which take different routes, so make sure you check which terminal you are flying from. Delta uses Terminal A, and the drive took just over five minutes.

I had been the only person on the shuttle bus, and entering the terminal I seemed to be one of the only people in there too. A member of staff was playing the song ‘Africa’ by Toto from her phone, and greeted me cheerily before checking my boarding pass. A quick pause to listen to the irrepressible chorus later, and I walked straight through security where there was no line, and staff were all cheerful. All told, it was one of the most unexpectedly pleasant arrivals at an airport I’ve had. 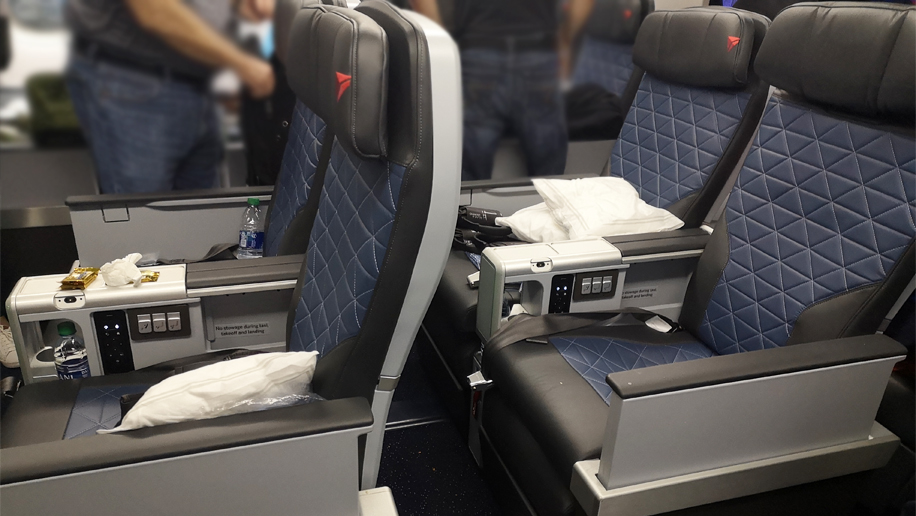 From here it was a 10 minute walk to gate A19, including time to buy a magazine. At the gate it was finally busy, assuaging my fear that I’d managed to turn up at the totally wrong time. Passengers with additional mobility needs boarded first, followed by Delta One and Diamond members at 1905, and Premium Select at 1910. 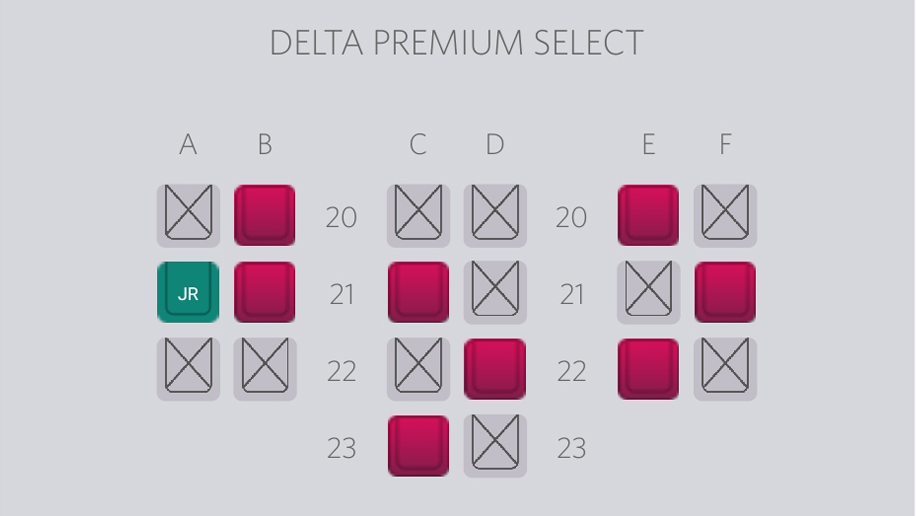 By 1920 I was in my seat and being offered a glass of Prosecco, while coats were collected. The cabin was just over half full so there was plenty of overhead bin space, which made a change from my outbound flight. I managed to get a solo seat, so I had both the window to lean on and aisle access. You can’t stretch out like you can with an unoccupied seat next to you in economy due to the large armrest, although this usually provides an additional barrier to the passenger next to you. 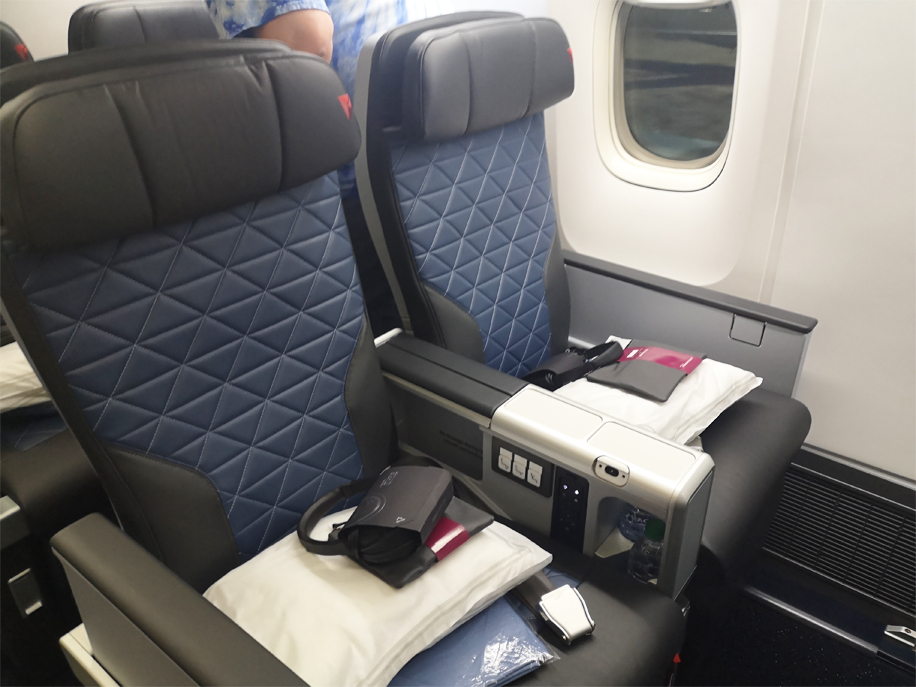 The design is subtle and smart, with strips of blue and black leather. The seat area feels a lot more spacious than in economy, especially as I had it to myself. The seat gives a generous 38 inches of legroom (versus 31 inches in economy) and 19 inches of width (versus 18.1 in economy).

Recline is decent at 7 inches (it’s 4 inches in economy) and the tray table folds out from the seat arm so it’s not affected by the person in front reclining. The IFE screen moves so you can keep it at your preferred angle. 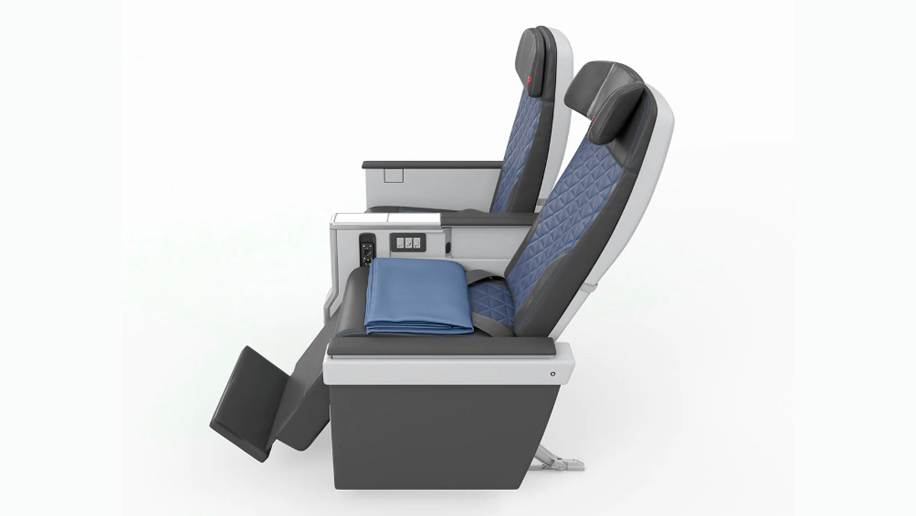 In the seat in front were two USB charging points, two universal plug sockets and a little slot that you could squeeze a book into. The IFE screen was large at 13.1 inches. It’s not usable until after the safety video has been played. 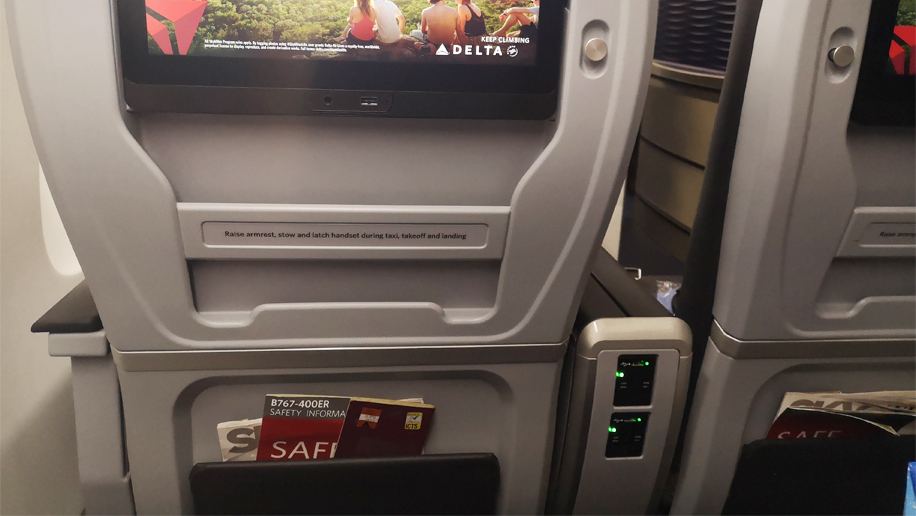 The armrest has enough space to place a phone or some other small items on top. Over-ear headphones are provided, and slot into two prongs so you can’t use your own, unlike in economy. There is also a small waterbottle holder, as well as a remote for the screen and some seat controls. 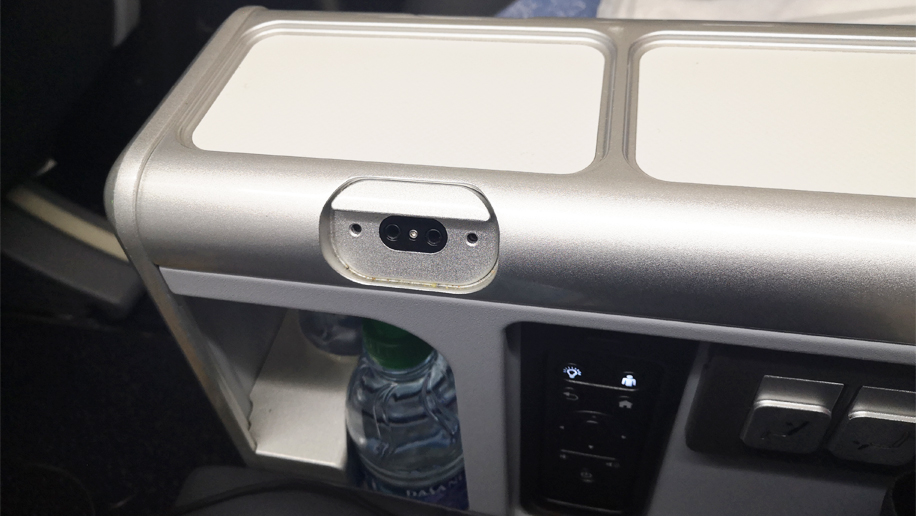 Ultimately, the current style of most premium economy seats – including this one – doesn’t actually allow you to sleep that much more easily than in economy. I slept for a few hours, but that was mainly because I had a travel pillow and could lean on the window. 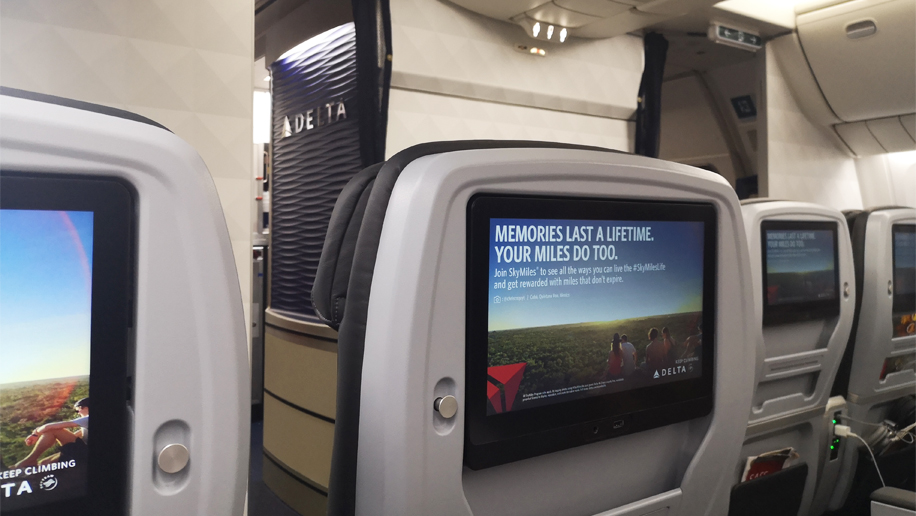 Go for 20A if you want heaps of legroom, aisle access plus a window. The flight attendants on my flight were very quiet and I couldn’t hear any noise from the galley even though it was near my seat (21A). 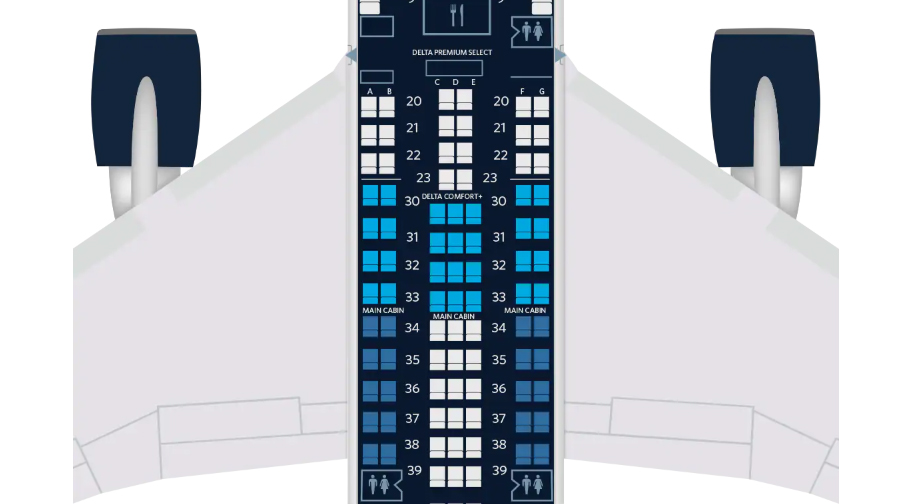 While waiting for takeoff I looked through the amenity kit. I often use the Tumi washbag I got on a Delta One flight in 2018. Now I have a small one to go with it. It came with an eyemask, socks, toothbrush/toothpaste, a face wipe and a Malin and Goetz lipbalm.

The tray felt firm enough to work with a laptop on, and could be folded in half to give you a bit more space while still in use. 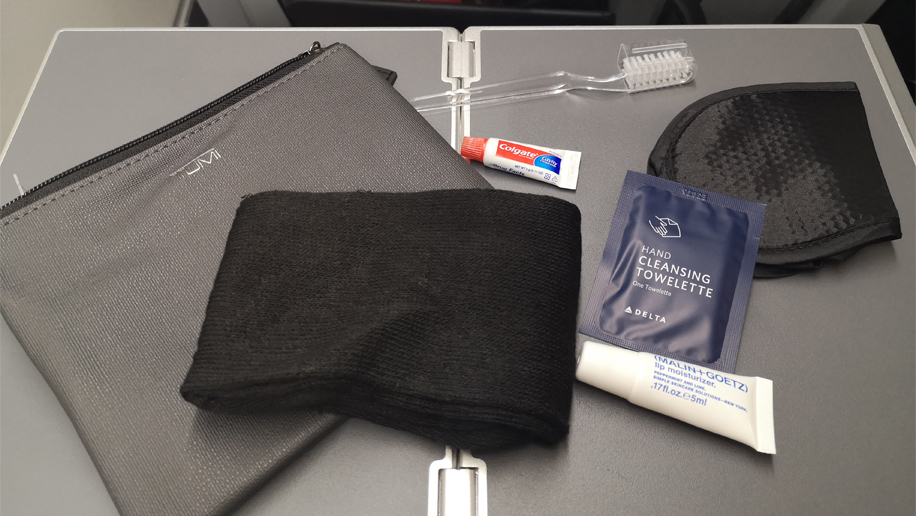 We pushed back at 1950 and took off a little behind schedule at 2005. The lights were dimmed and pink mood lighting came on. 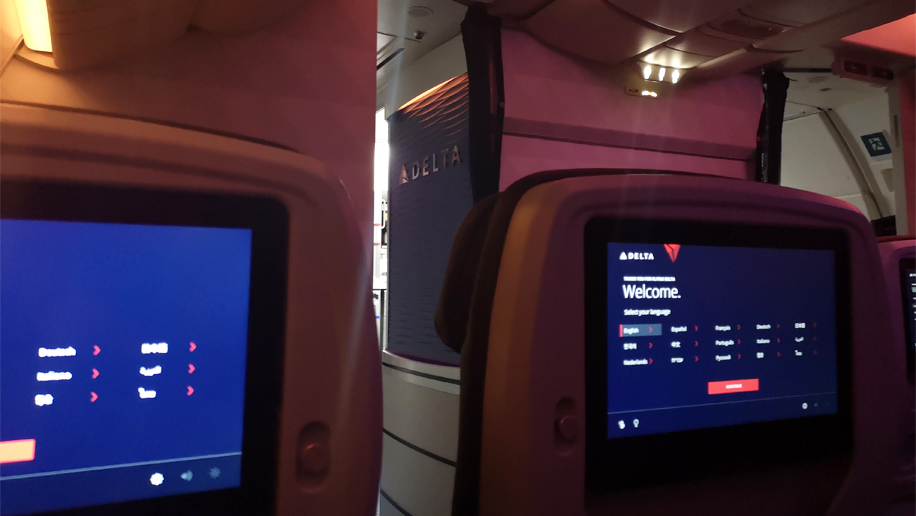 There were two flight attendants serving the premium economy cabin. At 2022 we were given a hot scented flannel, and at 2037 we were given drinks and a packet of nuts, which were laid on a white tablecloth. I had a glass of Californian Merlot.

We were given a menu, which you also now get in economy. 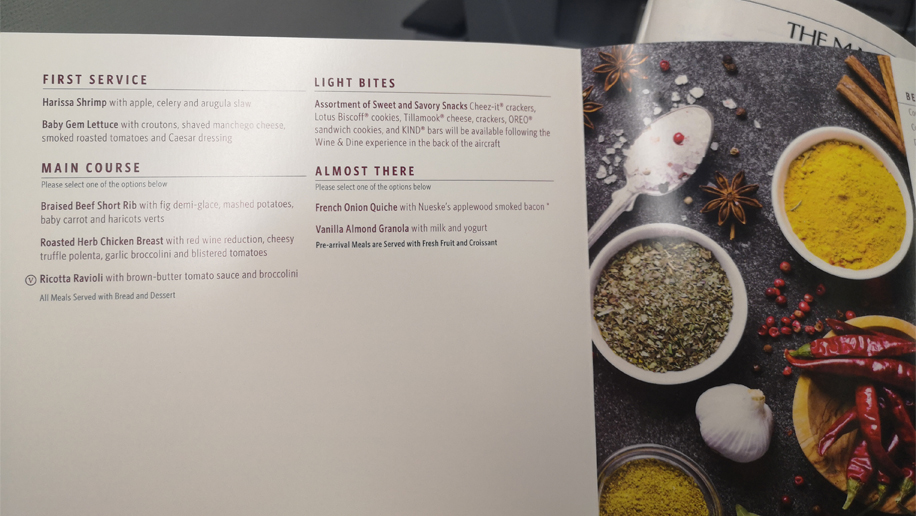 While I was waiting for dinner I reclined my seat and had a look through the IFE options. At this point my screen started to glitch. First it was slow to respond to touch, then it froze entirely. The remote didn’t work either, so I read my magazine instead.

The pillow provided was fine, and the blanket was a good weight for keeping you not too hot and not too cold, though it was a slightly strange, plastic-like texture. 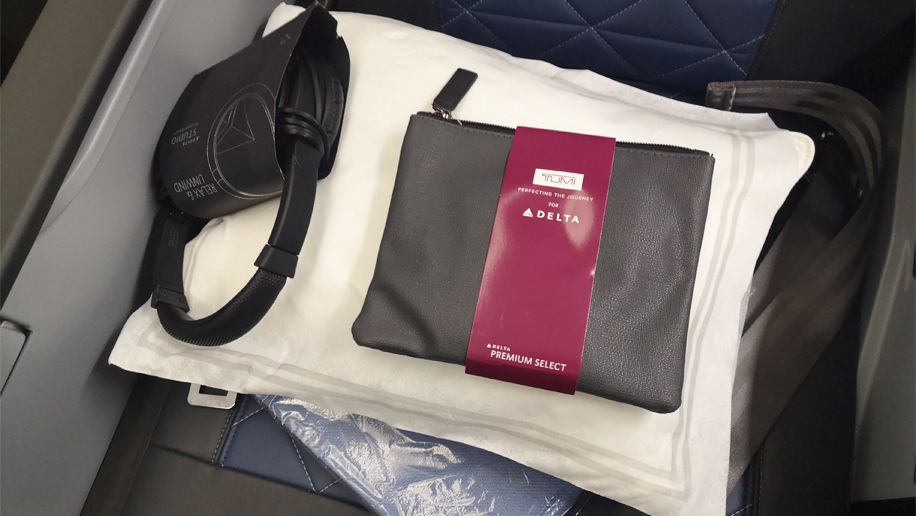 The main meal was served around 15 minutes later. I went for the Harissa prawns with apple, celery and rocket, with the braised beef short rib with mashed potatoes, carrots and green beans. This was served with a side salad, roll and chocolate mousse.

I enjoyed the starter and main. The meat was cooked well, the mashed potatoes were creamy and the gravy complemented them. The flash on my camera made it look inedible when photographed, so I’ve blurred the image below a little. 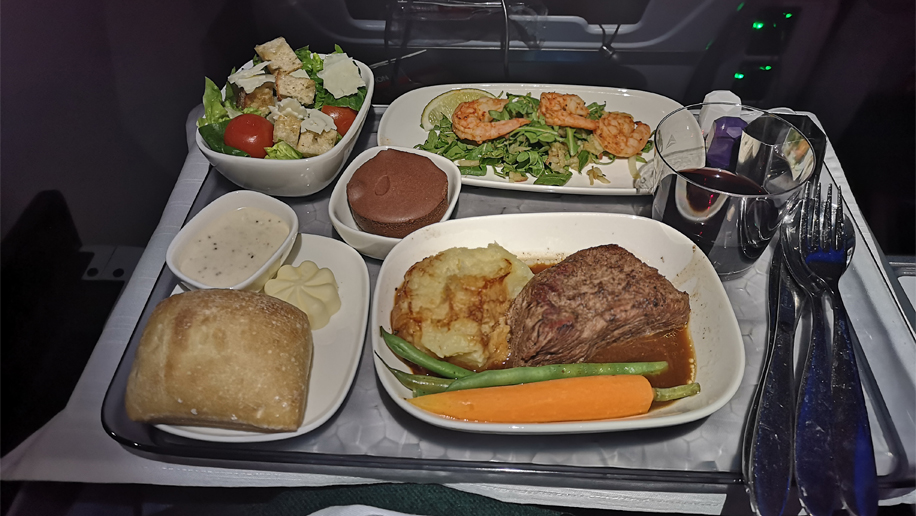 The flight attendant serving my side of the aircraft was incredibly attentive, constantly checking whether people wanted drink top ups or had any issues.

At this point I raised the problem with my IFE. She reset the system but it still didn’t work. I decided to just get some sleep and let them know it wasn’t working in the morning, but I would have been really annoyed if it was the outbound daytime flight when I wanted to watch some films. I overheard someone else also having a problem with their screen. 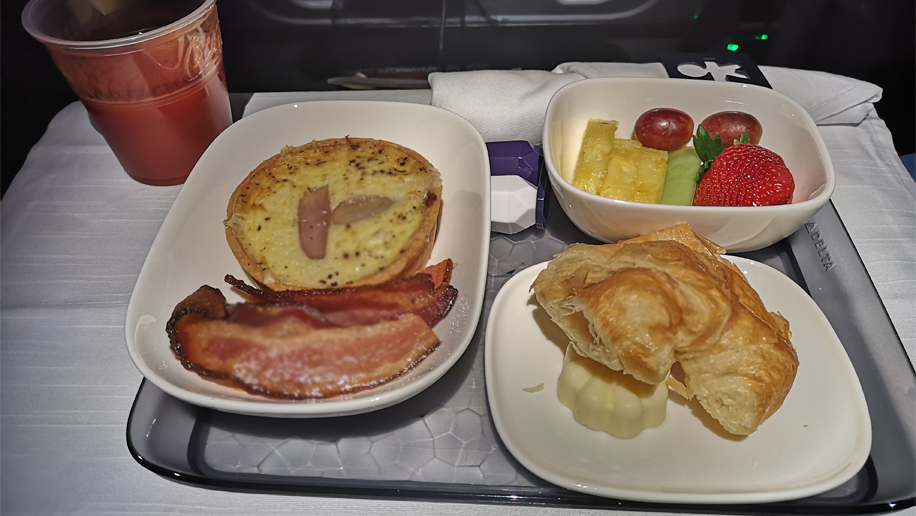 I woke up 30 minutes before landing and had missed breakfast, but the flight attendant sped over and offered me a choice of onion quiche with bacon or granola. I went for the hot option, which was served with fresh fruit and a croissant. We landed early at 0655 local time.

Whether Premium Select is worth the price tag (about double that of economy) depends on how much you value more attentive service in a smaller cabin, extra legroom, priority boarding/disembarking and an amenity kit.

Though you get more space and privacy from the passenger next to you, the seat itself would not be much of a draw for me on a day flight, given that the new economy seats are comfortable and you can pay for Comfort+ (between economy and premium economy) for 34 inches of legroom. I had a good flight, although the IFE could have been a bigger issue on a different day. 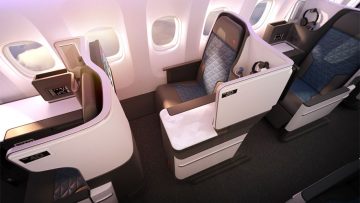