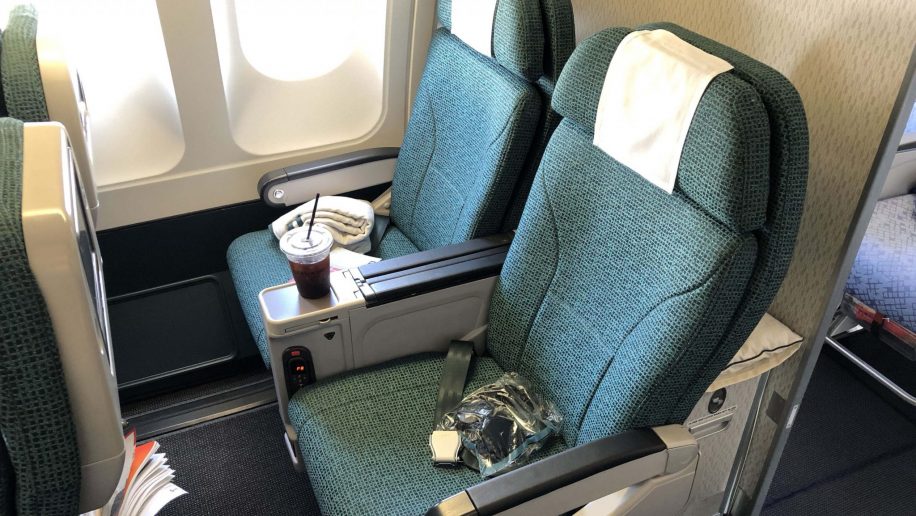 The Hong Kong to Singapore route links two competing Asian financial centres and sees the cities’ rival flag carriers, Cathay Pacific and Singapore Airlines, battle it out for customers as the only full-service carriers flying this route.

If you manage to book onto one of Singapore Airlines’ Airbus A350s or A380s on this route, you can enjoy a pretty comfortable premium economy product that was rolled out in 2015. 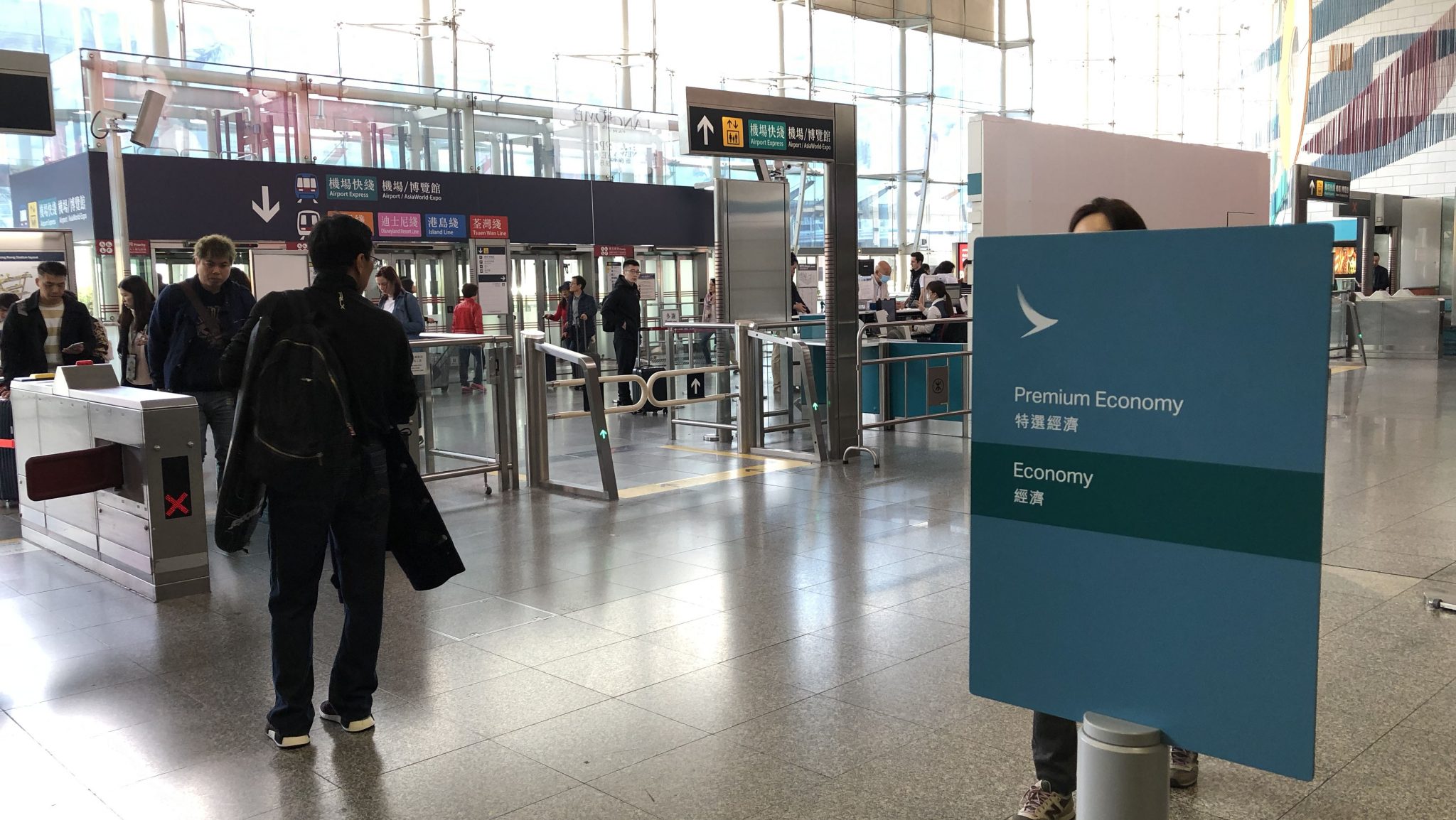 In Hong Kong, I used the In-town Check-in at Hong Kong Airport Express station so as not to have to carry my suitcase to the airport. The walk through the underground air-conditioned passageway between Central station and Hong Kong station seemed eerily quiet, possibly because many people had already left the city for Chinese New Year. 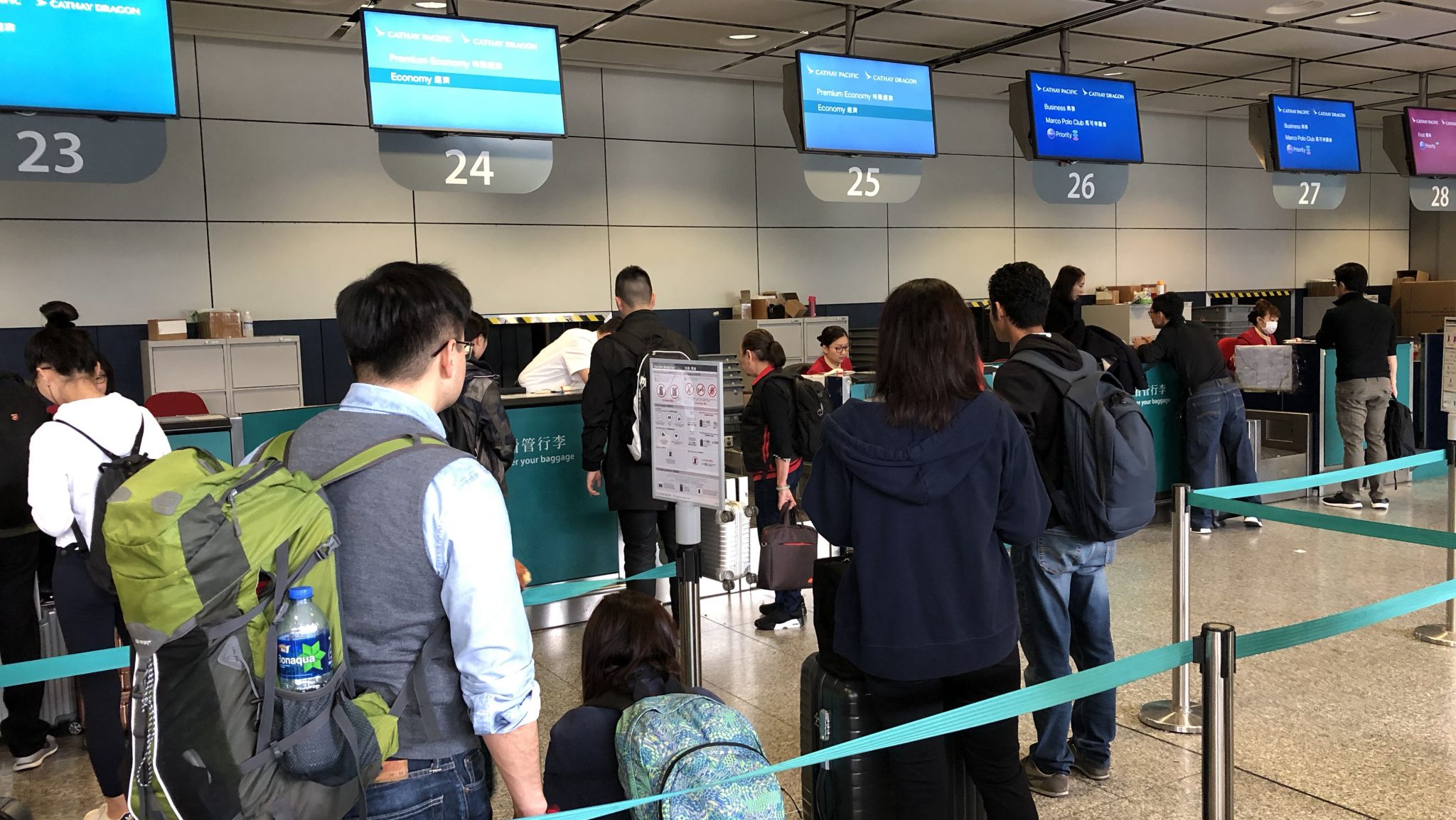 There were 11 people ahead of me in the In-town Check-in queue and four members of staff were working to check in economy and premium economy passengers, who share the same queue. The queue moved swiftly and I waited only about 10 minutes.

The check-in attendant assigned me an aisle seat (32H). I asked if I could switch to a window seat (as I like looking out the window), but she told me the flight was full. Considering that due to the peak time of year I had had to pay more for my ticket than you often need to pay for an economy class flight all the way to North America, it was a bit galling. 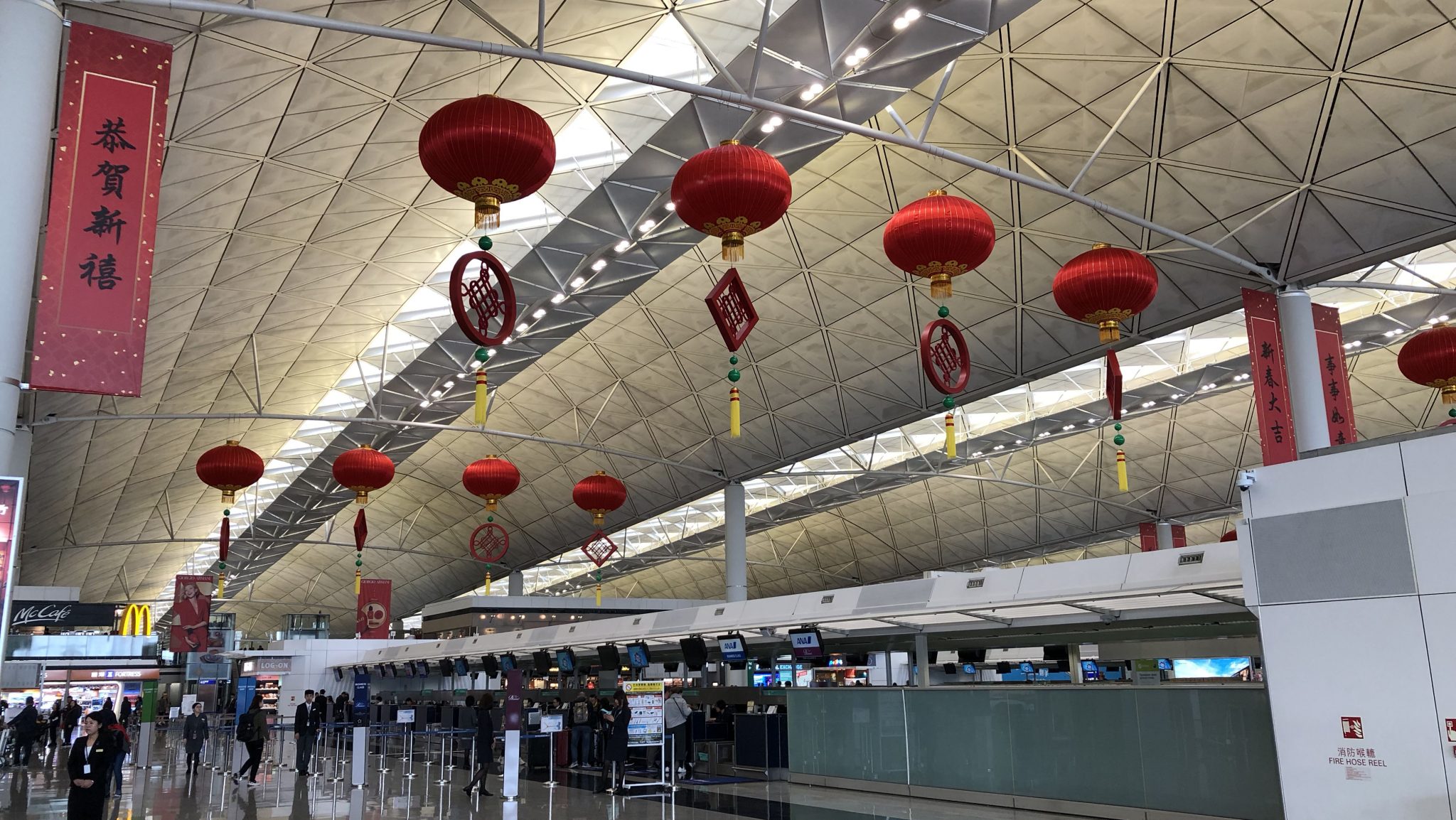 The Airport Express, as it invariably does, whisked me effortlessly to Terminal 1, which was decorated with Chinese New Year lanterns.

I cleared security and immigration smoothly. There are now no humans involved in the pre-security boarding pass and passport check; passengers scan their passport, enter one set of gates, scan their boarding pass and have their face scanned, then exit a second set of gates. When the gates were manned, there was usually a short but fast-moving queue, but with these new machines there was practically no queue at all. The camera recognised my face within a split second and the gates sprung open. Creepy, but efficient.

The Chinese New Year theme continued once I entered the boarding area. 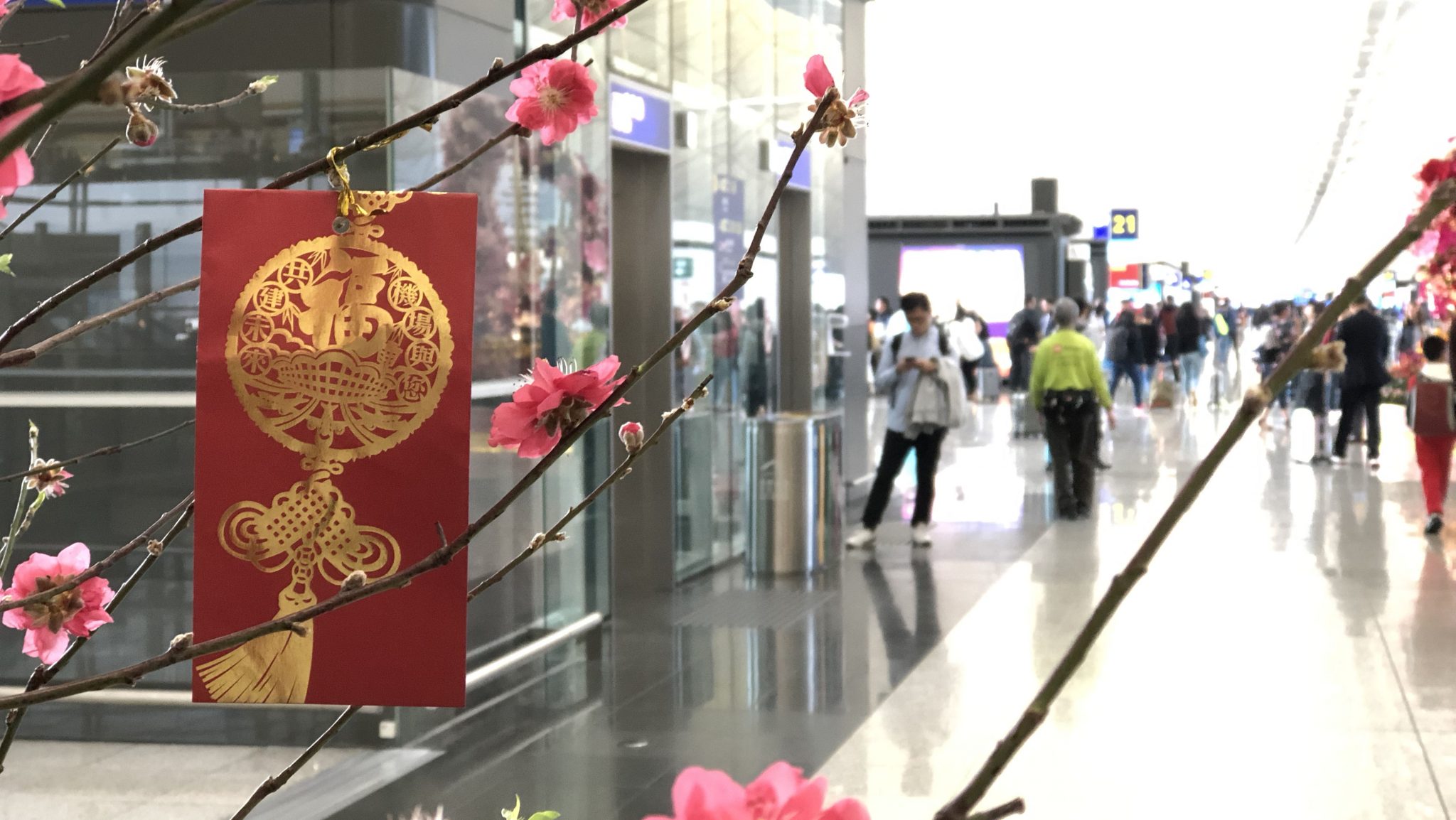 My flight was departing from Gate 35, which was a short walk away, expedited by the people movers. 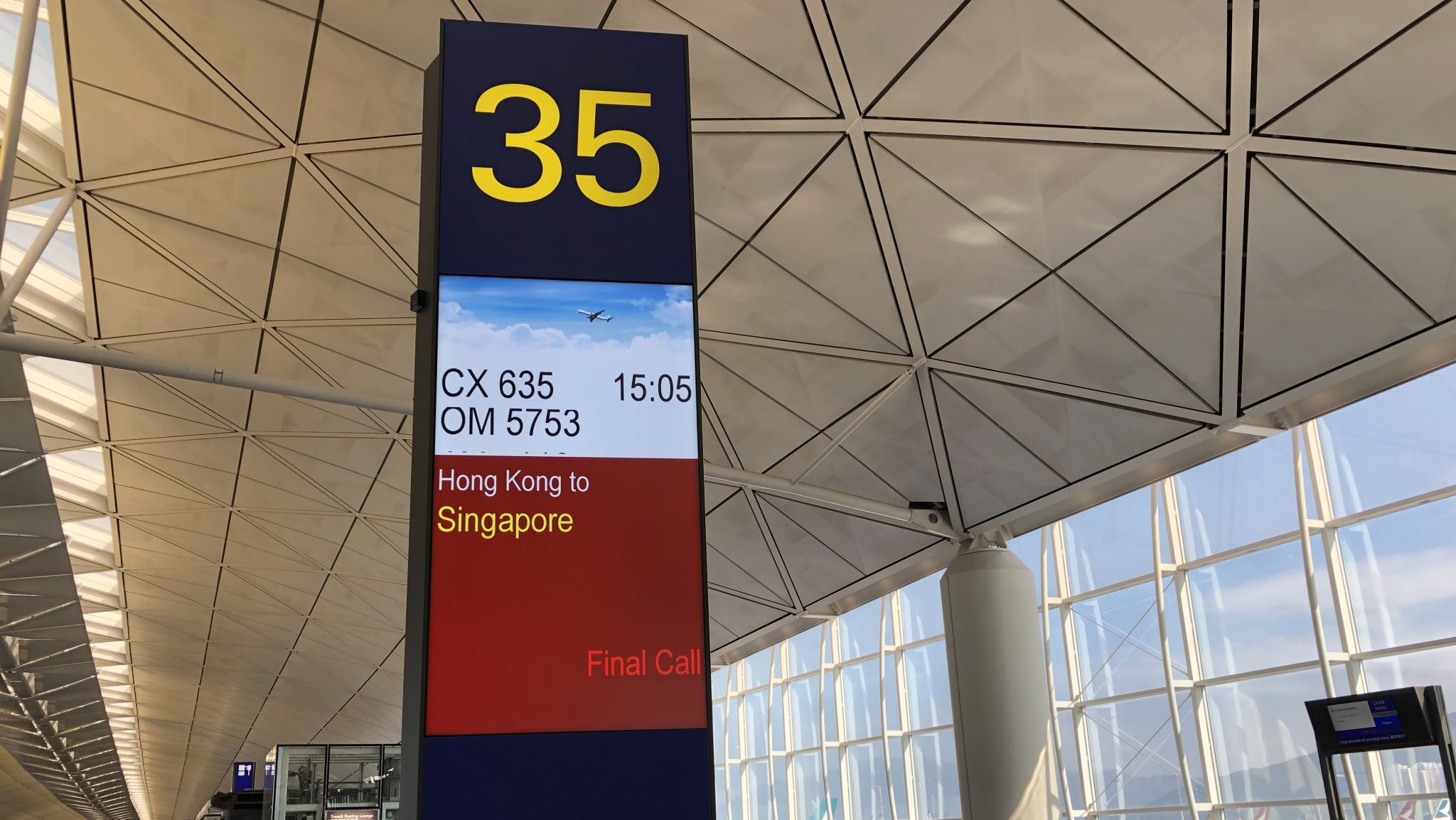 Boarding was orderly and efficient. 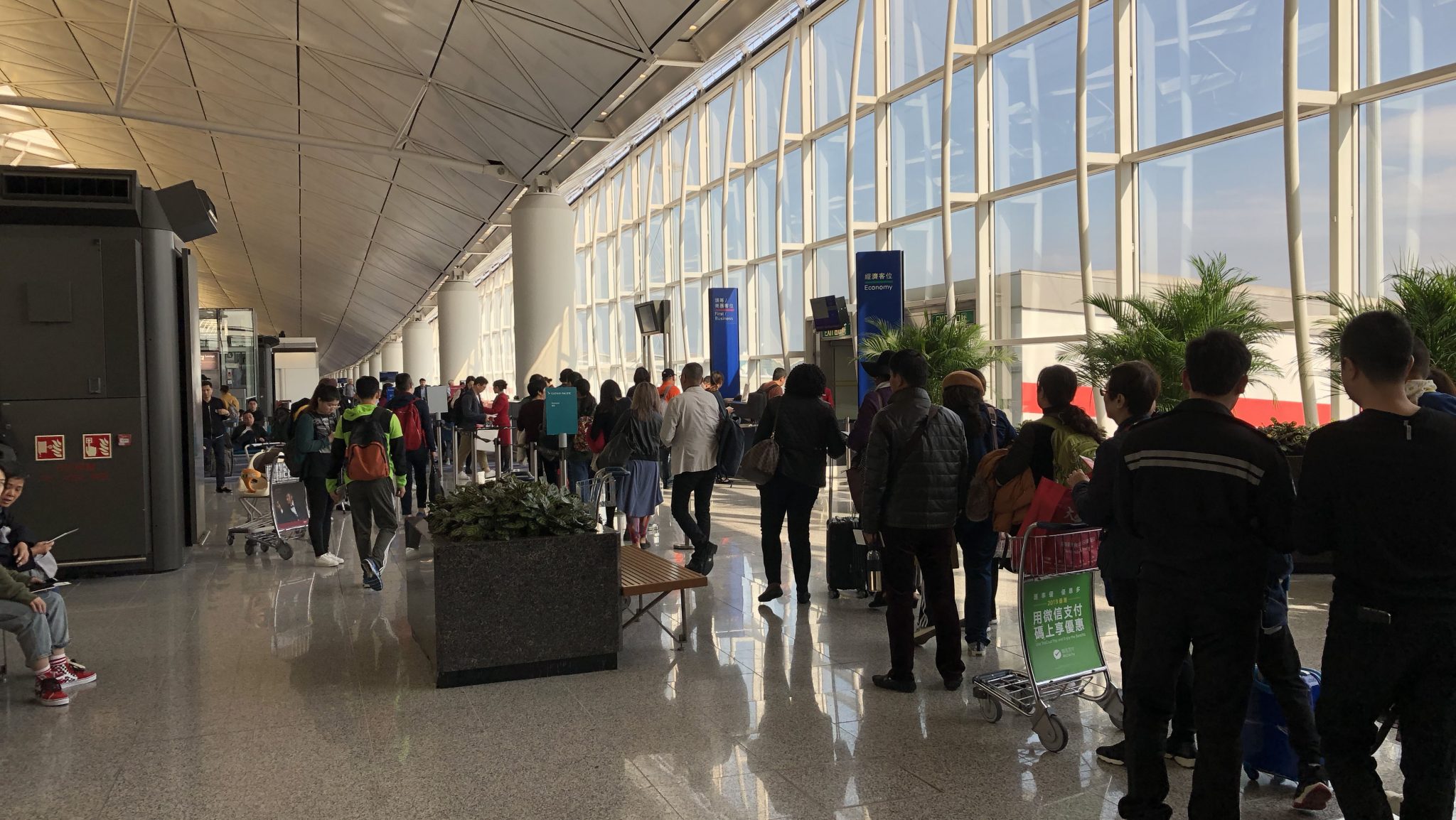 Premium economy class passengers have to use the same line as economy passengers, but I didn’t have to wait long. 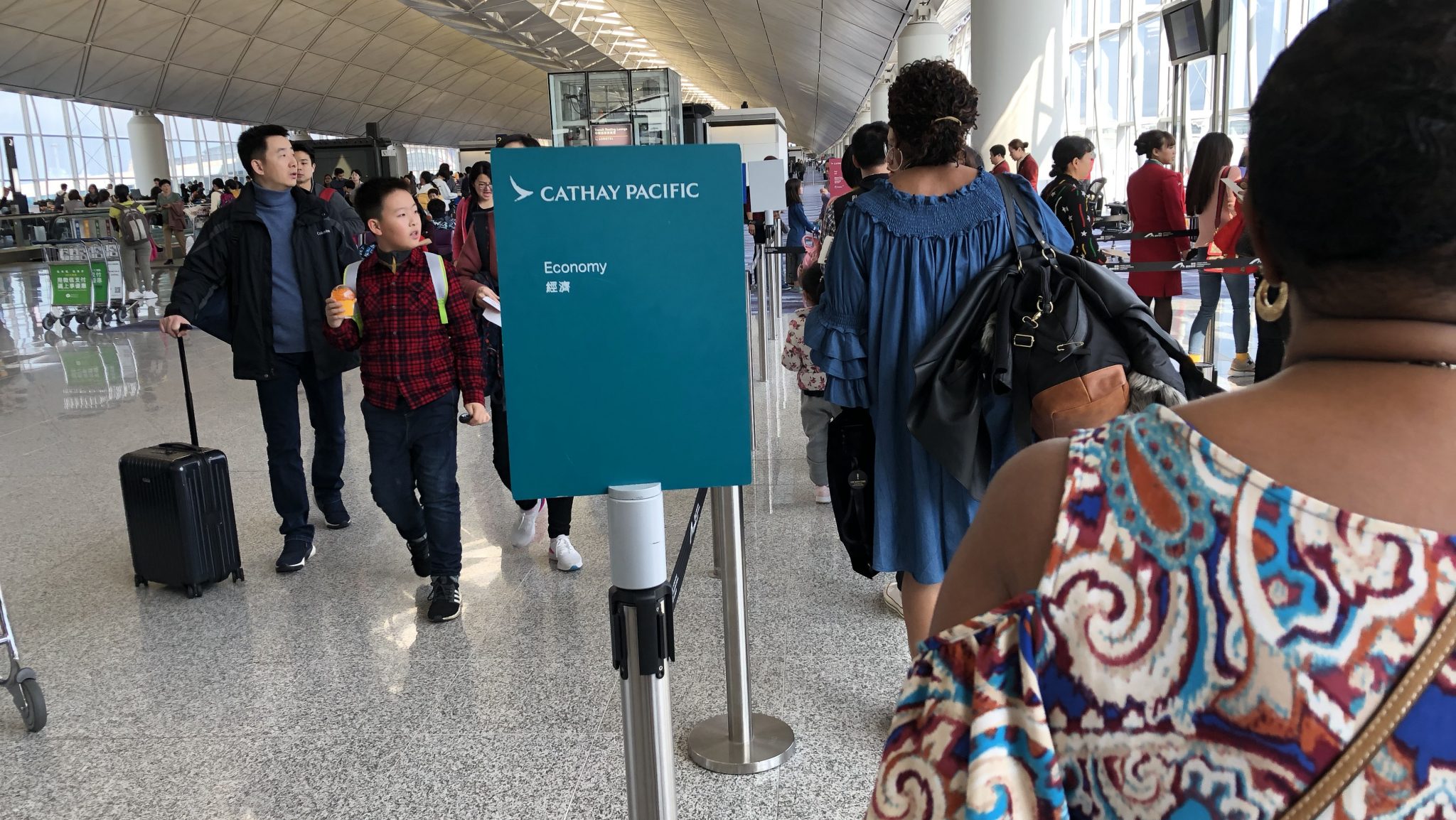 My seat, 32H, was at the back-right of the premium economy class cabin, which is small. 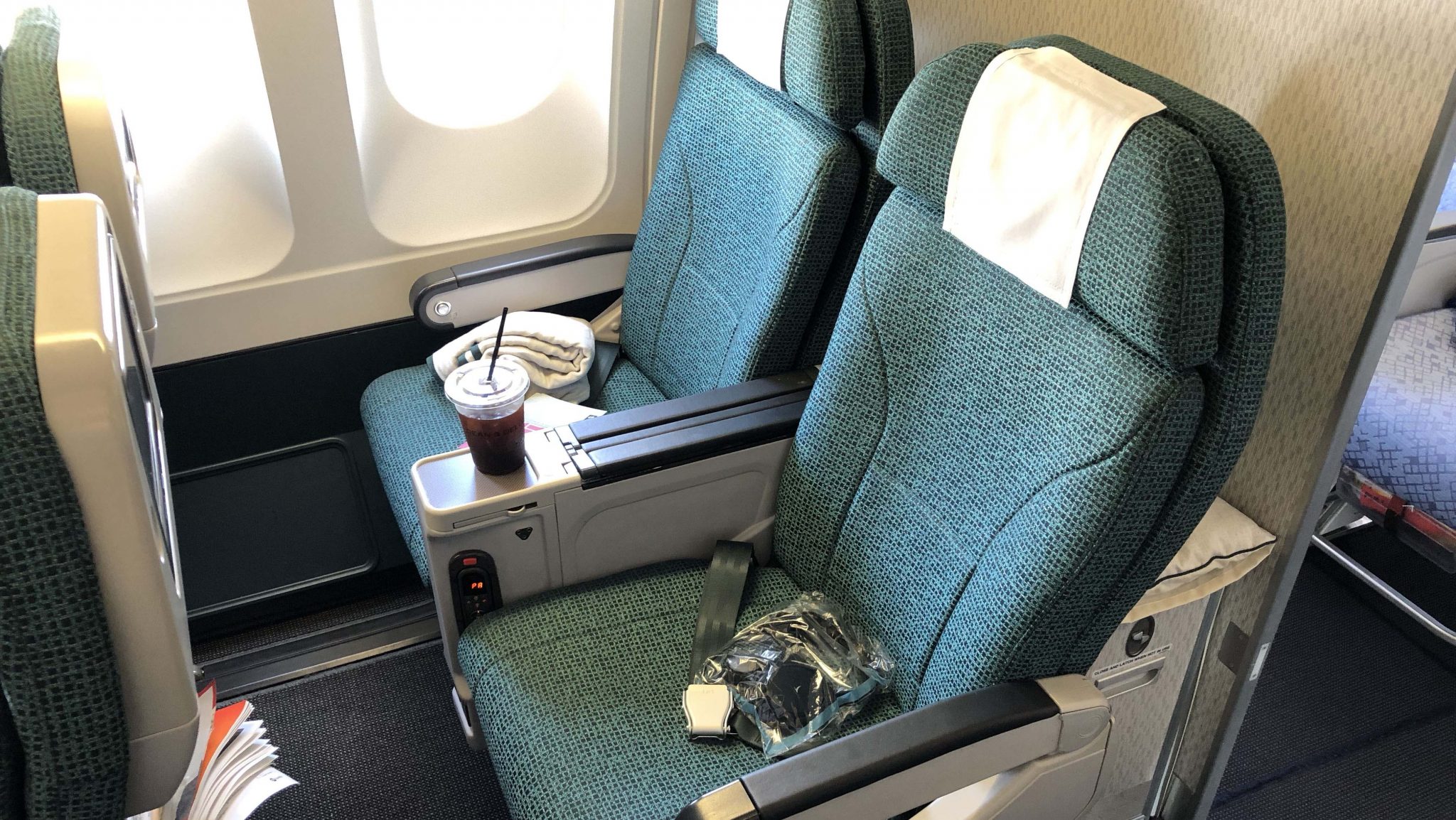 There are only three rows of 2-3-2 seating, giving the cabin an uncrowded feel. 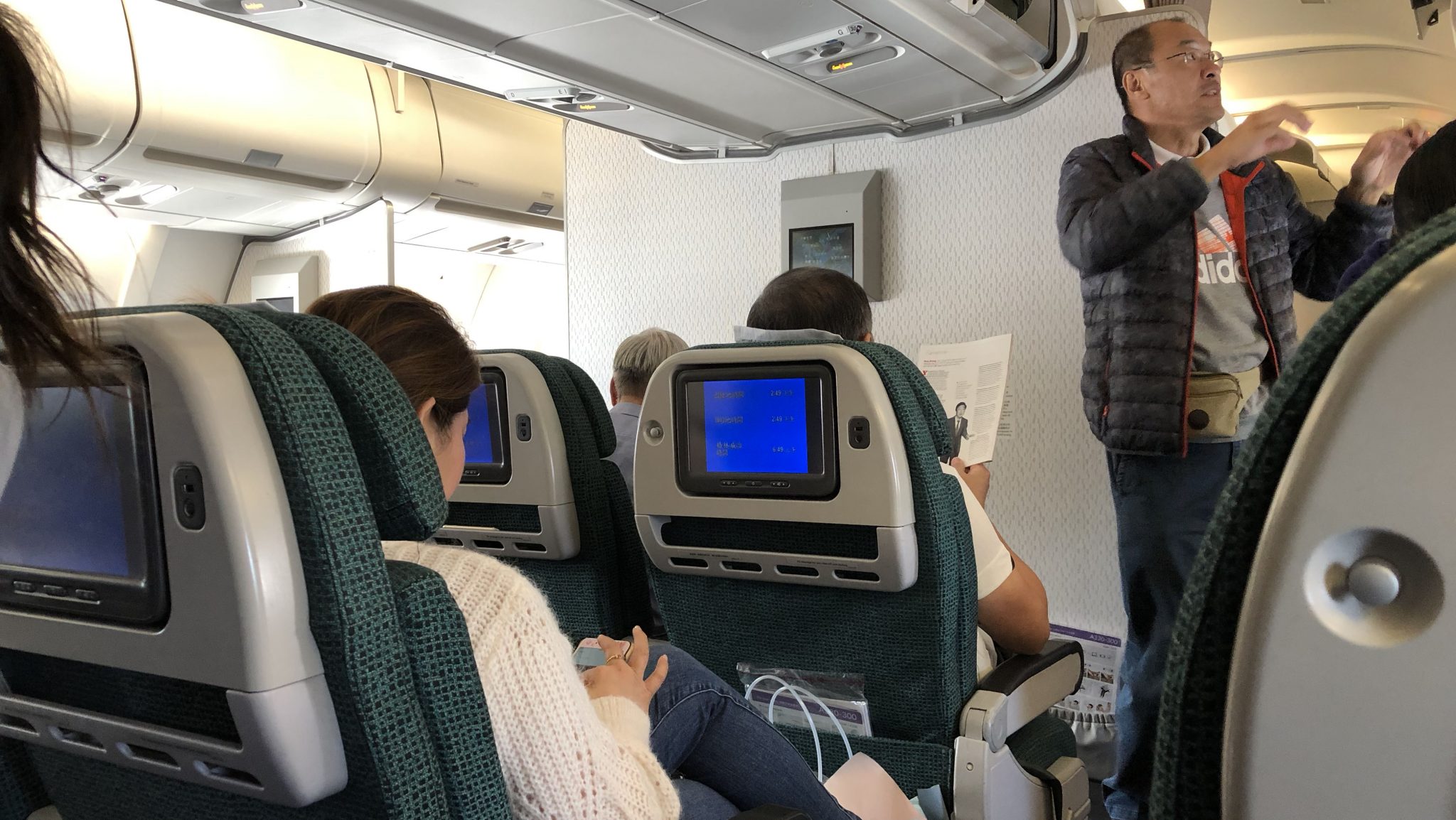 It also means that each passenger gets a decent amount of overhead storage space. Despite several passengers transporting their Chinese New Year gifts as hand luggage, I didn’t see anyone having trouble fitting their belongings into the overhead compartments. 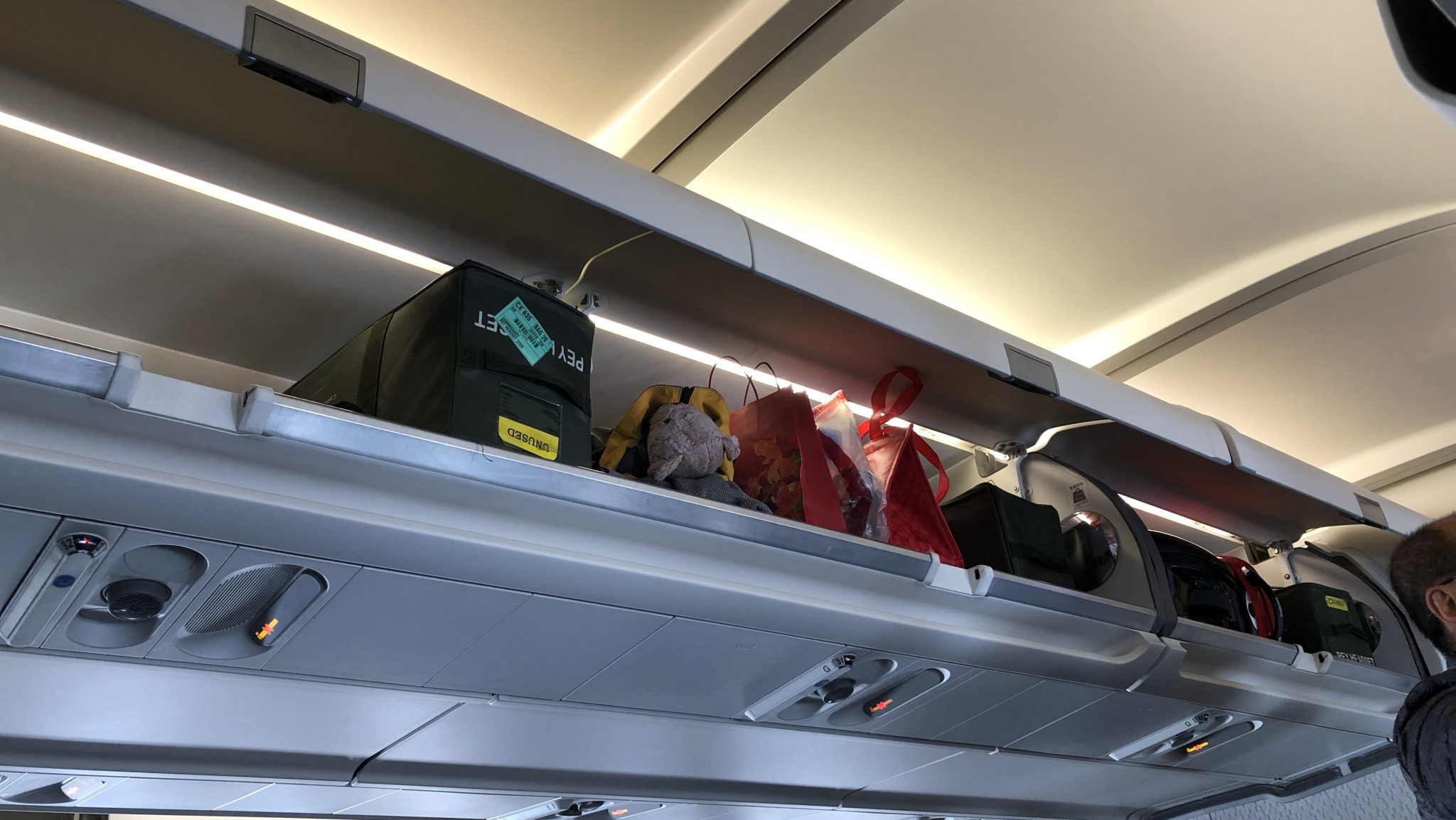 Compared with Cathay’s A330 economy class, which I reviewed last month, the legroom is a fair bit better – 39 inches to be precise – and also an inch wider at 19.3 inches. I was able to comfortable stretch out my legs, even when the storage space in front of me was full of my things. 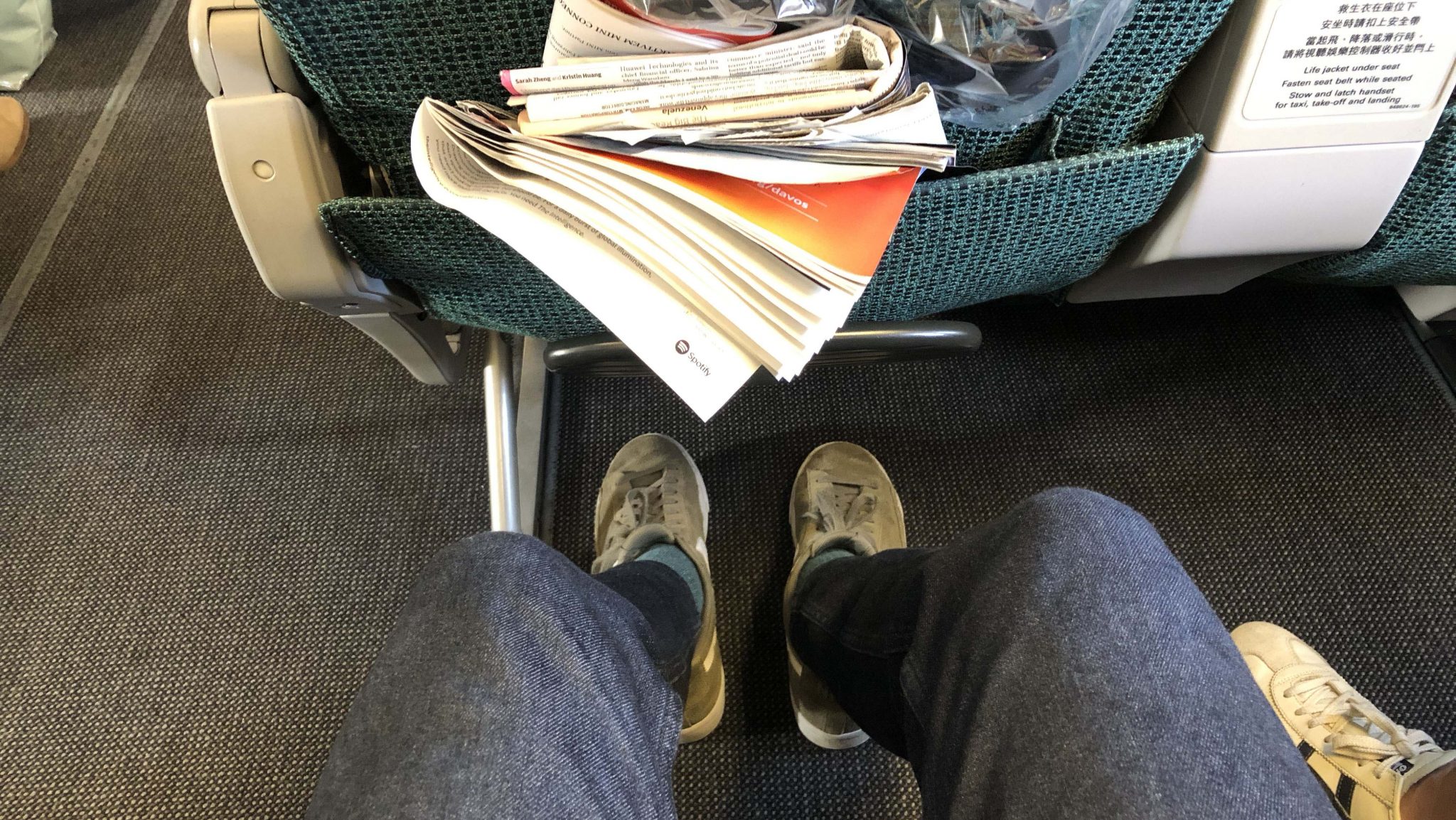 The seat-back screen in front is 10.6 inches and a considerably older looking version compared to the screen available on Cathay’s A350. 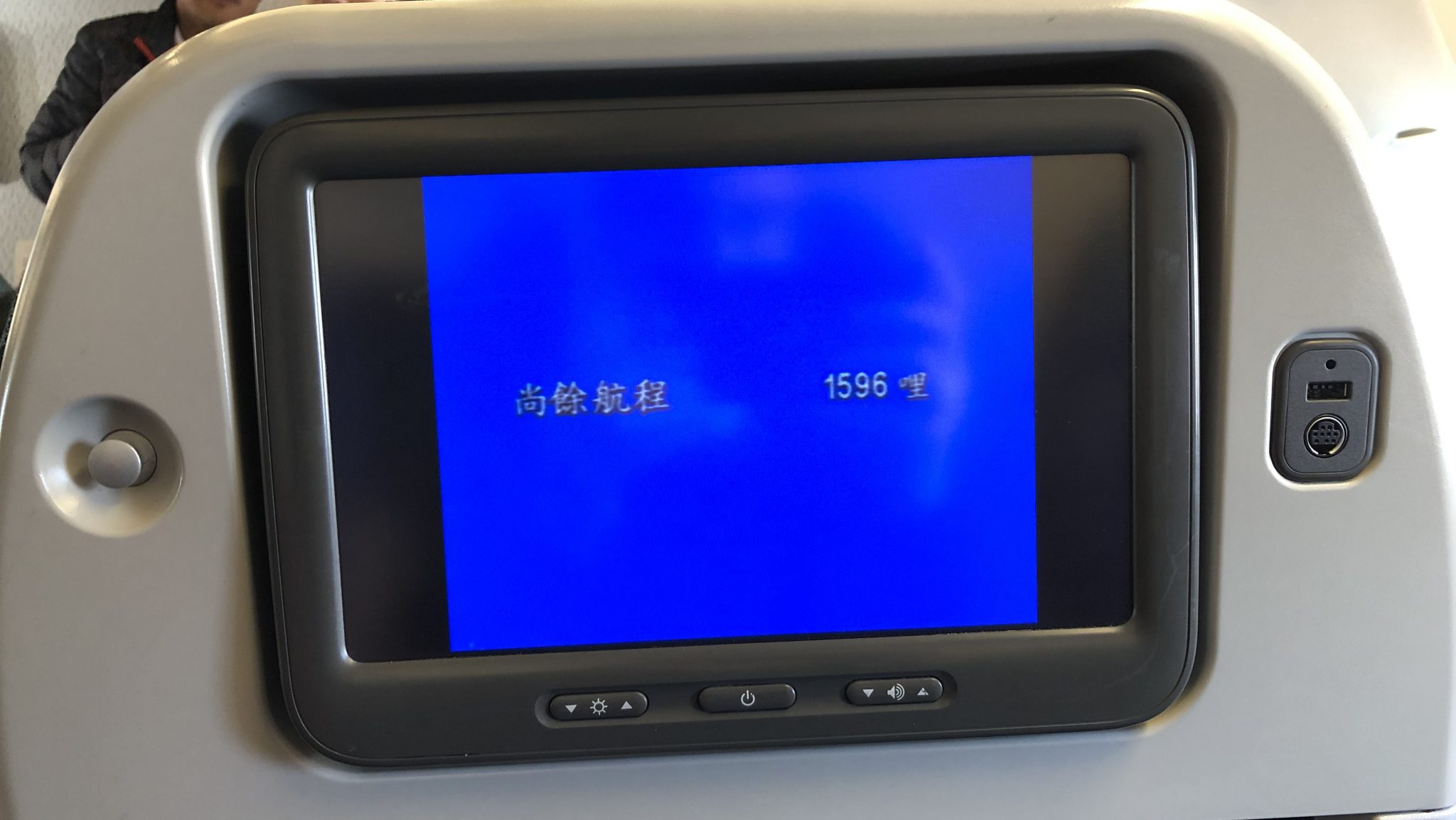 Indeed, this screen in premium economy on the A330 is worse than the one on the A350’s economy class, which features a touch screen and higher definition video. 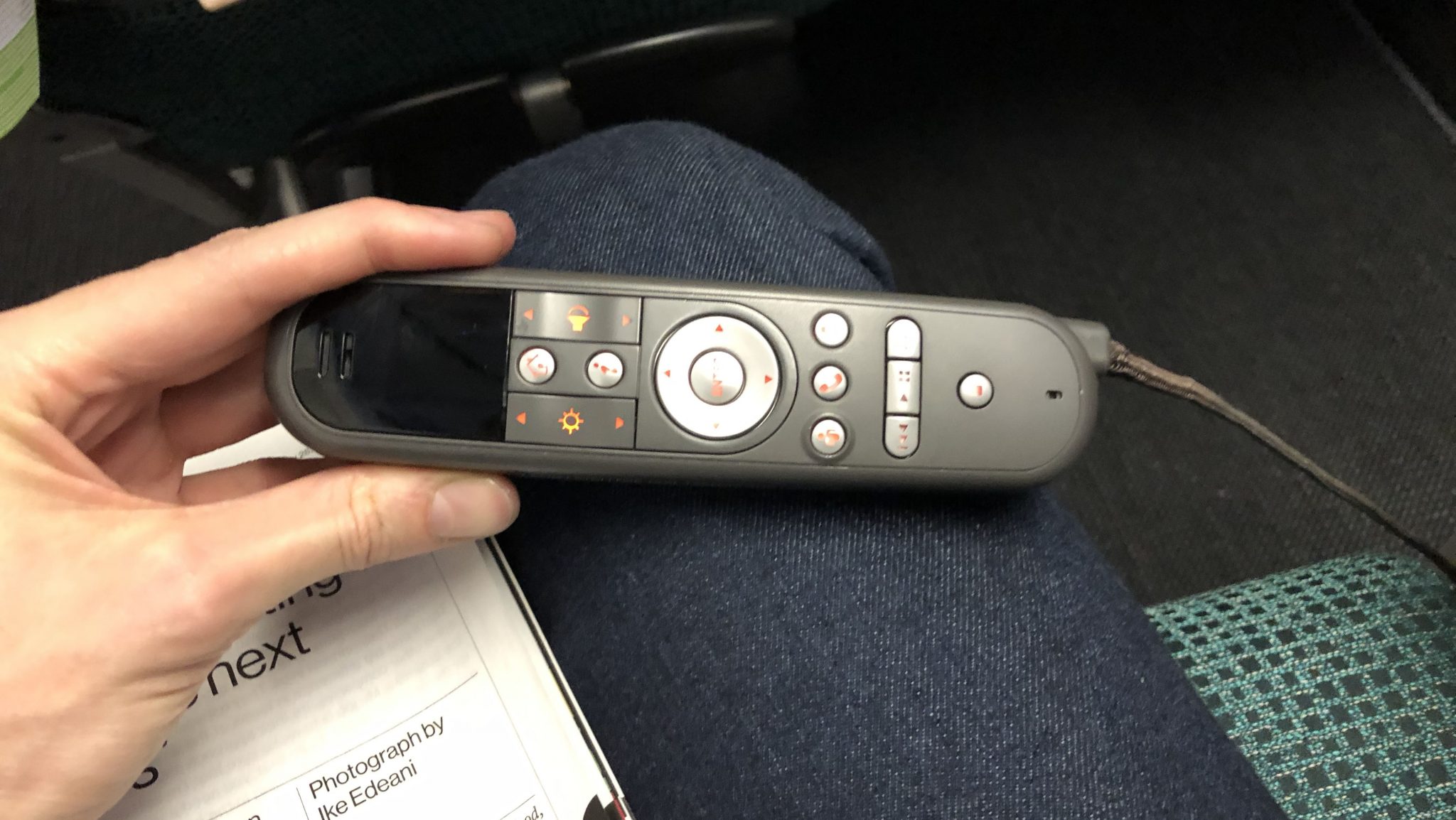 To the right of the screen is a USB port for charging your device. 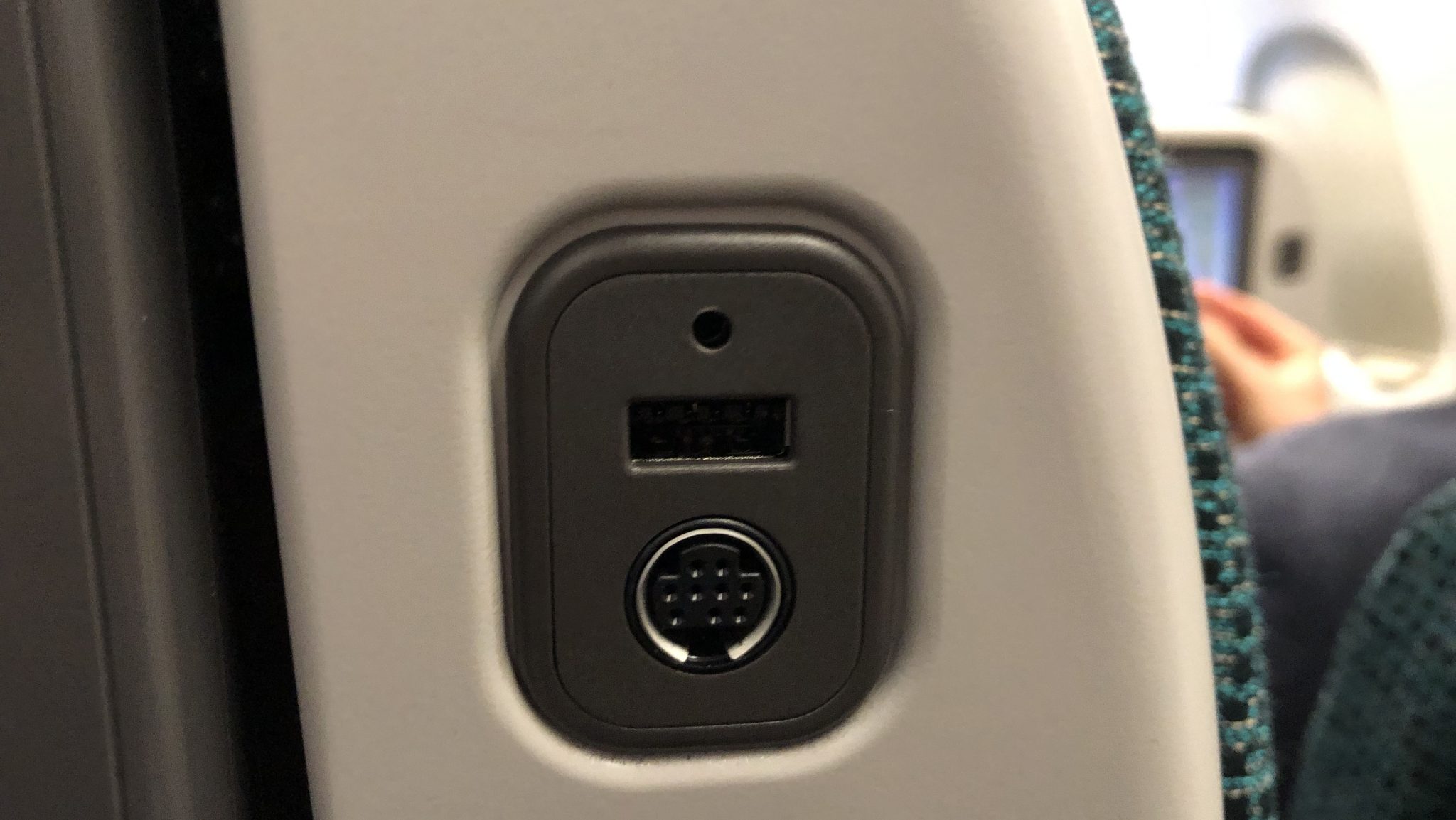 There is also a pull-out cup holder in the right arm rest. 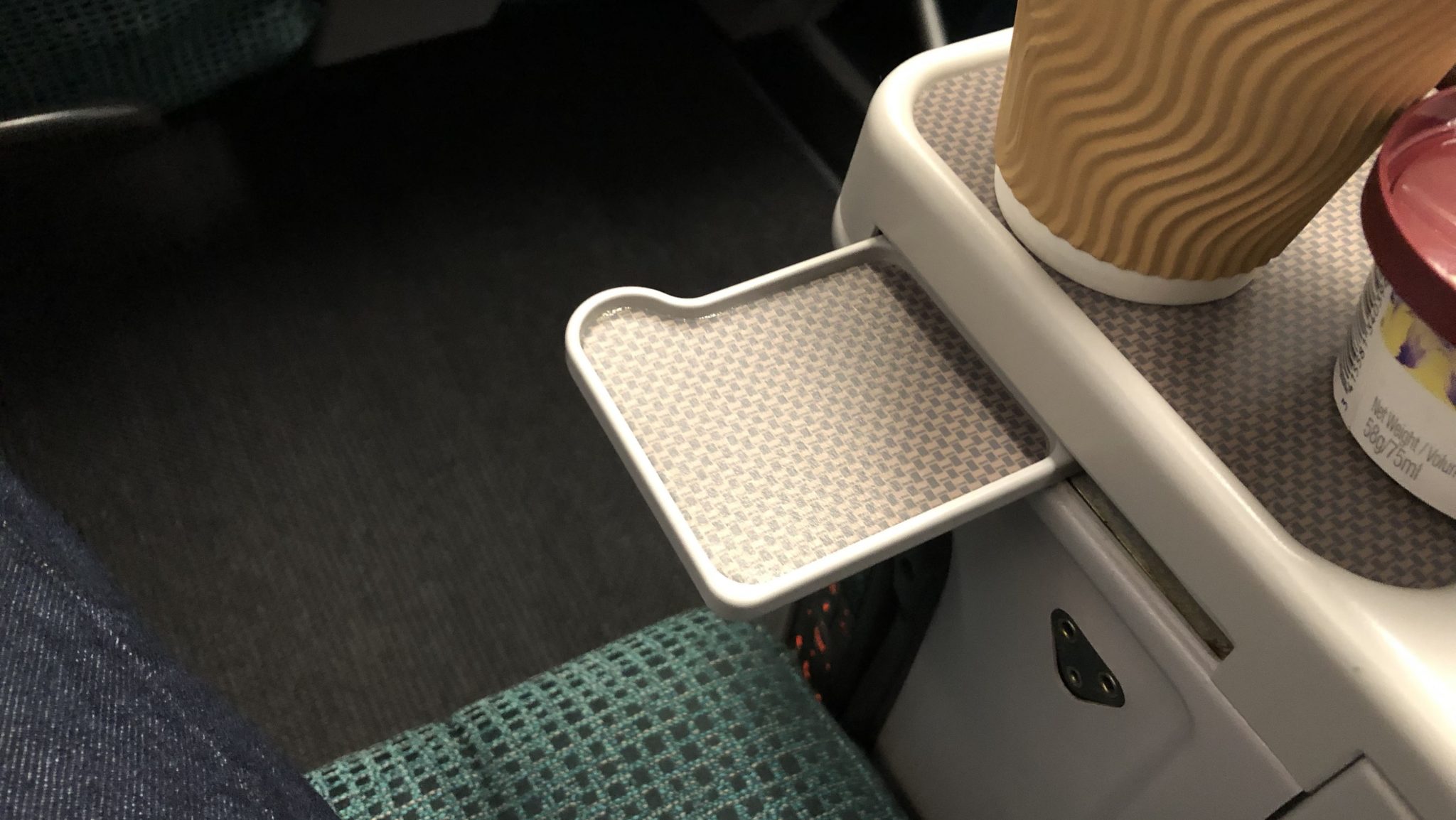 At 1450, a member of the cabin crew came through and offered us blankets, which I declined. At 1453, the cabin doors started to close for departure. The captain introduced himself and said there would be fairly smooth conditions for the flight and that we would meet our scheduled departure time.

Before the meal service began, I was offered a packet of peanuts and a napkin. This is also offered to economy class passengers. 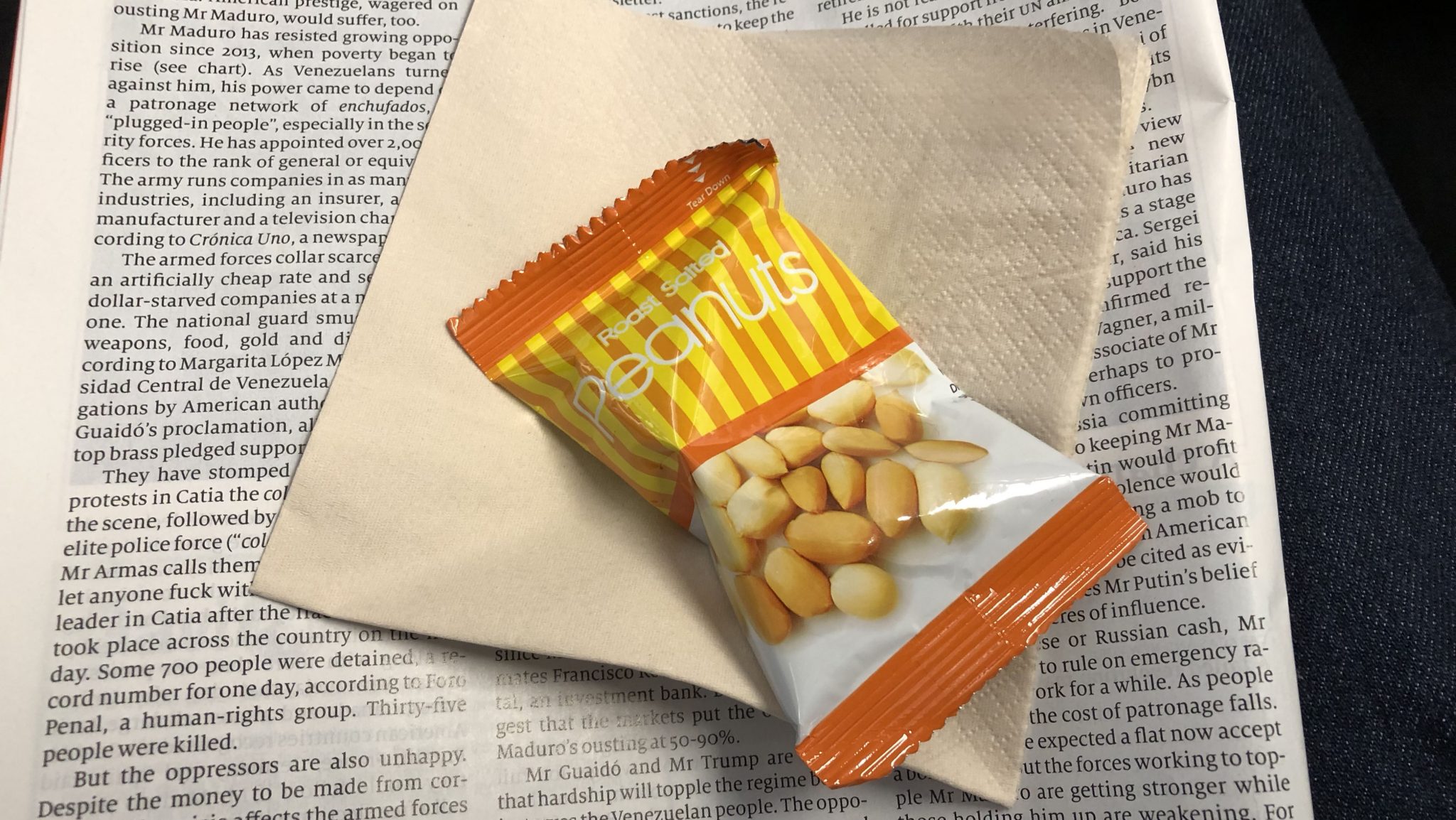 There was a choice of two options for the mains. I opted for the pasta bolognese, which was pretty tasty. 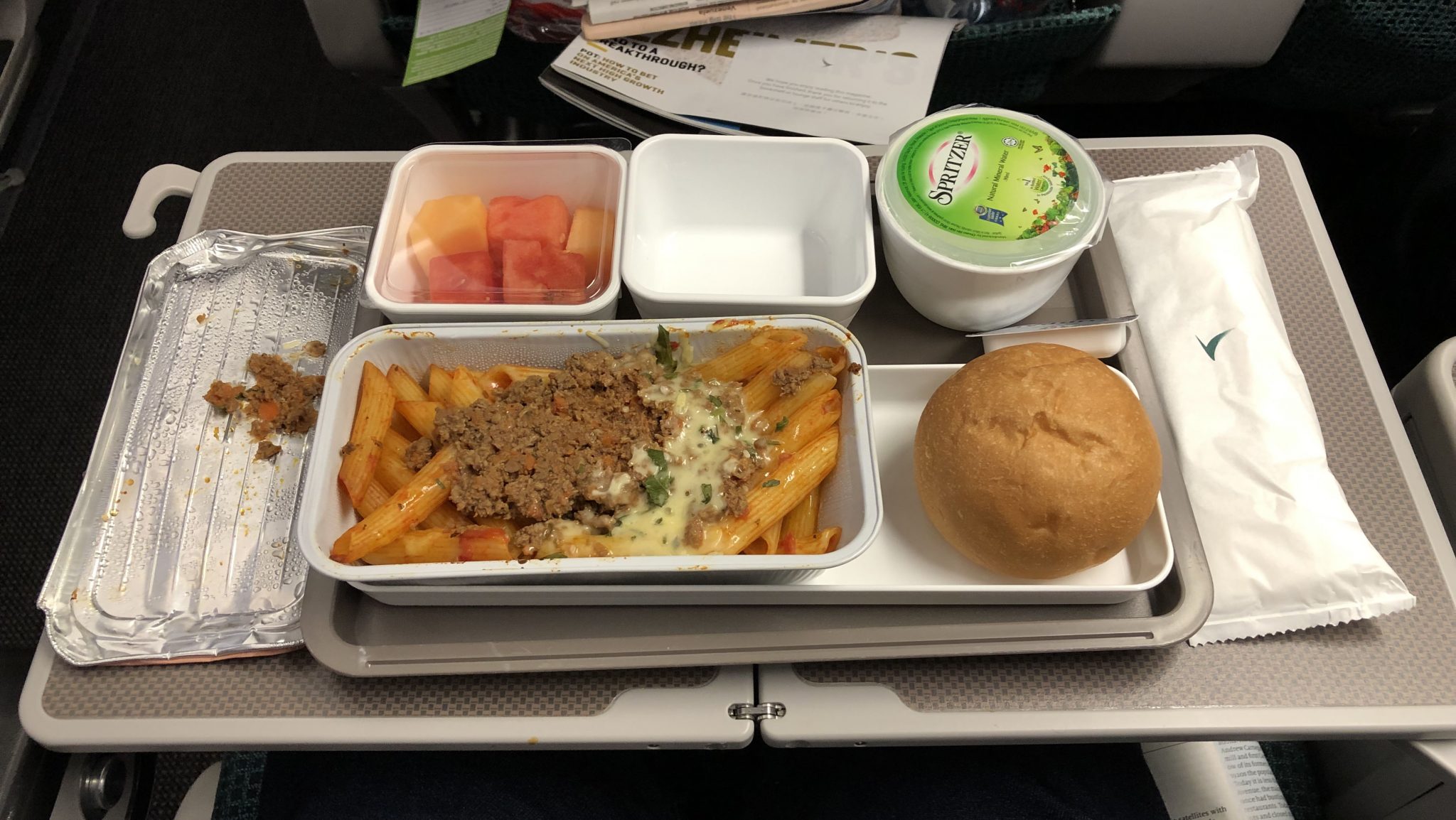 After the meal, I was given a pot of vanilla Haagen Daaz ice cream, which was rock hard. 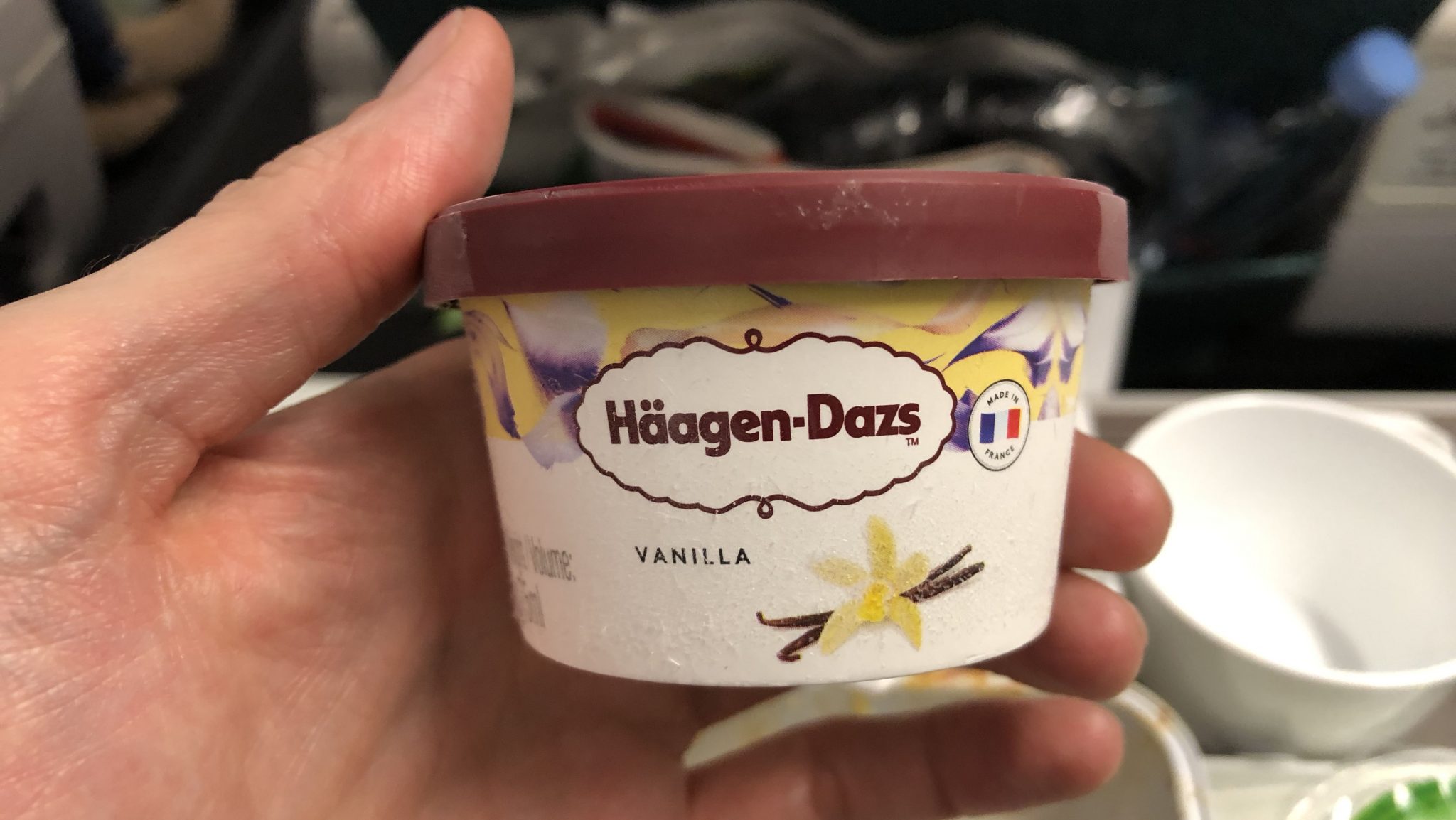 I waited about 15 minutes and ordered a coffee to go with the ice cream. I really enjoy the hot-cold pairing of the coffee and ice cream and always try to eat and drink them together in this way on flights. 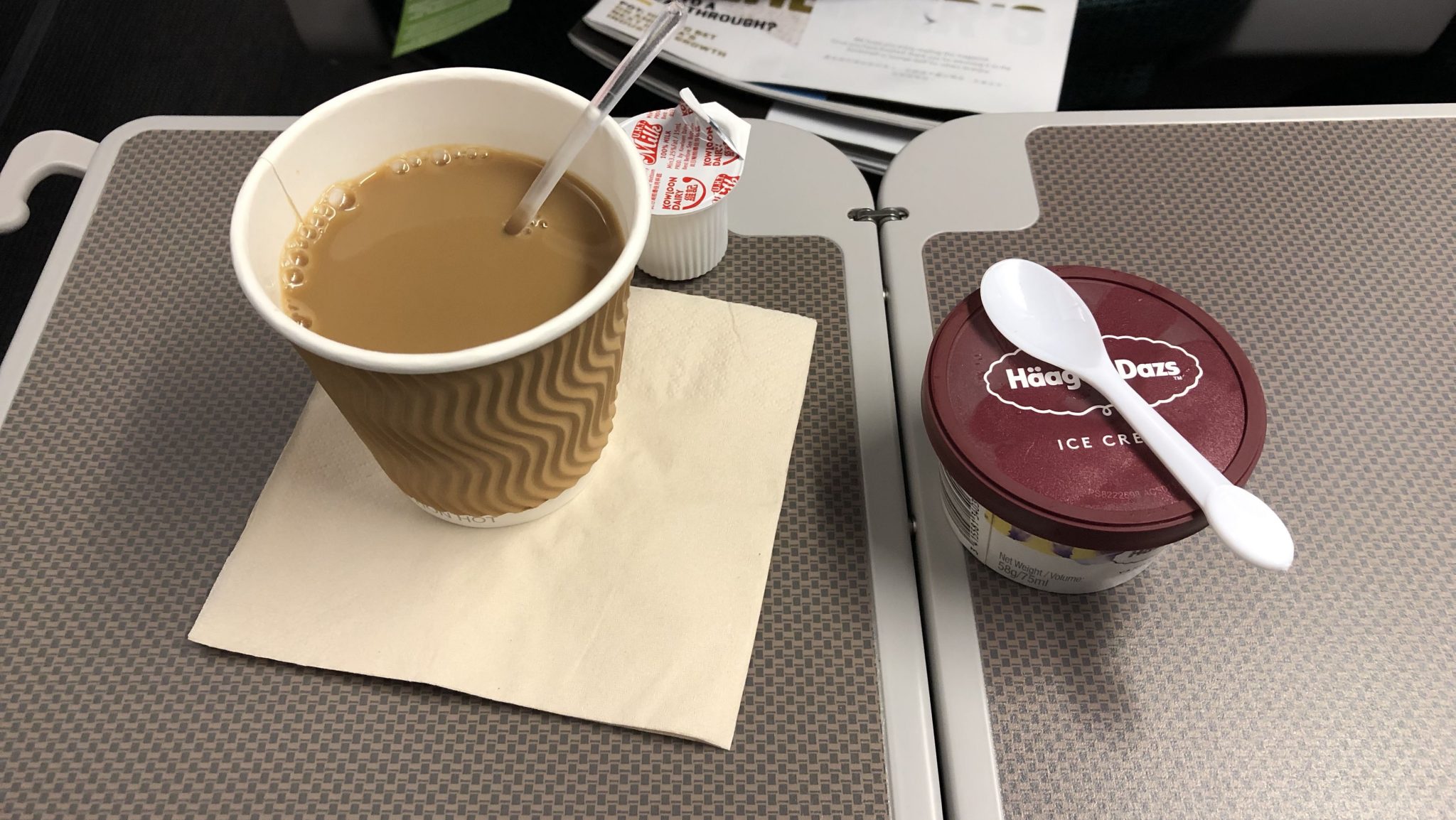 After the meal, I wanted to relax a bit. There is a footrest beneath the seat you can use to put your feet up. The recline on the seat is also impressive (8 inches). Economy recline is never enough for me to sleep properly, but this seat reclined enough that I would probably be able to get a decent rest on all but the longest flights. 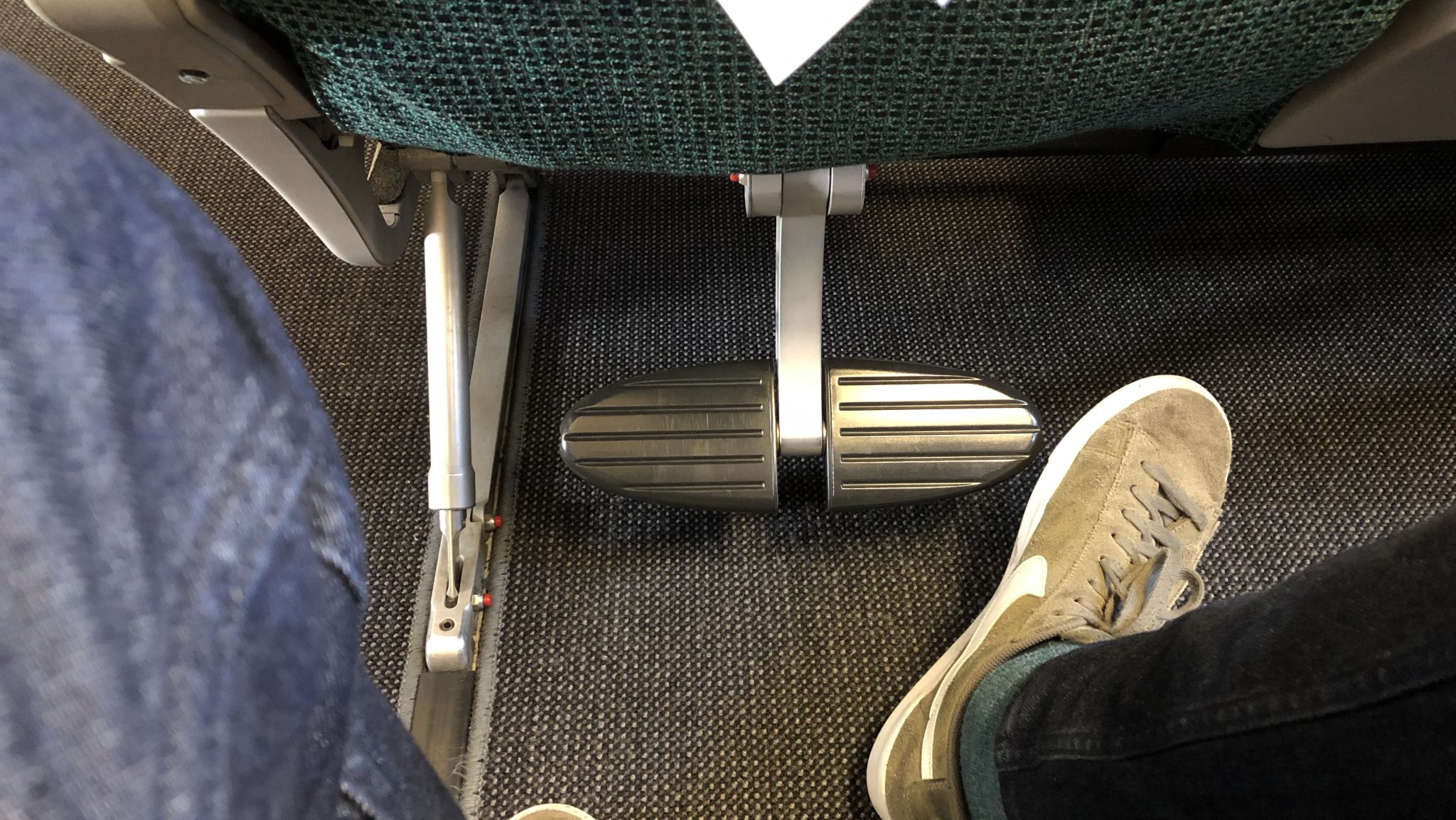 It was a seven-minute walk to immigration at Changi Airport. 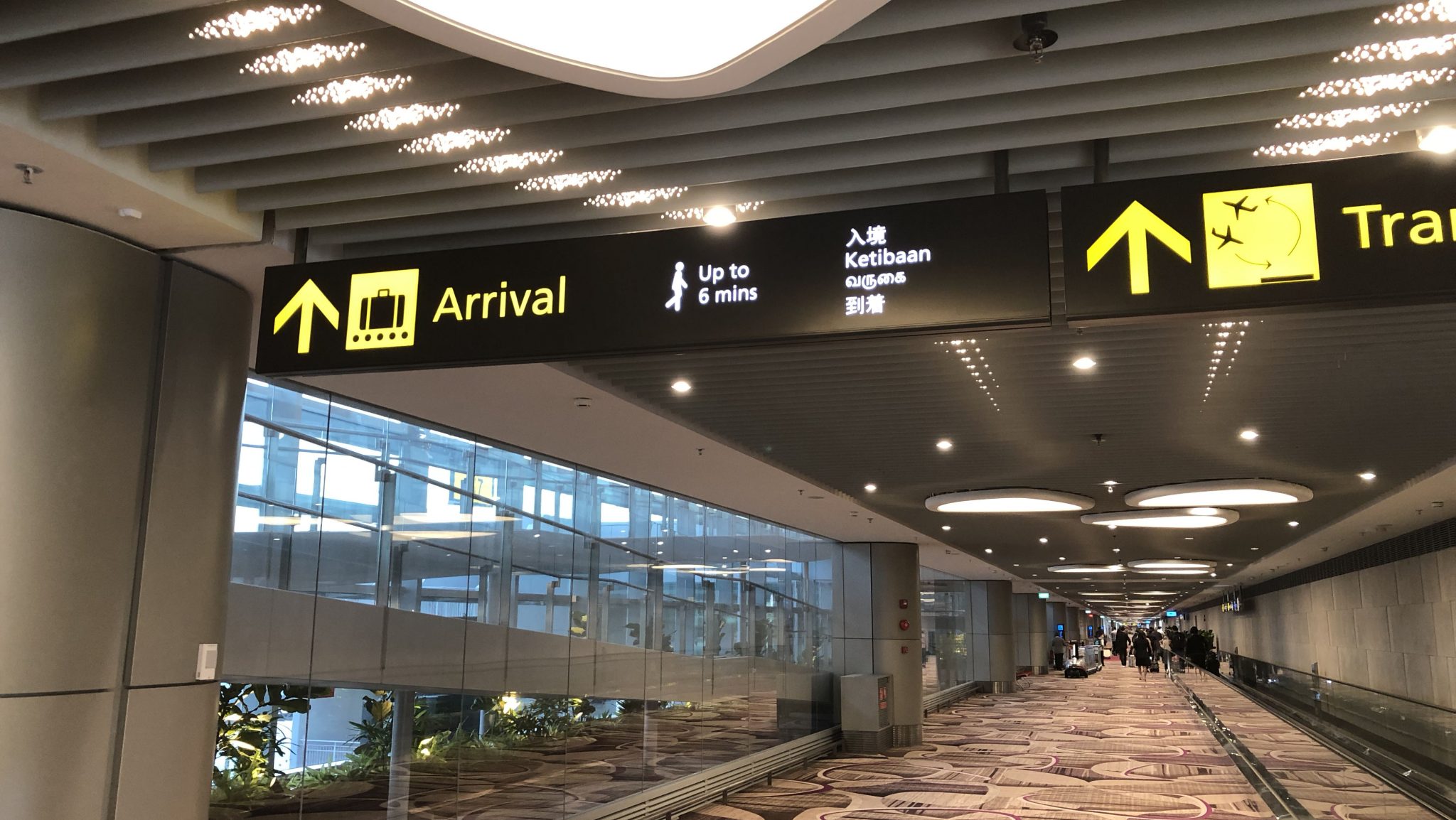 We had landed at the 2017-opened Terminal 4, the newest terminal at the airport. 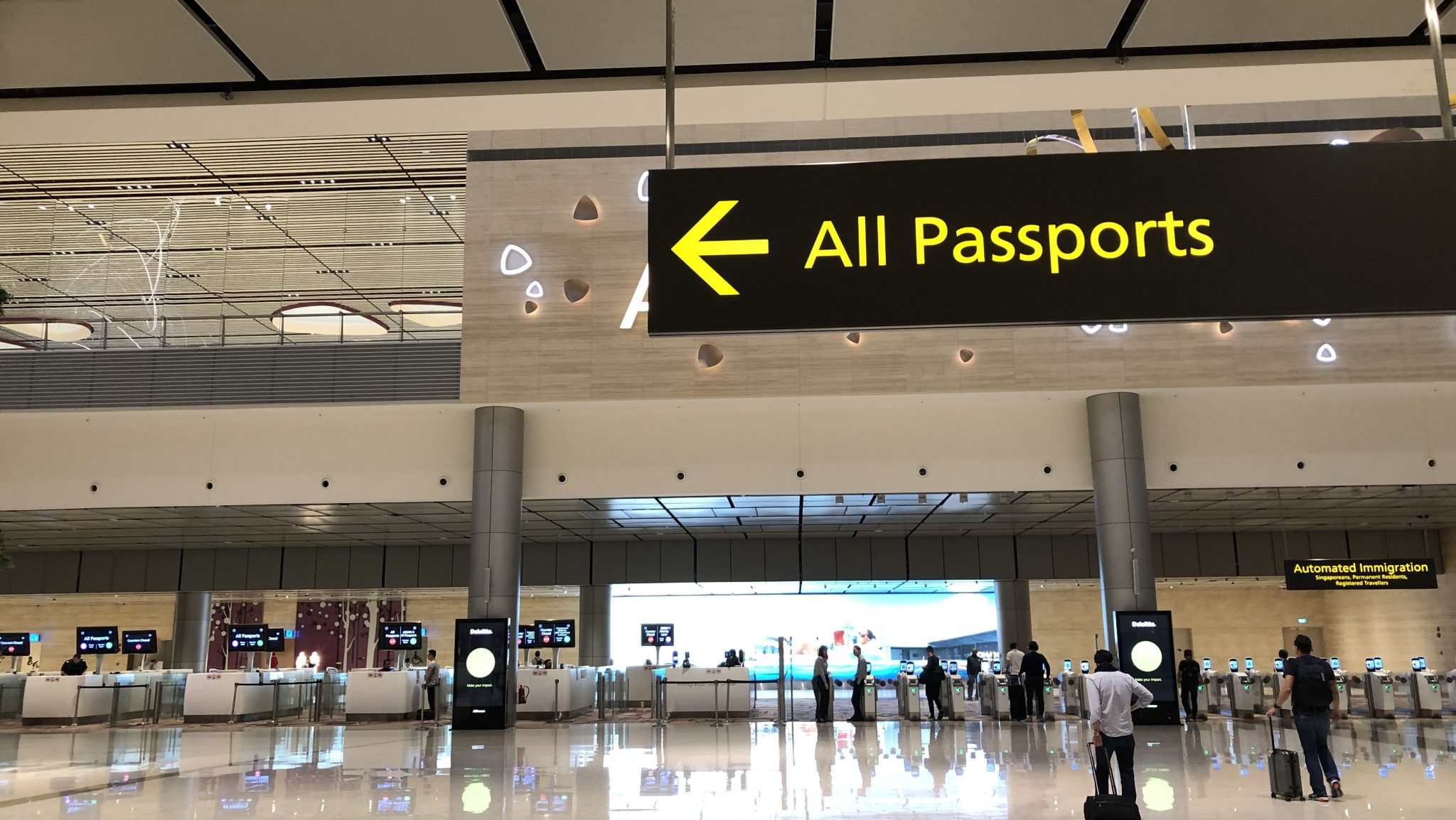 A smooth and comfortable flight. The additional leg room and private space afforded by the premium economy seat really makes this flight effortless.

However, since it’s a fairly short route (three to three-and-a-half hours), you will certainly want to weigh up the cost-benefit of paying more, when enduring economy class for such a short time wouldn’t exactly be difficult for most people. If the price difference between economy and premium economy class isn’t too vast, though, you probably won’t regret splurging a little for the additional comfort. 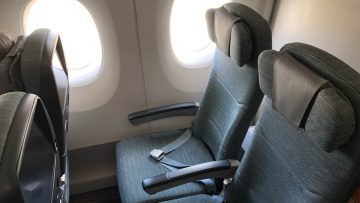 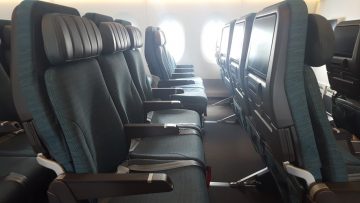 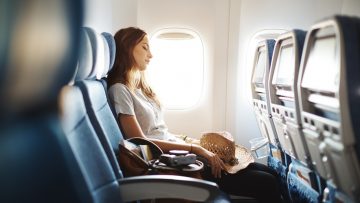