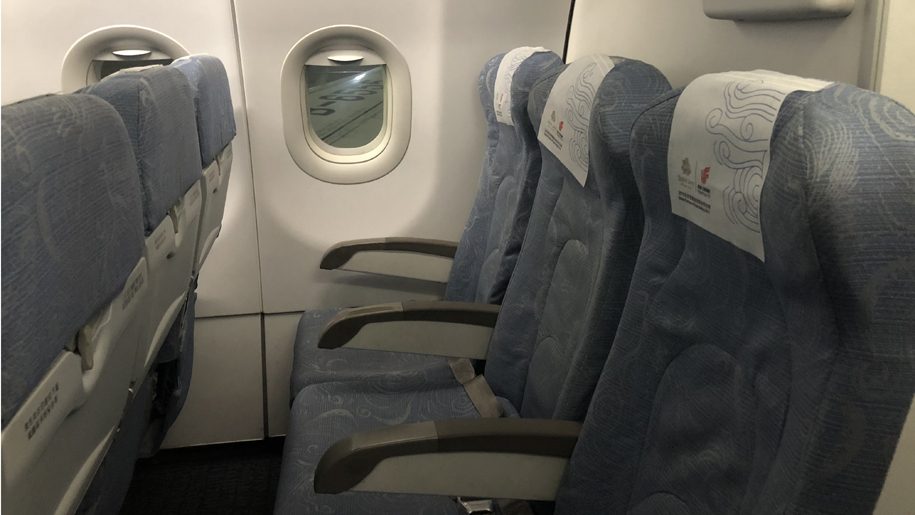 China’s flag carrier Air China operates six daily flights between Hong Kong and its primary hub, Beijing Capital International Airport (PEK). For this review, I was travelling from Beijing to Hong Kong on its CA107 service.

Passengers leaving from downtown can take Beijing Subway’s Airport Express to reach the airport by going via Dongzhimen Station (Line 2 and Line 13) and Sanyuanqiao Station (Line 10). The train will arrive at Terminal 3 first followed by Terminal 2. It normally takes around 25 minutes from Dongzhimen to T3, and another five minutes to T2. The single journey fare is RMB25 (US$3.73).

Flights from Beijing to Hong Kong depart from T3. I arrived at the airport at around 1625 after calling for an express car on the popular Chinese ride-hailing app Didi. The economy class check-in counter for this flight is in Row H and I arrived at the counters at approximately 1630, an hour and 45 minutes before my flight’s scheduled departure time. Despite there being nine counters open, the queue for check-in was very long and didn’t seem to move particularly fast. 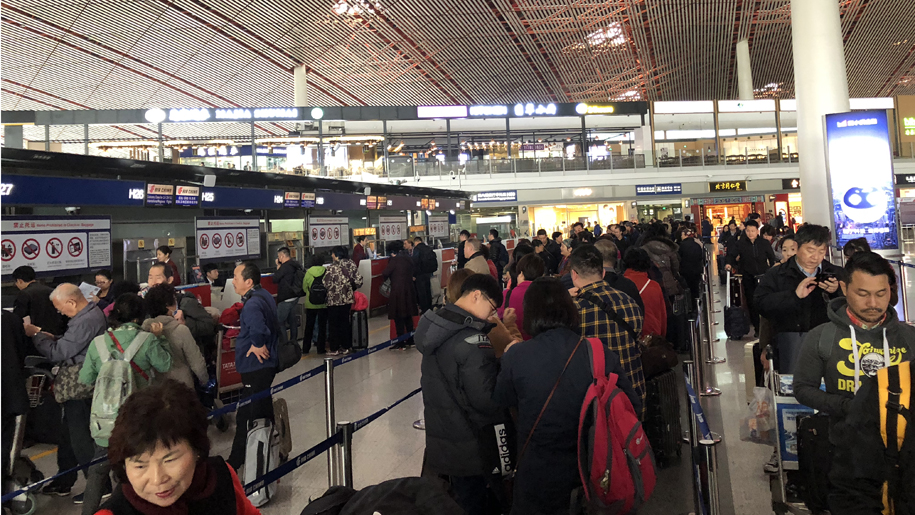 Fortunately, after I’d been waiting for just over 10 minutes, a member of staff arrived and asked if anyone in the queue was taking the CA107 flight to Hong Kong. Along with myself there were several other passengers still waiting to check-in for this flight and so a new counter was opened for us on the opposite side of the aisle. At that point, check-in was easy and quick.

There are three different zones in T3: T3-C, T3-D and T3-E. Both T3-C and T3-D are used for domestic flights, while T3-E is for international flights. Hong Kong along with Macau and Taipei are considered international rather than domestic destinations, so I had to go to T3-E. This requires scanning your boarding pass at an automated gate before you are able to take the APM (automated people mover) train to get to T3-E. 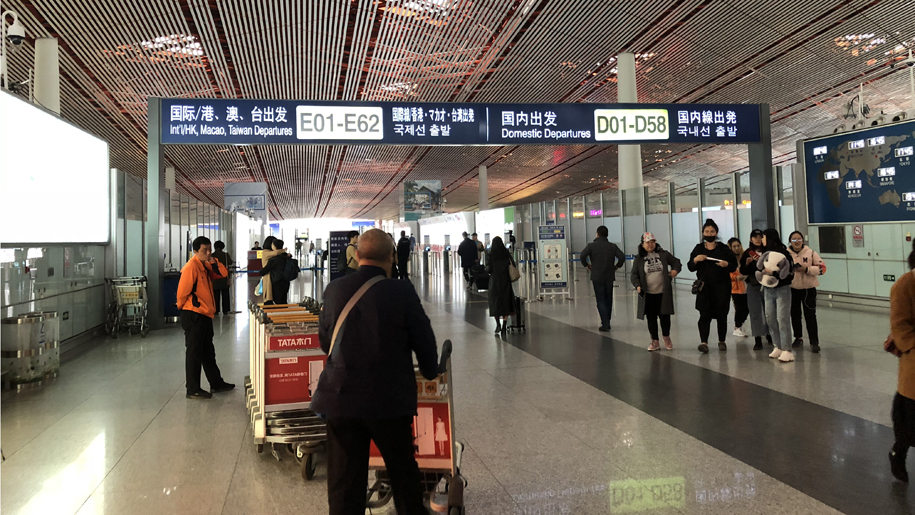 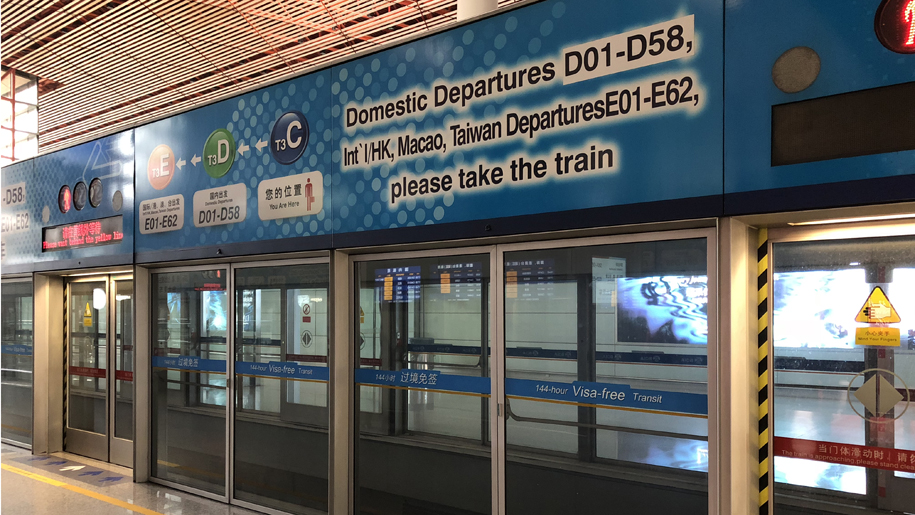 It took just four minutes for me to arrive at T3-E, with a stopover at T3-D. Immigration was swift thanks to the automated e-channel that is open for Chinese nationals (such as myself) travelling to Hong Kong. However, the later security check was incredibly slow and took me more than 20 minutes despite there being only 10 people in front of me in the queue (there were only a couple of lanes open).

I later found out that the airport had published a notice on its official Weibo account on February 27 informing passengers that stricter security measures would be implemented, and that travellers are encouraged to reserve enough time for all the procedures and not to bring too much hand baggage with them. Most likely this was a result of the annual plenary sessions of the National People’s Congress and the National Committee of the Chinese People’s Political Consultative Conference, which is held annually in Beijing in around March. 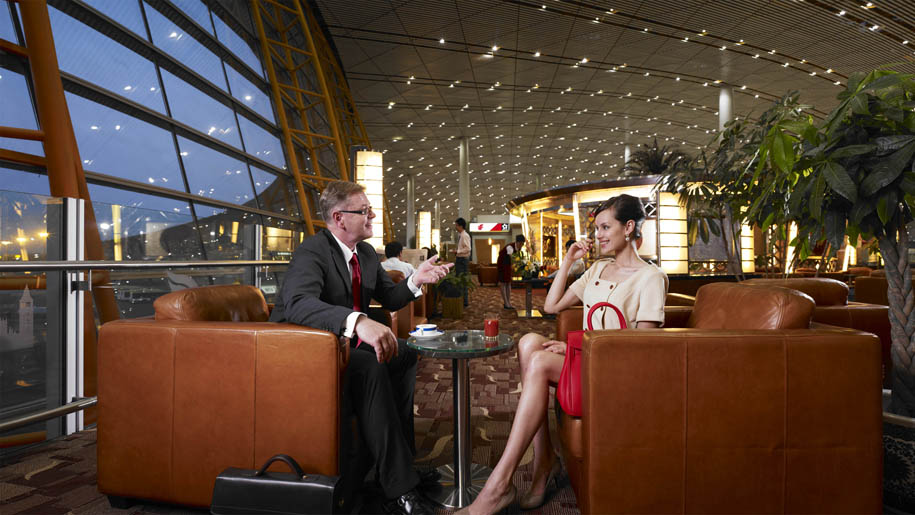 After the security check, I made a right turn and it was only a one-minute walk to Gate E19. Next to the gate, there is a 50-sqm exhibition space named “Impression of the Palace Museum” that’s open from 0830 to 1830, where passengers can watch short videos about the Palace Museum on a big screen or appreciate some of the exhibits on the smaller interactive screens while they wait to board. 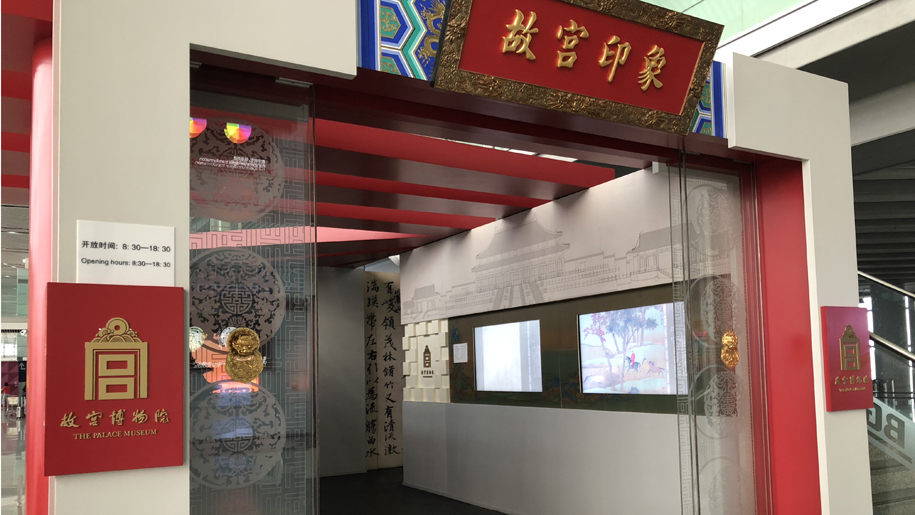 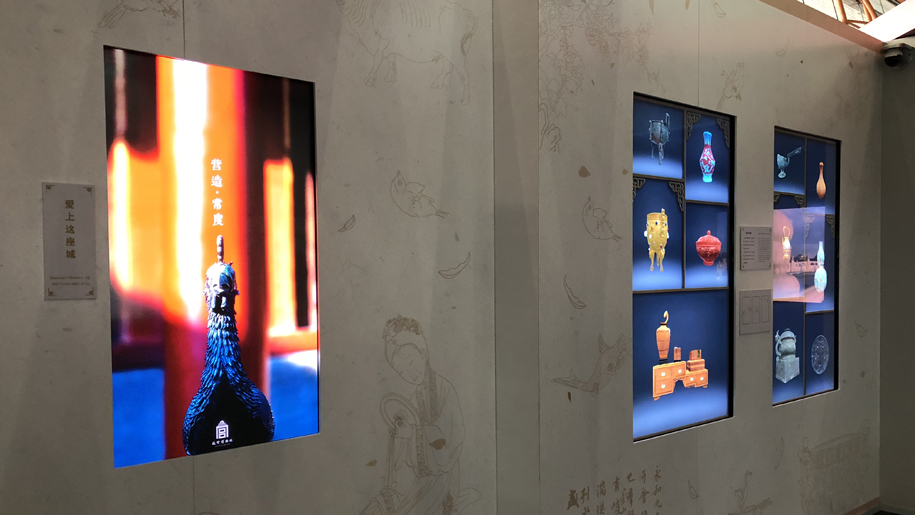 CA107 was scheduled to take off at 1815, and boarding began punctually at 1735. Surprisingly, there wasn’t a queue for boarding when I arrived at the gate after the boarding announcement, so I was one of the first passengers to board the aircraft. 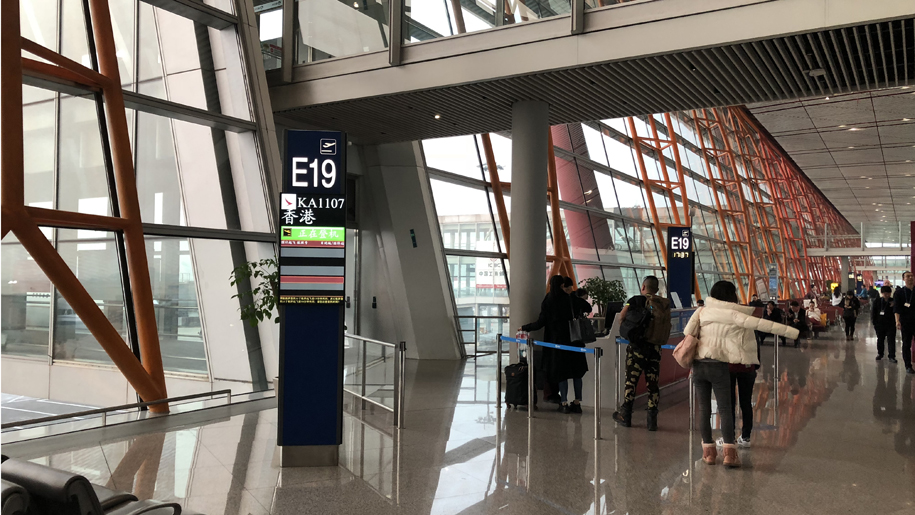 The flight was operated by a two-class Airbus A321 aircraft with 16 business class seats and 161 economy class seats, the latter cabin laid out in a 3-3 configuration. As is common on shorter flights operated by Chinese carriers, economy seats are without an in-flight entertainment system, so you’ll want to bring some entertainment of your own along.

My seat was 24J, an aisle seat on the last row in the first economy cabin. The lavatory was just behind me, but it didn’t turn out to be that bothersome. The major drawback was the limited recline, though the other two seats next to me were not occupied during the flight, so I had a bit of additional space beside me. 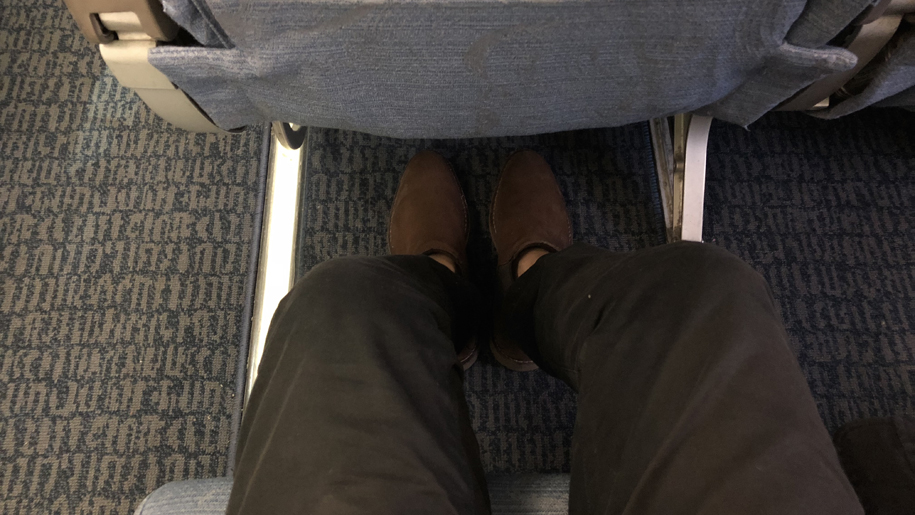 In the first economy cabin, the best seats can be found on Row 14 (ABC/JKL), which is an emergency exit row with more legroom and space.

Meanwhile, seats 26A and 26L on the second row of the second economy cabin also enjoy more legroom due to there not being a seat in front of them. The Row 25 in front is another emergency exit row, but its proximity to the toilet may be annoying for some.

The flight began to taxi soon after the aircraft door was closed, and it finally took off at 1828, a little later than the scheduled 1815 departure time.

The temperature in the aircraft was a bit low at the beginning, and some of the passengers – myself included – asked for a blanket. A member of the cabin crew said they needed to check if there were any left, but one minute later she came back and brought me a red one, which was thin but enough to keep me warm.

Dinner service began at about 1920. Before that, the first round of drinks was served. I chose tea and was glad that it was served hot. There were two meal options for dinner: chicken noodles with mushroom, or fish with rice. After all the delicious but fattening food I’d had in Beijing, I went for the slightly healthier choice of fish.

The fish came with carrots and celery. There was also a cold starter of salad with dressing, a piece of bread with butter, a chocolate wafer bar and yoghurt. A second round of drinks was served during the meal. The food was pretty average to be honest, and the best thing about it was the Nestle chocolate wafer. 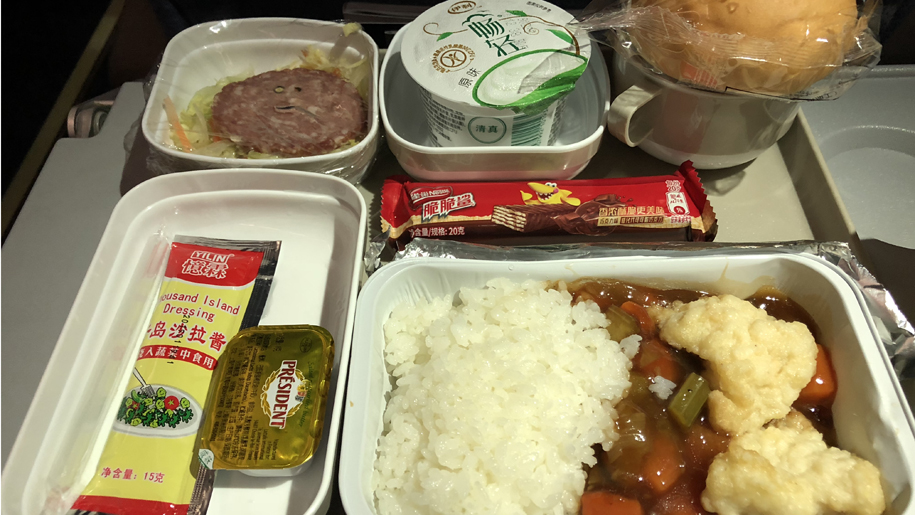 The flight was smooth without much turbulence, and we landed in Hong Kong at 2130, more than half an hour earlier than scheduled. However, the plane was parked far away from the terminal, and we had to wait for some time on the plane before taking a shuttle bus back to the terminal for immigration and baggage claim.

I arrived at the terminal before 2200, and then passed the immigration and got my suitcase immediately without having to wait, meaning I was able to leave the airport at 2205, exactly the scheduled landing time.

Since there are several daily flights operated by Air China from Beijing to Hong Kong, this evening flight was not fully booked and there were many vacant seats, which was pleasant as it meant I could enjoy some additional personal space. Members of staff were kind, though there’s room for improvement in amenity stockage and meals.