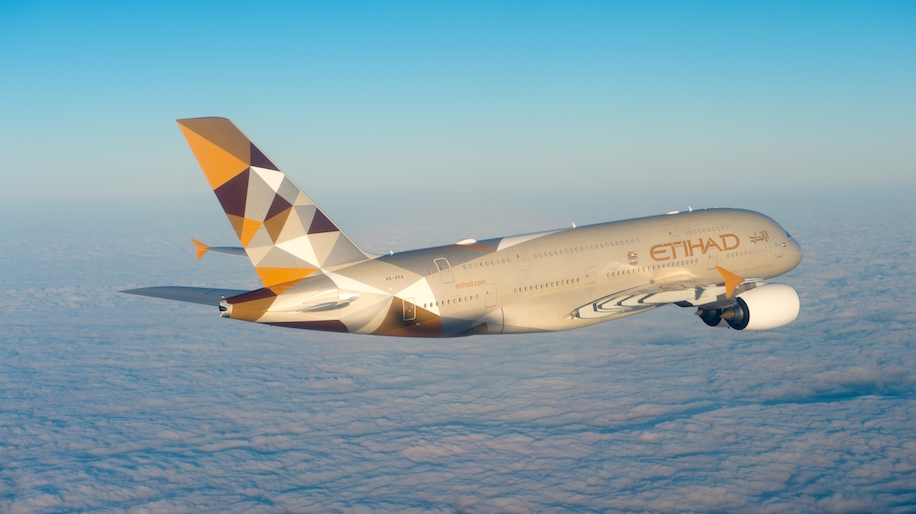 I arrived at Heathrow terminal 4 at 1300 for a 1500 departure. I hadn’t checked in online, but there was no queue at the Business Class aisle and I checked my case in immediately. I went straight through the Fast Track aisle at security, and headed to the Etihad First and Business Class Lounge, opposite gate 10.

The lounge is quite small, but there are a range of secluded seating areas, plus a sleek dining space. I was offered a glass of champagne as soon as I was seated, and the choice of an à la carte meal or a cold buffet, which had mezze dishes as well as hot food. I needed to charge my phone but the few plug sockets in the restaurant were already in use, so the staff offered to charge it behind the bar while I ate. The lounge area has a few more sockets. At the lounge’s Six Senses spa, business class guests can purchase a 15-20 minute treatment, and first class guests are offered one for free. 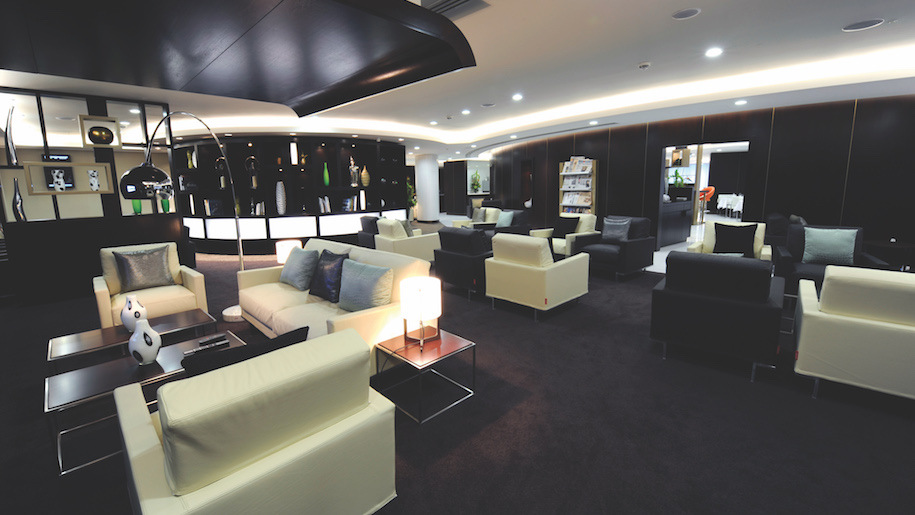 At 1430, a member of staff informed me that boarding had begun. The gate was a short walk from the lounge, where there were priority aisles for business and first class passengers. There was no queue and I was in my seat by 1440. A few minutes later I was offered a hot towel and a choice of water, carrot juice or Jacquart champagne.

Business class has 70 flat bed seats configured in a 2-4-2 layout, each with its own “privacy shell”, containing a 6ft 1-inch fully-flat bed with aisle access from every seat. Each has a 15-inch IFE touch screen, a separate touch screen IFE controller, two USB ports and noise-reducing headsets.

Etihad has partnered with Luxe City Guides for its amenity kits, offering limited edition pouches containing Scaramouche and Fandango products and city guides for Abu Dhabi, London, Madrid, Los Angeles, Sydney and Hong Kong. The kits onboard are distributed randomly and I received a Hong Kong guide, which was a little useless given we were flying to Abu Dhabi. A heavy blanket, pillow and bottles of water are provided, and there is a roomy storage compartment within the shell containing a few magazines and space for a handbag or small laptop. I was sat in 19c, facing backward and by the window, which was considerably more private than the middle seats. 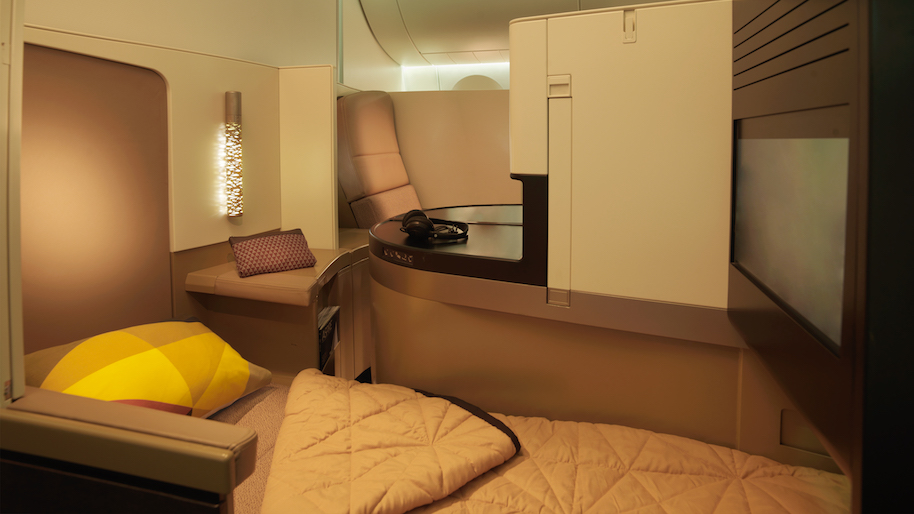 Seats A, C, H and K are by the window, though A and K don’t have the body of the seat’s “shell” in the way, so you can peer out of the window if that’s what you want to do. C and H are backwards facing, along with middle pairs D and G. Seats E and F are good if you’re travelling with a companion. I was next to the galley, but didn’t notice any noise or commotion, but the lounge, which has a circular seating area where drinks and snacks are served, is near seats 8-10, so you might want to avoid these if you don’t want to be in earshot. If you’d rather be near the washrooms, seats 18, 19, 24 and 25 are a good choice. 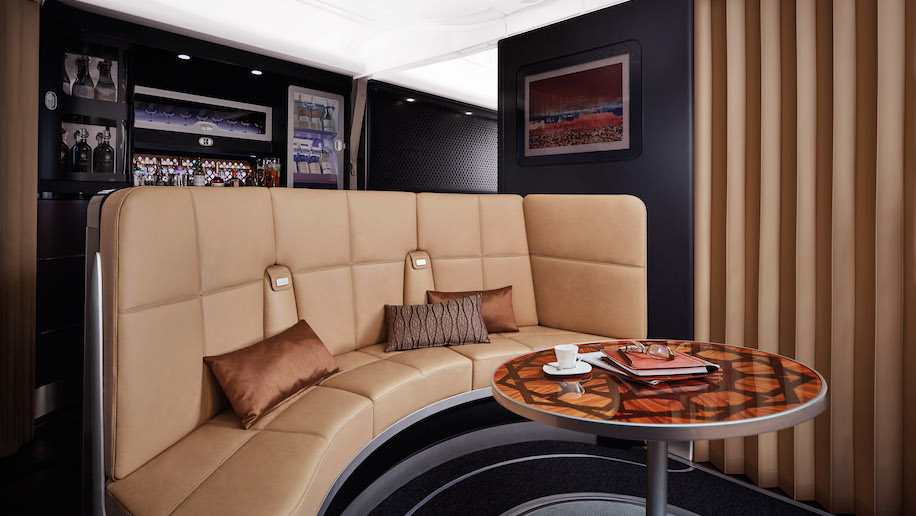 At 1450, an attendant introduced herself to me and offered to explain the seat’s recline and lighting modifications, which are controlled by a separate touch screen next to the IFE controller. The window shade is also controlled this way. There are seat pre-sets for take-off, dining, sleeping and the standard upright position as well as a “cushion firmness” setting, which lets you to inflate or deflate the seat underneath you, and around the lower back. While this was comfortable when sat upright, it was annoying when lying flat as the cushion never quite deflated all the way.

I was also offered a menu, and recommendations of which meals taste best at altitude. I was also asked when I would like to be served dinner. As I’d just eaten, I asked to have it three hours after take-off.

We took off late at 1545, with no reason given for the delay. Before dinner, I was given a bowl of nuts and offered a drink. There was a choice of three white wines; a 2014 Chardonnay (Joseph Drouhin Mâcon-Bussières ‘Les Clos’ from Burgundy), a 2015 New Zealand Sauvignon Blanc (De Brancott Estate from Marlborough) and a 2013 Austrian Gruner Veltliner. There were also three red wines, a 2011 Merlot (Les Charmes de Grand Corbin from Bordeaux), a 2014 Australian Shiraz (St Halletts “The Faith” from the Barossa Valley) and a 2015 Australian Pinot Noir (De Bortoli “Yarra Village”, from the Yarra Valley). Champagne was also on offer – a Duval Leroy Brut Réserve plus a 2014 South African dessert wine (Nederburg “The Winemaster”). There was also Absolut vodka, Martini, Campari, Glenlivet, Bombay Sapphire, Hennessy VSOP and Graham’s 10 year old Tawny Port.

There were three starters: an Arabic mezze; smoked duck with pickled king oyster mushrooms, baby beetroot and garlic oil; and a celeriac and apple soup with creme fraiche, which I chose – it was delicious and light. 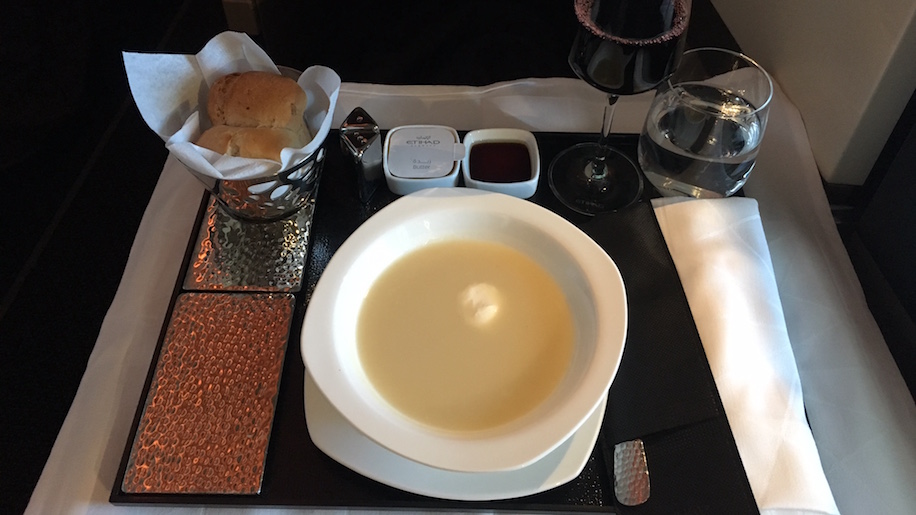 Main courses included a sirloin steak with sautéed purple potatoes, fine beans and jus; grilled salmon with sun dried tomato polenta, baby courgettes with sautéed spinach and velouté; baked pumpkin with spinach, quinoa, pumpkin seed oil and goats’ cheese and the Gulf chicken biryani, which was excellent. There was also an “All Day” menu, which offered a steak sandwich with red onion chutney and Emmenthal, grilled poussin with quinoa, kale and red amaranth, fresh fruit and ice cream plus a selection of cookies, Swedish crisp breads, Arabic baklava and crisps. 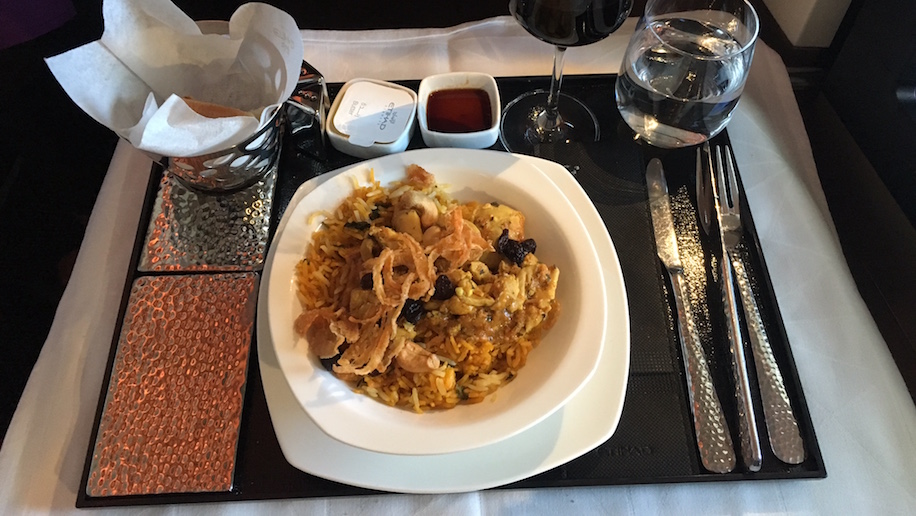 The selection of films and TV programmes was not great, but the music collection was, (more than 400 albums) and there’s the option to create your own playlist, which I did. Onboard wifi costs $11.95 for two hours and $17.95 for four hours. There are also live news stations (BBC, CNN, Sky News) and an elibrary, which features Etihad’s inflight magazines. The crew were extremely friendly, regularly checking that I had enough water and drinks throughout the flight.

We started our descent at 0040 local time (there is a three hour time difference with London), at which point the opaque window blinds opened automatically. We landed at 0115, on time despite the delay, and arrived at our stand ten minutes later. We had been handed Fast Track cards while on board, which were supposed to help our transit through security and passport control, though there was no one else around that time of night so they proved a bit redundant. At baggage reclaim, it took 20 minutes for my bag to arrive and I was out of the airport by 0210.

A great service – I was impressed by how attentive the staff were, and it was nice to be able to choose when the meal was served. The food and drink was also superb.

PRICE Internet rates for a return business class flight in November start from £2,014.