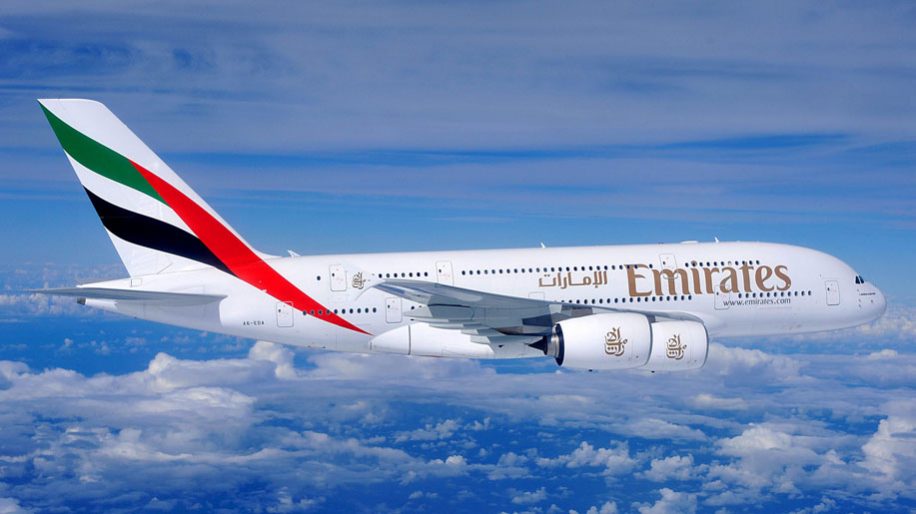 I was taking flight EK001 to London Heathrow at 0745. I was connecting from Brisbane (for a review of the previous leg click here), so had already checked in and through-checked my luggage. I disembarked at Dubai International’s Terminal 3 at 0455, went through security – short queues and no need to take out my laptop – and headed for the lounge. This is located immediately on the left after security, up a level via lift – don’t do as I did and follow the sign to the right for VIP lounges or you will end up walking for ages. I was in the lounge at 0515.

Emirates’ business class facility is a huge venue overlooking the main departure lounge. It has a wide range of seating areas with power towers for charging your gadgets, a good selection of hot and cold food, soft and alcoholic drinks, a spa, smoking zone, prayer room, showers, departure screens, flatscreen TVs and free wifi – after trying to connect for 15 minutes I gave in and grabbed a PC in the business centre (other people didn’t seem to be having problems so it may have been my Macbook). Flights are not called. It was busy on this Friday morning.

I had been directed by lounge staff to be at Gate 230 by 0715. At 0705 I took the short walk there. It was already boarding and I went through immediately, taking the lift up to level 2 for A380 first and business passengers. A small queue had built up on the airbridge. I was in my seat by 0720.

First and business class on Emirates’ A380 are located on the upper deck – turn left for first and right for business. There are 76 business seats across two cabins, in an alternating 1-2-1 layout that gives everyone direct aisle access. Window seats are A and K, aisle seats are B, D, G and J, and middle seats are E and F. Rows are numbered six to 21 – there is no row 13 – and then 22 to 26. Six and eight have aisle seats, seven and nine have window/middle seats, and so on. (For a seat plan, click here.) I was in window seat 9A. Behind row 26 is a lounge with a manned semi-circular bar, curving sofas on either side, a flatscreen TV, standing room and snacks such as nuts, tortilla chips and cocktail sandwiches.

As you would expect, Emirates’ A380 seat is its most advanced and luxurious, in a fixed shell design with a seat surround to the right or left housing a range of features. The seat is upholstered in light grey leather with a brown and blue patterned fabric down the middle, and dark grey leather armrests. It meets with a footstool in front (built into the surround of the seat ahead) to recline to a fully-flat bed. Above that is a magazine rack, a 10-inch touchscreen in-flight entertainment (IFE) screen, an IFE control, in-seat power and two USB ports. A table folds out of the seat surround. The surround itself has a tabletop big enough to place your laptop on while you are eating, or your food tray if you have finished eating and want to get on with work. There is also a removable panel that you can use to control the IFE, the seat and the privacy screen.

There are three presets for the seat – upright, lounge and bed – and you can adjust the headrest, footrest and lumbar support. You can also save your preferred setting. There is a range of massage functions too. The seat surround also has a minibar with still and sparkling water, tomato juice, coke and lemonade, a couple of small storage spaces (one had a pack with socks and an eye mask in – this being a day flight, no amenity kit was provided), more buttons to adjust the seat, and a reading light. In addition, window seats have large storage bins along the wall. A mattress and blanket were in one of these. A pillow and noise-cancelling earphones are also provided.

As has been noted in a previous review (click here for more information), aisle seats have several inches less room than window seats – a pitch of 39 inches compared with 48 inches, and a bed length of 70 inches as opposed to 79 inches – so choose accordingly. Window seats also feel more tucked away, and have more storage space. Choose the two middle seats (E and F) if you are travelling with someone else so you can talk to one another – if you are on your own, be aware that they afford a bit less privacy, as there is no seat surround between them, though they have a large privacy screen to separate them. Consider that you are more likely to be disturbed towards the back of the second cabin by the bar and washrooms behind, or the front row of the first cabin by the galley ahead.

On taking my seat, I was welcomed by name, offered champagne or juice, given a menu and wine list, and a hot towel. I was asked if I would like to order a drink for after take-off. The audio-video on-demand IFE system was already on, so I watched the end of a film I had been watching on the previous leg before take-off. The system, called ICE, is excellent, with about 300 films, more than 150 hours of TV, hundreds of audio channels and more than 100 games.

There was a delay in departing – we pushed back at 0805 and took off at 0830, 45 minutes behind schedule. Drinks were served after half an hour, followed by breakfast – this was fresh fruit, yogurt, a warm croissant and roll, jam and marmalade, tea, coffee and juice. I then got on with some work. The table bounced a little when I used my laptop. Staff were very friendly and helpful, offering me more drinks, asking me if I’d like the mattress set up on my seat and, when I realised my Blackberry’s battery was dead, finding me a charger.

We made up some time, landing into Heathrow Terminal 3 at 1230, 15 minutes behind schedule, and were off the plane quickly. There was a short queue at the fast-track security lane and my priority-tagged bag was out quickly. I was airside at 1255.

PRICE Internet rates for a return business class flight from London to Brisbane via Dubai in October started from £2,939.