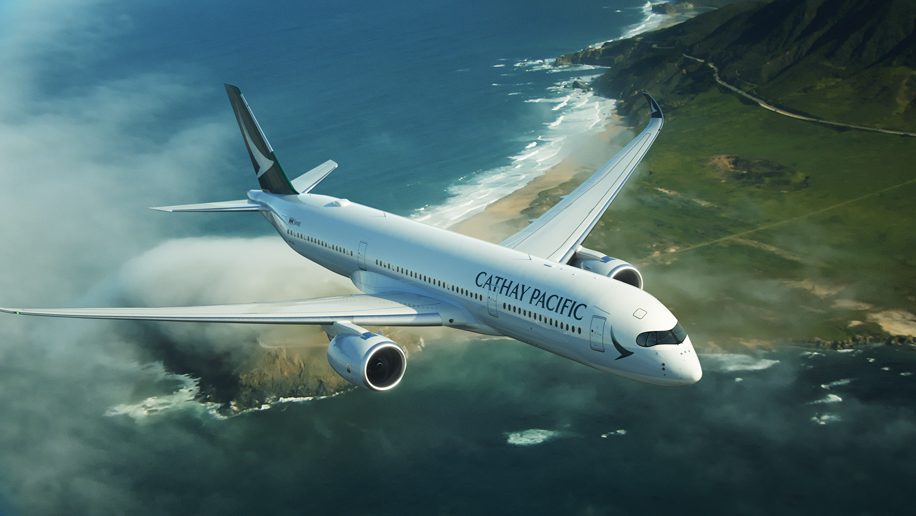 This is a review of Cathay Pacific’s Airbus A350-900, with 280 seats configured in three classes: 214 economy seats, 28 premium economy and 38 business. It is a new aircraft, and in addition is a return to Gatwick for Cathay after a gap of nearly 20 years. The four-times weekly service started in September 2016. Flight times can be found on the news piece

And there’s a video walk through here

I had taken the second flight from London Gatwick. The review of that flight is here

I arrived at Hong Kong International at 2100 for my 0055 departure on CX343 to London Gatwick. I had already checked in at the city check-in at Central in Hong Kong and dropped my luggage. This meant I could bypass the Cathay check-in which is in zones B and C and go straight through security. Once there, I then went to the lounge.

Cathay has a wide choice of lounges at its hub airport including The Bridge, The Wing, The Cabin and The Pier.

As a passenger in business class with Cathay you have the choice of all of them, though note that if you choose the Pier this is in fact two lounges, completely separate (from a passenger point of view) and with two separate entrances, with First Class being the first you come to with an escalator going down to it located between gates 63 and 65 and then a little further on the business class lounge (also called The Pier).

I had arrived early so I could visit some of the lounges that I had either not seen before, or hadn’t seen in a while, so I have written separate reviews of these, the links to which will appear below

While in the lounge I had been told that my seat had been swapped because there was a problem with the IFE screen. My new seat was 14D.

When I arrived at the gate boarding had already commenced, though there were separate queues for economy and premium passengers. Once on board, I was greeted and started working while other passengers joined the flight. I believe other passengers were offered a welcome drink (they all had one) but I may have missed this because of working or using the washroom. In any case, I did not want one having visited four lounges in the previous three hours.

This flight review follows on from this one

Flight review: Cathay Pacific A350-900 Business Class and rather than repeating everything that was in that one, I have tried to build on that, so if I miss anything out in this review, I hope it is because it was already covered in that review. If not, please let me know.

This is a new business class seat for the A350, and you can see a lot of photos of it on our Flickr page Cathay Pacific A350-900 at the end of this article (unless you are on an iPad, in which case click that link to see the photos).

There are two cabins – a larger front cabin of 30 seats in a 1-2-1 configuration and a rear smaller one of 1-2-1 with just eight seats. There is a seat map on Cathay’s website: Cathay Pacific A350-900 seat map.

These are new seats in all classes, with the premium economy and business seats designed by Studio F.A. Porsche. The seat will be immediately recognisable to those used to flying Cathay’s business class – it is 1-2-1 in configuration, forward-facing but at an angle, with surrounds giving a fair degree of privacy without completely cutting you off from other seats (important for the centre seats where couples may be flying. The cabin seems spacious which is impressive when there are overhead lockers above the central seats, which wasn’t the case with the Qatar Airways A350, Ethiopian or Finnair. I took photos on those flights so have a look

The seat has a foot-well/ ottoman close to your fellow passenger, so for amusement’s sake (and I did not encourage his feet for the following performance) here is my view, of his feet /socks as he waited for take-off.

On the previous flight I’d not been impressed with the tray table. This one, though, was better – still small but at least the table was more robust and did not slope as had my previous ones – perhaps it’s just luck which you get. You can just about place your laptop to one side when dining.

In the last review I spoke about how there were several broken seats. I’m afraid that was still the case on this flight – though they were different seats. I saw one flight attendant struggling to help passengers in 12D and 12K and coming away with an identical, large bit of the seat surround in their hands.

Cathay has, I think, five A350s already, however, so none of this may be a problem on the one you fly on, but I think Cathay will be handing out a lot of Marco Polo Miles to people whose IFE isn’t working or whose seats are broken in coming months.

While waiting for take-off I navigated around the Inflight Entertainment and found the camera function, and as I waited for the doors to close and for us to begin the process of taking off I shut my eyes.  It was around 0045 by this time. When I opened my eyes chocolates were being offered for the end of the meal service. Ninety minutes had passed. I could have gone back to sleep, but it’s a long flight and I wanted to try the food. I asked if I could have a meal, and there was no problem. Full marks for flexibility, since most people who had dined had already finished their meals.

The meals were offered in association with the Hong Kong restaurant Mott 32.

These are described as “ingredient-focussed”, and though it’s hard to think of food that isn’t, they were very tasty.

For supper I had

(The Grilled Australian prime beef tenderloin had all been finished).

The wine list was exactly the same as the previous flight on the A350 a few days earlier. I won’t write it all out again – but it can be read there

After that I decided to go to sleep properly.

Note that the problems with the washrooms remained – namely that when you close and lock the door the sensor doesn’t detect it, meaning the washroom shows as green light unoccupied in the main cabin, which means everyone tries the door while you are in there, and meanwhile you are in near-darkness because the light hasn’t come on fully. It’s not so bad when you are prepared for it, but it needs fixing.

From talking with the flight attendants I know they had their own challenges with a coffee machine not working in the galley and other issues but these are all teething problems which will be fixed. The service was excellent throughout the flight, especially considering I think they were all quite new to the aircraft.

One point is that the A350-900 is very quiet, and from row 14 I could quite clearly hear the flight attendants chattering away in the galley, which probably would not have been audible on the B777-300ER or other aircraft. You can also hear fellow passengers snoring (though not yourself) or people talking to flight attendants from several rows away. There are noise-cancelling headphones, so most people either put ear plugs in and sleep or watch films.

Other disturbances (in terms of light) come from the large IFE screens, which are very bright. If your neighbour leaves their screen on but pushes it back into take off position it shines right at you, but if you wear an eye mask it’s problem solved.

I slept extremely well. The bed is very comfortable and with the extra areas around the sides (described in the previous review) means it’s extremely comfortable to move around and sleep on your side, according to personal preference.

I woke about 0400 UK time, with just over two hours of the flight remaining. I brushed my teeth, and then did some work, connecting to the Wifi once again I had connected using my phone before sleeping and caught up on emails, now I used my laptop. (Multiple devices can be used with a Wi-Fi pass, but only one device can be connected at a time.

In case you were wondering, you can’t buy the one hour and then keep pausing it.

The Panasonic IFE system and connectivity is excellent. Cathay says that the service is available from gate to gate from departure to arrival, which is true in the sense that you can view the portal, but you can only surf websites and get your emails once above 10,000 feet. The IFE system also has three live channels which worked well. (BBC, CNN and Euronews). Note that for flights of six hours or less the price is US$12.95 for flights of six hours and less. You can find more here.

Around 90 minutes before arrival breakfast was served which was a choice of.

I had the assorted dim sum which was delicious and very filling, particularly the chicken glutinous rice.

We landed without delay at 0620. I used my phone to record this (see below.

Once we had landed we had a long taxi to the gate and were disembarked by 0635. Immigration was empty and our bags appeared quickly on the carousel.

Cathay has no arrivals lounge or facility here at London Gatwick, though they told me they would look at it if there is a demand.

From there I took a train from the Gatwick South Train Station into Central London.

Very good – the staff were excellent, the seat perfect for sleeping and working, and of course the A350 leaves you feeling fresher because of the reduced noise and lower altitude on board.

Once again the seats seem to be far from robust, though (and there are a few teething problems with the inflight entertainment). I’m sure these will soon be fixed. 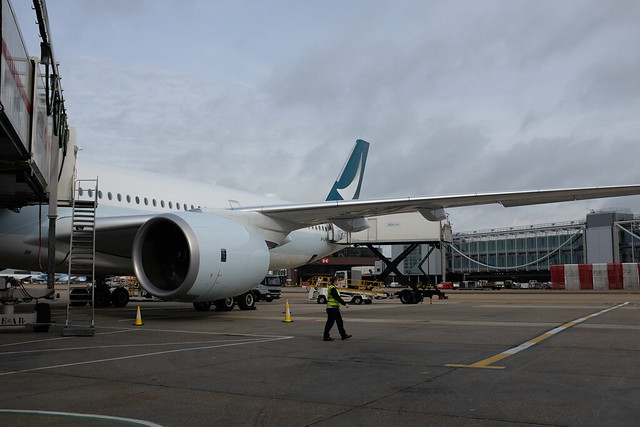 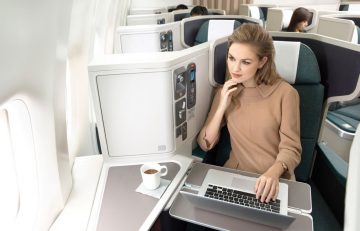