CHECK-IN I checked in online within 24 hours of my flight, meaning seat selection was free. I changed my seat from one by an aisle on the lower deck of the B747 to the last available window seat on the upper deck, and then downloaded my boarding pass through my iPhone app. My flight to London was departing from Dubai airport’s Terminal 1 at 0155 so I arrived at 1210 and entered check-in Zone D where the BA desks are. There were two open for Club World passengers and no one ahead of me so I promptly had my case checked in and a paper boarding pass issued.

I then walked a couple of minutes around the corner towards security – en route, boarding passes were checked and then passports stamped at immigration, where there was a five-minute delay. Security was very quick – I was going to take out my laptop but the guard said not to worry and ushered me through. I then took an escalator downstairs, following the signs along several moving walkways to “All gates”. This then brought me to the impressive Dubai Duty-Free area. I turned right and took an escalator upstairs. Walking towards Gate C22, I made my way to the dedicated BA lounge, which is just a couple of minutes further than the Emirates business class lounge on the right-hand side just before Gate 26.

THE LOUNGE The BA facility is on the small side and it’s not the most luxurious facility, especially compared with the lounges in Heathrow T5, feeling a bit cramped and with rather harsh lighting. It was also very busy but I did manage to find a seat. Expansive convex windows look out on to the aircraft stands at Gate B12, there are a couple of workstations with PCs and a trickling water feature in the middle. Flights are called as there are no departure screens, and the décor was neutral greys and browns.

In terms of food and drinks, there were Arabic mini pittas stuffed with salad and cheese, mini French finger rolls, a large bowl of crisps, cakes, and a hot station with chickpea biryani, chilli, chicken Thai red curry, samosas, soup and rice. A self-service bar offered soft drinks, beer, wine, a modest selection of spirits, tea and coffee. Wifi wasavailable with a cods and magazine/newspaper racks sported titles such as The Economist, High Life, Outdoor UAE and Revolution.

BOARDING There was an announcement to leave the lounge at 0110. It took just under ten minutes to walk to Gate C11, also on the mezzanine level, and there was a separate queue for First and Club World passengers where documents were checked. There was also an additional security check. There were about five people ahead of me so it took a few minutes – laptops were supposed to come out but there weren’t any trays available so, again, I was told not to worry. (When I got on the plane I also realised I had a large bottle of water in one of my bags, which I had forgotten about, but hadn’t been detected.)

Boarding started at the same time as I was through at 0130, with families with children called first, followed by first and business class passengers. Boarding was via an airbridge and I was directed to turn right and then go upstairs to the Club World section (rows 60-64) on the upper deck, which has a nice private, exclusive feel to it. There are also two Club sections downstairs on this High J B747 (rows 12-14, and then 17-20).

THE SEAT I was in seat 61A, which had a view out of four windows. There was a pillow, plastic-wrapped cotton coverlet and noise-cancelling headphones on the seat. An amenity kit (containing an eye mask, socks, toothbrush and paste, Elemis moisturiser, lip balm, facial wipe, ear plugs and eye gel), menu, winelist and drinks (water, orange juice or Taittinger Brut Reserve NV champagne) were handed out as passengers settled down. Window seats have extra storage bins next to them – I had four available to me. Aisle seats don’t get much storage space except in shoe drawer and overhead bins.

Club World is arranged 2-4-2 (A-B, D-E-F-G, J-K) on the lower deck, and 2-2 (A-B, J-K) on the upper deck, and is configured in a yin yang arrangement of fixed shell fully-flat beds. Window and middle pair seats (A, E-F, K) are all backwards facing, while aisle seats (B, D, G, J) are forward facing. A tray table foldd out from beneath the IFE screen but I found it to be a bit bouncy for typing on. The touchscreen IFE (there is also a remote in the panel by your shoulder) had a very good choice of movies and also folded out of the wall. A sliding screen lift ups and down between the seats to provide privacy and allow for food and drink to be served to the person in the window seat ore easily. There is also in-seat power by the shoe drawer.

The armrests are a bit wobbly but sink down when you recline the seat to allow for extra width. Seats are upholstered in navy fabric and recline fully flat to meet with an adjustable fold-down footrest in front. (There is no lumbar support though.) On the upper deck, the emergency exits are between row 63 and 62, and there are washrooms at the front and back.

WHICH SEAT TO CHOOSE? Avoid sitting in row 60 as it is too close to washroom – you can hear the flush and it doesn’t always smell so great. The same goes for row 64, and 17 on the lower deck. Aisle seats can feel a bit exposed, whereas window seats are very private – almost like being in your own suite. Note that if you sit here, though, you will have to climb over the legs of the person in the aisle seat behind to get out (assuming they have reclined the bed fully flat). Sitting in the back row (64, 14 or 20), however, will mean you aren’t faced with this problem. Couples should go for the backward-facing middle pairs (E-F), whereas solo travellers should opt for either forward-facing aisle seats or backward-facing window seats depending on their preference. The upper deck has a quieter, more exclusive vibe so is preferable to being downstairs, in my opinion.

THE FLIGHT Take-off was delayed an hour because of a women being ill and having to disembark the plane. As a consequence, all of her checked bags had to be taken out of the hold as well, which took some time apparently. The plane finally pushed back at 0245 and took off at 0300. There was the option of a light supper for those that wanted it but I went straight to sleep, as did most people.

For those that were hungry, there was an Arabic mezze of hummus, vine leaves, artichoke and feta cheese, as well as a selection of sandwiches filled with mature Cheddar cheese and chutney, or coronation chicken. Dessert was of hot chocolate with warm chocolate chip cookies or fresh fruit.

I got a good night’s rest thanks to the comfy fully-flat bed, waking up at 0820 to the sound of breakfast being served. I was given a tray with some fresh sliced fruit, bircher muesli (there was also the option of smoked mackerel with cream cheese), a smoothie, orange juice and a cup of tea. Crew forgot to offer me the bread and pastry selection but I didn’t want it anyway. There was also a selection of hot options that I declined: scrambled eggs with grilled beef sausage, roasted plum tomatoes and fried potatoes; American-style wholemeal pancakes with mixed berry compote and honey; feta cheese omelette with tomato mushroom ragout and roasted potatoes; and a continental breakfast featuring roasted pastrami with Gruyere and Camembert cheese.

ARRIVAL We made up some of the time we lost due to a late departure en route, and the captain announced at 0910 that we would shortly be landing at London Heathrow. About 20 minutes before landing the seatbelt signs went on and crew prepared the cabin for landing. We touched down at 1000 (0700 local time), 40 minutes late. It took 15 minutes to disembark via an airbridge, catch a transfer shuttle from B Gates and walk to passport control. There were huge queues, even for fast-track, so I used the biometric lane, which was quicker. I was through by 0725 and, after a four-minute walk, got to baggage reclaim. It took about ten minutes for my priority-tagged case to appear, despite plenty of others going around on the carousel.

THE LOUNGE Once landside, I took a set of escalators up to the mezzanine level and walked along the corridor to the BA Arrivals lounge. I immediately availed of one of the 100 shower cubicles installed there (go to the desk and a member of staff who will assign you one). It was very clean inside, there were fresh towels, and Elemis shower gel and shampoo, and you can request additional amenities if you need them. There was enough space inside for a couple of bags and a suitcase, plus a shelf, a couple of clothes hooks and a built-in wardrobe compartment in the door. There was also a toilet and a sink. A shower was just what I needed to feel refreshed after the journey, so much much appreciated.

I then headed through to the dining area where a welcoming breakfast buffet was set out – there was juice, tea, coffee, pastries, muffins, soft drinks, fruit, yoghurt, cheese, bread, and hot options including hash browns, scrambled egg, white toast, grilled tomatoes, baked beans, bacon, blood pudding, kippers and sausages. Everything was fresh and appealing.

There was free wifi with a code and plenty of seating areas including communal dining tables, armchairs and sofas. There is also the Concorde Breakfast room for added privacy. Shelves displayed magazines including Business Traveller, and newspapers such as the Daily Mail, Independent, FT and the Daily Telegraph. The décor is modern, with white floors and tables, stripy upholstery and coloured glass feature walls (green, purple, blue). There is some natural light as well.

The Elemis Travel Spa offers travellers a choice of free 15-minute treatments – a Flying Facial, Flying Feet, Exotic Hand and Arm Re-engergiser or Spot-on Power Back Massage. Each treatment takes place either on an Intelligent Massage Chair. Just book a slot on arrival.

VERDICT The late departure was a little frustrating but I slept well on the flight, which was the most important thing as I had to go straight to work the following morning. For this reason I was also very grateful for having access to the excellent arrivals lounge, which has plenty of showers so you don’t need to queue or rush, plus a good spread of food and a spa.

PRICE Internet rates for a return business class flight from London to Dubai in August ranged between £2,188 and £4,744 depending on flexibility. 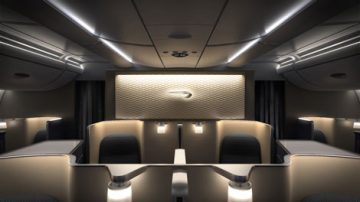