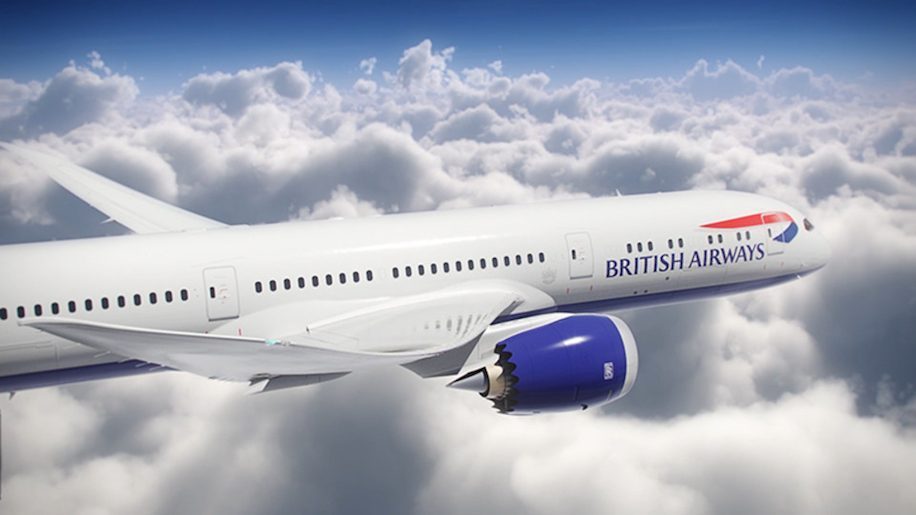 British Airways launched its London Heathrow to Austin service in March, the only direct route between the cities and the third Texan destination for the airline, after Houston and Dallas.

The route operates daily with one of the carrier’s brand new B787 Dreamliners.

I arrived at Heathrow Terminal 5 at 0930 in good time for my 1155 flight BA191 to Austin. I was dealt with immediately at Club World check-in and proceeded through the fast-track lane for security, which was similarly swift.

The flight was departing from a remote stand so I walked to gate A10C just after 1100 to get the transfer bus.

Boarding for the bus started as I arrived (no priority lane) and I was selected for a random body and belonging search before getting on. The journey was reasonably lengthy – I was on the aircraft just after 1130 and turned right for my section of Club World.

I was greeted warmly and offered a newspaper and drink, and given an amenity kit and menu.

Club World is set across two cabins with three rows (1-3) in the first and two (6-7) in the second, separated by a washroom and galley. There is another washroom at the front of the aircraft.

The rows feature BA’s familiar forward/backward-facing layout, although on the Dreamliner seats are configured 2-3-2 rather than 2-4-2, labelled A-B, D-E-F, J-K – for a seat plan, click here.

Upholstered in dark fabric with leather armrests, the seat is 25 inches in width and converts to a fully-flat 72-inch/1.83-metre bed by folding down the footstool ahead. The frosted privacy screen between seats is operated by a button at the foot of the screen, next to the seat controls.

Built into the dividing wall is the control for the in-flight entertainment (IFE) system, the screen for which — wider on the Dreamliner, measuring 12 inches — pops out from the dividing wall. You can tilt it towards you if you are reclined.

The table comes out underneath that and slides in and out, which is handy, although it bounced a fair bit when I worked on my laptop. It folds in half, which is useful if you just want to keep a drink on it.

The storage drawer at floor level had space for my laptop and the bits I needed for the flight. Next to it is a power socket and USB port.

Even though Club World was almost full, there was ample room in the overhead bins, which are bigger on the B787, with a 50kg capacity.

I was in backward-facing window seat 7K, which is one of the best if you want to avoid either stepping over or being stepped over by your neighbour when seats are reclined fully-flat, as it has unfettered access to the aisle.

The other seats offering that are 7A, 7E, 3A, 3E and 3K. The only downside to one of these, for me, might be that facing the bulkhead you don’t get as much of a sense of the Dreamliner interior, with its sleek feel and mood lighting, as you might if you were facing into the cabin.

Note also that row three is in front of the galley and washroom so is possibly more exposed to noise (especially 3F, positioned closest to the washroom) – still, A, E and K looked nicely tucked away to me.

What I did have the benefit of, being by the window, was being able to control the Dreamliner’s windows, which, instead of having blinds you pull down, can be brightened or dimmed to five presets – an excellent feature which can create a lovely ambience, not least because of the windows’ larger size and because they brighten or dim gradually, which feels more natural. Set midway, the sky outside took on a soothing blue tint, giving the feel of early evening outside rather than the afternoon.

As noted in a previous review, if you sit in backward-facing window seats 1A or 1K you can look out at the B787’s tapered wings, which flex during flight.

If space is what you’re after, go for one of the single backward-facing middle seats (E) as they are roomier and have an extra storage compartment to the side. If you enjoy the intimacy of a smaller cabin, pick the two-row section over the three-row one.

We pushed back on time and took off at 1220. After about half an hour there was a drinks service, followed by a three-course meal about an hour after that.

To start there was tiger prawn Bois Boudran (plump and flavoursome) with pepquino and crème fraiche, or vale of Evesham asparagus with Burford egg, shaved Parmesan and balsamic glaze. It came with a mixed salad and choice of rolls.

For dessert there was peach melba delice, ice cream or cheese. Tea, coffee and chocolates were then served, and bottles of water handed out. The crew were friendly and attentive.

While eating I tried out the Thales IFE system, which has an excellent choice of new movies and TV shows. I then got on with some work.

About five hours into the flight, the lights were dimmed so I used my reading light, positioned above my shoulder to the right and with a slider control, to keep working. Later on in the flight afternoon tea was served, comprising sandwiches, warm scones with cream and jam, and small cakes.

We landed ahead of schedule at 1540 local time and disembarked shortly afterwards via an airbridge.

Unusually, passengers at Austin-Bergstrom International airport collect their bags before passing through immigration and customs (there are not currently that many international flights which might explain that). Both were reasonably swift.

Highly enjoyable. The Dreamliner is a pleasure to fly, the Club World seat comfortable as ever, and the service excellent. For business travellers who travel regularly between the two cities, this direct service will be particularly welcome.