CHECK-IN I had been advised to arrive at the airport in good time for my 1640 flight (BA164) to London Heathrow as security can take a long time in Israel, so I got there a good three hours ahead at 1330. (It is a 30-60 minute drive from central Tel Aviv, depending on traffic, but on this occasion it only took about half an hour.) I entered through the doors marked 32 at Terminal 3 and turned left for security at the far end.

Before entering the short queue ahead of me, I was questioned by a member of staff about what I had been doing in the country, where I was flying to and if I had been given any gifts or things to carry. I said I had been given some Dead Sea bathing products so, after my suitcase was X-rayed, I had to wait 15 minutes for the bottles inspected.

At 1355, I joined the nearby line at desk 31 (BA had desks 31 and 32 for check-in, 30 for bag-drop, 29 for business class check-in and 28 for first). I had checked in online and accepted my pre-assigned seat (37K) as there wasn’t anything much better, but still needed to collect my boarding pass and drop my case off.

After I had done this, I headed for departures where I then had to go through another security check for my hand-luggage (laptops and liquids out, coats off). There was then a passport check, and as with when I arrived, I asked for the officer not to stamp it so she did the boarding pass instead. It was a five-minute walk to the main airside departures area, where there was supposedly the “biggest duty-free area in the world”, but upon seeing it I severely had my doubts about that. There was a large water feature in the centre of the hall, and flight status screens but no announcements. There was free wifi across the whole airport (no password required) and the place seemed pretty quiet.

BOARDING At 1630 the flight showed up as being delayed until 1715 – I had been told that it probably would be as the plane had taken off 30 minutes late from London. The boarding process began at 1650 and went to the final call at 1700. It was a short walk to Gate C6 and I was one of the last to get on. The crew were friendly and one of them said I “won the prize for the best smile”. I took my seat near the back of the plane and was pleased to find that no one was sitting next to me.

THE SEAT This B777-200 is configured 3-3-3 (A-B-C, D-E-F, H-J-K) in economy (World Traveller), 2-4-2 in premium economy (World Traveller Plus), 2-4-2 in business (Club World) and 1-2-1 in First. The seating, in blue, looked new and clean, and all passengers were supplied with a blanket, headphones, an envelope for collecting change for Comic Relief, a toothbrush and paste, and a pillow.

Although there are six-inch individual seat-back screens, entertainment was not on demand – instead, there was a choice of 12 channels with movies/TV shows screened on a loop. The tray tables were of a good size and there was 31 inches (78.7cm) of legroom, although there was an IFE (in-flight entertainment) box under the seat in front of me, which did restrict it somewhat. There were hammock headrests that make it easier to sleep as they provide support at the sides, but no in-seat power. (Only the B777-300ER offers this in economy.)

WHICH SEAT TO CHOOSE? World Traveller seats in row 26 are by the emergency exit so offer extra legroom, however, as usual tray tables come out of the arm and luggage has to be stored in the overhead locker if you sit here. Those in rows 39 and 40, and even 26, may find the proximity to the washrooms bothersome, as people may be queuing very close to you. The middle three seats at the back of the plane in row 40 are generally reserved for crew.

If you are a couple, you might want to choose the pairs in row 39 as they feel a bit more spacious and your won’t have a third person to contend with next to you. However, sitting at the back of the plane can be bumpier, and you may be last to disembark. Click here for BA’s seating guide policy and pricing for economy.

THE FLIGHT As there had been some problems getting the water system working properly, the aircraft had been 50 minutes late arriving. At 1720, the captain apologised for this delay and said the estimated flight time would be four hours 45 minutes. There was then a safety demo and take-off was not long after, at 1730.

The first ten minutes of the journey were quite bumpy, but once cruising, a drinks service started at 1800. The IFE system was also turned on and there was a BBC News broadcast before the movies began playing. Passengers were also informed that although the toilets on board were flushing, there was no running water so bottles had been provided to wash hands.

I was served my pre-ordered vegetarian meal before anyone else. It was a tasty cheese and mushroom ravioli, accompanied by a green salad with feta cheese, some chocolate cake, a roll and margarine, and a glass of red wine, which I requested. (Click here to view a photo of the meal on our Pinterest page.) As there was some turbulence during the flight, crew were unable to serve tea and coffee directly after the meal, for which they apologised. I spent the rest of the flight watching films or resting.

ARRIVAL We started our descent into London Heathrow at 2145 (1945 local time), and passengers were instructed to put their tray tables and seatbelts on at 2010. Landing was at 2040, after entering a holding pattern due to heavy air traffic over the airport. It took about 13 minutes to disembark via an airbridge, then an eight-minute walk to immigration. There were very long queues with three automated e-gates open, a couple for IRIS and about seven that were staffed. I was in baggage reclaim by 2120 and didn’t have to wait too long for my case to arrive.

VERDICT There was some delay to the departure of this flight, which was a bit of a nuisance, and it was a shame I was on one of the older B777-200s that didn’t have audio-video on-demand entertainment, but with a relatively short flight such as this (four hours 45 minutes) it wasn’t a big issue for me. The crew were professional and welcoming.

PRICE Internet rates for a flexible midweek flight in June cost £1,247 in economy with BA. 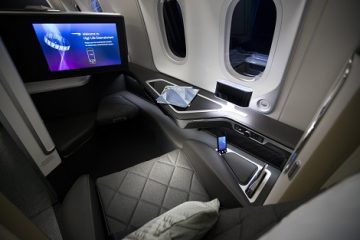 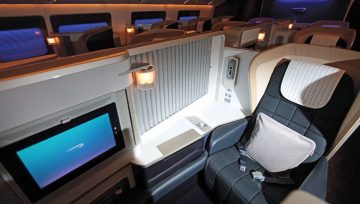