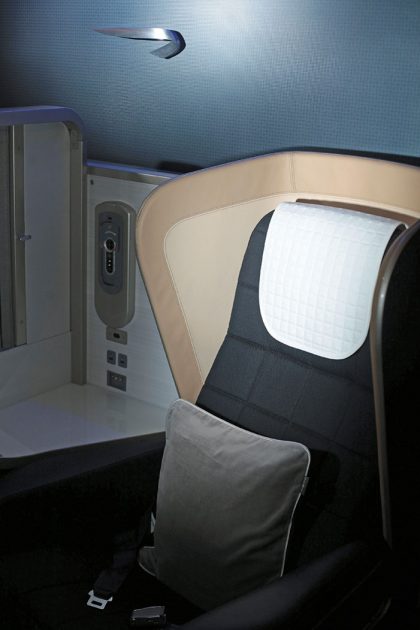 Background: I still think of this as British Airways’ “New” First, though it’s been around for some two years now and the majority of the long haul fleet has been fitted with it. To see pictures and to read more about the finer details of its launch, click here. This review isn’t perhaps as complete as it might have been because it was a short flight between London and Dubai, and a night flight, where I had to get some sleep ready for the next day, but I made as many notes as possible.

Check in: I checked in online, and arrived at the airport at 1920 for the 2140 departure on BA109. The airport was very quiet at that time, so after dropping off my bag I went through fast track security. At this point, flying First, I was one of the lucky few who can walk straight into the lounges via the door through to the Concorde lounge. Everyone else, even if gold card several times over has to do the long walk of irritation to the escalators, down a floor, and then walk back to come back up again.

The lounge: Passengers flying First or business, or holding Gold cards in the BA Executive Club can get treatments in the Elemis Spa. To read a full, if rather old, review of it from 2008, click here. As usual I checked to see if it was possible to get a treatment and for once, it was, though not with a therapist, but just a 15-minute session in the massage chair. I see from a previous review that even four years ago I was raving about the chair, but if I had all the money in the world one of the first things I would buy is one of them – they give a fabulous massage.

Prior to this, I had watched a fairly drunk couple ignore a member of staff as he tried to get them to head for satellite B where their flight to New York was closing. He didn’t have much luck with this, especially as they had just been given some food to eat (Caesar Salad, I think) and eventually they set off with just 20 minutes to go prior to the scheduled take-off time. Given that it takes at least five minutes to get over to there, sober, it would have been a challenge to make that flight. I wonder if they were allowed on to the aircraft?

I, on the other hand, had plenty of time and was determined to use it wisely, so I left my laptop in my bag and had a meal in the restaurant. The layout is in a series of booths, very private and comfortable. I had a glass of Taittinger 2004 (which was also being served at the bar, and indeed in the Gold Lounge across the way, I found later). The menu was short but to the point.

The menu also told me that vegetables were supplied by a farm within 50 miles, and all the fish had been sustainably sourced in association with the Marine Steward Council. Reassured, I had the “London cured” salmon followed by the cod, both of which were delicious, and in small enough portions for me not to feel guilty, knowing I would eat on board only an hour or two later, though the amuse bouche of mushroom and truffle oil (I think) did add to the overall meal. The choice of white wines were Sancerre, Meursault, Viognier and a Semillion. There isn’t a wine list, but the staff will bring the bottles over for you to look at them so you can make an informed choice.

Boarding: I got to the gate – Gate 48 – also over at B in plenty of time, and was escorted to my seat – 2A. I was offered a choice of water, juices or champagne, and asked if I wanted a sleep suit (I did). I was asked if I knew the seat – I did – and so was reminded that I had a small wardrobe and so could hang my jacket or they could do it for me. I made myself comfortable.

The seat: I know that compared to some of the “super suites” that are available in first class, BA’s “new” First has been a disappointment to some, but for me, it’s a vast improvement on what was there before. It ticks the boxes of –  comfortable for sitting, great for sleeping, with a decent table for working at and in-seat power. The design is easier on the eye than the old one, and seems to give you much more room, not just for sitting, but for sleeping as well. I like the way you can work using a laptop, for instance, then when the meal comes simply place it on the side table to eat. The IFE screen is a good size, and the headphones work well. I didn’t check out the IFE on this flight, but I believe it was the AVOD one, but not the newest which is on the B777-300ER. For more details, click here

That said, there isn’t a lot of storage space compared with other seats. You can jam a few extra magazines in the rack where the BA Highlife magazine is found, and inside the wardrobe there is space for a few more things in an elastic mesh pouch behind where your suit jacket hangs, and there is also room for shoes as well at the bottom of the wardrobe, but other than that, you have to get things out of the overhead locker. This flight was lightly loaded, so I used both my own wardrobe locker and that of the seat opposite once I changed into the sleep suit. I was also greeted by the Cabin Services Director, who was carrying one of the new BA iPads. For details of this, click here. The iPad told him about a forthcoming trip I would be making, also in First, so we talked about the destination, which he knew well, and he offered to help with some advice on what to visit, which was welcome.

The seat So I think it’s good for sleeping and for most other seated or recumbent positions, courtesy of what is, as far as I know, a unique system of a turn wheel like a volume control allowing you to adjust the angle of recline from upright to horizontal. Other seats have a button for up and down, admittedly, and this turn wheel does the same thing, but it is far easier and responsive to  play with, and means you can do your own version of Homer Simpson (“Bed goes up, bed goes down”)  for hours on end or at least until you are told to stop by the flight attendants.

To see a seatplan of the configuration on this flight, click here.

The seats are all similar, but I would avoid 4A which is too close to the rear galley and the only seat in that row. Also avoid generally row 1 because the curtain through to the front galley and washrooms is too close, and for the two centre seats (1E and 1F) the blue light above the BA logo swoosh on the bulkhead, though atmospheric, is distracting and in your line of vision. If you are flying on your own, I’d avoid the centre seats and take a window seat (A or K). The wardrobe is more easily accessed and you’re avoiding the potential problem of the centre concertina screen failing to work properly.

The flight: take off was on time, and once the seat belt sign was turned off, staff were quickly round with the drinks and taking our orders. Please skip through if this is of no interest.

(There was also a Bistro selection for those in a rush, with hot chocolate and chocolate chip cokes or cheese an fruit, but I went for the salad and the beef pie, and enjoyed it immensely, suprising since it was only 90 minutes since my last meal. )

I couldn’t try most of the menu and the wine list because it was a short flight and with the time difference, Dubai being three hours ahead at this point, it was even later. I finished the salad and beef pie – very tasty – and asked for my bed to be made up, which was done in double quick time. Then, using the eye mask from the Anya Hindmarch amenity kit, and ear plugs, I fell asleep and slept until an announcement for 40 minutes before landing in Dubai.

The staff were once again excellent, offering the full breakfast if we had wanted it, though I only had an orange juice, having already my calorie quotient for the week in only 12 hours. The choice was:  Fruit juice, smoothie (peach and apricot), yoghurts, cereals, fruit appetiser, warm turkey bacon roll, or a full English breakfast, or smoked salmon and scrambled egg burrito with cheese sauce, or blueberry French toast crumble with blueberry syrup.

Arrival: We arrived on time and were quickly off the plane and walking through Dubai Aiport to immigration, where there was no queue – Heathrow take note! Our bags were on the carousel within minutes.

Verdict: Very good. As with most night flights in First (and sometimes in business), I only wish it could have been longer, since it’s only after a good few hours that you can really judge how comfortable a seat is when horizontal and being used as a bed, but this was a good flight, with excellent service, good food and wine, and with no hold-ups.