BA started flying to Hyderabad in 2008 and recently upped this to daily (see news, August 5). This is the outward-bound flight, to read a review of the return flight from Hyderabad, click here.

I arrived at London Heathrow Terminal 5 at 1215 for the 1335 departure on BA277 to Hyderabad, a flight of 9 hours and 30 minutes duration. I had a couple of bags to drop off and had a chat with the man on the desk, then went through fast track security, which took about ten minutes.

The flight was going to depart from Satellite C (C64), which is accessed by a transit train from the main terminal, stopping first at Satellite B. There are no lounges over in C, so the choice is whether to use the lounges in the main terminal, or take the train halfway to Satellite B and then make your way over to C closer to the time of departure.

There are arguments both ways – for instance, the B lounge is one lounge (i.e. there is no demarcation between gold card and silver), and if you go to B you are breaking the journey on the transit train. So maybe it would be better to use the main terminal lounge and then do the journey in one go? Since I was tight for time, I preferred to halve the 20 minutes it can sometimes take to get to C, and so I went to the lounge in B.

Once there I took the escalator up to the lounge, showed my boarding pass and got a bowl of soup and a bowl of salad, as well as a drink of water. I then went back down and caught the transit to Satellite C, arriving there at 1300.

The flight was just starting to board when I arrived at Gate C64, with those needing assistance getting priority.

There were a lot of wheelchair users on this flight, as well as large extended families with many children and elderly relatives. Further delays were caused by a broken escalator down to the gate, resulting in everyone having to carry their bags down the stairs or use the lift. Also, despite being told not to, all passengers immediately lined up to start queuing, despite staff telling them that doing so would delay the flight.

The net result was that the priority queue for gold and silver card holders and business class passengers was swamped, and the flight took a long time to board. In fact, the supposed fast track queue was slower than the normal one, and those os us in it watched, bemused, as two gate agents quickly processed the general queue, while our own moved much more slowly with just one agent.

We then made our way down the stairs, carrying our luggage, and onto the air bridge, where we stood in a further queue for a few minutes. Finally on board, my jacket was taken, but I was not offered a drink, though those business class passengers who had got on board earlier were enjoying a choice of water, orange juice or champagne.

Our aircraft was a three-class B777-200 with economy, premium economy and business class seating. The business class (Club World) was in two cabins. To see a seatplan, click here.

The first cabin has 32 seats with four rows (2-5), with the classic configuration of AC-DEFG-JK. The second cabin has only two rows.

I was in the first cabin, in seat 4A.

I know many would prefer having 5A or 5K so they can get out of the door quickly after landing, while having unimpeded access to the aisle during the flight. But for me, that’s too close to the galley and the noise from there so I would go for the second cabin – 11A and 11K – which is what I did on the return flight and much preferred it.

More generally, if travelling alone, I would go for a window seat – I don’t like the aisles since you can get knocked by people coming up and down and while you are working, the food and drinks are served over you, while the passenger in the window seat steps over your feet. I’d go for row 3 or 4, A or K.

We eventually took off at 1415. A short while later we were given hot towels and Elemis amenity bags containing flight socks, eye mask, ear plugs, toothbrush and toothpaste, moisturiser and lip gel.

We were also handed our landing cards for India, which was good since it means you can remember to fill them in and not be rushed towards the end of the flight. The cabin was sprayed at 1440 thankfully before the meal service started.

I was impressed how quickly the flight attendants came round and asked for our food orders – around 1445, which was only about ten minutes after the seatbelt sign had been turned off. The menu was as follows:

I had the main course salad which was very tasty, and then slept for about four hours, waking to work, although annoyingly I had forgotten my adaptor for the plug in the Club World seat and so couldn’t charge my devices.

It’s a very early landing in India (0430) and of course allowing for the time difference, it is still the previous night if you are on UK time. So I struggled to have any appetite for the breakfast, although I had a fruit juice strawberry and banana smoothie but passed on the cooked options. The breakfast menu consisted of:

We landed on time and then taxied for about ten minutes, disembarking without delay on an air bridge.

There wasn’t a queue at immigration, but note that not only do you need the full address of your hotel to be completed on the landing card, but also the phone number of the hotel. A number of passengers were caught by this (I was one of them) and since everyone was tired reactions ranged from near tears to anger. I was somewhere towards the anger end, but luckily sarcasm came to the rescue, along with a half forgotten email with a phone number on it I could use to complete the form.

Make sure you’ve secured an early check-in at whatever hotel you’re staying at though. Sleeping in the lobby for several hours waiting for check-in time at 1400 won’t be a good start to your Hyderbad experience.

Nothing remarkable, but it’s great to have flights like that – on time, decent food, good service and a trouble-free arrival, well, until immigration.

The return flight was excellent, so adding the two together, I’d give this service high marks. 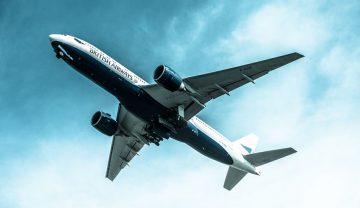 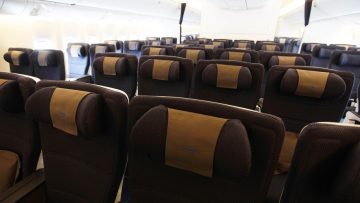