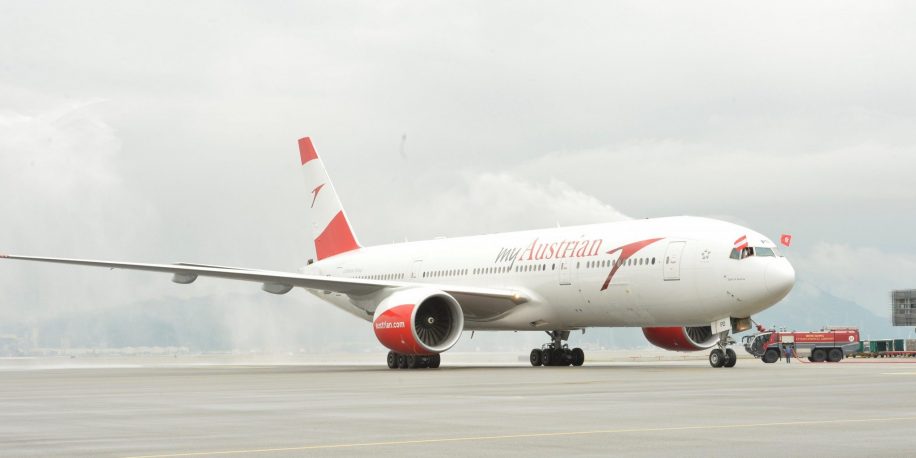 Austrian Airlines began a direct service between Vienna and Hong Kong on September 5 (see Austrian Airlines launches Vienna–Hong Kong service for more details) using a B777-200 aircraft  – it began a Vienna–Shanghai service a few months ago and also serves Beijing.

Counter 1 serves Austrian Airlines at the In-town Airport Express and check-in facility in Central district on Hong Kong Island. Booked on Austrian’s third return leg, flight OS068 departing 1255, I was processed within a few minutes and the train and immigration process at HKIA were fast and efficient.

There is of course no lounge access airside for standard economy passengers, so I left it fairly late before heading to gate 211 (the last stop on HKIA’s internal shuttle train). Boarding began at 1230, and was far more orderly than is usual in coach class. I had requested a window seat and was given 29A, in the middle of the rear cabin of the plane. The plane left the gate at 1305 and took off at 1313, just under 20 minutes behind schedule. The flight time was scheduled to be 12 hours 30 minutes on my e-ticket, but the pilot announced before take-off that expected flight time would be 11 hours 20 minutes – to an audible sigh of satisfaction from the passengers.

Economy in this aircraft is the increasingly common ten-across variety (3-4-3) – a tight fit that means seats are fairly narrow and shoulder room is at a premium.

A Chinese couple were seated beside me, and even though the lady next to me was not particularly large, in normal seating position we were joined from shoulder to elbow and sharing a 2.5-inch armrest.

Of course this is a typical situation on numerous airlines’ ten-across products, so it’s not a complaint aimed at Austrian – merely an observation that long-haul travel in coach class is not a proposition anyone looks forward to these days.

The seat itself, while narrow, was very comfortable: upholstered in two shades of grey and Austrian’s bright red, it was attractive, with decent side cushioning, effective head rest wings to stop your head from lolling when resting, and just enough legroom so that my knees were clear of the seat-back pocket. The drop-down table was small but sturdy, allowing easy use of a laptop and a solid base when the meal arrived. 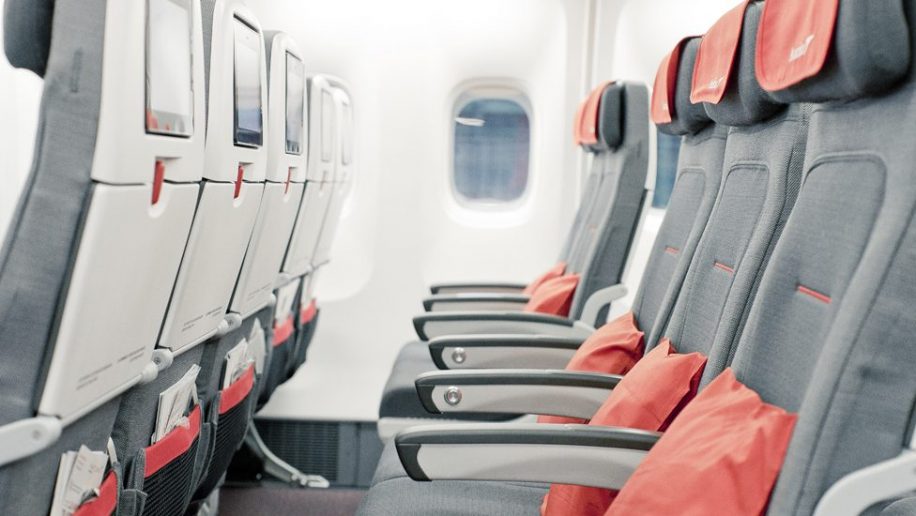 The IFE monitor, while it seemed small, was bright and clear, with excellent touchscreen control and an easily navigable menu containing around 500 hours of audio-visual entertainment. There is no remote handset in the side of the seat (except in bulkhead seats) or under the monitor – in fact there are no controls at all in the armrests except for the seat recline button (the seat back reclines relatively far for economy seating, helped by the seat sliding forward at the same time).

The sound jack for the monitor is located beside the screen itself – it’s a single jack so you can use your own headphones rather than the rather poor in-ear ones supplied, which I tried but gave up on quickly. Just above the jack is a USB port, but there is no standard power outlet for these seats. A coat hook is located on the side of the seat in front of you, which kept my jacket more out of the way than the usual location on the seat back facing you; it’s a minor thing but clearly a better design.

As the plane was backing away from the gate, the couple next to me spotted a middle row behind us with only one person sitting in it. Like lightning they were out of their seats and relocating so that the woman could have an empty seat on one side of her. This left me with three seats to myself – I could barely believe my luck!

Soon after take-off snack packets were given out and a drinks trolley offered juices, water and wines. An hour and a quarter into the flight our first meal was served – a choice of beefburger and mash or chicken breast with rice, choi sum and carrots. I chose the latter and was very impressed with the diced chicken in a tangy sauce and choi sum still with some crunch to it. The white wine was acceptable if unremarkable, and a nice touch was jasmine tea offered with the meal. 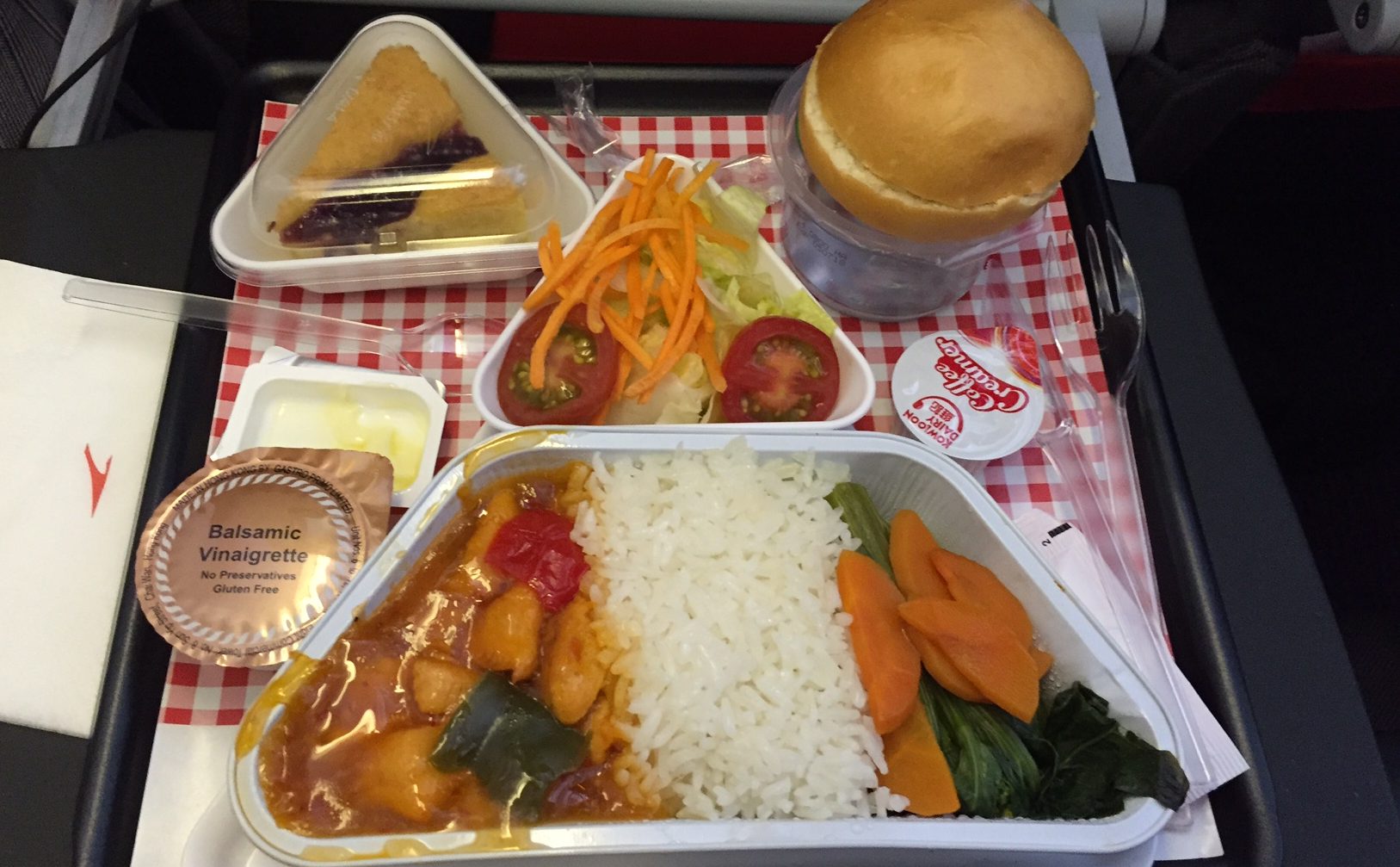 I worked for a couple of hours after lunch, though the cabin lights had already been dimmed and window shades closed so people could sleep, and I noticed the flight attendants making regular passes through the cabin to check on passengers, offer additional drinks, etc. There were times when I could see six staff all at once, communicating quietly and working seamlessly together. You don’t often see that in economy class cabins; Austrian use the tag line “We care” – on this evidence I would say they do.

I managed a couple of hours’ shuteye with the seat reclined and a spare pillow against the window, and 90 minutes before arrival the lights went on and a tasty light meal was served – a small bowl of pasta in a cream sauce with sliced ham and tomatoes, and a chocolate brownie. The smaller quantity was a good choice, since passengers’ body clocks are by now telling them it’s midnight.

The plane began its descent at 1800 local time and touched down at 1823, just over an hour ahead of schedule despite departing more than a quarter-hour late. Vienna airport is relatively small; there are only a handful of immigration control counters but they work very efficiently. Passing through, a monitor told me to proceed to carousel 6 for baggage reclaim and that it would take 10-16 minutes for the bags to arrive: they arrived in 14 minutes. Taxis were plentiful and it’s a 35-minute drive into the city centre in evening traffic.

A quality economy product. Admittedly I was lucky to have a row of three seats to myself, but even so, a well-made seat, great food and a hard-working flight crew providing very good service meant I finished an 11.5-hour flight with a smile on my face. Not often the case in coach… Jeremy Tredinnick

News
Austrian Airlines to fly daily to Manchester
29 May 2015