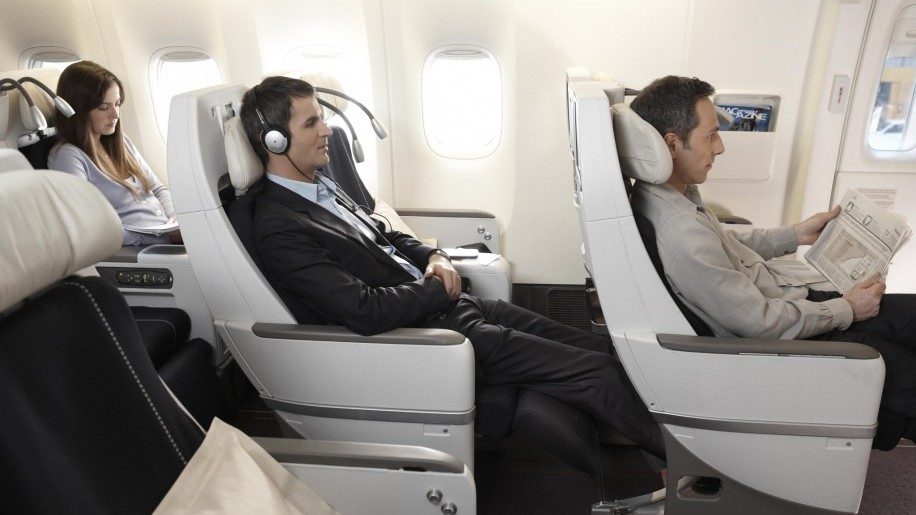 CHECK-IN I arrived at JFK’s Terminal 1 at 2120 for my 2320 flight (AF009) to Paris Charles de Gaulle, where I would connect to London Heathrow (for a review of the short-haul flight click here).

Check-in was in Zone A, where I encountered the most friendly and helpful attendant I have ever met. Not only did she talk me through the self-service check-in process while cheerfully enquiring about my stay in New York, but then explained that even without checked luggage, US procedures meant I still had to visit a counter with my boarding pass, and walked with me to the first available desk. Security was quick (laptops out, shoes off), and I was airside by 2135.

Boarding I headed straight to Gate 5A, where I sat and read to pass the time until boarding. This commenced at 2240, with premium economy (Premium Voyageur) passengers boarding first, along with business (Affaires) and first class (La Première) customers.

THE SEAT Business Traveller exclusively announced Air France’s decision to add a premium economy cabin to its long-haul aircraft back in 2008, and the product was officially launched on the New York route in October 2009. All wide-bodied aircraft are set to have the seating installed (except for the carrier’s B747s and B777-300 Caribbean aircraft), with its B777s now completed, and its A330s, A340s and A380s to be finished by December.

This B777-200ER has three rows (22-24) of premium economy, located between the business and economy cabins. The configuration is 2-4-2, and about half of the seats were occupied on this midweek flight. Air France advertises the seat as having 40 per cent more space than economy (Voyageur), which means a pitch of 38in/97cm, a width of 19in/48cm, and a 33-degree recline.

Unlike most premium economy seats, this one has a fixed shell so there’s no intrusion from the passenger in front of you when they recline. This, combined with the fact that the table is twice the size of that in economy, means it’s a great choice for travellers looking to use their laptop. There is a ten-inch TV screen (the same as in business class) with Sennheiser Noisegard headphones. The audio-video on-demand in-flight entertainment system had a good choice of movies and TV channels, with a bias towards French releases (with subtitles). There was also individual seat power with international sockets.

There is a metal support under each seat, meaning you have to place your feet either side of it to stretch out, but I found this was perfectly comfortable and there was ample legroom. Amenities included a pillow and blanket, a small bottle of water, and the same kit as in business class, containing an eye mask, socks, shoehorn, toothbrush, comb, Clarins moisturiser, shoe bag, and headphone covers. Overall, I was impressed by the seat – it felt smart and well built, and the fixed shell is a definite advantage.

WHICH SEAT TO CHOOSE? I was in 23B, an aisle seat in the second row of the cabin. With only three rows, there’s not a great deal of choice, but I would avoid the two seats in the middle bank of four, as you risk having arms and legs encroaching from both sides. In the front row (22), the table comes out of the armrest so is smaller than in the other rows, so if you’re looking to work, opt for rows 23 or 24.

THE FLIGHT The flight taxied on time, and took off at about 2340. Soon after, we were served dinner – Premium Voyageur customers receive the same menu as economy passengers, which in this case was a starter of orzo pasta with curry and grilled chicken, followed by a choice of beef with wild mushrooms and mashed potato, or Provençale-style penne pasta. I chose the beef, which was edible but pretty uninspiring. Dessert was cheese, tapioca pudding or cheesecake, and tea and coffee. Red and white wines were both Vin de Pays d’Oc 2010. I watched a film and got a couple of hours’ sleep before being woken for breakfast, which consisted of orange juice, a yoghurt, a muffin, and tea or coffee.

ARRIVAL We arrived into Paris on time at 1230, and were bussed to Terminal 2E. Note that short-haul flights to London also depart from this terminal.

PRICE Internet rates for a return premium economy flight from London to New York in September started from £1,008.