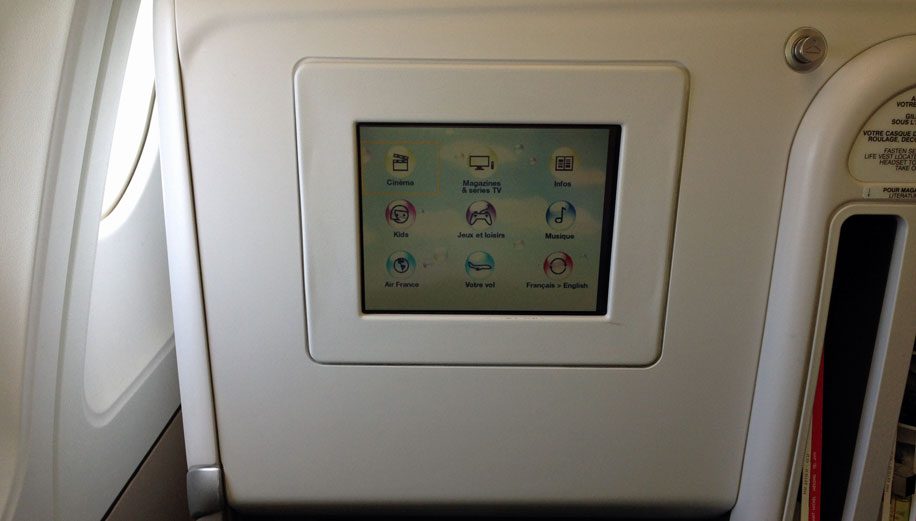 This flight was a return trip from New York JFK to Paris Charles de Gaulle. To read a review of the outward journey in Air France’s new fully-flat business class seat, click here.

As pointed out in that review, the new fully-flat business class has debuted on the B777 fleet and will be fitted to 44 of those aircraft, a process due to take some two years. When completed, the seat will next be fitted to the A380 superjumbos and the A330s, with those additional aircraft having been completed by 2017.

Until that time, Air France will have four types of long-haul business class flying for the next two years, and then three types flying until 2017.

I arrived at JFK airport at 1400 for my 1535 departure on AF0023. Air France flies from Terminal 1. Note that other Skyteam members fly from other terminals, and Delta, with whom Air France has a revenue share on the route has a new set-up at Terminal 4. To read about that, click here. Although it would make sense for the two carriers to co-locate at JFK, I was told this was not planned, and is unlikely to happen anytime soon.

Check-in was swift, as I did not check-in any bags, as was security.

Air France has its own lounge at Terminal 1, but this was shut for refurbishment. I’ve been unable to find out any information about what the new lounge will be like other than the fact that it will have a Clarins Spa; perhaps this webpage will contain more information at a later date.

In the meantime, the Japan Airline lounge is available. Unfortunately, this has a poor selection of food and although wifi is free, you need to get a voucher from reception and, if you have multiple devices, you have to ask for multiple vouchers.

Boarding took place at Gate 7. When I got onboard, a flight attendant greeted me, looked at my ticket, and told me I was in the front row.

I started to unpack my belongings, then realised that my seat, 6A, was in fact not in the front cabin, but in the second cabin, and the second row at that. So I collected my things, and walked down the aircraft to find the right row. Not a good start.

This is a lie-flat seat rather than fully-flat, meaning that when you recline it into a bed, it allows you to lie down, but not in a fully-flat position.

As stated before, Air France has several versions of these lie-flat seats. I thought this one was comfortable for sitting in, and very simple to operate — there were three controls which allowed positions for take-off, sleeping, or in a reclined resting position inbetween. The up and down arrows allowed positions between these, however, and I had no trouble controlling the seat.

It does lack personal space, however. Unlike the new 1-2-1 configuration, there’s no hiding the fact you are sitting next to someone, from the jockeying for position on the armrest to negotiating getting out of the seat to use the washroom, or making room for your neighbour to do so if you are in an aisle seat.

At 21 inches, the seat also felt quite narrow. But this is likely partly down to my flying the 1-2-1 seat of the new business class the previous day.

There are a couple of open storage positions between the seats, one for magazine, and one for shoes.

In addition, there is space beneath the footrest, although there is no storage permitted during take-off.

Before we taxiied to the runway, we were given our amenity bags, which come in four colours. 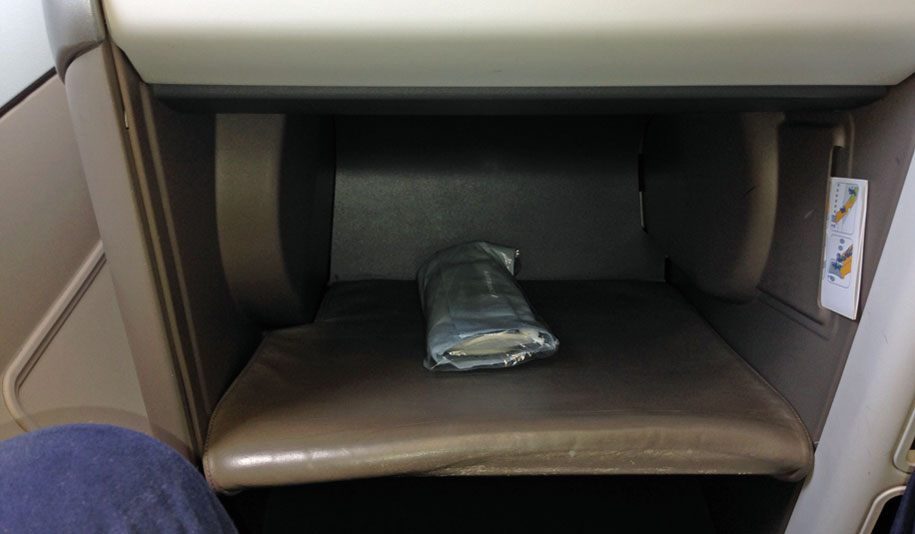 This is a 2-2-2 configuration, so it’s a choice between window or aisle seat.

I chose to sit by the window because all I wanted to do on this flight was sleep and didn’t want anyone climbing over me.

For my body-clock, this was a night time flight. Although the aircraft was taking-off mid-afternoon EST, I had only been in the US for some 15 hours, and was about to return to Paris and then on to Vienna via a connection.

The flight was due to land at around 0550, and my onward connection was 0715. So, with a flight time of less than seven hours, my interest in the seat and service was all about how much sleep I could get.

Menus were handed out at the beginning of the flight, but I had no intention of eating, and so waited for the flight to depart. As often happens at JFK, there was a long delay waiting for take-off as we crawled forward one aircraft at a time towards the runway, and this added a half hour delay. 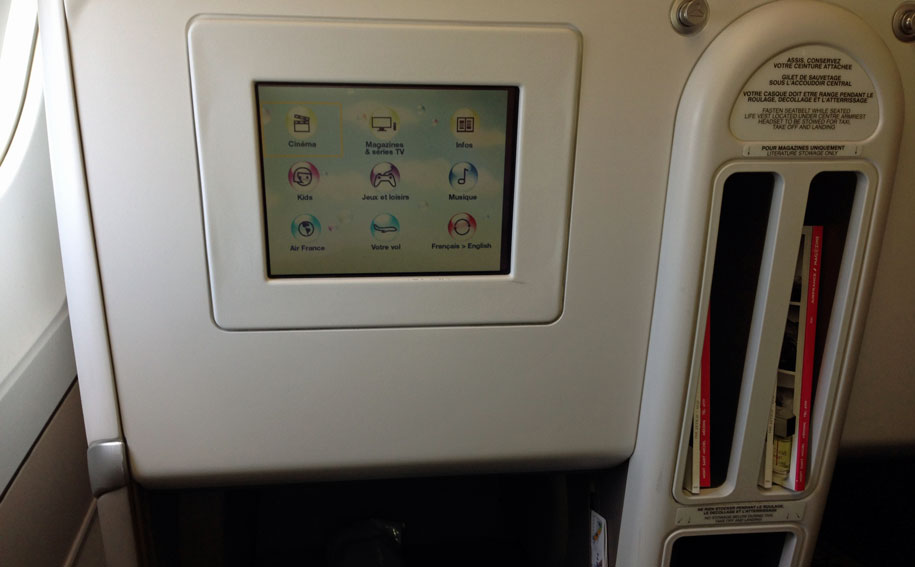 The menu follows. I didn’t eat anything, and I didn’t see the food being served, although I asked my neighbour what it had been like. He said it was tasty, but took too long for the service to be completed — nearly two hours — which made me very glad I hadn’t had to wait.

The wines were the same as we had been offered on the flight over the previous day.

After take-off, I donned the ear plugs and eye mask, reclined in my seat as far as it would go, and went to sleep.

I could hear the meal service carrying on around me, but whether it was because of tiredness or the ear plugs, or perhaps just a very quiet meal service, I was not awoken and slept for six hours.

The seat is fine for sleeping. Obviously, I was tired, so this made it easier. In fact, I slept so deeply I woke up with a painful neck, which of course, might be blamed on the seat, or just the fact that I slept very deeply and so didn’t move around as often as I should have.

I woke just as breakfast was being served, and had the Continental breakfast of orange juice, coffee, fresh fruit, yoghurt and some pastries.

We had made up a little time during the night but still arrived 15 minutes late at Terminal 2K.

We were quickly off the aircraft, and I then made my way to find my connection at Terminal 2E.

Air France is aiming to be among the top airlines in the world. Its new business class will give it a shot at this (it’s the same seat as Cathay Pacific and American Airlines’ new business class). And if the new JFK lounge allows dining before take-off, then that will maximise sleep time for these red-eye flights back from the US.

The service was fine after an initial hiccup, and there were apologies for arriving slightly late at Charles de Gaulle, although there was nothing Air France could have done about this, since the delay was caused by air traffic at JFK. It did, however, make my connection onwards for my Vienna flight pretty tight, but that’s another story.

The seat on the A330 is fine, but it is outdated, and feels a little cramped.