South Indian movie superstar, Rajinikanth is all the rage in that part of the country. Each movie release draws much adulation from the media and fans.

For his next release in July — Kabali — Air Asia will add to the flattery by flying a special Bengaluru-Chennai service on the movie’s release date. It will fly the route exclusively for Kabali and only on the day of its release.

One of the A320 from the airline’s fleet is already dressed in Kabali artwork. 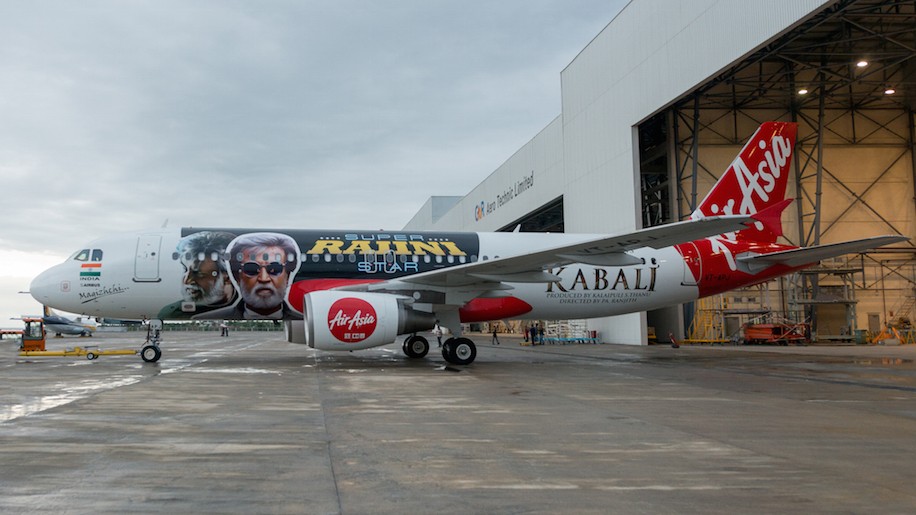 As the Bengaluru-Chennai flight is not a regular service, it cannot be booked through the airline’s website. Passengers need to phone on +91 80 41158492/8493 to buy a seat. They will then be directed to make the payment through travelmore.in, Air Asia India’s ticketing partner for the “Kabali” flight.

Travelmore.in is working with a tentative date of July 22 until the movie’s release date will be formally announced by the production house; subsequently air tickets will be transferred to that date.

The one hour flight will depart from Bengaluru at 0610 and the return flight will take off from Chennai at 1500.

The non-refundable ticket, priced at ₹8,056 per person, will include the Bengaluru-Chennai return airfare, movie ticket, music CD, movie merchandise, lunch, snacks, and two-way transport between Chennai Airport and the cinema.

Amar Abrol, CEO, AirAsia India says,“The Kabali fever is getting hotter by the day with fans across the world riding on the Rajini wave. We are delighted to partner with one of the most awaited movies of the year and we are overwhelmed by the kind reception we’ve received from our guests and fans on the association.This special plane is dedicated to Rajini fans across the globe. This is AirAsia’s way of paying a tribute to the one and only superstar in the country. We would like to thank the production house and Rajinikanth himself for the support they have extended to AirAsia in planning these special promotions.”