Five airline perks to help you snooze in the air 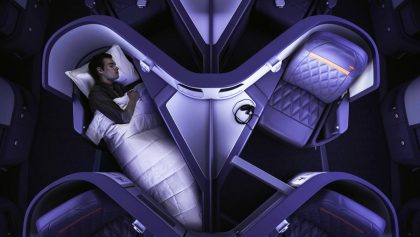 INFO US department store chain Saks Fifth Avenue raised plenty of eyebrows earlier this month when it announced that it would be partnering with United to develop custom bedding. The new offering, which will debut with United Polaris this December (see our story on United Polaris here), is designed to provide premium customers with a restful experience.

Delta was the pioneer of this trend when it began offering the Westin Heavenly bed on its flights back in 2013, but airlines such as Etihad (Coco-Mat) and SAS (Hastings) have also stepped up to help improve the sleeping experience in the air. 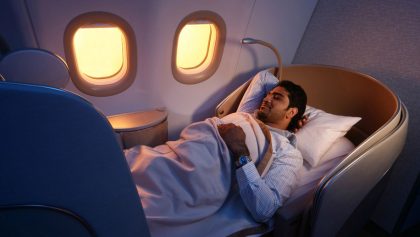 INFO At high altitudes, breathing becomes a key aspect of any comfortable flight and several airlines have developed ways to help make this easier. For example, Etihad’s signature pillow sprays and pulse-point oils, which it developed in partnership with Le Labo, help provide a light and soothing aroma that relaxes the senses.

All Nippon Airways takes this trend further by offering its first and business class passengers with two aromatherapy cards – “Relax” and “Refresh”. The former is a blend of lavender that is used to enhance the sleep experience, while the latter is used prior to landing to shake off any end-of-flight grogginess. Simply sniff and enjoy. 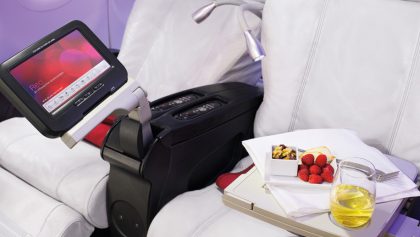 INFO While on-demand meal service is quickly becoming the norm for first class travel, the trend has yet to take off in business class. The concept is simple – allowing passengers to have their meals whenever they want it. Customers who wish to grab a couple more hours of sleep, for instance, can simply request that their meal be served at a later time. Unfortunately, due to the size of many business class cabins, on-demand meal service can be difficult to implement, explaining why this perk is still fairly rare for this travel class.

Virgin America pioneered on-demand dining back in 2007, which it made available in both its premium and economy cabins. Given that in-flight meals are only available for purchase back in coach, this meant that only a limited number of passengers would actually use the service. 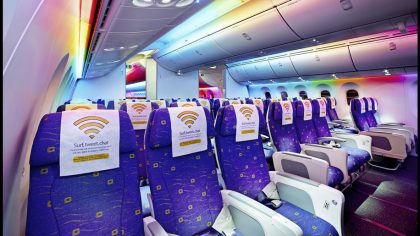 INFO Available as options on newer aircraft models such as the A350 and B787, mood lighting is designed to regulate the circadian rhythm, which determines a person’s sleep-wake time. Alternating cool and warm lighting schemes help reduce the effects of jet lag, and provide passengers with the ability to fall asleep more easily.

Finnair uses mood lighting heavily on its A350s. Warm, amber colours are featured on flights arriving in Asia, while a cooler “Nordic blue” hue is present while the aircraft is flying over Finland. The airline has also developed a 20-minute “sunset” lighting within the cabin, which is used when night falls during flight.

INFO Dedicated meditation programming is a rarity on most airlines’ in-flight entertainment systems. However, this could be a lifesaver for jittery flyers on carriers that do offer the perk.

Virgin America maintains an ongoing video series that borrows from the popular meditation app Headspace. Developed by Andy Puddicombe, a Tibetan Buddhist monk, the app offers a wealth of meditation and mindfulness techniques.