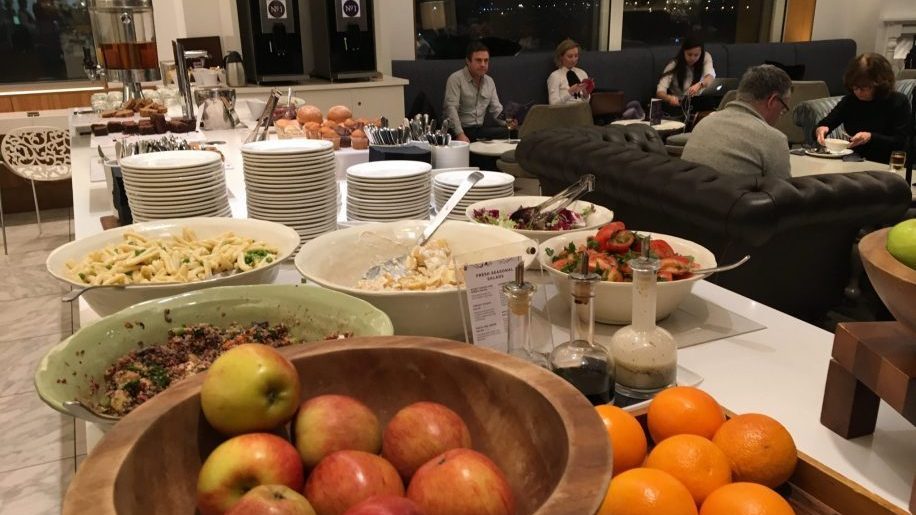 Business Traveller takes a look around the group’s first facility at Heathrow airport, with features including a spa, games room, a la carte dining and the first airside bedrooms at Heathrow for transit passengers.

The lounge at Heathrow Terminal 3 officially opened today (August 11), following two test days where airport staff were offered free access and spa treatments. The facility is located on the site of the former JAL lounge within zone F of the lounges area (above the BA Galleries and on the same level as the Servisair facility).

The lounge décor is similar to that of the recently-opened No.1 Traveller facility at Gatwick’s North Terminal (for a detailed review click here), with marble floors, pastel coloured patterned sofas and chairs, and bright, white walls and food and beverage areas.

Walking in through reception there is a long bar running down the left hand side of the lounge, with seating on the right, leading through to the self-service F&B counter where guests can help themselves to juices, cereals, croissants and fresh fruit for breakfast, and selected hot snacks and pastries throughout the day.

Visitors can also order complimentary table service food from the seating in this area, including bacon rolls and eggs benedict for breakfast, and soups, pizzas and salads later in the day. The group has also launched a paid-for a la carte menu at the Heathrow lounge (to be rolled out to the Gatwick North lounge from September), with choices including Moroccan lamb and Thai green curry. From October this concept will be headed up by an as yet unnamed “anchor chef”.

To the right past the F&B counter is the main seating area, with Chesterfield-style sofas, and chairs looking out on to the runway (above gate 11). There is a table with a selection of newspapers and magazines, and a counter for laptop use with sockets – the lounge does not have an actual business centre, but there are PCs and Macs located in various areas of the lounge, and wifi is free throughout.

At the end of the lounge area is a “Collectibles” display case, with aviation-related memorabilia including a BOAC-branded bag and champagne bottle, and just past this is a relaxation area with two swinging basket chairs and a living garden wall.

CEO Phil Cameron explained that the “fun areas” of the lounge are all located on a raised section in the middle of the lounge, with soundproofed glass walls, allowing kids (of all sizes) to play in the games room without disturbing other guests, and adults to sit in the library and still have a view over to the runway.

The aforementioned games room features table football, a bar billiards table, and (soon to arrive) a one-arm bandit fruit machine. There is also a room for smaller children with a white board wall and TV showing the aviation-themed Koala Brothers cartoon series, as well as further room with flatscreen TV and PS3 console.

The Heathrow lounge goes further than its Gatwick North sibling, with extra features including a ten-seater cinema showing classic British films such as Pride and Prejudice, Notting Hill and Slumdog Millionaire. There is also a “snug” area, where guests can pick one of three “pod-style resting cabins” to relax in before their flight.

Like the Gatwick North lounge, this new facility also features a travel spa, with seven treatment stations offering facials (£35), massages (from £18), manicures and pedicures, hair dressing, and traditional wet shaves (£35). There are also six shower rooms in this area, free for lounge guests or £12.50 for non-guests.

But the biggest departure from the group’s previous lounges is the addition of 12 airside bedrooms which, similar to the Yotel airport concept, can be hired by the hour. The first of its kind at Heathrow, the rooms are located outside the main lounge, in what was previously the Kuwait Airways lounge, and will open on September 30.

We were unable to see the rooms as they are still under construction, but they will offer pod-style beds with ensuite shower areas, TVs and minibars, and will cost £20 per hour for a single room, and £30 per hour for a double room (minimum two-hour stay).

Clearly these rooms are aimed at the large number of passengers transiting through Terminal 3, with Phil Cameron saying that there is a potential market of over two million connecting passengers per year with over two hours “dwell time”, and over 900,000 with over four hours to spare.

Cameron also pointed out that while there are only 12 rooms, the short stays mean that he estimates No.1 Traveller will be able to turn them over five times per day each, effectively making a total of 60 rooms. Cameron said that if these rooms are successful the group may look to expand the offering into other vacated areas of the terminal in the longterm.

The lounge is open from 0430 to 2230 daily, with entry costing £25 per adult when booked online in advance, and £30 at reception. Cameron said that from September the lounge will be partnering with Oman Air to allow its premium passengers entry to the lounge, similar to Delta’s agreement at Gatwick North.

While no deal has yet been done with Heathrow Express to allow first class passengers free entry to the lounge (as has been the case with the Gatwick and Stansted Express services),  Cameron did not rule it out, saying that “bundling makes a lot of sense”.

Finally Cameron said that the group’s next move will be to expand its existing lounge at Gatwick’s South Terminal, which he admitted is now “at capacity”. He also said that the group would “like more space at Heathrow” in the future, and would look for further opportunities at airports “in excess of ten million passengers”.

Aside from the two Gatwick lounges and this new Heathrow facility, No.1 Traveller also offers two lounges at Stansted, one at gate 49 serving Ryanair flights and another at gate 16 serving all other international passengers.

Previous news from No.1 Traveller: 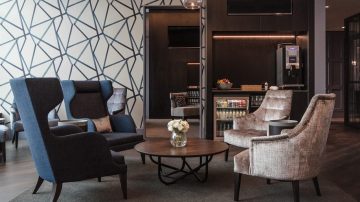