Airbus unveils the aircraft cabin of 2050 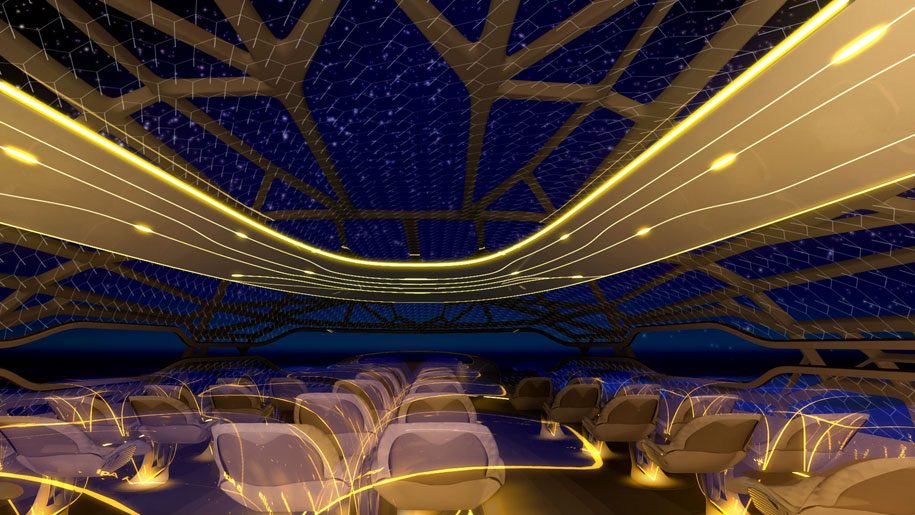 Airbus has unveiled its new “invisible” concept cabin of 2050, providing passengers with unobstructed views of the skies – an innovation that will definitely not be for the weak-hearted, vertigo prone traveller.

According to Airbus’ Passenger 2050 survey, almost a third of the respondents said “they want the flight itself to feel like a holiday experience.” Part of achieving this would include a biopolymer membrane, which would be lighter and more fuel-efficient, as well as offering “panoramic views of the world outside through large areas where the lining can become transparent at the wave of a hand.”

Other innovations would include an “intelligent” morphing seat that would adapt to each passenger’s size and demands, offering massage, drinks or vitamins if needed. These would be necessary given the growing number of female travellers, passengers above 60 years old and obese travellers, states Airbus. With research showing that obesity in America alone is expected to reach 65 percent by 2050, it believes that “with more people travelling and their size, shapes and needs changing, aircraft cabins need to change right alongside them”.

The new aircraft will also do away with the three-class seating system and instead, opt for zones, such as an interaction zone, to target the passenger’s more specific needs. For example, there will be bars, a virtual gaming wall and other areas in the interaction zone, allowing more interaction and even meetings.

The aircraft itself will have longer and slimmer wings to reduce drag, lightweight materials and, of course, more fuel-efficient engines.