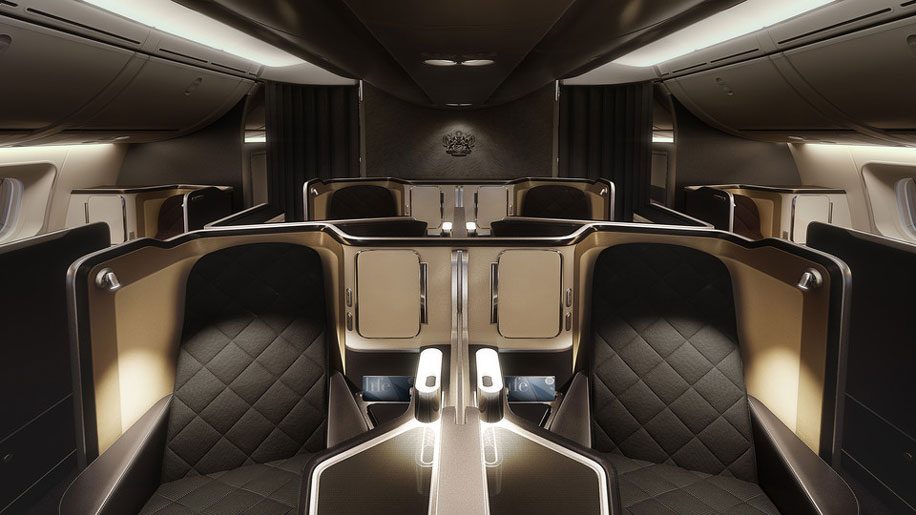 The most immediately obvious difference in the cabin are the blinds over the windows, which for this cabin mock-up, were lowered with a lovely blue striped light emanating from them. The old First seats have standard porthole windows which, depending on which window seat you are in, means a window can be almost exactly between one seat and another, leading to some confusion as to whether it is “yours” or your immediate neighbours (it’s also difficult for the cabin staff to reach over and lower this blind). The new electronic blinds solve this problem by grouping the windows into pairs and them eliminating the third window altogether (it’s still there, of course, but is blocked off by the cabin interior). The effect when the blind is down is impressive, and that’s the intention, since BA wants the First refit to look back to the age of luxurious air travel and its own origination, which it is stating as being 1924, the date when Imperial Airways was incorporated (for a history of BA click here.)

The window blinds are part of this, creating a kind of futuristic railway carriage feel to the cabin, as does the colour scheme of the cabin – naval barrathea – which as well as being a type of material, was described to me as the deep navy blue colour which naval officer’s wear. Other details are the Fougasse cartoon character which graces the front of the new menus (below). I hadn’t heard of him, but this is the pen name of Punch cartoonist Cyril Kenneth Bird, who was badly injured by a mine in the World War I – a Fougasse, apparently). Bird drew many propaganda posters as well as work for the London Underground and various government ministries. (To see a sample of his work on an external site, click here. The cabin has been designed by agency Forpeople which has also done work with Aston Martin and Jaguar. Perhaps in readiness for comparisons to other recent first class upgrades and new products, the unofficial line is “We don’t do bling”. BA says that they have paid a lot of attention to detail and concentrated on what people want rather than what they don’t want, with the emphasis on heritage, including the reintroduction of the British Airways Coat of Arms. As BA said in its teasers for the new First “The words “To fly to serve” … are even more relevant today. We’ve drawn on that heritage to refine all aspects of our First service.” But back to the cabin. The lighting has six pre-sets for different scenarios (plus another for taxiing, take-off and landing). All the new lights are LED, with even the overhead reading lights – halogen and unreliable – being replaced. There is an ambient light with lightshade and a bulkhead light at the front of the cabin described as a “wash light” which illuminates the Speed Marque, which is the official name of that ribbon logo you see everywhere. The configuration and footprint of the seat in the cabin is the same as it is now  (click here for a seatplan of this if you haven’t flown it). BA says that the new seat has between 55-60 percent more personal space than the previous First seat through the clever use of space and better materials. This is difficult to judge, particularly in the mock-up cabin. The bed is certainly the same length as before (six foot six inches), and to control the seat in all its positions a rotating control is used, very similar to the iDrive feature on a BMW, being a dial which allows you to recline to the full bed position.

It is coloured blue unless it is in take-off or landing position in which case it is green, allowing the cabin staff to quickly see if you have done as you were told prior to landing. It’s difficult to see in the small thumbnail image here, but the buttons immediately above the dial are simply for the reading light and the ambient light, while the ones below control the adjustable headrest and the lumbar support – not the angle of the seat. Unlike other business class and first class seats, there is no “single push” to recline the seat. I was told that was a safety issue, though I’m sure there are plenty of other airlines which have this feature of a single push to turn the seat into a fully flat bed.

The side table you can see in the picture above looks as though all you have to do is press a button for it to lower and disappear, but it’s a solid feature and one out of which the main dining tray table appears (you lift up the top of the side table, press down and the dining table appears). Between the side table and the surround part of the seat there’s room for a few magazines, but you would struggle to get a paperback book in there.

All seats have a wardrobe for stowing your suit jacket, though only the window seats have a small alcove at the bottom of this suitable for shoes. On the matter of storage, I thought there was a lack of this around the seat. You could, in theory, store something under the footstool / ottoman seat in front, but not for take off or landing, and besides, this footstool has a neat feature where it pivots forwards and lowers so in a partly reclined position you can rest your feet on it. I tried this and it was very comfortable, but obviously couldn’t be enjoyed if you had stored a bag under it. (I’ve also learned that there are vents under the seat, so perhaps another reason not to block this area.)

There’s a personal wardrobe, and the recessed cubby hole at the bottom of this (see picture) for the majority of the seats, but laptop bags and wheelie bags would all have to be stored in the overhead lockers. Both window seats and centre seats have these, they have not removed the centre ones to give more head room. All of this gives the cabin an uncluttered feel, and maximises the amount of personal space each seat has, but if like me, you travel with a laptop, iPod, books, newspaper and magazines you might miss the shoe or laptop drawer feature from Clubworld. Or maybe not if yo uforget and leave things in it regularly. If this was a review of the flight, then the menu would be described here. Instead, on the “hard product” side there is a seat for those who want to try buddy dining, with its own seatbelt. The tray table is robust, and is a composite material with a screenprint surface and what was described to me as a “self-healing” lacquer surface. If you fold the table in half, it then has a leather surface. I was also told that there is now enough room that if you are working and the meal service comes, this can be placed on the side table while you finish up what you are doing. As far as the food is concerned, the galley has both a new steam oven and a new espresso maker, allowing for improvements in both spheres, apparently.

The seat reclines fully flat (or three degrees from horizontal, but with the angle of the aircraft that is flat). There are soft cotton pyjamas and a Turndown Service “with a single–piece quilted mattress, crisp white 400–thread Egyptian cotton duvet and pillow” and Anya Hindmarch washbag filled with DR Harris products. (eye gel, lip balm and moisturiser). I’m told that the wash bags will also have the Royal Crest “To Fly, To Serve” which is being resurrected from the archives.

The IFE system is the same Rockwell Collins AVOD one currently in use on the majority of the long haul fleet. The new screen pivots out of its recessed holder and has a 15.4 inch touch screen (nb: the flash caused the blinds to go grey – they are blue). The IFE screen has three new features: a USB socket for charging, a RCA socket for video input, and a “picture in picture” facility, allowing you to watch the moving map (for instance) while still viewing a film. There’s also a quick Map button for going to the map instantly (it’s the centre of those three that you can see in the picture at the bottom of the screen). The headsets are the same noise-cancelling ones as are currently being used, and the IFE control is also the same as that in ClubWorld and the current First.

There is a PC power socket uk/eu +us plugs providing 110v 60Hz in addition to the usb.

These have more room than the window seats, both around the feet, and also in terms of storage area around your elbows, though obviously these areas have to be cleared for takeoff and landing. The main difference from the previous version of First is that there is now a large manual blind between the seats (pictured) which gives you complete privacy from the person sitting in the adjoining seat. This draws horizontally across the space (not up and down). The intention is for this to be closed when passengers arrive but then if you are travelling with a partner it would be drawn back to allow you to sit together in the same way as works now. Like the new Clubworld seat, this £100million First product is an improved version of what has gone before rather than a new direction.

To those who know and love BA First, it will be welcome, though the wait to encounter it may be frustrating, since there will be an initial delay of 90 days before the next aircraft is refitted, and then the B777 will gradually be renewed before the B747-400, so it could be two years before you fly new First.

For detractors, it will be seen as too little, too late, especially with some of the new first class products which have been introduced in the last three years, some of which now term thenmselves as “suites” and have sliding doors and even showers onboard.

If the food and service are good (and BA puts all three crew dedicated to the First cabin through Premium Service training) then the seat and the bed will play its part in keeping BA in the premier league of airlines offering a well-respected and admired business and first class product. As regulars of Clubworld who are upgraded or burn some miles in First know, the feel is very different from a relatively crowded business class cabin, with only 14 passengers compared to what might be anything from 38 on a B777 through to 70 on a B747-400.