The premium check-in area, due to open on November 5 followed four days later by the lounge’s second floor, will help Skyteam consolidate and strengthen its presence at the hub airport. Indeed the facilities are adorned with the alliance’s branding.

The dedicated check-in will be available to premium economy, business and first class passengers, and also Skyteam Elite and Elite Plus passengers, and has 14 desks, ten self-service kiosks plus luggage drop-offs. There is also a small but spacious seating area for waiting passengers.

The Skyteam lounge’s new upper level is aimed at business travellers and intended as a “quiet zone” despite the presence of a children’s play area in one corner. Although it is largely similar to the lower level with all the same design principles, vertical gardens by Patrick Blanc included, significant differences lie in the absence of a wine bar and the increased number of power points (at every chair).

The upper level also offers four “beds” (see images below), each in its own small and dimly lit room. There are no massage chairs or an oxygen bar on the new level, replaced instead by a discrete first class seating area and extra PC workstations giving the impression of an area geared towards quietly catching up on emails or sleeping than extravagant relaxation. The Playstations, so prominent in the lower level, are not immediately obvious upstairs as they have been cleverly hidden away. The opening of the new facilities has been carefully timed. From next month, they will be shared by all Skyteam airlines at Heathrow when they complete their move to T4. Delta Airlines, KLM and Kenya Airways will be joined by Aeroflot, Air France, Alitalia, Czech Airlines and Korean Air throughout November.

Marie-Joseph Malé, Skyteam’s managing director, said the move to T4 and the use of shared alliance-branded facilities was an “essential part of its global strategy” and “increased co-operation between members.”

Skyteam’s plans at Heathrow echo its move this week to Barcelona Airport Terminal 1, which also has similar shared facilities. All eight Skyteam members at Barcelona now use T1. 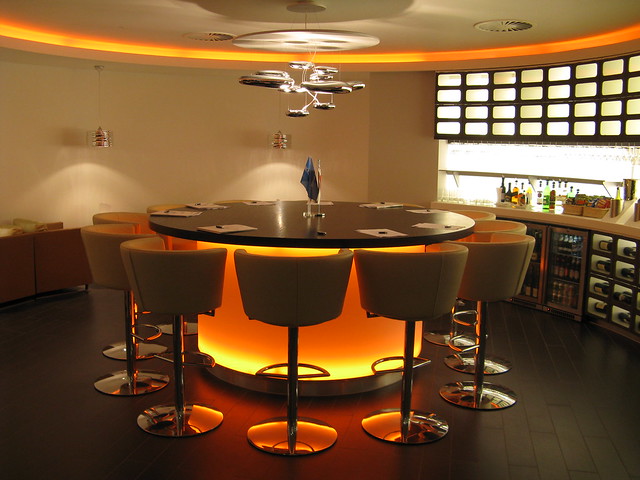