Health: Pull your socks up 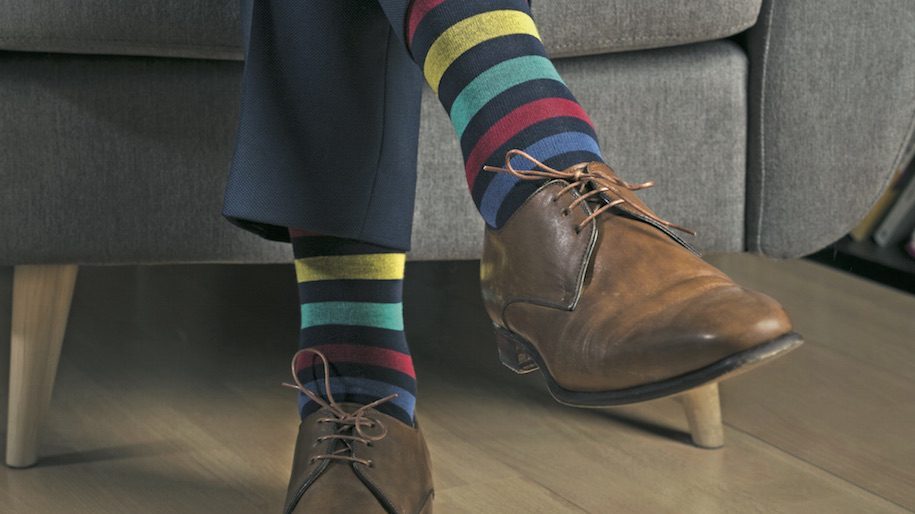 Of all the health issues in air travel, deep vein thrombosis (DVT) attracts the most attention, with court cases against airlines regularly hitting the headlines. In the unlikely event it happens to you, it is potentially very serious, possibly even fatal, but in a survey on businesstraveller.com, 45 per cent of respondents said they do not use any precautions to reduce the risk. Now that scientists are beginning to understand more about the link between flying and DVT, is this wise?

DVT occurs when restricted blood flow leads to the formation of a blood clot in a deep vein of the leg – symptoms include a swollen or painful calf or thigh. In rare cases it can become life threatening. This happens if part of the clot moves to the lungs causing a pulmonary embolus which, if severe, may cause the lungs to collapse. Although most attention is devoted to DVT after a long-haul flight, you don’t need to fly to get one; each year it occurs in between one and three people per 1,000 people according to the UK Department of Health (only one in 100 cases is fatal).

There are several factors that increase the chance of developing DVT (see box), and as a result, some people are more at risk than others. In recent years though, it has become clear just how common it is for our bodies to form tiny blood clots.

John Scurr, consultant vascular surgeon at the Lister Hospital in London and DVT expert, explains: “We’ve known quite a lot about DVT for a long time, but now we know even more. We have much better ways of picking it up using highly sensitive ultrasound scanning machines, and the thing that has become obvious is that it’s a much more common condition than we thought – even in people sitting at their desk for long periods. You lay down, or develop, clot quite regularly, but there is a system in the body that dissolves it. So if you sit for a long period you will start laying down clot, but when you get up and walk around it goes. This is a natural biological process.”

Translate this to a long-haul flight, where travellers are confined to a small space for a long period, and clots become more likely. Scurr says: “If you’re flying and you get a bit of clot and you get off the plane and immediately back onto another plane your exposure is increased – your opportunity to get rid of the clot is decreased, so you’re more at risk.” He emphasises that this can easily be resolved with simple precautions, including exercising in-flight (see later).

In other words, as long as you remember to move around the cabin periodically you should be able to minimise your risk. However, a recent study in The Lancet provoked controversy by suggesting DVT is caused by more than just sitting still. Researchers at the Leiden University Medical Center in the Netherlands measured the levels of certain blood-clotting agents in 71 volunteers during three different situations: (1) sitting still on a long-haul flight, (2) sitting still at ground level and (3) during a normal day’s activities. They found significantly more signs of clotting during the flight than at ground level, suggesting that something in the aircraft other than being immobile was causing the clotting system to react.

The researchers looked for differences in the conditions between ground level and the aircraft environment and suggested it could be due to reduced oxygen pressure, which occurs when the aircraft is pressurised to 8,000ft, producing a state called hypobaric hypoxia. This speculation paved the way for headlines such as “poor air quality causes DVT”, ingeniously managing to tap into not one, but two of our most dreaded fears about air travel.

What does this study mean? It has caused fierce debate because, apart from drawing cabin air quality into the fray, it used people who already had an elevated risk of DVT. Most studies use subjects with no known risk factors, but in the Leiden study about half of the volunteers had them. Specifically, they were either women on the contraceptive pill or they possessed a particular gene mutation (called factor V Leiden) that increases susceptibility to DVT. Some of the volunteers had both of these risk factors – perhaps unsurprisingly they were the highest “responders” when it came to clotting activity in-flight.

Ultimately it shows that air passengers with risk factors are more likely to develop DVT than those without, says Dr Suzanne Cannegieter, co-author of the study. But she also believes it confirms the link between DVT and air travel. “There is definitely a link. The results from all the studies show there is a two to threefold increase in risk compared with not flying.” However, she adds: “As the baseline risk is so low [1-3 in 1,000 people] this is still very low, and it’s only for a short period of time – while you’re on the plane.”

It is important to keep this risk in context, says John Scurr: “[The volunteers] were an enormously high-risk group – most of them were suffering from thrombophilia [an inherited tendency to form blood clots] – so the whole thing has to be kept in perspective. There is a suspicion that there are some factors specific to air travel that increase the risk slightly but these risks remain quite low and they can be minimised by simple precautions.”

He has little time for the hypobaric hypoxia theory: “There’s no evidence for that – there’s a hundred different things that happen in planes. There was a higher incidence in flyers but we don’t know the reason for it.”

Patrick Kesteven, consultant haematologist at the Freeman Hospital in Newcastle accepts that air travel comes with a higher risk of DVT but admits it is not clear why: “We have argued about whether it’s because you’re more cramped in a plane, whether you travel for longer sitting still than in any other form of transport, or whether there is something that is riskier in a plane than other forms of transport.”

Dr Kesteven is chairing a scientific executive committee conducting a large research project into DVT and travel, under the banner of the World Health Organization (called the Wright study). As part of this research, a large study involving thousands of air travellers has found that, on average, one DVT case occurs in every 6,000 journeys of over four hours.

Does this mean with every long-haul journey you’re more at risk? The simple answer is that no one knows for certain. Cannegieter says her team will publish results of a study of the DVT risk in frequent flyers later this year (we will provide an update later in the year), but for now John Scurr has some reassuring advice for business travellers: “Cumulatively they are more at risk, but the risk is still small – again, with sensible precautions they’ll work their entire careers without any problems.” He is clear about the need to further explore the issue: “The only way to do it is to get a large number of people flying and scan them to find out what causes the problem – it’s a question that definitely needs to be addressed.”

What should you do?

Although statistically the chances of developing a DVT in-flight are low, that doesn’t mean it’s sensible to ignore the issue entirely. Both the Civil Aviation Authority and British Air Transport Association recommend that passengers who think they may have risk factors should consult their GP before flying. It’s also wise to invest in a decent pair of flight socks – in a review of research published in April in the Cochrane Library journal, flight socks were found to reduce the risk of DVT by up to 90 per cent. But don’t just snatch up the first ones you can find. Kesteven says: “Travel socks, unless they fit perfectly, are not only a waste of time, they may be harmful.” What experts advise – and what good pharmacists will do – is to take your foot and calf measurements to find the right size sock. Scholl’s website recommends people to “have one measurement under the guidance of a healthcare professional” to ensure correct fit.

In-flight DVT compression socks work by squeezing the legs and promoting blood flow through the deep veins, preventing them from enlarging during periods of inactivity. John Scurr recommends Mediven socks, which he has studied in-flight. In a study in 2001, he monitored long-haul passengers and found tiny blood clots in 12 out of 100 people (in most of them the clots disappeared without treatment). In a further 100 passengers who all wore Mediven socks there was not a single clot.

Medi UK gives advice over the phone to customers on how to correctly measure yourself for flight socks (call the free hotline on 0800 085 3630). The right fit is crucial: if you buy socks which are too loose they will be ineffective; too tight and they will be restrictive.

Frequent flyers can also take Zinopin Daily, which has the same blood-thinning effect as aspirin. Zinopin was developed as a safer alternative when it became clear that travellers were taking aspirin regularly, which can cause stomach bleeding. Because it’s preventative, you won’t know if it is working, admits Scurr, but he believes it does: “We study large numbers of people and get a lower incidence of blood clots [with Zinopin] so we know it works.”

Above all, DVT experts recommend staying active during long-haul flights – bad news if you like to settle into your flatbed and doze off immediately after take-off. Suzanne Cannegieter says: “People who need to travel a lot, and travel long distances, need to think about doing exercises. The best thing you can do is keep active and not to sleep all through the flight, take sleeping pills or drink too much alcohol.”

The UK Department of Health recommends consulting your GP before flying if you:

The risk is higher in those over the age of 40 and in women taking the contraceptive pill or hormone replacement therapy, or who are pregnant or have recently had a baby. Precautions such as flight socks and exercise will lower your risk.