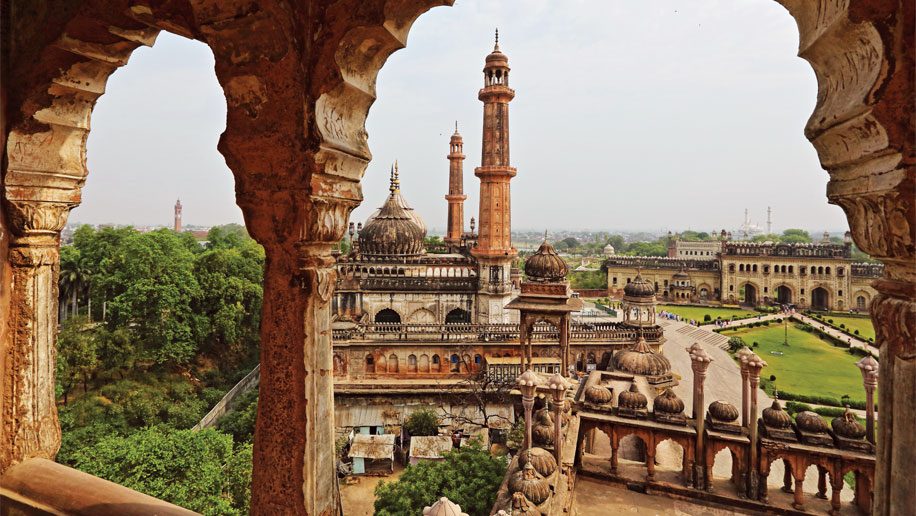 Steeped in history, the thriving North Indian city is a fascinating place to spend time in, writes Amar Grover

In Indian elections, it is almost a political truism that whichever party wins Uttar Pradesh wins the country. Arcing across the north’s vast Gangetic Plain, this is India’s most populous state. Its teeming capital, Lucknow, is one of India’s fastest-growing cities, but it has also long been among the region’s most overlooked tourist destinations.

Lucknow has been important for centuries and, for the British, it was an epicentre of 1857’s Indian Mutiny (or as Indian historians refer to it, the First War of Independence). It proved a pivotal event that shaped the Raj, and you can gain an insight into the period by visiting the city’s old British Residency complex.

Nowadays simply signposted the “Residency”, it has become as much a neat public park as a national monument. “I used to come and play cricket here as a youngster,” recalled Shariq, my guide, now in his mid-twenties. “It was easy to sneak in – the guards didn’t really care and the grounds were never this well maintained.” These days, paid entry has thinned the crowds and dislodged gangs of mischievous youths; there are now more discreetly courting couples than ball games beneath the swaying palms.

Originally lying on the edge of the city, it was Lucknow’s nawabs, or kings, who permitted the Residency’s construction for East India Company officials. The walled enclave was virtually a self-contained colony with fortified gates and batteries, a treasury and a church, a mess hall, post office and numerous other outbuildings, including the Resident’s two-storey villa. The entire complex stood on elevated ground and its defensive qualities ensured that 1857’s
six-month siege was both harrowing and heroic.

Today’s neat gardens and manicured lawns soften the crumpled shells of those original structures. Post-Mutiny, the British pretty much left the ruined enclave as an eerie but potent memorial and, post-Independence, India changed little. An annexe of the main Residency building is now the 1857 Memorial Museum and on even the most cursory of visits, it’s worth lingering here. A detailed signboard seems remarkably even-handed about the episode. Not only is “the history of the freedom struggle… inscribed on every brick” but these same bricks also echo “the heroic deeds and sufferings of many Britishers and natives who defended the Residency”.

Inside are displays of weapons, a model of the Residency in its prime, documents, paintings and lithographs depicting personalities and incidents relating to Lucknow and the siege. Look up towards the ceiling in one of the rooms and you’ll see the most affecting reminder of all – a gaping hole in the cornice left by a cannonball that on July 1, 1857, killed one Susanna Palmer, daughter of Colonel Palmer. She was 19. 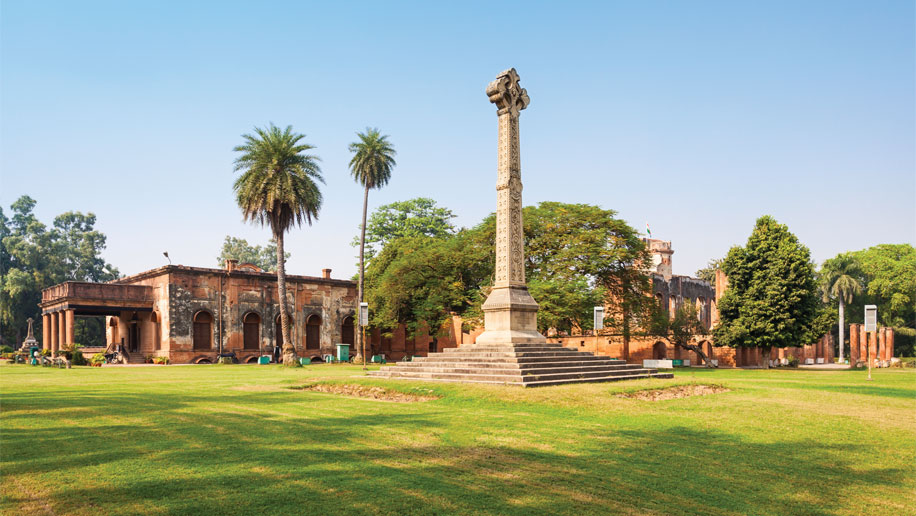 Shariq and I headed on to the old quarter and its warren-like streets, lanes and alleys. It’s here that Lucknow’s profound Muslim heritage is most apparent, one of which Lucknowites seem particularly proud. It probably stems from the generally tolerant culture of its nawabs and a feeling that its rarefied manners and etiquette were and still are a fine cut above the rest.

By 1775, Lucknow was the new capital of Awadh, a relatively small but important kingdom whose wealthy nawabs had Persian roots. The city throbbed with merchants, mercenaries, adventurers, artisans and arms dealers from the Middle East, Armenia and even France. For foreign visitors, it confirmed their most romantic fantasies of oriental opulence and splendour. The nawabs’ court became a byword for refinement, courtesy and elegance. Their culture distilled a strange mix: outwardly quite westernised, with European-style architecture, chandeliers and a penchant for cherry liqueur, yet inwardly traditional and conservative, favouring Indian furnishings and segregated women’s quarters.

Cunningly nibbling away at this royal court was the East India Company. Securing its insidious grip on power, the Company appointed puppet nawabs seemingly blinded by their own pomp. It prospered mightily from (if not actually drained) Awadh’s deep coffers. Several factors gave rise to the 1857 Mutiny; Lucknow was a major flashpoint. When the dust finally settled, the British government decided it had to assume the Company’s powers. Within 20 years, Queen Victoria became Empress of India.

Before delving into Lucknow’s faded but still imposing monuments, Shariq and I strolled towards the market area known as Akbari Gate. One of the city’s most enduring – and celebrated – legacies is its cuisine; numerous high-end hotels across India now proudly offer “Nawabi cuisine” or “Lucknowi kebabs” on smart menus. Much to my satisfaction, we went distinctly local where, arguably, the greasier the joint, the better the food.

The chief attribute of a Lucknow kebab is its extraordinary melt-in-the-mouth quality. “You don’t need to chew,” insisted Shariq, “because it’s tenderised by pounding.” Well, that certainly explained the cross-legged chap I saw out front maltreating a mound of mince. 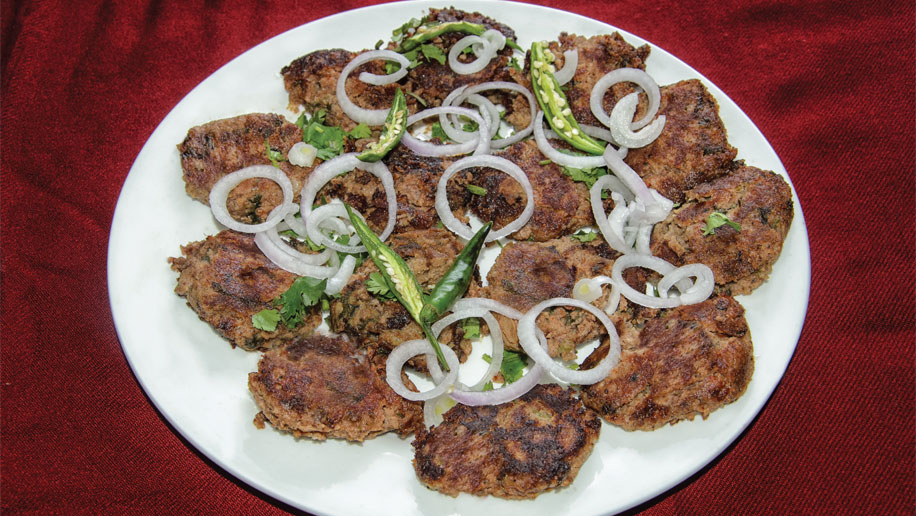 So we invested a good hour or so at Mubeen’s (one of three side-by-side eateries owned by three cousins) sampling galawati kebabs, and then a slow-cooked nihari mutton stew mopped up with kulcha, a kind of naan bread made with milk. “But here in Lucknow we use saffron-infused milk,” Shariq beamed.

Later, on a nearby street, skewered kidneys and liver straight off a brazier lured me like a bloodhound. I drew the line at Kashmiri chai, a luridly pink concoction resembling warm strawberry milk, but admired the vendor’s exotic-looking samovar. We wrapped up with kulfi, a traditional Indian ice cream, the dense consistency and caramelised notes of which are achieved through patient reduction of the milk. Dispensed in sealed capsules, it looked like nothing but tasted like heaven; “Lucknow’s best,” urged Shariq as I attacked my third.

On a grand scale

In the wake of the Mutiny, some vengeful officials sought the razing of Lucknow’s surviving palaces and mansions. Thankfully that didn’t happen, so today you can still drive through the extraordinary Rumi Darwaza – loosely modelled on Istanbul’s Sublime Porte – a triple-arched gateway that once marked the city’s main entrance.

Of Lucknow’s surviving imambaras, or congregation halls, the Bara Imambara is probably the most impressive and certainly the most visited. Strongly resembling a mosque, an imambara is a focal point of annual gatherings and commemorations. This splendid example also houses the tombs of its sponsor, Nawab Asaf-ud-Daula, and his architect in its cavernous vaulted hall.

Completed in 1791, the fluted archways, ornamental domes and cupolas are thoroughly un-European. Between ceiling and roof terrace stretches a maze of passageways and chambers with a reputed 489 identical doorways; I found myself swept along with a cheerful throng of families, shrieking children scampering about not quite getting lost.

From the terrace there are views across its lawns and the adjoining Asfi Mosque, with its sleek pair of minarets. Fanciful rumours persist of secret tunnels – to the nearby Gomti River, to Allahabad and even Delhi. 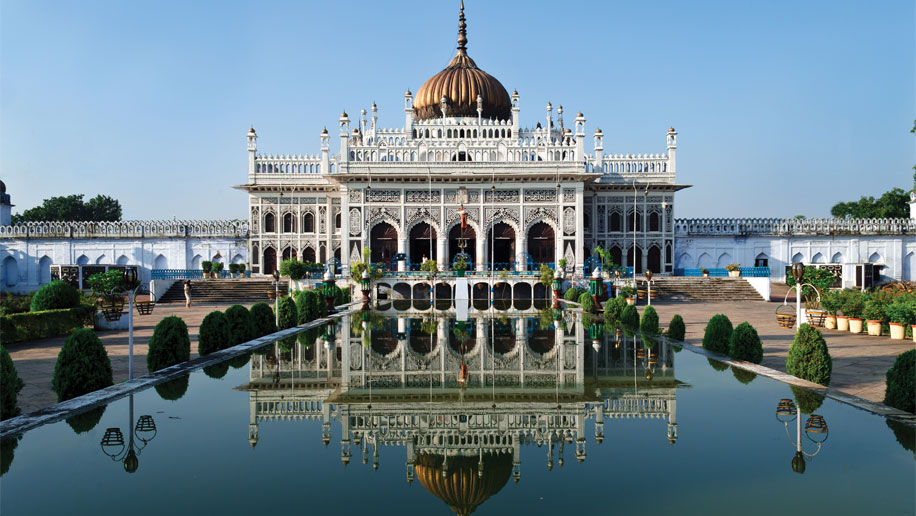 Of old Lucknow’s surviving architecture, none bridge the nawabs’ and colonials’ world quite like La Martinière College, named after French soldier-adventurer Claude Martin. Martin eventually joined the East India Company, cultivated the Nawab and his inner circle and grew extremely rich. Built in the 1790s as his country retreat, Constantia, as it was then called, proved an unconventional mix of styles – Gothic, Georgian and Palladian along with Mughal and Nawabi touches – that has long divided opinion.

Only in 1845 – 45 years after Martin’s death – was his scholastic bequest achieved when the boys’ college opened. Its pupils and staff were caught up in the Mutiny and evacuated to the Residency. There, nourished on buffalo-head soup, they helped with its defence in an episode now firmly part of Martinière lore. The college remains one of India’s most famous and successful public schools.

If you ask politely and look the part, its guards will probably wave you in for an informal visit. Martin’s bust stands beneath a chandelier in the main entrance lobby amidst engraved wall plaques and memorials; his body lies in a crypt. The façade is bedecked with statues, including a pair of surprised-looking lions, while the imposing rear terrace and cannons face a dried lake bed.

Driving around Lucknow, I passed a large, enigmatic-looking space enclosed by severe stone walls. Racetrack? Presidential palace? Army HQ? No, none of these. The Ambedkar Memorial public park immortalises Bhimrao Ambedkar, a hero of the Independence movement who championed social justice and, in particular, the rights of dalits, the “untouchable” caste. While it also honours the lives of other notable social pioneers, the memorial has proved highly controversial on account of its colossal cost – seven billion rupees, or 75 million pounds, according to some estimates. 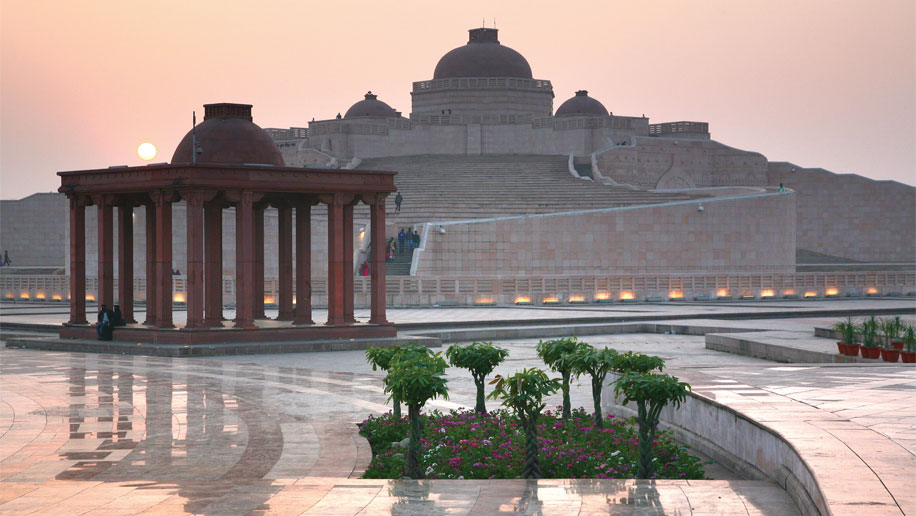 Begun in 1995 and eventually opened in 2008, the complex is paved with 14 hectares of Rajasthan sandstone and is blindingly hot in summer and incredibly hot for most of the remainder of the year – “park” always seemed like a misnomer. It’s all seen as another questionable, if not vanity, project of its controversial proponent, Mayawati, former chief minister of Uttar Pradesh. With her incredible near-rags to riches story, the so-called “Dalit Queen” boasts millions of devotees despite accusations of corruption.

Standing in the blazing sunshine, the memorial’s twin rows of 60 elephant statues looked a sort of bleached white to me. I marvelled at the coincidence of their noble likeness being her political party’s mascot. By night, its spotlit colonnades and domes look rather fetching. The centrepiece is a striking, almost Mesopotamian, star-shaped terrace surmounted with a domed memorial hall – from above, it resembles a fidget spinner. I’m not sure the nawabs would entirely approve. 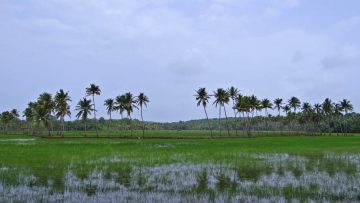 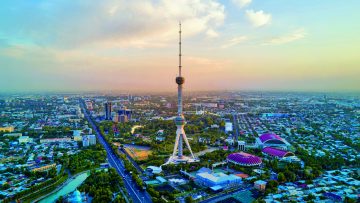