It’s been a while since we looked at the latest hotel developments in New York. As always, it doesn’t take many months to pass in the Big Apple before a new hotel opens or an existing property reveals a renovation or a reflag.

Four Seasons added a second Manhattan hotel in the autumn of 2016, balancing its 57th Street I.M. Pei-designed outpost with one downtown next to the Woolworth building. Sternlicht’s 1 Hotels also went for a sequel to its Central Park-adjacent hotel, but opted for a waterfront location in Brooklyn, where the limestone tower that Robert A.M. Stern designed for Four Seasons is part of the skyline across the East River seen from its tenth-floor rooftop pool.

Also on seconds, but moving in the opposite direction: Firmdale Hotels. Its original Crosby Street hotel got a sibling up on 56th Street called The Whitby, with the brand’s signature factory-style windows and bold, clashing prints. Rather than the planned start of Commune’s Tommie Hotels, we welcomed Arlo Hotels in Hudson Square and NoMad. Thompson opened The Beekman, incorporating the gorgeous 1883 Temple Court backed by a contemporary high-rise. And of course, the major groups continue to expand, bringing brands in a variety of segments all over the city: fitness-oriented Even Hotels from IHG, millennial Moxy Hotels from Marriott, and more.

Looking ahead, here is a selection of hotels coming to New York over the next few years. 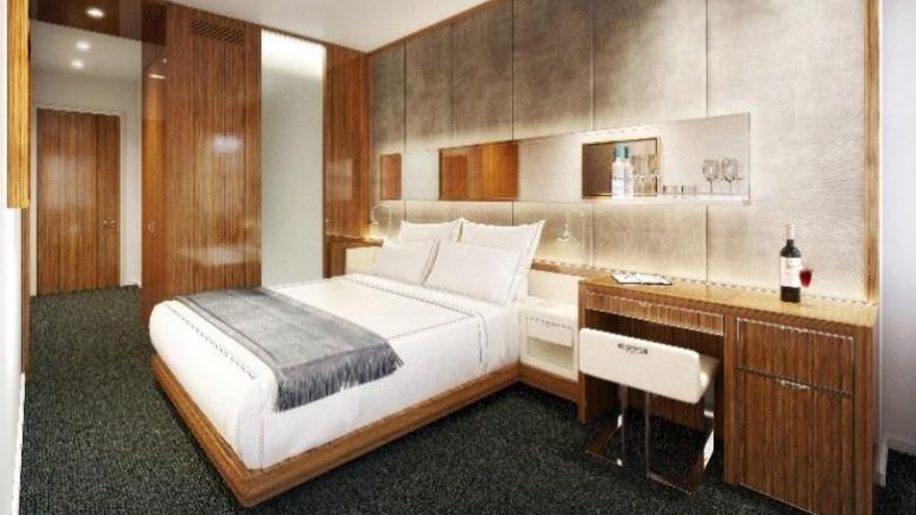 Part of the regeneration of the Seaport district in Lower Manhattan, Mr. C Seaport should open in the first months of this year as the East Coast counterpart to Mr. C Beverly Hills. Conceived by the Cipriani family, it will occupy an existing red-brick building on the corner of Peck Slip and Front Street, at the foot of the Brooklyn Bridge. Inside will be just 66 rooms, including ten suites with terraces, done in teak wood, greys and cream. Additional facilities include a lobby lounge, function space, fitness centre and a ‘traditional Cipriani Italian dining experience’. 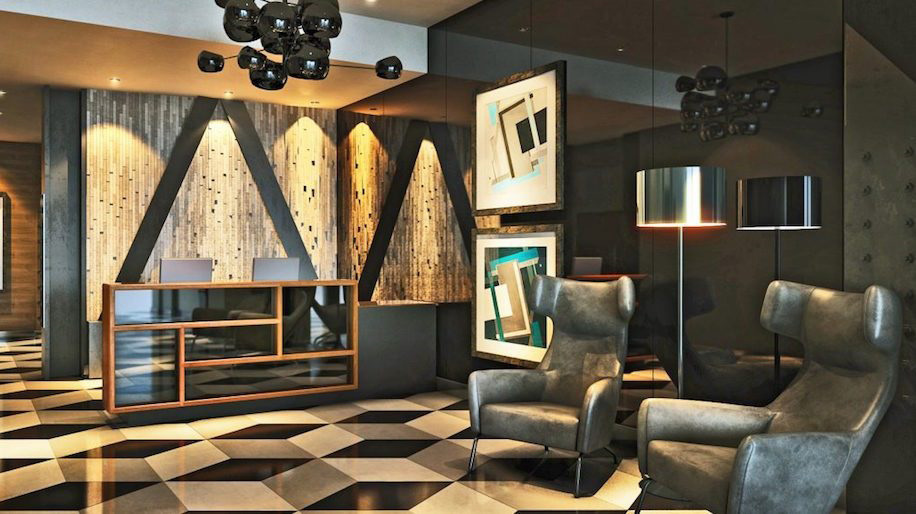 Even further towards the southern tip of Manhattan is The Artezen, a conversion of an office building into a 21-story hotel, two blocks from the World Trade Center. Scheduled for second quarter, there will be 89 ‘high-tech’ suites crowned by HIDE, a two-story sky lounge and restaurant. 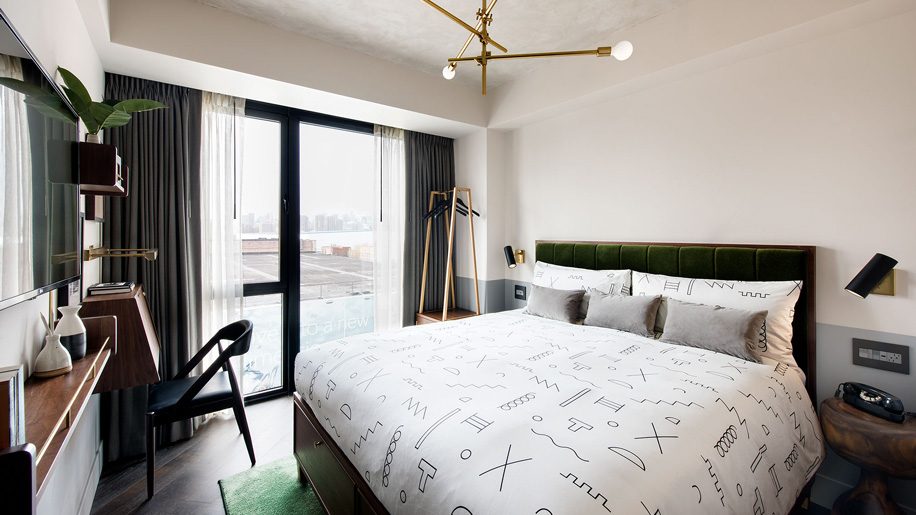 Joining the hotel boom in Williamsburg this summer is The Hoxton, which when completing its takeover of the former Rosenwach factory will have grown to a handful of hotels in four countries (aside from its London home, there are Amsterdam and Paris). The Hoxton Williamsburg will have 175 rooms, with first photos showing many of the things we’ve come to know and love of the group: wooden floors, crisp white sheets (here with another distinct pattern), metal accents, and for this particular outpost, green velvet headboards. Unsurprisingly, public spaces are a big focus, with three restaurants, outdoor space, and a rooftop bar. More is on the way to the United States, with a trio of hotels planned for Portland, Los Angeles, and Chicago. 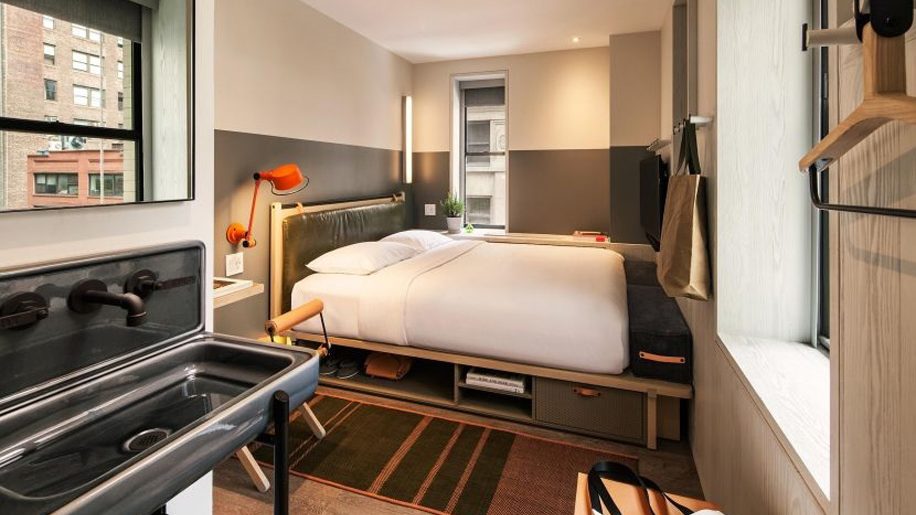 Micro hotels continue to march on everywhere, and surprising no one, they do so exceedingly in a place as short on space as Manhattan. Last month, Pod Hotels opened its flagship Times Square hotel with 665 rooms; coming in at 115 sq ft they easily qualify for the micro label (some have bunk beds, others a queen).

It beats Moxy Times Square by about 50 rooms in size, but Marriott’s millennial brand counters with interiors designed by Yabu Pushelberg. The Pod Times Square is the third Pod hotel on Manhattan (there is also one in Brooklyn), Moxy will add another four this year: in Chelsea, in Greenwich, on the Lower East Side and Downtown. A quick count on Moxy’s website shows the brand now has nearly thirty hotels up and running across the Americas, Europe, and Asia, with a slew more to come. 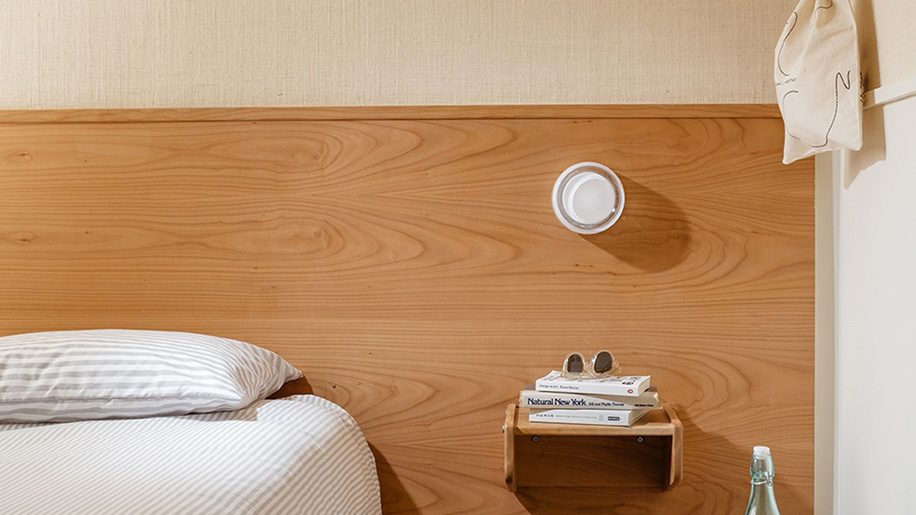 Continuing in micro-hotel world, later this year Sister City New York will open, from the people behind Ace Hotels. Its florid description contrasts with its reason for being: an ‘experiment in essentialism’, with rooms taking inspiration from the ‘functional perfection of Finnish saunas, Japanese bento boxes, rock-cut cliff dwellings of prehistory and John Cage’s 4’33″’. A conversion of the Bowery Salvation Army building, there will be 200 rooms, a ground-floor restaurant, and rooftop bar.

Virtually next door, at 189 Bowery, Citizen M has been slotting together the 300 modular rooms that were constructed in Poland. Rising 20 stories, it will be the second citizenM for Manhattan (the other is near Times Square); given their modular nature, rooms will be as we know them, and public spaces will be packed with Vitra furniture. 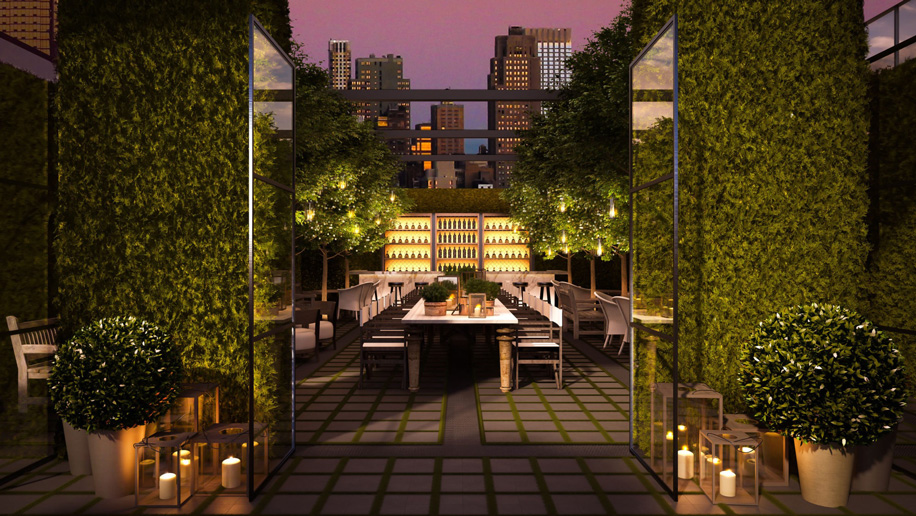 Likely closer to the end of 2018, Edition Hotels will bring its second hotel to Manhattan, as part of the seven properties it has promised us for this year (that list has Shanghai, Bangkok, Bodrum, Barcelona, and Los Angeles on it as well). Built on top of a 120-foot tall, 18,000 sq ft LED display, the hotel will have 452 rooms, complete with a beer garden overlooking Times Square. 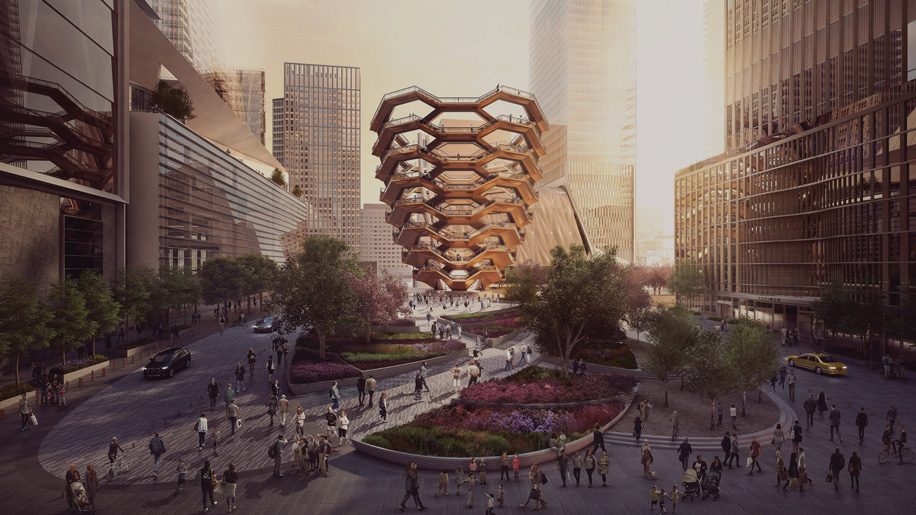 The announcement that haute-fitness chain Equinox was moving into hotels came with the ambitious target of opening 75 properties around the world; just how serious it was about this new venture became clear when it hired Christopher Norton, COO of Four Seasons, as Chief Executive of the new hotel division. Exactly what this translates into we’ll hopefully find out next year at the Hudson Yards development, with Yabu Pushelberg-designed interiors and a 60,000 sq ft Equinox club – its largest to date. 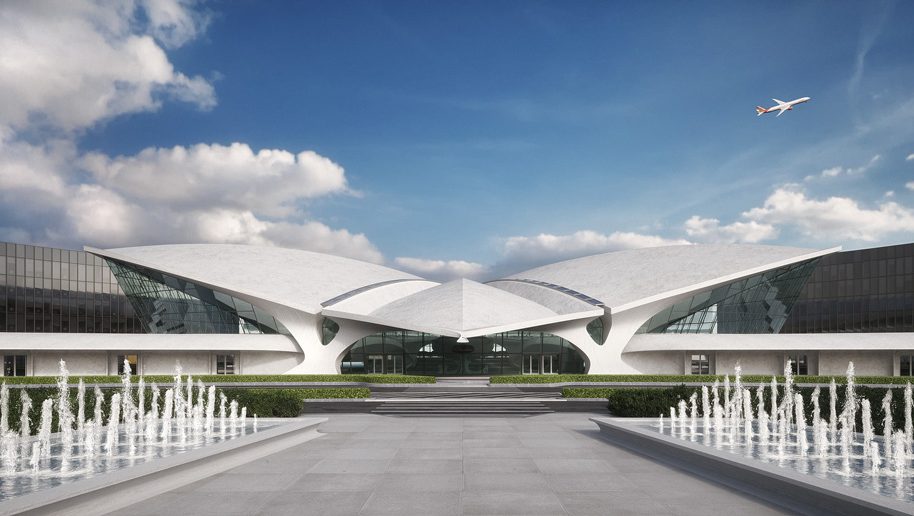 We’ve lost track of the number of years a hotel project has been rumoured / attempted for Eero Saarinen’s iconic TWA terminal at JFK airport: next year it should finally, truly, open. Simply called the TWA Hotel, it will have 505 rooms in two newly-constructed buildings on either side of the main terminal. Inside the instantly recognisable shell-shaped structure, there will be eight restaurants, six bars, and retail – the rest of the plan calls for fitness facilities, meeting spaces, a rooftop deck with pool, and museum ‘dedicated to the Jet Age, TWA, and the Midcentury Modern design movement’. 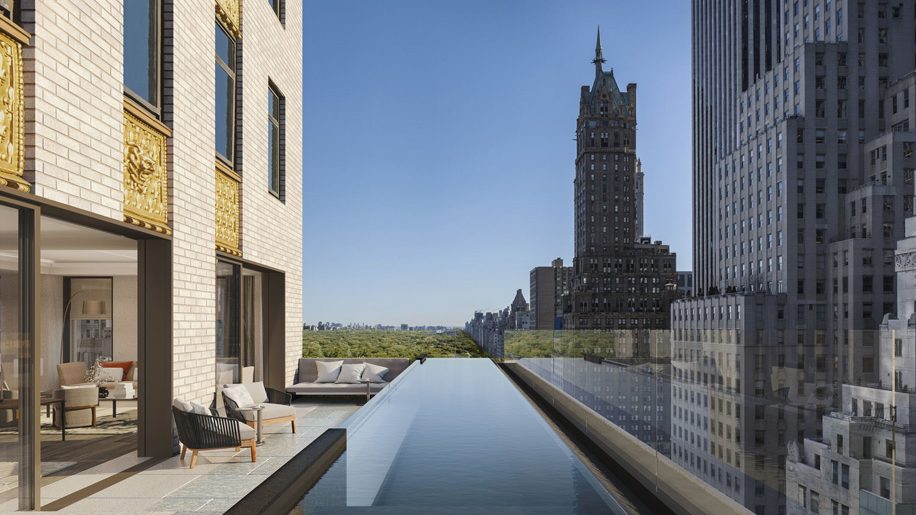 Just as the new decade starts, Aman New York is due to open inside the 1921 Crown Building on the corner of Fifth Avenue and 57th Street. It will have just 83 rooms and suites, along with a three-story spa with indoor swimming pool, an underground jazz bar, an Italian and Japanese restaurant, a piano and cigar bar, and a wraparound terrace overlooking the park. There is also the option of moving in permanently, with 20 residences for sale – including a five-story penthouse with its own indoor and outdoor pools, which would make the above view yours and yours alone.

What else is there to look forward to? Lots. We’ve been waiting for a few years now for Tony Chi to start in earnest with a floor-by-floor renovation over at The Carlyle on the Upper East Side (signature suites will maintain their individual style). If rumours are to be believed, The Plaza, which has had a fairly bumpy ride since its major redevelopment a decade ago, may go in for another renovation under new owners. 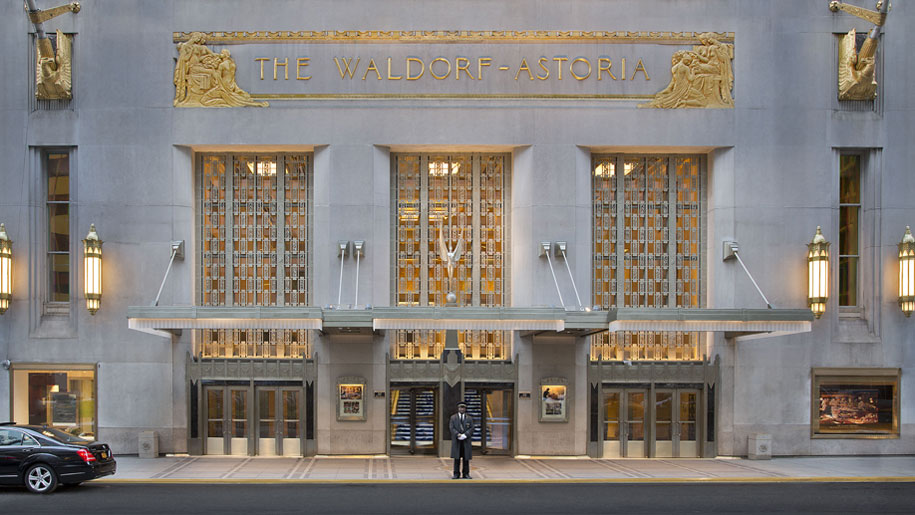 Oetker Collection, which includes hotels like The Lanesborough London and Le Bristol Paris, is working on a hotel and residences inside the Sony/AT&T building down the street. Construction has started to turn the Waldorf Astoria into a mixed hotel/condo complex, lowering room count from 1,400+ to 350. Virgin Hotels will add a New York hotel in a 39-story on Broadway and 29th Street, with 465 rooms and suites. And knowing New York, there will always be more to follow. 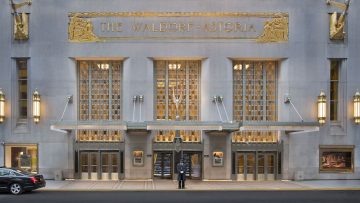