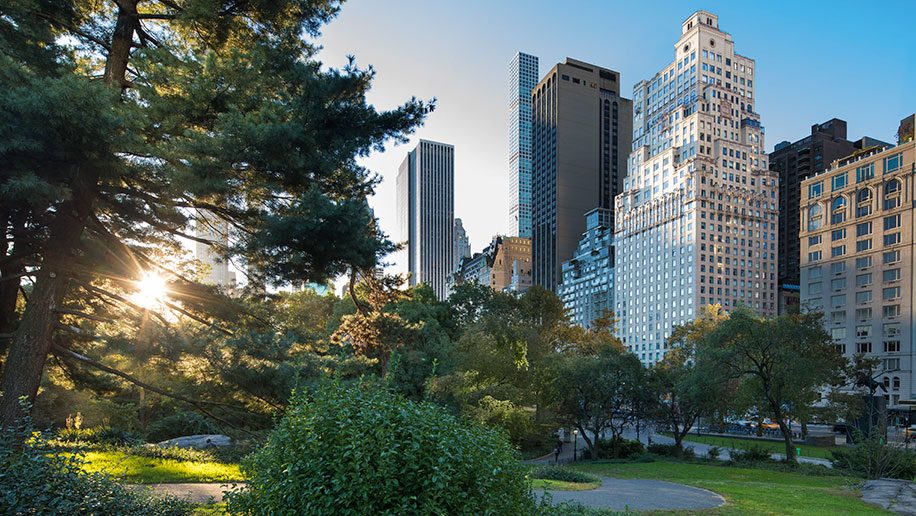 Before COVID-19 brought almost all travel to a halt, we had a look at the latest in hotel development in New York City: recent openings, renovations, and future arrivals planned for the Big Apple. Welcoming an annual combined 60 million domestic and international visitors normally, the city was on track to add 20,000 hotel rooms by the end of next year, taking total inventory close to 140,000.

The future is uncertain as New York deals with the devastating impact of the pandemic. We’re sharing the overview written at the time below, without estimates of opening dates for new arrivals, in the hope that it can perhaps provide some inspiration for when it will be possible to travel again. 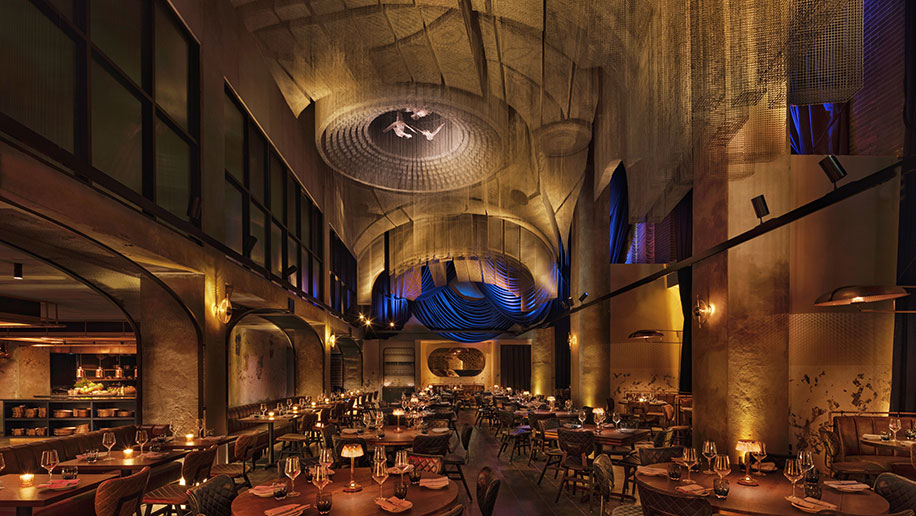 In the space of a few years, Marriott International’s millennial Moxy brand went from opening its first New York hotel in Times Square to having more than 1,200 rooms on Manhattan across three properties, with additions Downtown (298 rooms) and in Chelsea (349 rooms).

In September last year, it continued with a 286-room hotel in the East Village, each floor drawing inspiration from the surrounding area’s history. Rooms pack a lot into their footprints, and food and drink options include a rooftop bar and a French-Mediterranean restaurant. Moxy properties in the Lower East Side and Williamsburg are to follow in the next few years.

In February, Marriott also added the Renaissance Chelsea in a new 39-story tower on West 25th Street with 341 rooms and suites. On the site of a former flea market, it’s the brand’s third Manhattan hotel. Art is a major theme, with video projections in the hallways and a two-storey installation featuring more than 2,000 antique knobs, locks and keys.

Restaurant Cotto serves Italian food, while the top two floors house Somewhere Nowhere, a rooftop lounge and bar with outdoor pool. Other Marriott hotels under development in New York include a Le Meridien on Fifth Avenue. 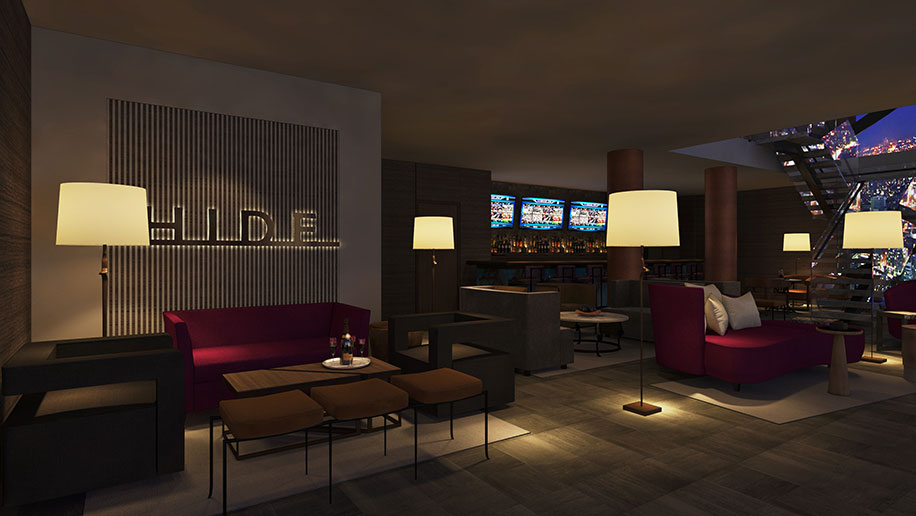 An office conversion two blocks from the World Trade Center, the Artezen opened in April last year. Its 89 rooms are decked out in a contemporary mix of greys, whites, blues and tan leather, and some have terraces. Its two-storey lounge and restaurant at the top of the building is still to come.

The TWA Hotel at JFK Airport

Last May, the 1962 Eero Saarinen-designed TWA Flight Center at JFK airport finally began its new life as part of the TWA Hotel, flanked by two new wings containing 512 rooms with mid-century furniture. The former terminal has restaurants and lounges, and the 1958 Lockheed Constellation aircraft outside houses a vintage cocktail bar. The observation deck has a pool for plane watching. 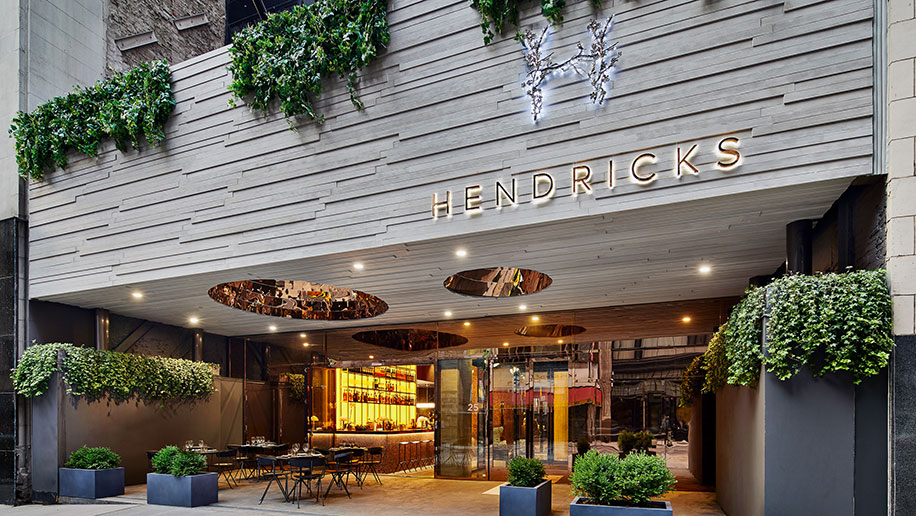 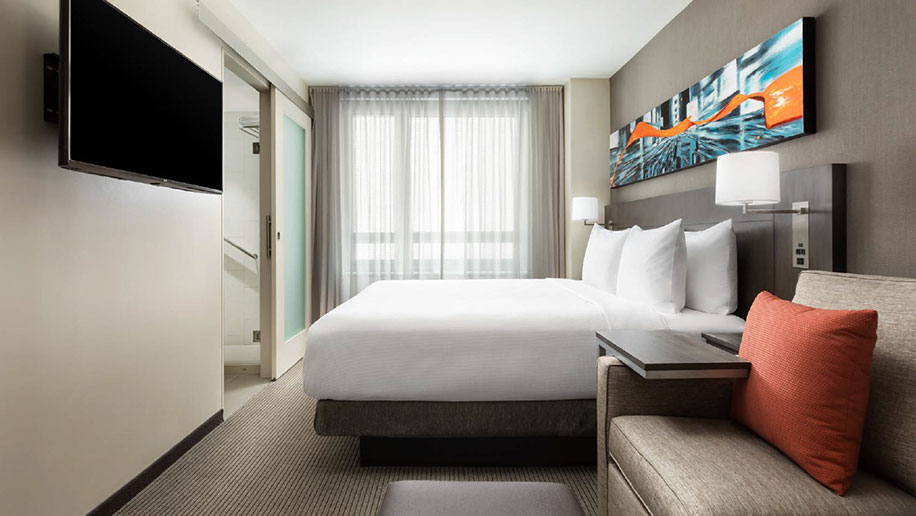 At the end of November, Hyatt cut the ribbon on Hyatt Place Times Square, its second property for its upscale select service brand on Manhattan and its largest worldwide. In addition to its 520 contemporary guestrooms, there is The Market, which offers all-day dining plus sandwiches and salads to go, the Breakfast Bar for daily hot breakfast, The Bar serving hot drinks, wines and cocktails, as well as event space and a fitness centre.

A 162-room Hyatt Centric is coming to 39th Street and Fifth Avenue, also the second property for this lifestyle brand on Manhattan. One of its six suites comes with a private balcony with views of the Empire State Building; there is also a restaurant and rooftop lounge and bar. 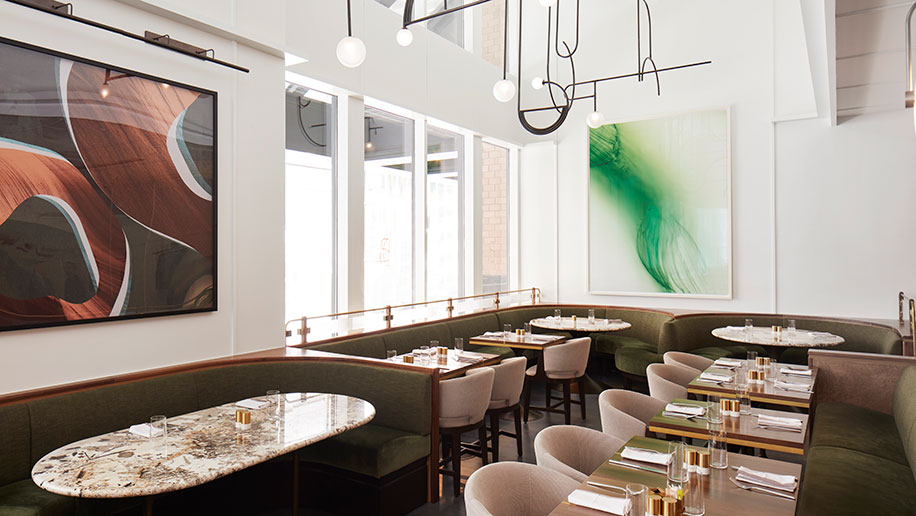 Taking over what was the London NYC, Hilton’s Conrad Hotels opened its second Manhattan property on West 54th Street in October after a full renovation. There are 562 suites in the 54-floor hotel, starting at a spacious 500 sq ft all the way through to a 3,000 sq ft two-storey penthouse. All-day dining is available at Dabble. 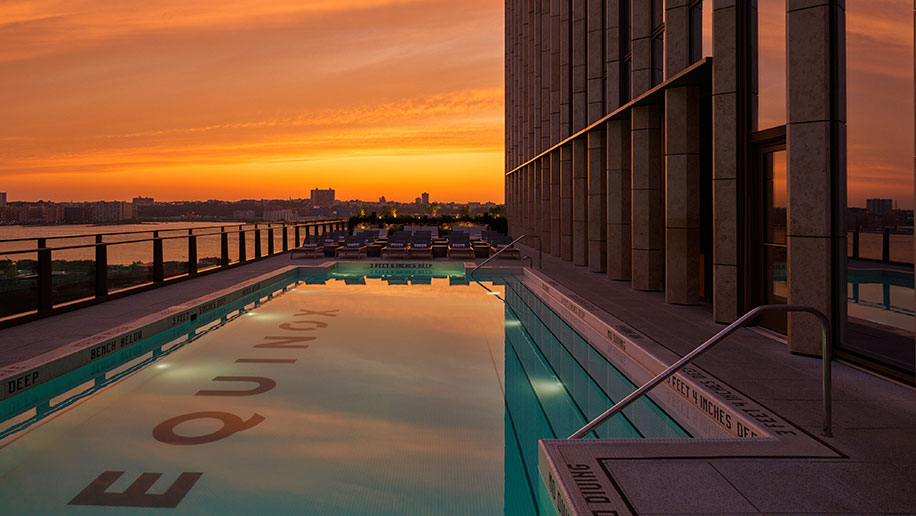 Part of Hudson Yards, the largest development in New York since the Rockefeller Center, the first hotel for this high-end fitness chain opened in July last year. The 212 rooms and 48 suites feature floor-to-ceiling windows and are designed to be “dark, cool respites” to optimise rest.

There is a 60,000 sq ft Equinox club with both indoor and outdoor pools that guests can access, as well as restaurants Electric Lemon and Broken Coconut. Equinox is also planning hotels in Chicago, Houston and Los Angeles. 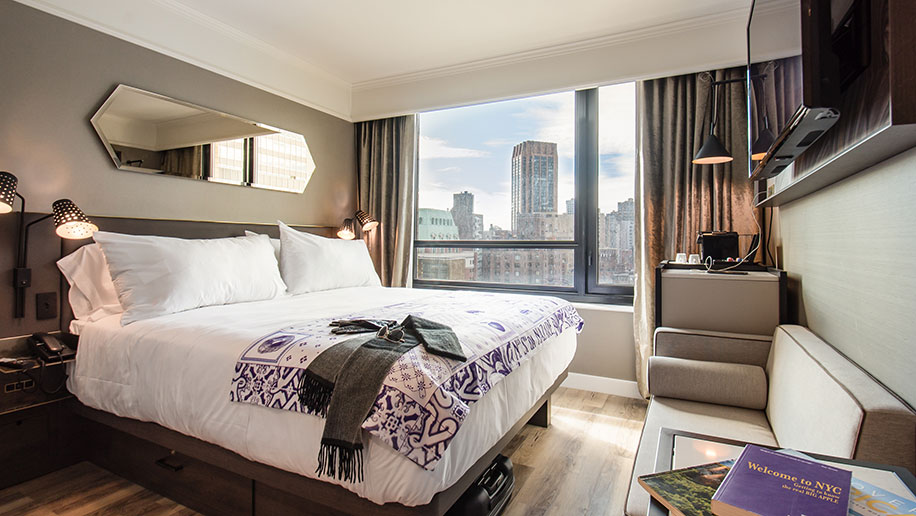 Portuguese hotel group Pestana opened its 100th property, and its first in New York, in early February. On East 39th Street, near the Empire State Building, there are 94 rooms across 27 floors, including a limited number with balconies and two junior suites. A 24-hour Grab and Go in the lobby offers healthy snacks and meals. 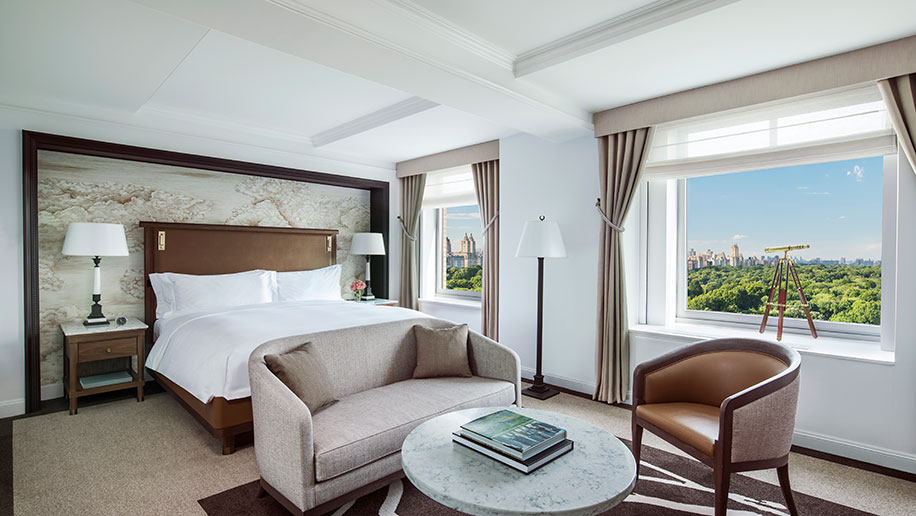 Last July, the Ritz-Carlton Central Park completed a year’s worth of renovations, tackling all rooms and suites, as well as the public spaces. An all-day “gastro lounge” now occupies the ground floor, while the mezzanine is dedicated to wellness with a fitness centre and studio.

New two-bedroom Presidential and Royal suites were added, taking the room count to 253 in total. Being right on Central Park South, many of the rooms and suites have views of the park, with in-room telescopes by the windows. 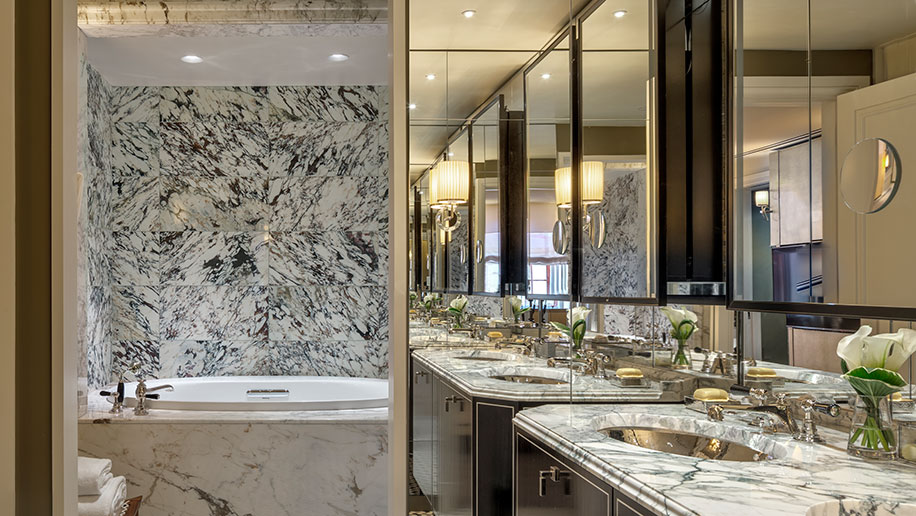 The Carlyle, a Rosewood Hotel

Towering over the corner of Madison Avenue and 76th Street on the Upper East Side, The Carlyle is in the middle of a refurbishment of its rooms and suites. Full details are yet to be released, but the Tony Chi design will offer a modern take on art deco with geometric carpets, soft golden panelling, and contrasting marble in the bathrooms. A number of suites will keep their individual designs. 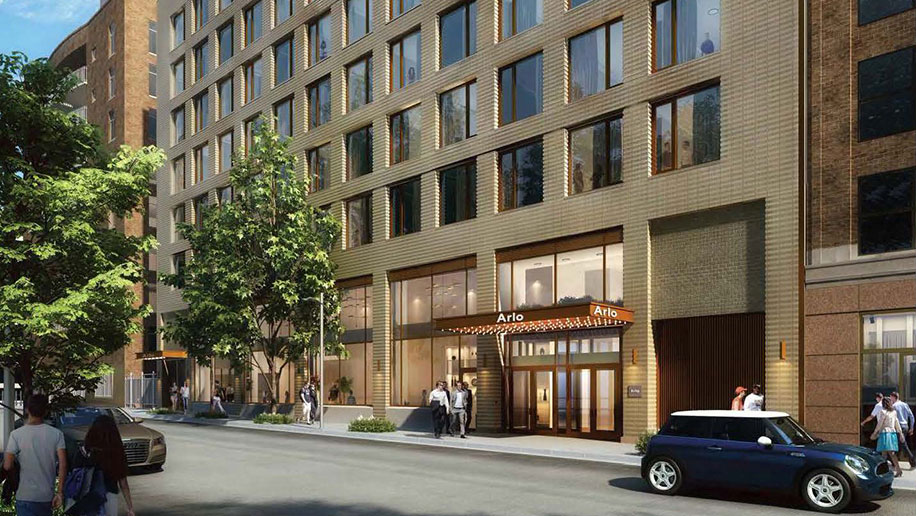 Arlo Hotels will expand its New York presence with a property on West 38th Street and 9th Avenue. It will have 489 rooms designed by Meyer Davis, taking “design cues from the natural world”. Its Midtown property is the budget-chic brand’s third on Manhattan; it is also working on a second Miami property and a hotel in Washington DC. 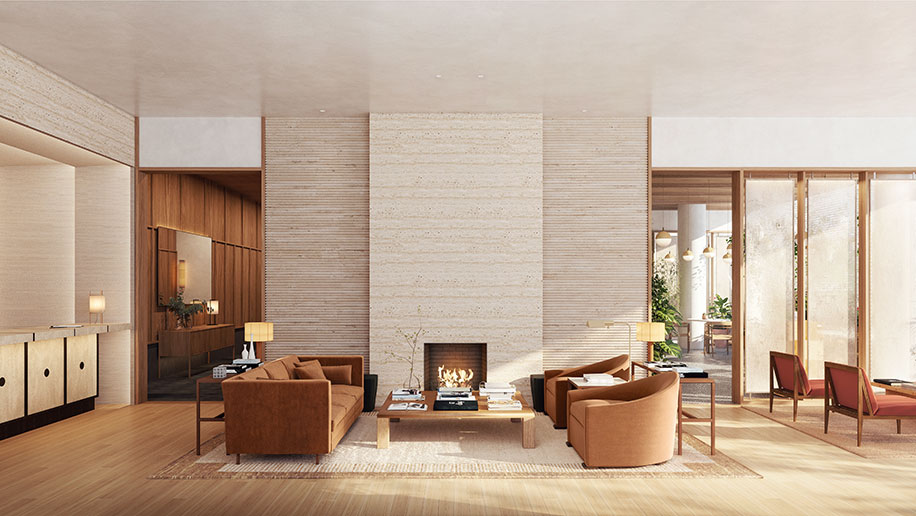 The third hotel for this luxury boutique brand is planned as part of the Manhattan West mixed-use development, in between the redeveloped Penn Station and new seven-train station at Hudson Yards. It will have 134 rooms and 30 suites, a restaurant, a lounge and an open-air terrace bar.

Set inside the twisting XI towers designed by architect Bjarke Ingels, Six Senses will add another temple to health and wellness on Manhattan’s westside, about ten blocks south of Equinox Hotel. There will be 136 rooms – dressed in neutrals and natural materials – spread across ten floors, as well as private residences.

A restaurant and café with an outdoor terrace connect to the High Line elevated park, while a 45,000 sq ft spa will have such essentials as a vibroacoustic meditation dome and magnesium pool. 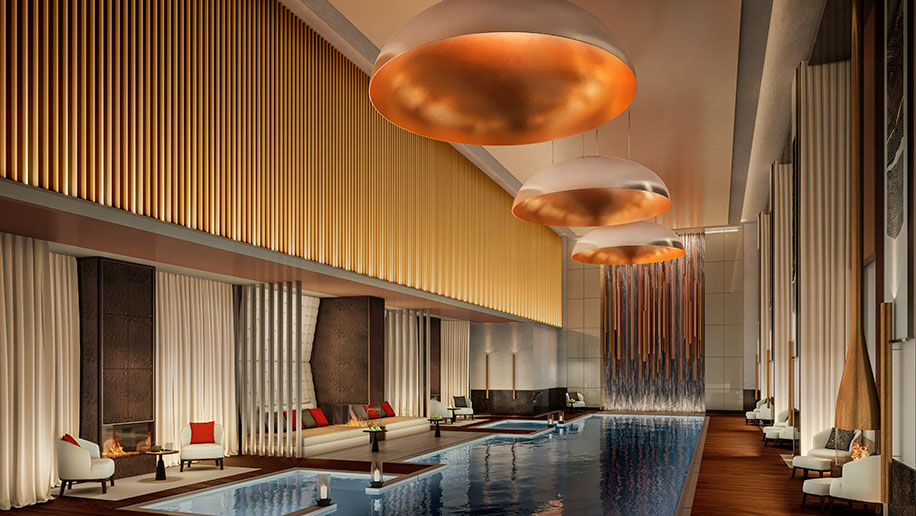 Aman New York
Aman New York will bring 83 rooms and suites – all with fireplaces – to the 1921 Crown Building on Fifth Avenue and 57th Street. Standout features will include a tenth-floor terrace with Central Park views and a three-storey spa with pool.

After launching in Chicago in 2015, Richard Branson’s Virgin Hotels went to Dallas and San Francisco, but additional properties are coming to Nashville, Las Vegas and New York. Located on 29th and Broadway in NoMad, the brand-new, glassy tower will pack in 500 rooms (or Chambers, in Virgin speak) as well as the brand’s Commons Club and a whole host of facilities. 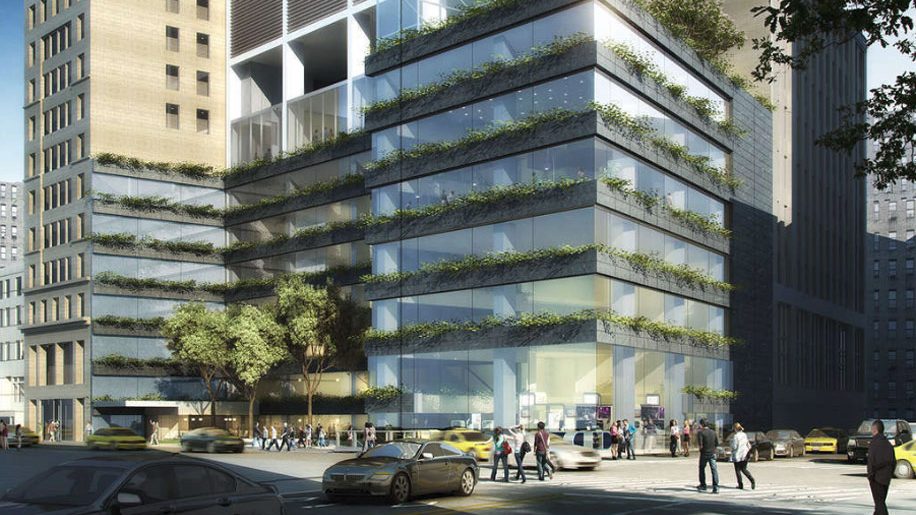 In addition to refurbishing its Central Park hotel, Ritz-Carlton is planning a 250-room NoMad hotel. Part of a US$500 million, Rafael Vinoly-designed tower, it will have interiors by Yabu Pushelberg, a signature restaurant, a Club Lounge, a spa, a rooftop bar and a public garden, as well as 16 branded residences.

Waldorf Astoria New York
After a renovation project lasting half a decade, the Waldorf Astoria is due to reopen. In addition to a full restoration of its public spaces, there will be about 350 rooms and suites – a significant reduction from before – and a similar number of private residences. 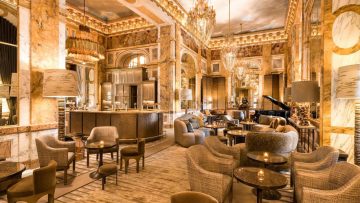