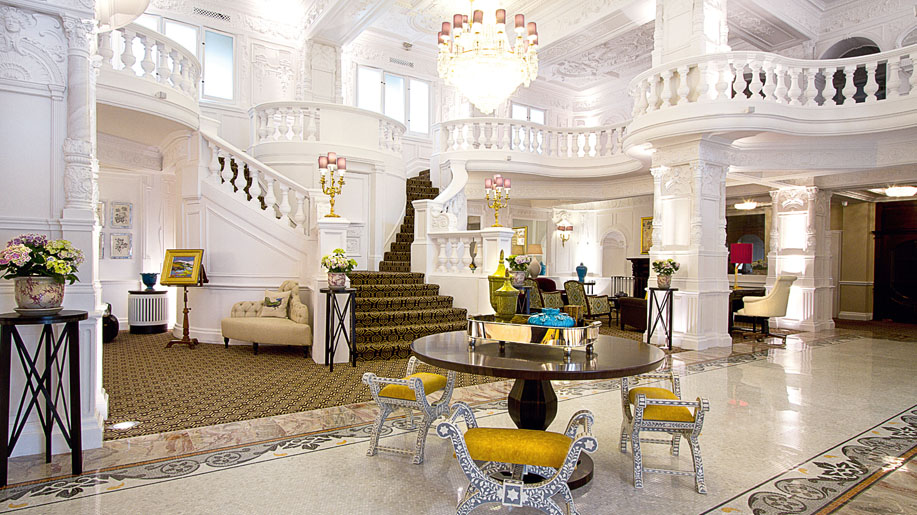 Overview: It’s easy to miss the tiny lane and leafy courtyard  that leads to St. Ermin’s Hotel. As soon as you enter the lobby of the hotel, you are instantly drawn by its gorgeous Art Nouveau and Rococo influences, replete with gleaming chandeliers and ornate wall panels.

Location: Situated at the heart of the St. James’s Park neighbourhood, and a few minutes walk from tourist attractions like Buckingham Palace and Westminster Abbey, St. Ermin’s boasts a very desirable address. The hotel itself is bathed in history, and the concierge is quick to recount anecdotes, which range from Winston Churchill’s covert meetings here to tales of secret operations conducted from an entire floor of this hotel during World War II.

Rooms: While the exterior and the public areas are characterised by a vintage chic look, given that the building was turned into a hotel in 1899, the rooms are decidedly more modern in design. I stayed in an Executive Room, with a separate sitting area, a work desk and a large bed. Noteworthy perks include high-speed WiFi, Nespresso machine and a smart TV.

Eat & Drink: Breakfast is best enjoyed in a laid-back fashion at the hotel’s signature eatery, The Caxton Grill, with its cosy, old-English vibe. It also serves up English classic dishes at lunch and dinner. Along the lobby, and overlooking the courtyard, the Caxton Bar is where you can settle down for a quick cocktail or nightcap, before retiring to your room.

Meetings: St. Ermin’s is well-equipped to host meetings and events, which can be hosted in one of its 14 meeting spaces, of different sizes, the largest one — the Crystal Ballroom — being able to accommodate up to 200 people.

Why we love it: Interestingly, the hotel is home to 3,00,000 Buckfast bees, which reside in a separate enclosure on the third floor, with a viewing gallery for guests. 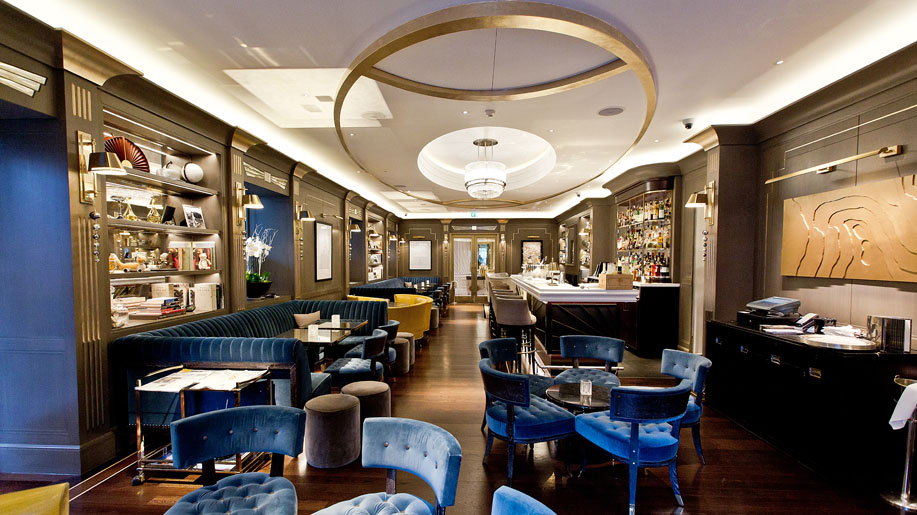 Overview: As its name suggests, Sir Winston Churchill’s gleaming legacy is a motif that runs throughout this luxury hotel. As soon as
you enter the buzzing lobby of Hyatt Regency London – The Churchill, you will appreciate the understated elegance of the space, with its resolutely British aesthetic. Throughout the spaces in the hotel, you will spot pictures and pieces of art as references to the life of the British politician.

Location: Overlooking the lush green Portman Square, the hotel is situated at the very heart of the Marylebone district. A few metres away is the main shopping thoroughfare of Oxford Street.

Rooms: The hotel houses 440 rooms, spread across different categories. Subtle pastels and wood characterise the elegant decor of the rooms, with their “Churchill” vibe. Rooms are spacious and well-equipped — fast wifi, large TV, tea coffee corner, spacious bathroom packed with amenities and a separate worktop. The rooms are also extremely family-friendly, making this hotel perfect for a family vacation to London.

Eat & Drink: Stop for a meal at the hotel’s signature restaurant The Montagu, which has an open kitchen where you will watch the chefs cook up your meal in the open kitchen. The menu is British-inspired, and features some dishes from Chartwell, where Winston Churchill had his country home.

Meetings: This hotel has 11 different spaces to host meetings, conferences and even weddings. The largest space, Chartwell Suites, spreads across 242 sqm, and can accommodate up to 350 people.

Why we love it: The unforgettable gin and tonics that we enjoyed at The Churchill Bar & Terrace are worth a mention. The bar has its in-house gin, Churchill Craft Gin, which is a must-try. Step onto the nautical-inspired terrace for a cocktail — or a cigar — and click a selfie with the life-size statue of Sir Winston Churchill. 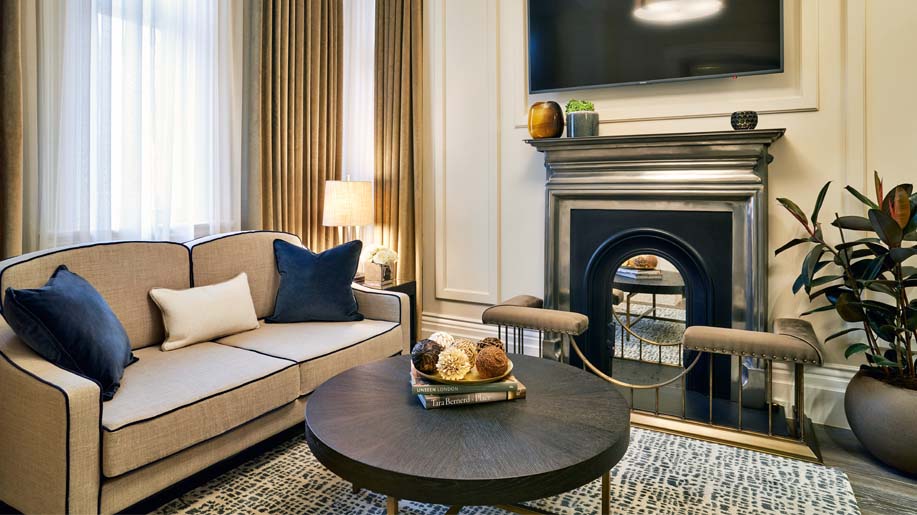 Overview: Dating back to 1898, when this building first opened its doors as the Frederick Hotels Company, Principal London made the news this spring when it reopened after a massive refurbishment exercise. Situated in the trendy “literary” Russell Square, this 334-key hotel’s building towers over the neighbourhood with its unmistakable “milk tea” terracotta facade. Today, this Grade II listed heritage building retains its lavish appeal and its decor is effortlessly infused with modern art and quirky accents.

Location: The hotel is located on the eastern edge of Russell Square, at the heart of a buzzing neighbourhood, which is home to trendy cafes, boutiques and bars.

Rooms: The hotel caters to both business and leisure travellers through its 334 rooms and suites. The former will find the City Single (single bed) rooms most suitable, all the way up to the Corner Suites, which boast spectacular amenities, a fireplace, complimentary minibar, four-poster beds and arresting views of the neighbourhood.

Eat & Drink: We enjoyed a scrumptious lunch at Neptune, which features a seafood-heavy menu, in an opulent setting. The focus is on locally-sourced seafood and its oyster bar is among the best in the city. In the morning, don’t forget to grab a coffee to-go from Principal’s Victorian-style gourmet coffee house Burr & Co.

Meetings: Most noteworthy is the grandiose ballroom, which can accommodate up to 450 people, in addition to the eight meeting and events spaces, with capacities ranging from six to 90 people.

Why we love it: With its opulent decor and time-tested heritage, the Principal London is an architectural landmark, and a great new addition to London’s luxury list. 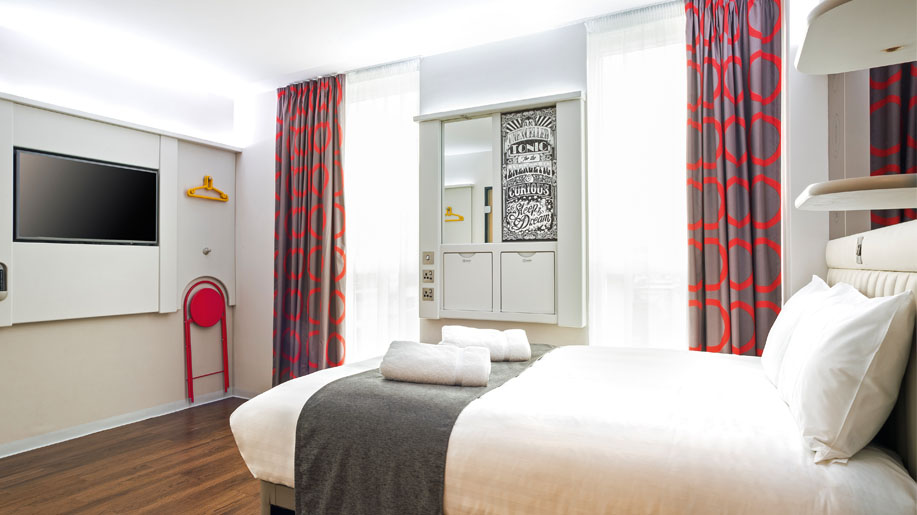 Overview: One of the most unique hotels we’ve visited in recent times, Point A is all about functionality and providing a simple, fuss-free experience, packed into a small room, maximising the use of space everywhere. Moreover, the overall look and feel of the hotel is hip, young and cheerful, suited perfectly to a budget-conscious business traveller.

Location: Point A is situated on Paul Street, a tiny lane in the Shoreditch neighbourhood. The area around the hotel has a hipster-chic vibe to it and is brimming with trendy bars, cafes and restaurants. The Old Street tube station is a short walk away.

Rooms: My room at Point A is enough to evoke mixed reactions from many. However, I found it to be perfectly suitable, albeit undeniably tiny, equipped with all the basics — plush bed, 40-inch TV, mood lighting, lots of charging stations and a well-equipped, if tiny, bathroom. The smartly designed rooms see a work table that folds into the wall, a chair that hangs from a wall, to save space, and you are advised to slip your suitcase under the bed. Other perks include high-speed wifi and air conditioning.

Eat & Drink: We absolutely loved the informal breakfast area just off the lobby, with its working stations and individual pods. Most of the breakfast items are presented in a grab-and-go format and the coffee is great.

Meetings: You can host one or two people in the individual pods or work stations in the breakfast area.

Why we love it: This hotel is easy on the pocket, has a feel-good vibe and offers all the basic creature comforts. The trendy neighbourhood is a big bonus. 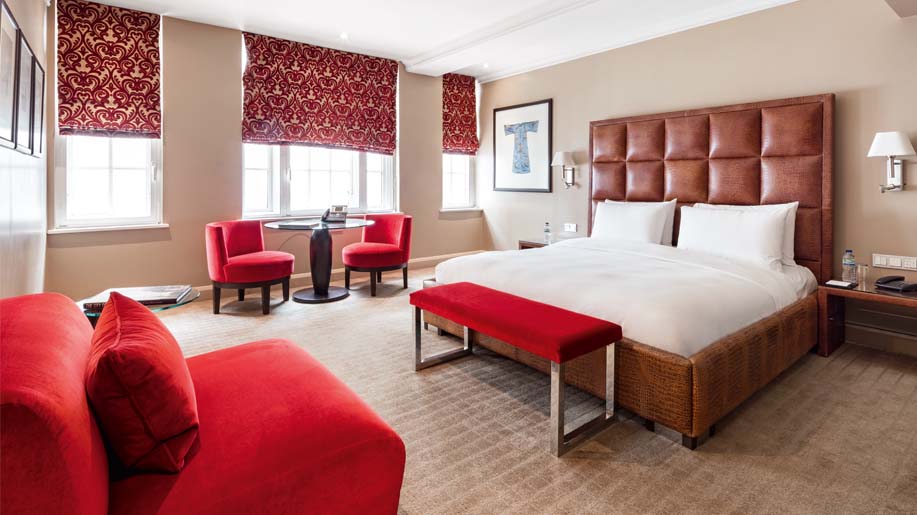 The May Fair Hotel

Overview: Since its opening in 1927, The May Fair’s list of patrons has read like a who’s who of the international jet set. Celebrities, royals and socialites have constantly frequented this prestigious address, characterised by its elegant decor and stately rooms. In 2004, following a massive refurbishment costing £75 million, the renewed May Fair later announced itself as the official hotel to London Fashion Week and the British Film Institute. Today, the hotel boasts a perennial buzz thanks to its well-frequented restaurants, bar and events spaces.

Location: As its name suggests, The May Fair hotel is situated in the upscale Mayfair precinct, just off Piccadilly, and a stone’s throw from the city’s most fashionable thoroughfares — Bond Street, New Bond Street and Saville Row.

Rooms: The hotel boasts 400 rooms, of which 37 are suites. At the top end of the spectrum is the highly sought-after two-bedroom Penthouse Suite, one of London’s best, spread across 200 sqm, with its massive sweeping balcony. Other perks include a fireplace, a lounge area, dressing room and a rain shower.

Eat & Drink: Don’t forget to enjoy the Mediterranean-inspired menu for lunch or dinner at the May Fair Kitchen, the hotel’s all-day dining option, with its massive breakfast spread. Or head on over to the May Fair Bar for a flute of champagne, a cocktail along with some people spotting.

Meetings: This hotel is our “MICE pick” because it boasts a number of meeting and conference spaces — notably, the Crystal Room, which can accommodate up to 260 delegates. In addition, the hotel offers other spaces such as a private dining area and a series of well-equipped meeting rooms, which can be configured in different layouts. As its name suggests, The Atrium is a large cavernous event space, bathed in natural light, thanks to the sunroof, which can host cocktails and events.

Why we love it: The May Fair Hotel has one of the British capital’s largest private theatres. The theatre seats 201, in plush leather upholstered armchairs, and can host private screenings or even conferences. 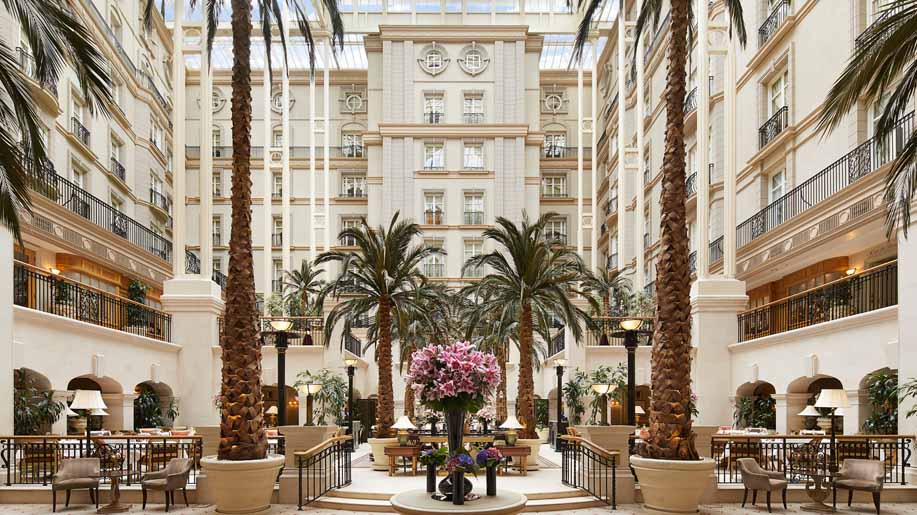 Overview: With a rich history that dates back to 1889,  the gorgeous Victorian façade of The Landmark London teleports you to the bygone days of the British capital. Interestingly, the person who built this structure (then called the Grand Central Hotel) also was the force behind the Marylebone station, which sits right across the hotel. Once inside, the guests are transported back to the 21st century, where they experience all the elements of modern luxury. There is a 15-metre chlorine-free heated swimming pool and a range of spa services too!

LocatioN:The Marylebone station makes it easy for a business traveller to take a tube, which connects the Bakerloo Line and other services to the West Midlands. Attractions such as The British Museum and  Buckingham Palace are just three miles away. You are recommended to visit the nearby Aflies Antique Market that stocks fashion and 20th-century design products.

Rooms: All 300 rooms including 51 luxurious suites at the hotel offer generous space, allowing guests to unwind and relax. I stayed at an executive room on the second floor, overlooking the beautiful Winter Garden restaurant. It gave me a tropical vibe with elements like wooden furniture, elephant-print cushions, vibrant carpets and mild-coloured walls surrounding me. The large bathrooms in white Italian marble, are divided into three sections — closet, walk-in shower, and a separate washroom. The bathrooms are equipped with The White Company toiletries.

Eat & Drink: The F&B options are plentiful. At the heart of the hotel lies the tropical-styled  Winter Garden restaurant that offers delicious European dishes, tasty desserts and healthy breakfast options. Must try offerings are a roasted breast of maize fed chicken with savoy cabbage, chick peas, chorizo and smoked paprika and for vegetarians, there is risotto of mushrooms that is a healthy blend of spinach, parmesan and pine nuts. Head to the TwoTwentyTwo Restaurant and Bar (named after the hotel’s 222 Marylebone Road address) for a lively evening. Guests can enjoy the signature Marylebone Mist and other pre-dinner cocktails at the hotel’s chic The Mirror Bar.

Meetings: The property offers 11 conference and banquet spaces that can accomodate up to 750 guests. The majestic Grand Ballroom and Empire Room feature elegant wood panelling, intricate ceiling design and mood lighting options. The hotel is also a preferred venue for corporates.

Why we love it: The Landmark London’s victorian exterior and modern interiors make it an insta-worthy property. Additionally, it caters to both- business as well as leisure travellers. No surprise, then, that the hotel finds itself in the prestigious The Leading Hotels of the World banner. 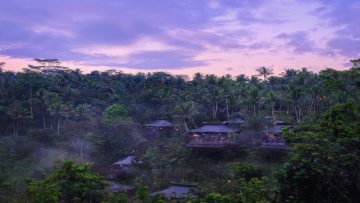 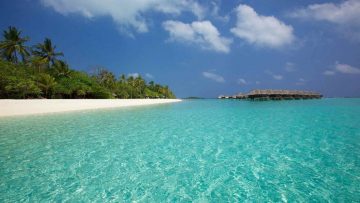 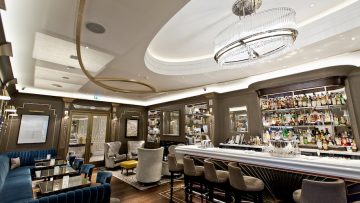