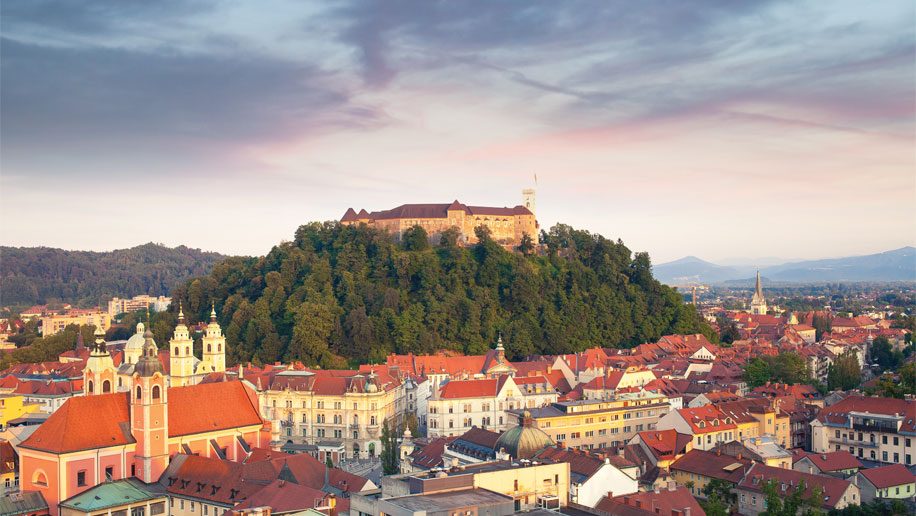 Behind its picture-perfect looks, Ljubljana has big ambitions to be a European tech hub

It is said that if Prague and Vienna had a baby, Ljubljana would be the result – but that there would be an Italian lover in the mix. From above, the capital is a mosaic of terracotta Baroque and peppermint Art Nouveau rooftops, separated by the Ljubljanica river and the tree-covered hill beneath the city’s medieval castle.

Down at ground level, a laid-back buzz emanates from the riverbank cafés and bars as people take their cappuccino al fresco, all year round. There’s not a Starbucks to be found. “We prefer to sit down, rather than run to the office with our coffee,” says Jan Orsic, head of the Ljubljana Convention Bureau. “That’s how we do business. It’s about having a balance between quality of life and international recognition.”

The more you learn about Slovenia, the more you want to know. More than 60 per cent of it is covered in forest. Its mountainous landscape, lime-hued hills blooming with wildflowers, and mesmeric blue lakes have spawned a nation of outdoor lovers with a close connection to nature. Some 90,000 of its two million citizens are beekeepers.

What’s more, Ljubljana recycles the highest percentage of waste of any city in the world (despite popular belief that it’s Copenhagen) and was named European Green Capital in 2016, which rewards “local efforts to improve the environment, economy and quality of life in cities”.

The Slovenian capital’s mish-mash of cultural influences and its compact size make it agile when it comes to business. “While Ljubljana may not be the biggest capital of Europe [with a population of 300,000], it is a city of human scale, so logistics are easy,” Orsic says. “[There’s also] the education of the population. Most Slovenians speak at least one foreign language – on average, we speak three or four. And we have an understanding of a Germanic mentality when it comes to business – we like things to be nice and orderly. [There is] a high level of professionalism, yet a human scale.”

Bordered by Croatia, Hungary, Austria and Italy, you could drive from the Slovenian capital one morning and be in Venice, Graz, Zagreb or Budapest by lunchtime. The country’s accessibility by land and its outward-looking approach have paved the way for an export-orientated economy. Car manufacturing is a particularly powerful area of industry, and Slovenia supplies parts to almost every car maker in Europe.

The production hubs of Maribor (Slovenia’s second city, close to the Austrian border) and Novo Mesto (near the Croatian border) are within easy reach of Ljubljana, and, from an international perspective, they’re viewed as an extension of the capital. Most major car companies – including Renault, Citroen, Audi, BMW, Ford and Land Rover – have operations in Slovenia.

The nation’s automotive roots have laid the foundations for a promising robotics industry – some of the world’s biggest robotics producers, including Kuka, ABB, Yaskawa and Fanuc, have opened factories and innovation hubs here. National corporations such as energy company Petrol and retailer Mercator are enjoying regional success, while pharmaceutical firm Krka is a huge player in the Eastern European and Russian markets. 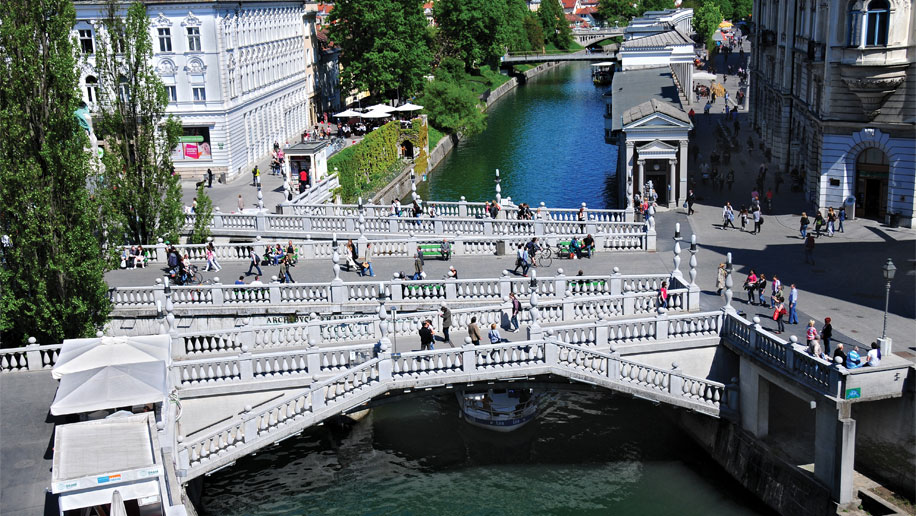 Aside from this, Ljubljana’s start-up scene is thriving. Areas such as environmental tech, entertainment and logistics-related software are proving to be prominent focuses, and its Technology Park is home to more than 300 fledgling companies. Once again, the city’s small size brings advantages in terms of boosting collaboration.

Slovenia also tends to be an early adopter – for example, in its ambitions to become a global leader in the blockchain realm. Last year, Ljubljana hosted the first European Blockchain Summit. Government representatives and blockchain businesses flew in from around the world to discuss regulations surrounding the technology, which has been coined a pillar of the Fourth Industrial Revolution thanks to its ability to digitise the world’s assets, automate official agreements and make industrial processes more transparent. At this point in time, blockchain’s most tangible use is to power cryptocurrencies such as bitcoin, but this is just the tip of the iceberg.

Hop on a bus from the city centre and head 3km to the northeast, and the cobbled streets and neoclassical façades quickly give way to a suburban landscape of roundabouts and squat, glassy buildings. This is where you’ll find BTC, the world’s first “bitcoin city”. Plastered with billboard adverts and dotted with neon signage, the innovative entertainment complex is home to 70 bars and restaurants and 450 shops and attractions – including a waterpark, a cinema, a theatre and a concert hall. Customers can pay for everything with cryptocurrency (which works via blockchain technology). There’s also a market selling flowers, meat, fruit and vegetables, and a street food market.

“[BTC] almost acts as a city within the city, a retail complex that has transformed itself beyond traditional shopping and created a living test lab for start-up ideas and new technologies,” says Mladen Ljubisic, chief operating officer of Ljubljana-based startup 505VR, a virtual reality solutions provider (see panel, right). “Slovenia has positioned itself as a blockchain hub, implementing and accepting crypto industry in real-life application, not just as a buzzword.” As nations around the world scramble to lead the way in creating legal frameworks and precedents for a global blockchain economy, Slovenia’s early advantage will place it in good stead.

Being a frontrunner in an industry tied to social responsibility and accountability (blockchain makes it hard for businesses to hide unsavoury details about their transactions of supply chain) makes sense given Slovenia’s eco-consciousness. So far, it has been exploring ways to use blockchain to develop its tourism offering sustainably; to remain a “boutique travel destination”, while other European cities struggle from the impact of overtourism. For example, this year, the Slovenian Tourist Board will start trialling a blockchain system that actively encourages sustainable travel.

The first of its kind for a tourist board, the intention is to create tech that “rewards good behaviour” from agents and travellers who book more eco-friendly, off-the-beaten-track options by automatically giving them discounts and offers. 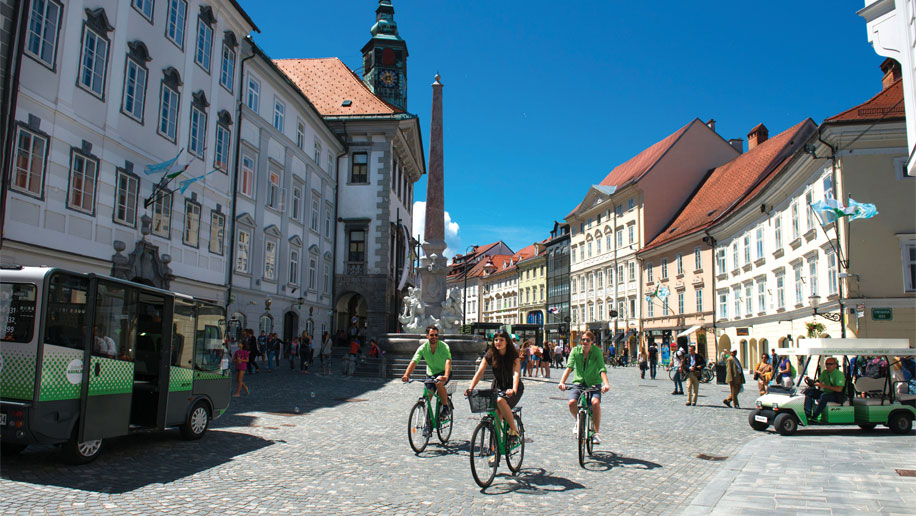 For 2019, Slovenia’s GDP growth is forecast at 3.4 per cent – higher than the eurozone average of 1.3 per cent. What it needs now is better flight connectivity. Ljubljana airport’s limited capacity (3,000 passengers per day) is holding it back. “A handicap is that Ljubljana is within a two-hour drive of several international airports,” Orsic says. “So Ljubljana is now trying to catch up. The purchasing power of Slovenians is quite high – even though we’re a small country, we travel a lot. And we’re seeing new airlines arriving – there is a lot of interest.”

A major boost will be the new terminal planned for Slovenia’s gateway airport. Scheduled for completion in 2021 – when the country will hold the EU presidency – the facility will double the airport’s current capacity.

Easyjet flies to Ljubljana four times a week from London Stansted and Gatwick. In July, British Airways will begin a twice-weekly seasonal service from Heathrow to Ljubljana, to run until September 2.

More accommodation for business travellers is also on the way. Currently, the city has only one five-star hotel, the Intercontinental Ljubljana, which has 165 rooms, meeting space, a spa and a rooftop bar and restaurant. “We have several four-star superior hotels that could go into [the five-star bracket] but they don’t want to in quite a few cases because they’re focusing on meetings and events and, when it comes to pharmaceutical and medical events, the by-laws and regulations are quite strict about delegates staying in five-star hotels,” Orsic says.

Other international brands in the city include Radisson Blu and Four Points by Sheraton, the latter of which is gaining an extra 120 rooms as part of a revamp. Two new hotels are coming over the next couple of years – a 300-room property opposite the Intercontinental and a 150-room hotel on Congress Square. The latter will be managed by a global chain, although no details are available yet.

Speaking of congress centres, despite its small size, Ljubljana has two of them. Both of these are being invested in heavily, and the GR Ljubljana Exhibition and Convention Centre is set to gain a new conference hall for 3,000 people.

Ljubljana is full of pleasant surprises. Its hodgepodge of Mediterranean, Austrian and Hungarian influences is reflected in its distinctive cuisine, where zlikrofi (ravioli), sausages and goulash can be found on the same menu – don’t leave without trying burek (a satisfying pizza-pasty hybrid, chased down with yoghurt).

Its relaxed vibe and green spaces, such as the chestnut tree-lined Tivoli Park, create a peaceful atmosphere, while the eye-catching cityscape – dotted with classical flourishes by 1920s architectural mastermind Joze Plecnik, who wanted to model the city on ancient Athens – reflects an individual, innovative streak.

All the same, the capital is not one to blow its own trumpet. Instead, it plays to its strengths, works well with others and quietly cultivates an atmosphere of innovation based on its principles of sustainability, sincerity and creative thinking. And it seems to be paying off.

“We are being recognised within the international environment for what we’re doing – it’s just sometimes about getting the message across,” Orsic says.

“For many, Slovenia is not on their bucket list. But that’s not the worst thing. We’re not New York or London and we never will be. But we try to write our own story.”

Pipistrel A world leader in building electric light aircraft, Pipistrel’s first two-seater took flight last year in Norway – a market that will potentially make a big investment in the jets (the country aims to have all domestic flights operated by electric jets by 2040). The company offers the widest range of electric light planes in the world, and plans to release more models this year. pipistrel-aircraft.com

Origin Trail Using blockchain technology, Origin Trail shares data about global supply chains across a range of industries – including tracing supermarket food products back to their farm of origin, simply by typing in their barcode. The aim is to boost compliance, to increase transparency for consumers and to help companies improve the efficiency of these processes. origintrail.io

505VR Ljubljana start-ups are making huge ground with augmented reality (AR), virtual reality (VR) and mixed reality (MR). For example, 505VR is developing a new AR concept called Time Tourist, in which old photographs of a city or area will be used to create an immersive 3D experience. It will launch in Ljubljana this year, so tourists can compare the capital “then and now”. 505vr.com

Outfit7 One of the fastest-growing multinational companies creating family entertainment, Outfit7 sold its Talking Tom app for a cool €1 billion in 2017. The mobile app for children is a virtual pet (kind of like a modern-day Tamagotchi) and has been downloaded more than 5.6 billion times worldwide. talkingtomandfriends.com

Loading comments...
Read Next
Northern India: Linger in Lucknow
Read Previous
Smart traveller: How to get from Paris CDG and Orly to the city centre