Key learnings from the Future Hospitality Summit 2022 in Dubai 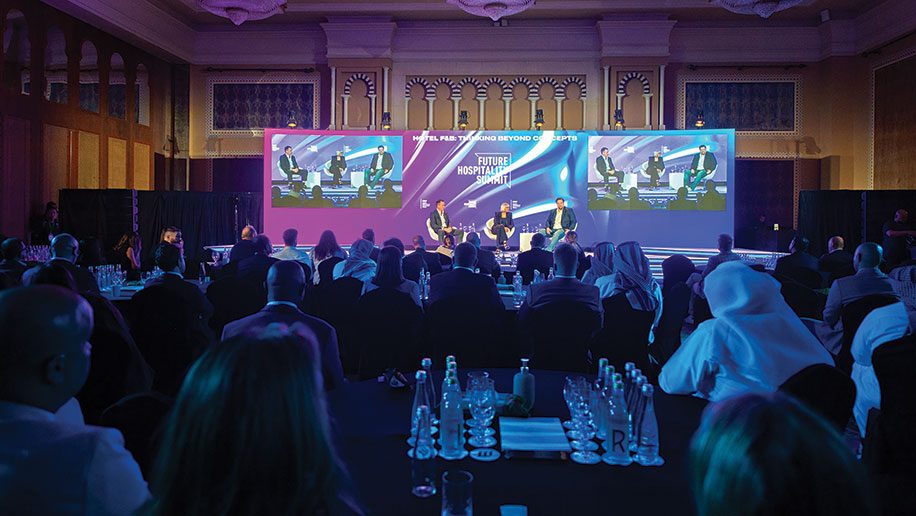 The Future Hospitality Summit (FHS) in Dubai recently concluded, but after having assembled the region’s A-list of hospitality stalwarts and brands – many of whom chose the event as a platform to announce the signing of deals worth millions of dollars.

Held from September 19-21 at the Madinat Jumeirah, FHS Dubai was hosted by Jumeirah Hotels and Resorts, and co-organised by MEED and The Bench. The event combined the Arabian Hotel Investment Conference (AHIC), African Hospitality Investment Forum (AHIF) and Global Restaurant Investment Forum (GRIF). Ultimately, there were over 1,072 attendees who gathered to listen to what some of the 200 speakers had to say about the roadmap for the industry.

The theme for the event was Lead The Change and staying true to it, apart from giving the speakers a platform, several delegates were also invited to speak for up to three minutes about how they were personally and professionally leading the change.

Just ahead of the FHS, Knight Frank along with analytics and marketplace insights provider for the hospitality industry, STR, released research figures which suggested that the Middle East’s travel and tourism sector will likely witness more than 100 million tourist arrivals and over US$270 billion in revenue this year, putting it firmly on the path of attracting 160 million tourists by 2030.

It’s those same levels of buoyant optimism that Jonathan Worsley (pictured left), chairman of The Bench, observed universally among the delegates and speakers who were present at the event. “The bounce back that we’ve seen has been surprising. What really thrills me is the way we’ve adapted this event from not just being about investment, but also being about the future. Hence the rebranding of the event to the Future Hospitality Summit, of which AHIC and GRIF fall underneath. We’re embracing the idea of looking at the future and bringing in startups, having competitions, getting delegates to participate and providing a platform for innovation.”

According to the Knight Frank report, there are over 600,000 hotel rooms that are in the planning and development stage in the Middle East. At the FHS Dubai, regional and international brands announced their expansion plans for the Middle East. Rotana said at the FHS that it will open two properties in Dubai under its new Edge brand – the 328-room Arabian Park Hotel and the 295-key Damac Hills 2 Hotel. Radisson – Elie Younes, its executive vice president and chief global development officer as well as Elie Milky, vice president of Development were panelists at the event – confirmed a portfolio of 77 hotels in operation and under development across the Middle East. It added that it has a portfolio goal of reaching 150 properties and 30,000 keys in the region by 2030.

Likewise, Hilton said that it is aiming for a staggering 140 per cent growth – there are approximately 100 properties in the pipeline – in its Middle East portfolio over the next three-five years. It recently opened its 608-key Hilton Dubai Palm Jumeirah property in the UAE, a Waldorf Astoria in Kuwait, and a DoubleTree by Hilton Riyadh Financial District in Saudi Arabia.

At the FHS, the growth of Saudi Arabia and its potential as a tourism destination was a topic of discussion revisited by several speakers. Earlier this year, the FHS Riyadh which was held in May 2022 was completely sold out. “It’s terribly exciting as [Saudi’s] economy changes to a multifaceted economy with tourism as one of its pillars. I love what they’re trying to do on the sustainability and human resources front. At the FHS in Riyadh earlier this year we had to stop registrations, which I’ve never done before. We had to put the emergency brake on because we couldn’t fit any more people into the venue at the Riyadh Airport Marriott Hotel where we were hosted by Dur Hospitality,” revealed Worsley.

The FHS is known to be a platform where mega deals are announced and at the Dubai edition, the Abu Dhabi Securities Exchange-listed Abu Dhabi National Hotels confirmed that it had acquired a prime plot on Al Marjan Island in Ras Al Khaimah to develop a US$272 million resort property. Ras Al Khaimah featured prominently at the FHS with Chris Gordon, president of Wynn Development, and Abdullah AlAbdouli, chief executive officer of Marjan, joining Alison Grinnell, chief executive officer for RAK Hospitality Holdings, in a panel discussion on day two titled ‘Integrated Resorts and Their Impact on the Economy.’ It was here that it was revealed that the multi-billion dollar Wynn Resorts in Ras Al Khaimah is expected to open by the end of 2026.

Apart from the Middle East, there were panel discussions such as ‘Focus on China – Are you prepared for the Biggest Tourism Market?’ and ‘An overview of travel and tourism potential in Africa’ which discussed markets that the Middle East could play a vital role in growing.

The third and final day of the FHS saw Sheikh Ahmed bin Saeed Al Maktoum, founding patron of AHIC; president of Dubai Civil Aviation Authority; chairman, Dubai Airports; chairman and chief executive, Emirates Airline and Group; and chairman of Dubai Holding take to the stage for the FHS 2022 Awards presentation. The Lifetime Award for Services to the Industry was awarded to the late Ranjan Nadarajah who worked for over 35 years as the general manager at Le Méridien Dubai Hotel and Conference Centre and was also a senior advisor to Wasl Hospitality. Assia Riccio, founder and CEO of Evolvin’ Women, won the Be The Change Award for her support of unemployed women from under-privileged backgrounds and female farmers in developing countries, while Amit Nayak, vice president of the Hospitality Asset Managers Association (HAMA) Middle East and Africa, received the Leadership Award in a nod to his over two-decade career in asset management and private equity within the region.

There’s more coming up from the team behind the FHS. The Africa Hospitality Investment Forum (AHIF) in Morocco will take place from November 2-4, 2022, while dates and a confirmation of next year’s edition of the FHS are all expected imminently.