How sustainable is Etihad? 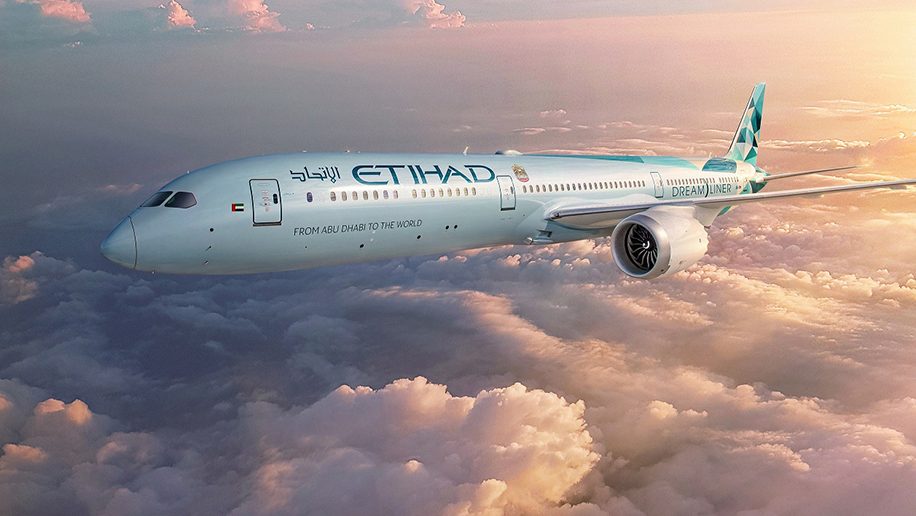 The report details the airline’s sustainability efforts, though it builds on work which has taken place over several years.

“Etihad has no delusions about the severity of the climate crisis. Nor misconceptions of the contribution the aviation industry has and will continue to have.”

Its Sustainability Report lays out how it aims to get to its 2035 and 2050 targets, but is also refreshingly honest about the challenges it faces. 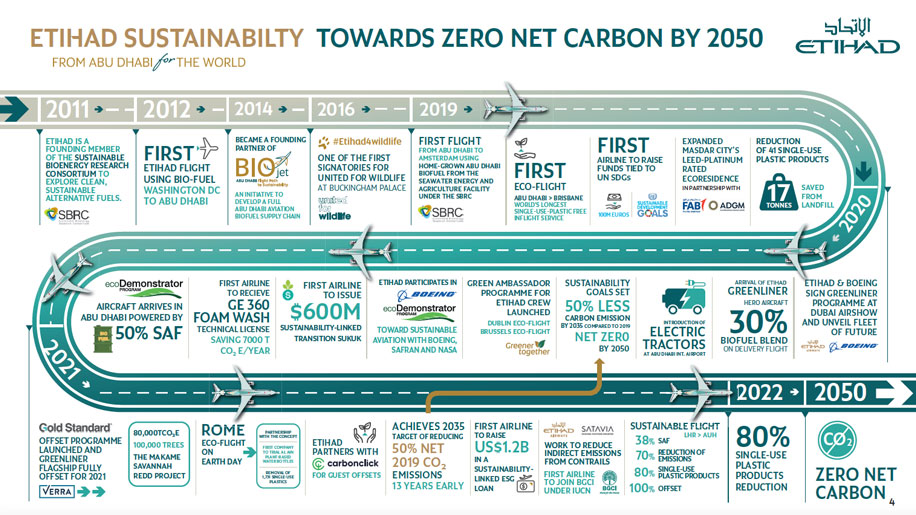 A modern and efficient fleet uses less fuel and so lowers emissions per passenger flown. Etihad is investing in the modern B787 aircraft which, by next year (2023), will represent over 50 per cent of its fleet. This year it will also introduce the A350-1000 powered by the Rolls Royce XWB-97 engines and will continue to phase out older A330 aircraft and B777.

Other operational optimisations sought to reduce the carriage of unnecessary taxi fuel and led to reduced aircraft weights, lowering fuel consumption and emissions. Data also has yielded similar information about the use of potable water carried on aircraft for toilets and wash basins, presenting a pattern of usage across a range of flights, routes and even times of travel. Etihad is leveraging this rich data, and advances in aircraft sensor technologies, to determine optimum volumes of potable water to be loaded, again leading to sizable weight reductions and delivering lower fuel consumption and CO2 emissions.

We have all been frustrated when we are close to our destination, but then spend time circling waiting for our landing slot. This is bad for schedules, but also bad for the environment.

Etihad says that “The most effective and urgently required initiative to reduce aviation’s emissions is the reform of airspace and airspace management. Greater alignment of air navigation service providers, together with increased investment in traffic management infrastructure and continuous development of efficient traffic management practices, would deliver seismic improvement to the airline industry’s efforts to achieve carbon-neutral growth.” 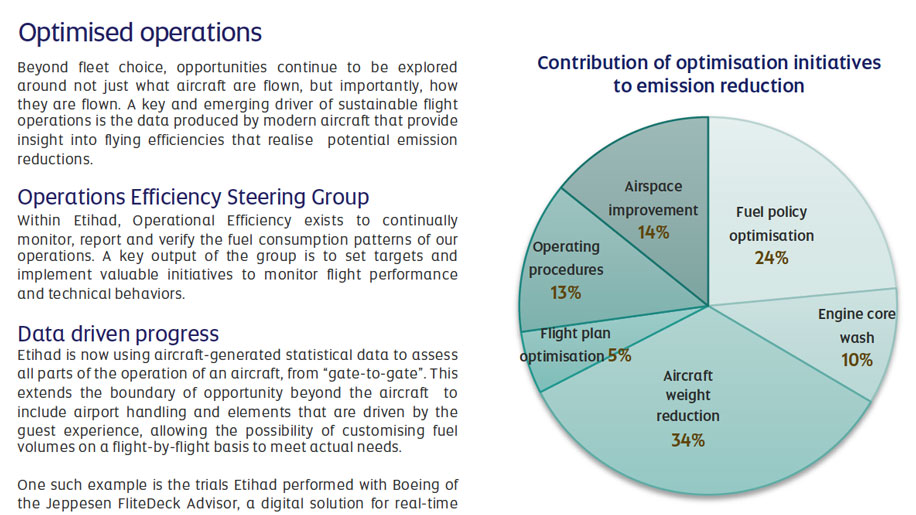 SAF is a priority not only for the airline but for Abu Dhabi, being a guiding principle of the Abu Dhabi 2030 social and economic plan. Abu Dhabi aims to reduce its historic reliance on oil and diversify its economy; including the development of Sustainable Aviation Fuels (SAFs).

To develop the airline’s position on SAF, Etihad has contributed significantly through investments, R&D, trialling and testing, and further, into advocacy to expand positioning for SAFs. This includes  diversified feedstock, namely: Salicornia (biofuel), municipal solid waste (gasification to SAF) and green hydrogen based synfuels.

It is a founding partner of BioJET Abu Dhabi which aims to develop a biofuel supply chain in the UAE as well as the Sustainable Bioenergy Research Consortium. In 2021, it signed a Joint Development Agreement with Tadweer (Abu Dhabi Waste Management Centre) on waste to fuel initiatives, as part of the nation’s targets to divert 75% of waste from landfills by 2025. 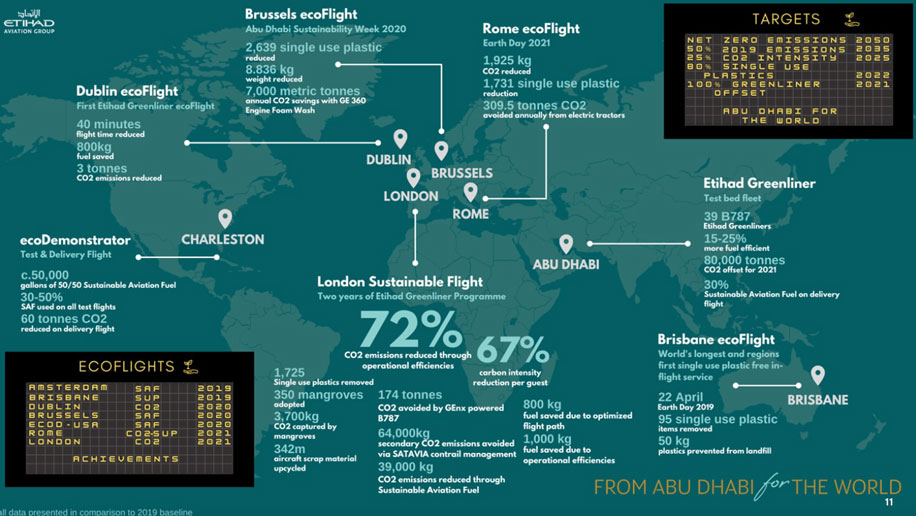 In its Sustainability Report, Etihad says the following

“Etihad has committed to net zero in an effort to avoid the false-gratification of carbon neutral targets. Reliance on carbon offsets to solve the problem will be nothing more than a tragic misstep of intention. Yet, as an industry solely reliant on the creation of emissions to simply leave the ground, we are desperately short of solutions which solve the root of the problem.”

Etihad has committed in CORSIA to offset its emissions (to 2019 levels) through the use of offsets.

As well as offsetting omissions through the programme, it offers both individual passengers and corporates the chance to buy offsets. So, for instance, when a company joins the programme, it can convert the miles it earns into forestation projects and SAF. These solutions will help us reduce our scope 1 emissions, and the corporates scope 3 emissions, as well as protect biodiversity.

At the moment, in the consumer programme only one project is offered. It is the Sichuan Household Biogas Programme which helps poor Chinese farmers recycle farm waste into clean energy. The sustainable fuel (biogas) avoids the use of dirtier cooking fuel (coal and wood) and improves air quality and health of households. The previous one was the  Biogas Energy Project in Hezhang, Guizhou, China which was helping create biogas generators that turn waste into energy, providing a cheap source of energy for rural Chinese farmers.

Loading comments...
Read Next
Where can I travel without a Covid-19 test?
Read Previous
Smart Traveller: donating hotel points to charity 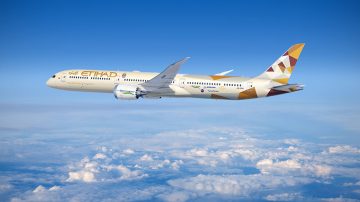 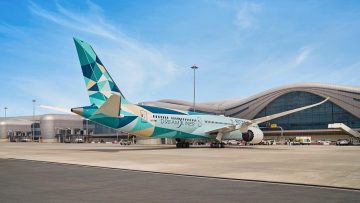