Emirates has a premium economy problem.

As we have reported previously, Emirates is considering the introduction of premium economy on its aircraft.

It’s a big decision, not least since the airline has a current fleet of 254 aircraft and rising, many of which would need retrofitting with a new seat.

Nevertheless, the main issue with premium economy seems to be how the airline differentiates it from the economy cabin.

The attraction of premium economy for the airline is it can charge more for it and achieve a higher profit margin.

However, it can do so only if there is a segment of its customer base which does not want to fly economy, but is not prepared to pay (or is unable to pay) for business.

For the airline, this then creates a dilemma. Does it motivate that segment by downgrading the economy experience and providing premium economy as an alternative, or does it try and devise a “luxury” premium economy, with much more legroom, separate meal service, separate cabin and perhaps separate lines at the airport?

This is the dilemma with which Emirates is struggling.

What did he mean by that, he was asked?

“How it works in the business model bearing in mind what we already do and the product that we offer,” He said, “And how we would have to differentiate the visible product to create room for a premium economy.”

Clark went on to say

“Do you step down what you are doing for people travelling on deeply discounted fares in economy, or do you uplift the product – which is already pretty high anyway – for the premium economy cabin? And what then is the price point for that?”

As Clark is aware, there are dangers for Emirates in both approaches. Taking something away from economy affects the vast majority of your customers, and they can always fly with someone else, particularly given the fierce competition with Qatar Airways and Etihad.

On the other hand, deciding to “uplift” the economy product to create a premium economy that matches or betters rival’s products runs the risk of cannibalizing your business class passengers. You don’t want them to decide that while they would never fly economy, they could easily fly this new premium economy and save themselves some money.

“Many carriers have done it and done it quite well, [so] that is traction for us.”

Nevertheless, he came back to the sheer size of the decision “In terms of putting it into a 254 wide body fleet that we have today and doing the whole retroactive process of trying to get it into all airplanes.”

“So you look at the application, the execution, the implementation and then decide if the investment is going to be worth it?”

Emirates hasn’t made that decision yet. But it’s coming. 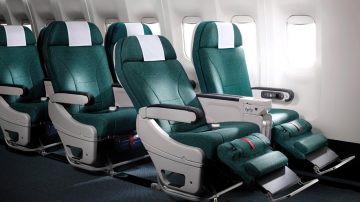 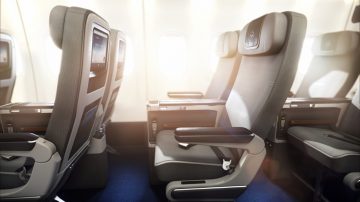