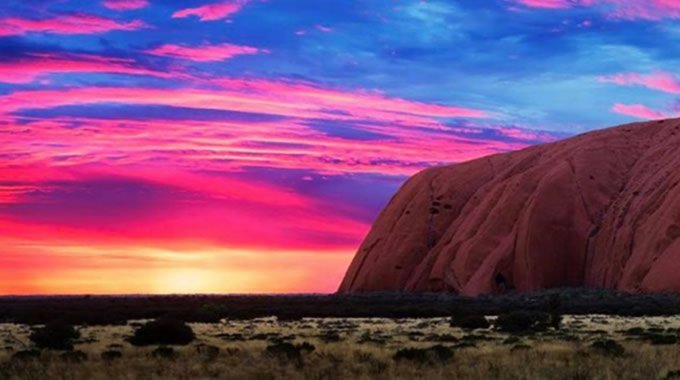 Perhaps Australia’s most famous icon, the giant stone monolith of Uluru / Ayers Rock is located right at the centre of Australia and serves almost literally as Australia’s heart.

Uluru was named “Ayers Rock” by Europeans in 1873 when William Gosse gave it its title after Sir Henry Ayers, the Chief Secretary of South Australia at the time.

Uluru was originally formed under the ocean, and gradually hardened over the course of hundreds of thousands of years. The landmark has been officially known as “Uluru / Ayers Rock” since 2002 and stands as one of the few dual-named geographical features in Australia.

Uluru stands 348 metres above sea level at its tallest point (24m higher than the Eiffel Tower), yet it resembles a “land iceberg” as the vast majority of its mass is actually underground – almost 2.5km worth!

It is estimated to be around 600 million years old.

The greater Uluru area is considered a sacred site by native Aborigines, particularly the local Anangu tribe who are considered its traditional landowners.

While climbing the rock is not illegal, it is still considered disrespectful to the Aboriginal culture and has resulted in 37 deaths since the 1950’s.

Uluru was declared a UNESCO World Heritage site back in 1987.

The closest and largest town to Uluru is Alice Springs, which is around 450km away.
It has one of the best sunsets in the country – in fact, it was voted in the Australia’s Top 10 Sunsets – due to the amazing red that comes from a combination of the angle of the sun, minerals in the rock and the reflection of the surrounding soil.