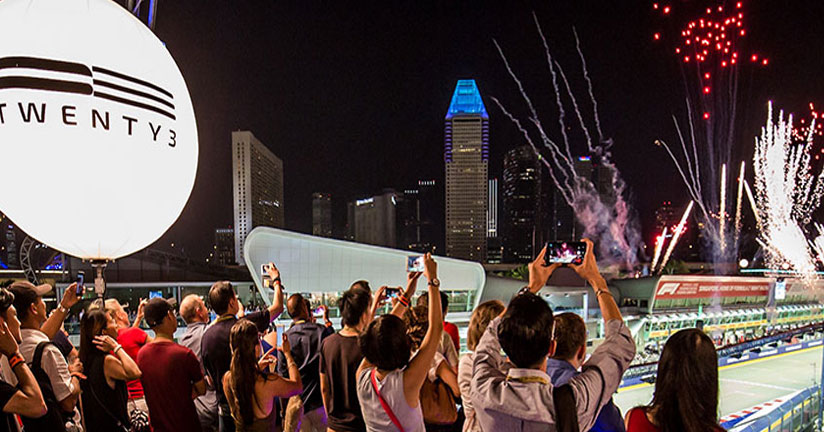 There is a sense of inquisitiveness as you look down the home straight at the Singapore Grand Prix. For a moment the noise of engines has gone silent, there is no activity from pneumatic wheel changing crews, just the view of the crowds on both sides of the track darting in and out of the various buildings that adorn the start line of the racetrack. 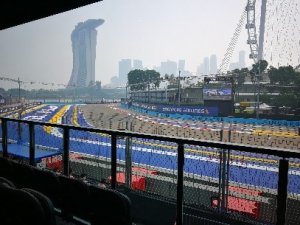 As you look closer you realise that the grand prix isn’t just about the racing. These odd shaped crafted units are uniting people during a weekend of frenetic racing on the track and offering them an experience that will leave them with memories for a lifetime.

These unique hospitality suites are what keep the thousands of fans entertained, watered and fed through three days of high excitement. There are six specially designed hospitality facilities at the Singapore Grand Prix. Each one offering a different experience allowing you the chance to combine the food and beverage options available as well as serving up first class social and networking opportunities for you and your guests.

Our combination over the weekend saw us enjoying both ends of the grid and giving us amazing views of qualifying on Saturday and the race on Sunday.

We started our experience on Saturday in the Sky Suites at Turns 1 and 2. We were met by a team of attentive and very helpful servers who explained the menu to our party and serving times so that we could plan our day around the racing and entertainment. The suite was spacious, comfortable and temperature controlled, and we were well looked after with a constant stream of service to ensure that we remained refreshed throughout the day. 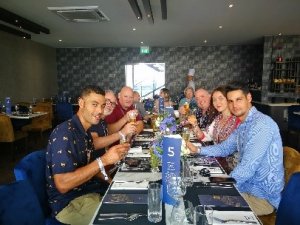 With a choice of sitting on the balcony in front of our table or wandering around the rooftop Sky Terrace, there is a real buzz of excitement wherever you choose in the hospitality suite to watch the races from.

We were tantalized with a wonderful array of food, with Cod Croquettes and Turkish Kebabs to start the afternoon off, followed by dinner at 6.30pm which included Monkfish, Seared King Scallops and Rack of Lamb, Baked Jumbo Prawns and Chicken Tikka and finishing off with a Banoffee Pie.

Taking to the evening sunset on the Sky Terrace, we were able to take in the stunning sights of the Marina Bay Street Circuit as well as overlooking the Wharf Stage where we indulged in cocktails and signature dishes whilst listening to the bands on stage under the stars.

On our return to the track on Sunday we were taken to the highly fashionable hospitality facility Twenty3. Situated at turn 23, the final corner of the circuit. Twenty3 doesn’t just give you a perfect view of the race, but it also allows you to watch the pre-race starting grid as well as the post-race podium celebrations.

We were welcomed by a team of extremely friendly and knowledgeable staff who despite our eagerness to explore, were patient enough with us to explain all the facilities and the locations of all the F&B outlets within the hospitality suite.

What an amazing place this is. You are free to sit anywhere and explore the many different options available for food and drink. Champagne was served on arrival as we wandered around to find our base for the day. There are six bars for us to visit along with Michelin star restaurants to tease us with mouth-watering cuisine.

With drinks ordered our first call, was the Bay Terrace for some early afternoon snacks. With so much choice available it was difficult to decide what to pick first. Eventually we settled on Burger and Lobster. Mouth-watering Lobster Roll and succulent burgers, all served in a luxurious al-fresco setting. Other food choices consisted of Mee Siam, Laksa and Grilled Seafood and the wonderful BBQ Chicken Wings were a constant favourite throughout the day. 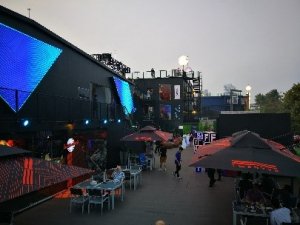 In between the racing, we were entertained at the Terrace Stage, where DJs, fire dancers and Taiko drummers kept the day busy for us while we sipped on a range of drinks to keep the party going.

Every so often we would retreat back into the cool atmosphere of the Apex Lounge, where the big screen kept us informed of all the activities on the track and the build up to the big race.

With the race drawing near, it was time for dinner, and we had three feature restaurants to choose from.

Podium Izakaya offered fresh off the grill Kohitsuji Rib Yakinku, just one of the many Japanese influenced dishes complimented a selection of Japanese sake and cocktails.

At Largo Do Paço, Chef Tiago Bonito served up classic Portuguese recipes that were brought to life by a number of ingredients not traditionally associated with Portuguese cuisine. Meanwhile, next door at San Domenico, the two-Michelin starred chef Massimiliano Mascia, offered tempting Italian fare which included Veal Cheek with Soft Polenta.

Spoilt for choice, we decided to sample the delights at Takagi, which under the influence of Chef Takagi is a two-Michelin starred restaurant that served up signature dishes such as Lobster with Miso Sauce, Roasted Duck with Foie Gras Kinome Miso and Crab Meat with Caviar. The meal was so good it was transcendental. We lost ourselves in it, and for a moment, we forgot that we were at a grand prix dining on top quality food.

For those with a sweet tooth, Sidetracked and Sugar Rush were not to be missed. There was a yummy variety of desserts from Prague’s Good Food and Coffee Bakery, award winning pâtissier Philip Khoury and pastry chefs Eddie Stewart and Min Chai. The choices for our sweet indulgence were endless.

The start of the race saw us heading to the Sky Loft. This open-air environment gave us amazing views of the city skyline across the bay and really increased the excitement for the start of the race. With views overlooking the grid a constant supply of cocktails and beverages were available to keep us happy throughout the race. 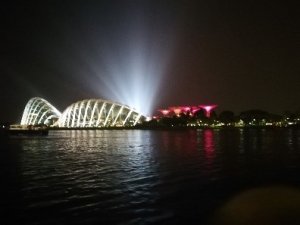 Two hours of an enjoyable race culminated in a thrilling display of fireworks, which we had an unobstructed view of from the Sky Loft. After all the excitement we returned to the Apex Lounge, where the kinetic light feature entrances you and setting the mood for an evening of partying with resident DJs.

The Singapore Grand Prix really does live up to its reputation as a marquee event on the Formula 1 calendar. The world class hospitality that you can enjoy here is an unforgettable experience that you will want to go through over and over again.