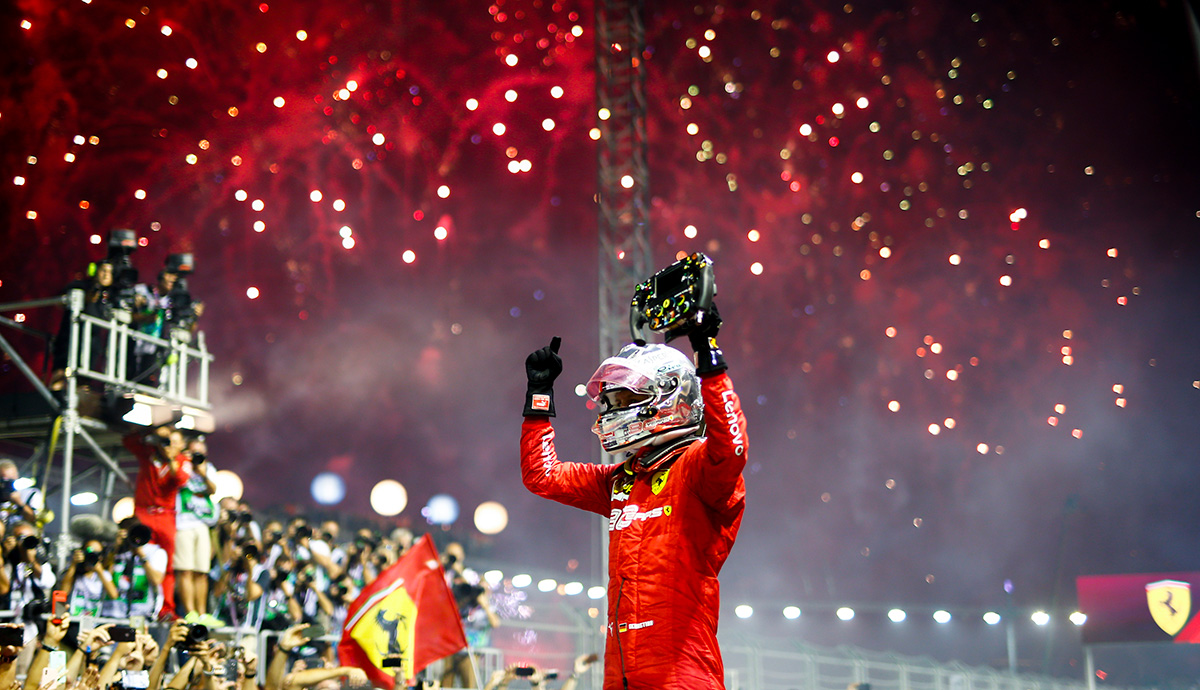 After a season with more down than ups, and more than twelve months since he last stood on the top step of an F1 podium, Sebastian Vettel won the Singapore Grand Prix ahead of teammate Charles Leclerc, who had started the race on pole. Ferrari gambled on an early pitstop for Vettel, and when both drivers had returned to the track on fresh rubber it was theGerman who remained ahead, triggering radio complaints from Leclerc.

“To be completely honest with you, I don’t understand the undercut. We will discuss it after the race. My head is down and it will be down until the race–I just want to let you know my feelings,”said Leclerc on the Ferrari team radio.

Vettel was able to hold on to his lead through several Safety Car restarts, with Leclerc around 0.9s behind for most of the closing stages. After 61 laps, the four-time champion took the chequered flag with a 2.6s margin over his teammate, with Red Bull’s Max Verstappen completing the podium. 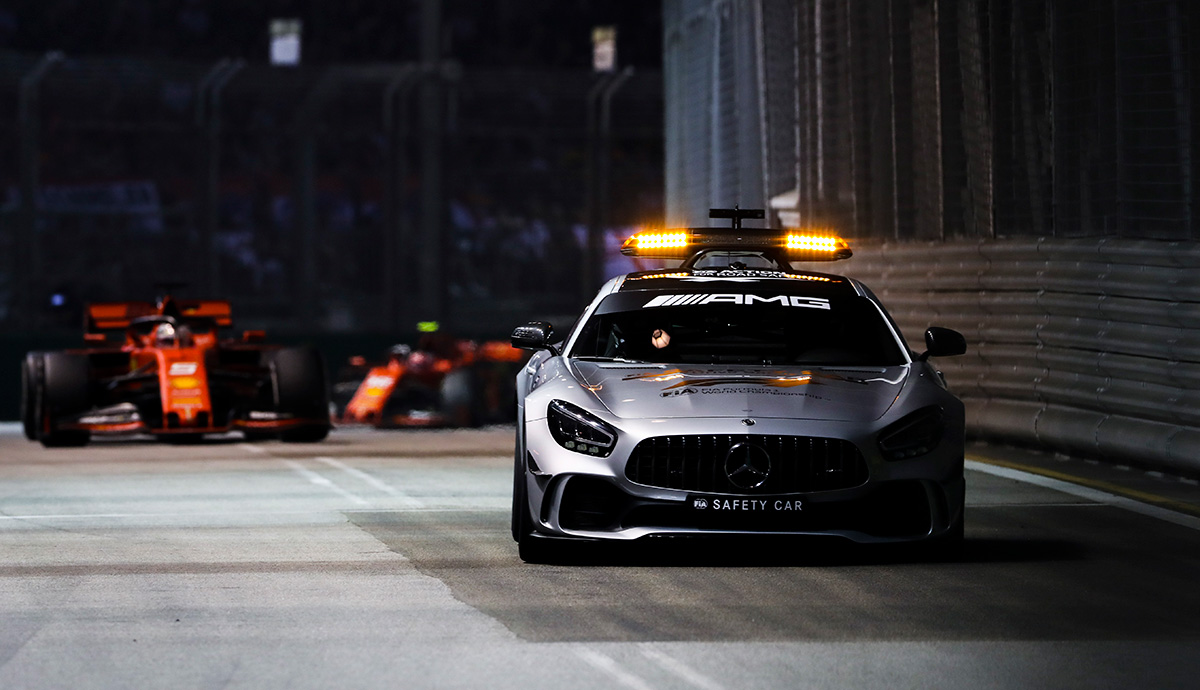 Despite little action towards the head of the pack, the Singapore Grand Prix was an action-packed affair with three Safety Cars and all manner of near misses. The Marina Bay StreetCircuit has seen at least one Safety Car at every running of the grand prix, and while the firstSafety Car of the 2019 race did not come out till the half-way point, between laps 36 and 50 it  made three appearances. George Russell was hit by Romain Grosjean, and required recovery, and three laps after racing resumed Sergio Perez parked his Racing Point in the approach to Turn 14, bringing it out for a second time. On lap 50, Kimi Raikkonen retired following a collision with Daniil Kvyat, bringing out the third and final Safety Car. 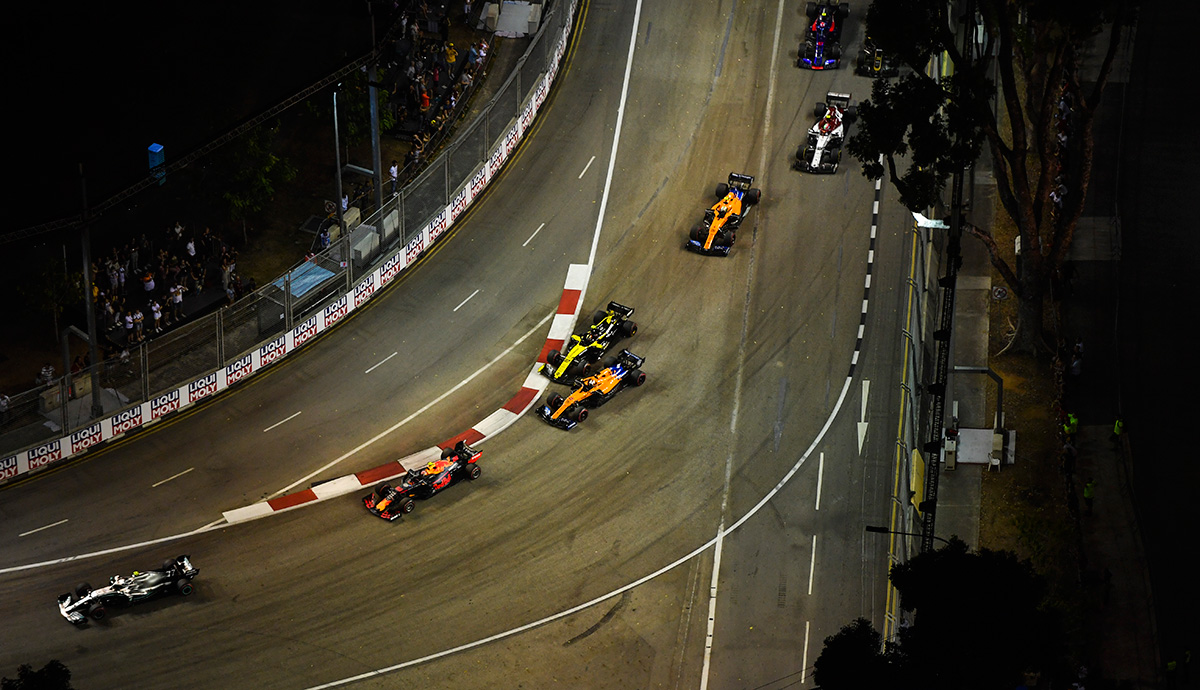 The ‘best of the  rest’ championship saw several pendulum swings in Singapore on Sunday night, with extreme highs and lows from the midfield teams. Antonio Giovinazzi briefly led the race during the pit stop window, the first time an Alfa Romeo has led a grand prix since 1983.Racing Point saw accident damage for Lance Stroll and a retirement for Sergio Perez, leading to the second Safety Car of the race. The Renault-McLaren battle saw winners and losers on both sides, with Daniel Ricciardo dropping back after contact with Giovinazzi on lap 34.McLaren suffered on lap one, with Carlos Sainz suffering an early puncture, leaving it to Lando Norris to pick up points for the team. 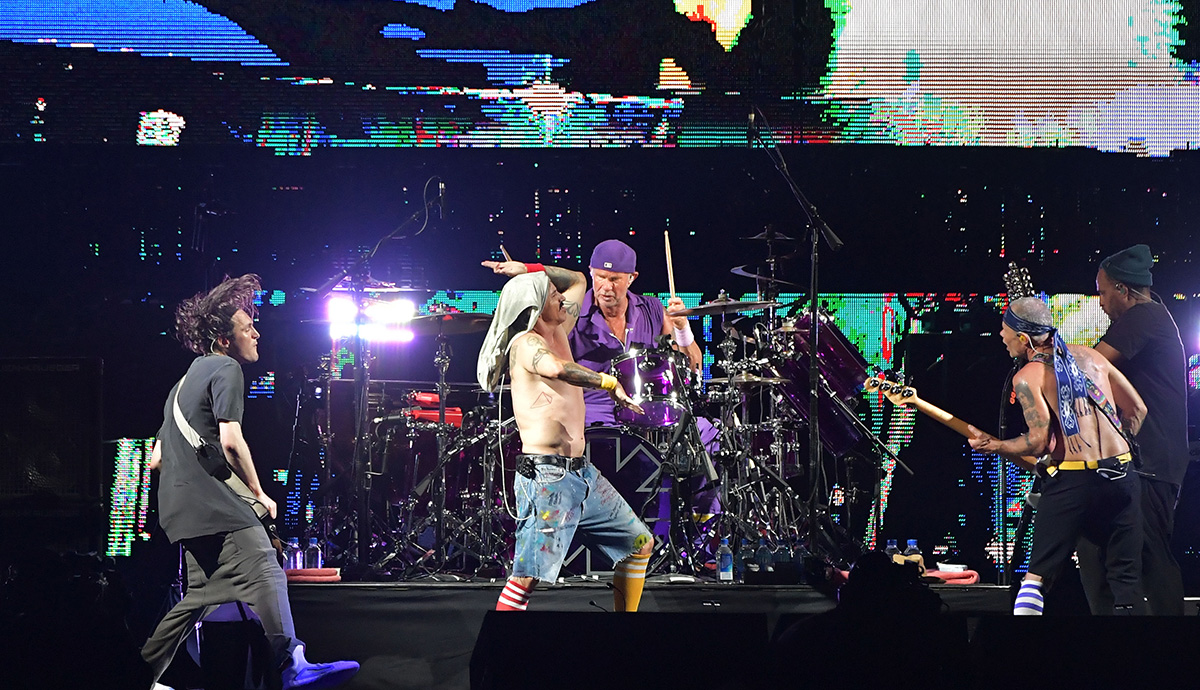 Off the track, the event’s stellar entertainment line-up over the race weekend includedSwedish House Mafia, Muse, Gwen Stefani, Fatboy Slim, Hans Zimmer, as well as Toots and the Maytals, with Red Hot Chili Peppers closing the action-packed weekend to a 65,000-strong crowd at the Padang Stage after the chequered flag was waved.Overall, the Formula 1 Singapore Airlines Singapore Grand Prix 2019 recorded an  attendance of 268,000, its second highest ever attendance since the inaugural night race.

ABOUT THE FORMULA 1 SINGAPORE GRAND PRIX

Singapore has successfully hosted a decade of night racing and Asia’s only street race on theFormula 1®calendar in the Republic since 2008. The Formula 1 Singapore Grand Prix will continue to enthral crowds with its unique combination of night race action and world-classent ertainment till 2021. See the world’s finest drivers go wheel-to-wheel under lights at speeds of up to 320km/h, threading the barriers around Singapore’s picturesque Marina Bay featuringa spectacular backdrop of iconic heritage buildings, modern architecture and a stunning skyline.