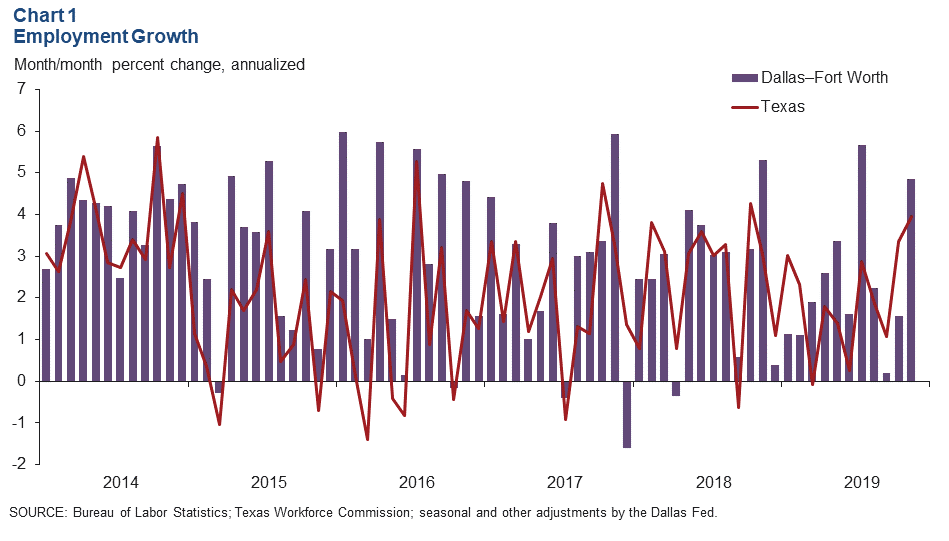 The DFW labor market continued to be tight, with unemployment close to multiyear lows. In November, the unemployment rate remained at 3.2 percent in Dallas and 3.3 percent in Fort Worth (Chart 2). Unemployment remains below the state and U.S. rates. 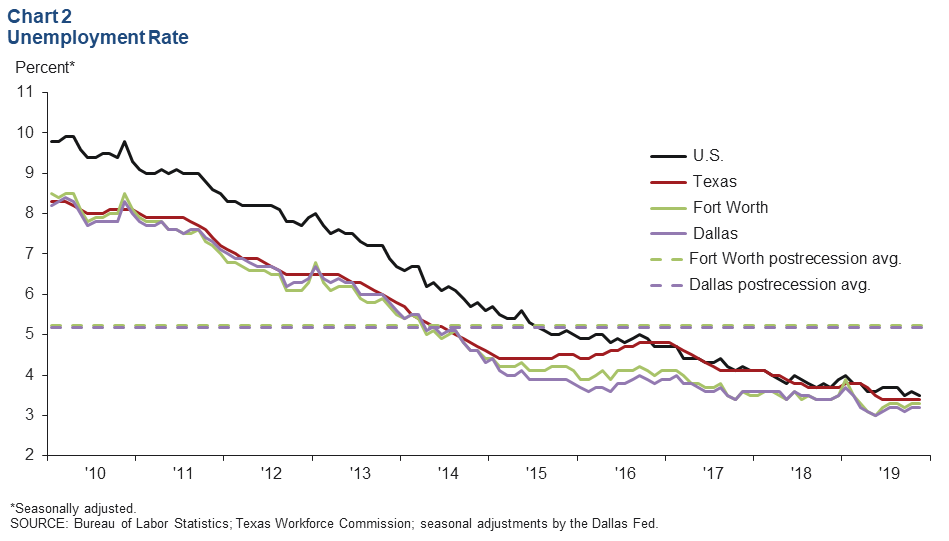 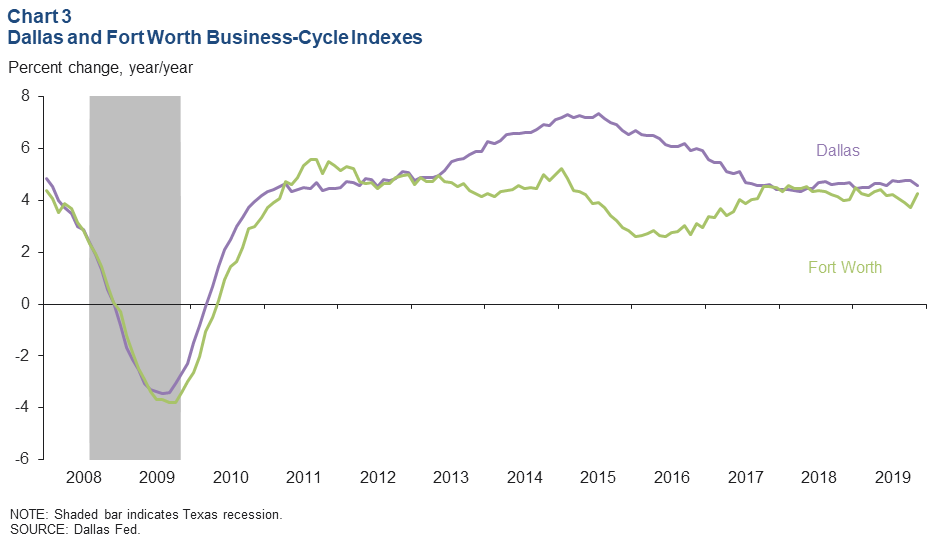 Homebuilding remained active in the metroplex, buoyed by housing demand. DFW single-family housing permits dipped slightly in October and November after rising strongly during the summer, and the three-month moving average showed continued growth (Chart 4). Through November, total single-family permits were trailing issuance for the same period last year by 4.0 percent in DFW but were 1.0 percent higher in Texas. DFW single-family permit growth decelerated to 3.4 percent last year after growing 15.8 percent in 2017. 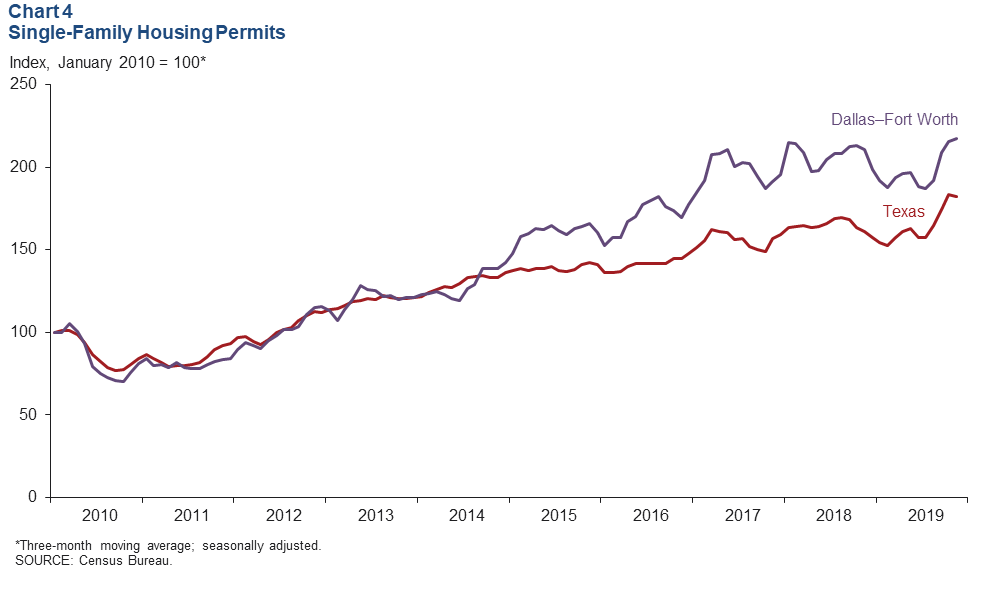 DFW home prices rose in the third quarter as solid job creation and tight home inventories propelled increases. House prices rose 1.3 percent in Dallas and 1.2 percent in Fort Worth in the third quarter, according to the Federal Housing Finance Agency’s house price purchase-only index. On a year-over-year basis, prices were up 3.8 percent in Dallas and 5.9 percent in Fort Worth, while U.S. and Texas prices both increased 4.9 percent (Chart 5). Home-price appreciation in the metroplex has slowed from its torrid pace in 2015–17, when prices in both Dallas and Fort Worth rose by 10 percent annually. 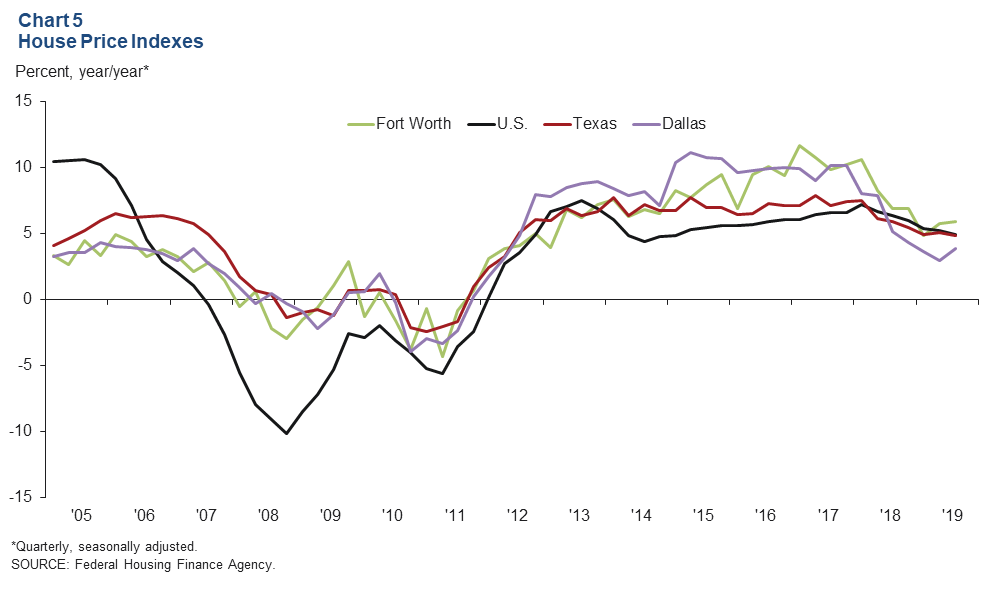 DFW existing-home inventories remained tight and well below the six months’ supply typically associated with a balanced market. Inventories inched up in 2018 but have been fairly stable this year; in November 2019, they were at 3.1 months in Dallas and 2.5 months in Fort Worth, slightly below the Texas and U.S levels of 3.6 months and 3.8 months, respectively (Chart 6). Inventories of entry-level homes (priced below $200,000) were the tightest around 1.6 months of supply—a level that has changed little the past three years. Inventories of homes priced from $200,000 to $299,999 were just over two months. 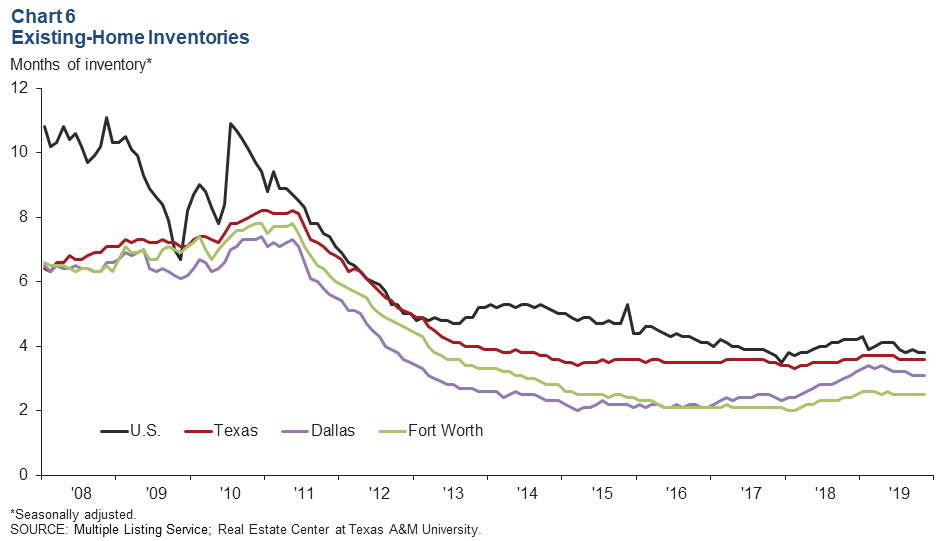 NOTE: Data may not match previously published numbers due to revisions.

About Dallas–Fort Worth Economic Indicators

Questions can be addressed to Laila Assanie at [email protected]. Dallas–Fort Worth Economic Indicators is published every month on the Tuesday after state and metro employment data are released.

Here’s the map of where T-Mobile will offer wireless 5G service in Dallas-Fort...

Why DFW was named top real estate market to watch in 2019
Scroll to top
error: Content is protected !!