Supermarket giant Coles has signed a long-term contract to get electricity from three new solar farms, the latest in a series of companies that have turned to renewable energy to lower power bills.

It comes as a group of 41 retailers and businesses including Bunnings, Harvey Norman, Ikea and JB Hi-Fi plan an unprecedented joint electricity purchase in a bid to reduce costs.

Coles announced a 10-year deal to buy most of the electricity generated at three new solar farms to be built outside Wagga Wagga, Corowa and Junee in NSW.

The plants will be operated by global clean energy company Metka EGN and are expected to provide the equivalent of 10% of Coles’ power needs from June next year.

Steven Cain, Coles Group’s chief executive, said the company was committed to being the most sustainable supermarket in Australia. It had spent more than $40m on energy efficiency over two years and installed solar panels on 30 stores, with another 38 to follow this financial year.

The supermarket agreement follows a similar announcement on Monday by Molycop, a manufacturer for mining and rail companies, that it had signed an 11-year-deal to take electricity from a separate solar farm near Wagga and the Sapphire wind farm in northern NSW to help it limit the impact of rising power prices.

Consultants Energetics say corporate power purchase agreements have supported about 3700 megawatts of clean energy since 2016, more than 80% of which have been new developments. About half of the projects underpinned by big business have been large-scale solar, 40% wind and just under 10% a mix of the two. 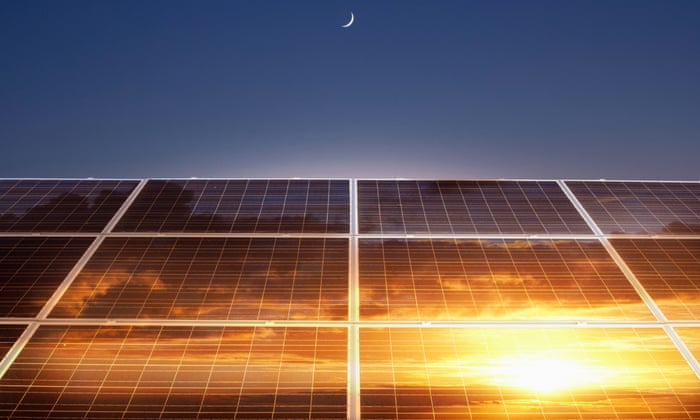 It is understood the falling cost of solar and wind energy suggested clean energy deals would continue to be signed. Photograph: Colin Anderson/Getty Images

While there is uncertainty over whether the clean energy boom of the past two years will continue, Kane Thornton, chief executive of industry group the Clean Energy Council, said the falling cost of solar and wind energy suggested deals would continue to be signed.

“We’re just going to see more and more businesses got it alone or join consortia to provide their power and the economics says more and more that will be renewables,” he said.

The group of 41 retailers, also including Officeworks, Chemist Warehouse, Costco and Spotlight, have applied to the consumer watchdog for approval to ask for tenders to supply their power needs, which adds up to 0.5% of the total electricity drawn from the national grid.

Lodged on behalf of the businesses by the Large Format Retail Association, the application to the Australian Competition and Consumer Commission does not say the electricity would be renewable, but it cites two previous large-scale clean energy bulk buys, by the South Australian Chamber of Mines and Energy and the City of Melbourne, as evidence of why the application should be approved.

It says the consortium could expand to include other companies, but would not make up more than 1% of electricity use, and could lead to investment in new generation while lowering power bills for member companies.

Tony Wood, energy program director with thinktank the Grattan Institute, said the joint bid illustrated the frustration businesses felt about high electricity prices, which have been linked to the lack of a coherent national energy policy.

Lindsay Soutar, a campaigner with Greenpeace, said the Coles deal was a “great first step” and showed companies were now leading the way on a transition to 100% renewable energy. “People have the choice to support the businesses that are doing their part in enabling a safe and healthy climate,” she said.

Drawing the line between ‘wokewashing’ and corporate advocacy
Scroll to top
error: Content is protected !!