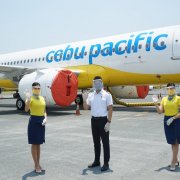 Many Filipinos are yearning to travel again after the prolonged confinement, while some who are away from their homes cannot wait to be reunited with their families. The way people travel is changing and while we have to put off the thrill of new adventures for now, Cebu Pacific assures everyJuan with an essential or immediate need to travel that the airline is more ready than ever to accompany them on a safe journey to destinations they need to be. 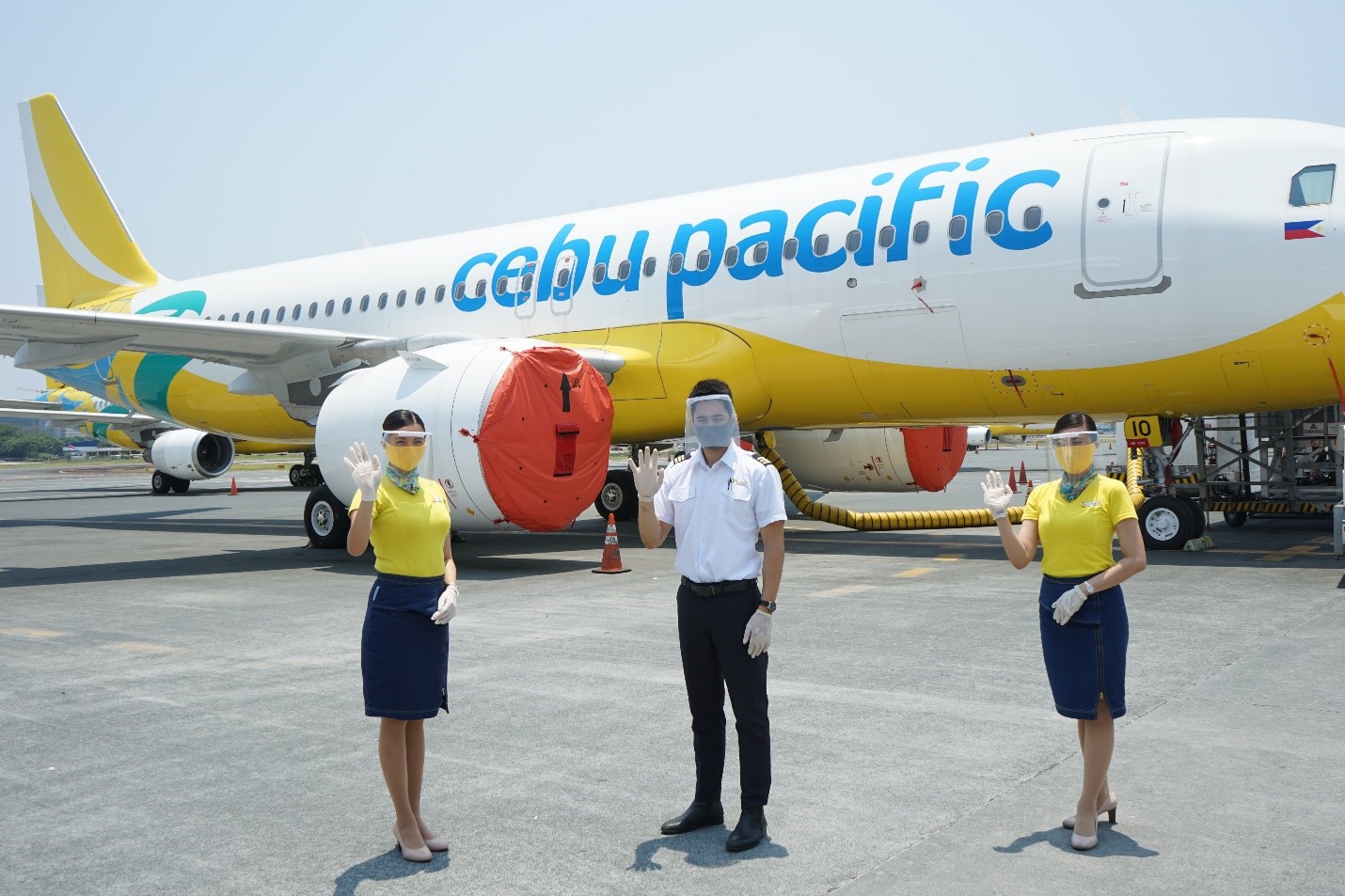 As part of its preparation to fly again in the near future, Cebu Pacific rolls out measures for contactless flights. Having everyJuan’s health and safety in mind, the airline will continue to promote social distancing and minimize face-to-face contact between passengers and staff with the following guidelines:

All Cebu Pacific ground staff are required to wear Personal Protective Equipment (PPEs) while on duty. Self-check in kiosks, check-in and bag drop counters, as well as shuttle buses will be undergoing frequent cleaning and disinfection procedures to ensure a clean environment. Alcohol-based hand sanitizers will also be stationed at CEB passenger areas for guest and staff use. 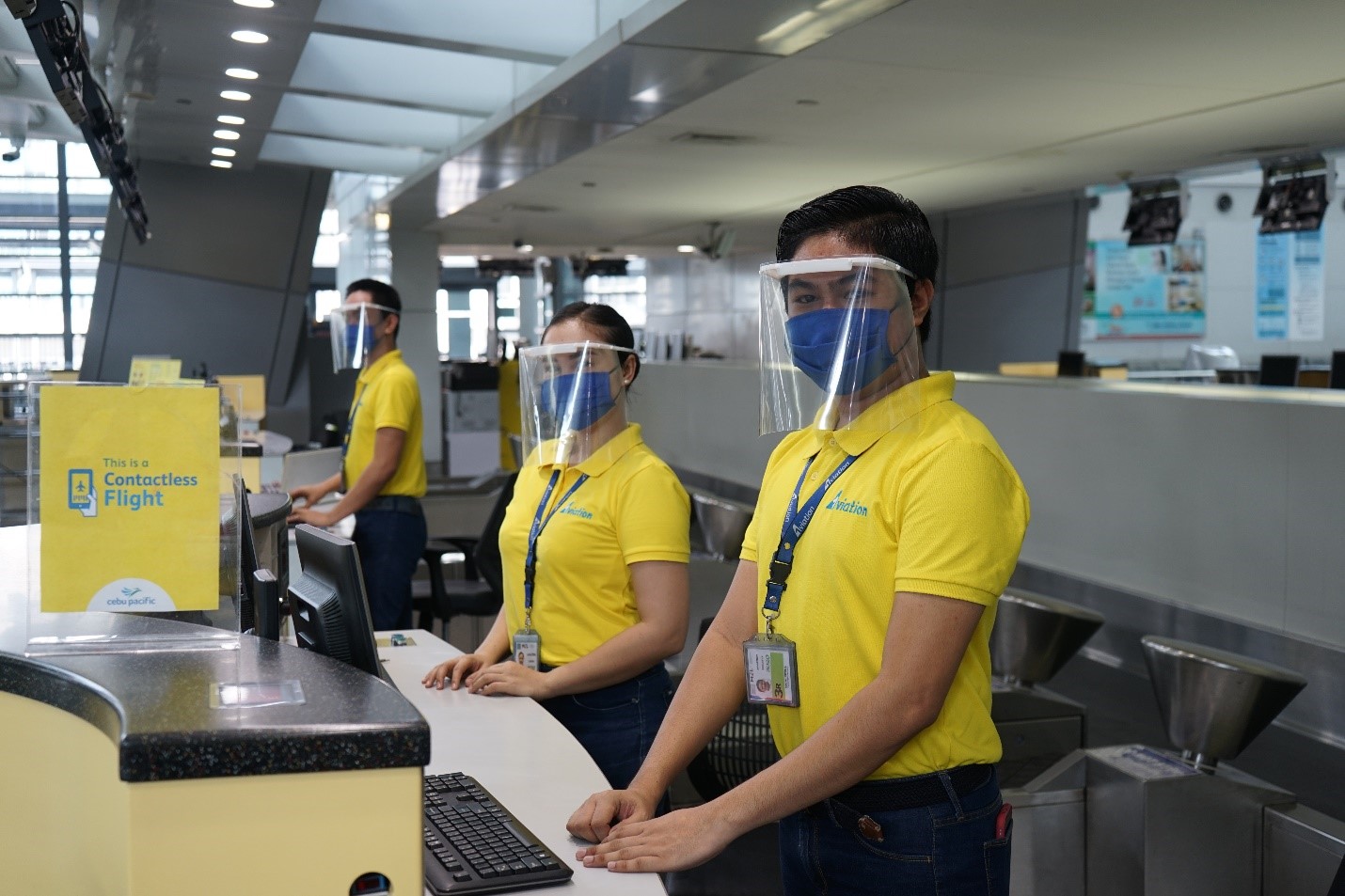 Self-check in and no-touch boarding

Prior to their flights, passengers are strongly advised to check-in online for faster processing and lesser human contact. Travelers will also be expected to come to the airport at least two (2) hours early as check-in counters will be closed 60 minutes before their flights. When carrying more than two (2) luggages, assign only one representative to go to the baggage drop-off counter. Upon boarding, passengers will be required to hold out their boarding passes with the barcode facing the airline staff, for touchless scanning. 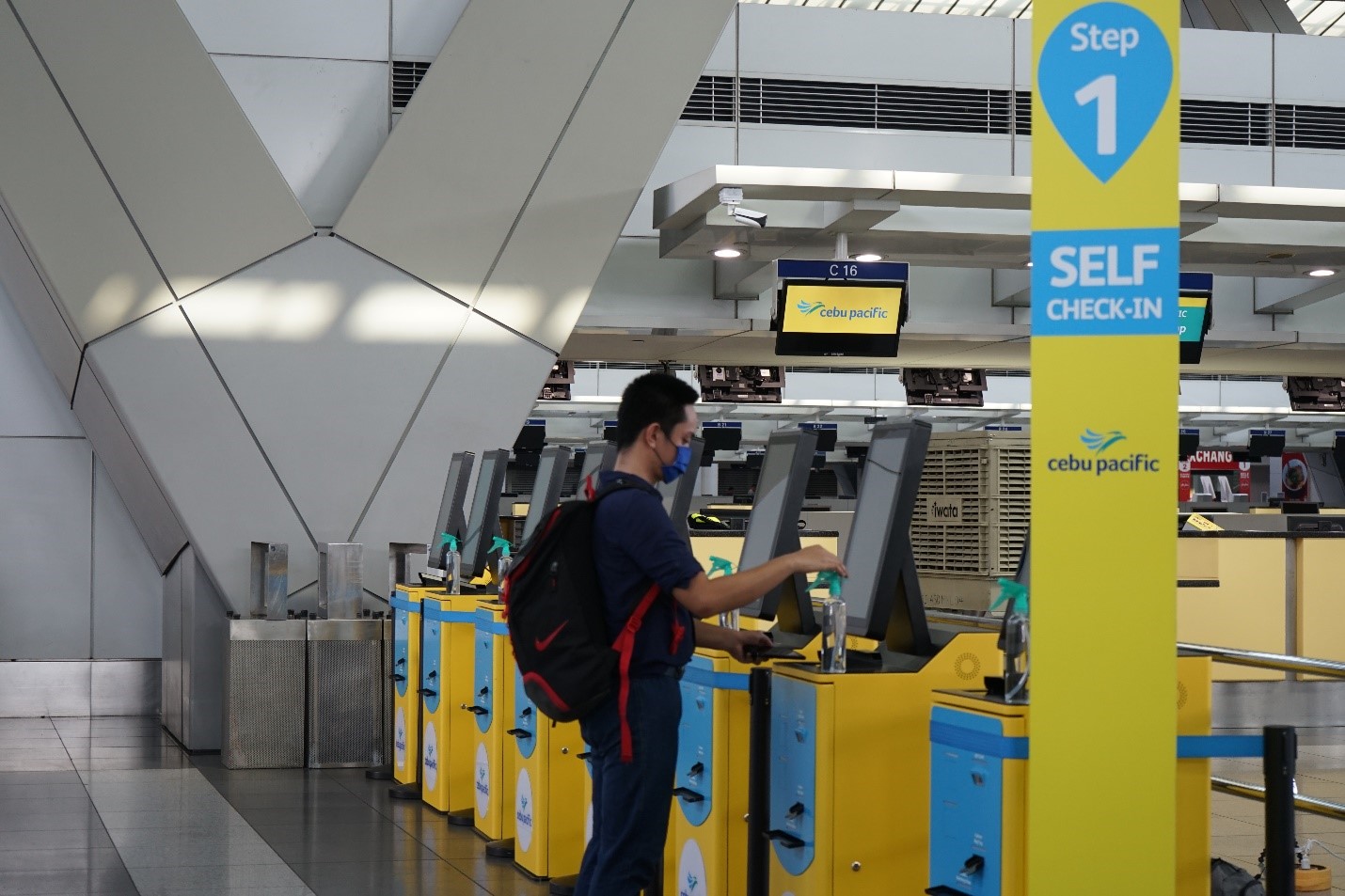 Wearing face masks will be mandatory for all passengers for the duration of the flight. Passengers will have to stow their own hand-carry bags in the overhead bins and will be expected to practice self-disposal of trash and waste at the end of the flight. Middle seats will be kept vacant as much as possible to give way for social distancing on board. Cabin crew members will also be strictly implementing no changing of seats during the flight. Orderly deplaning procedures must also be observed by everyone on board. 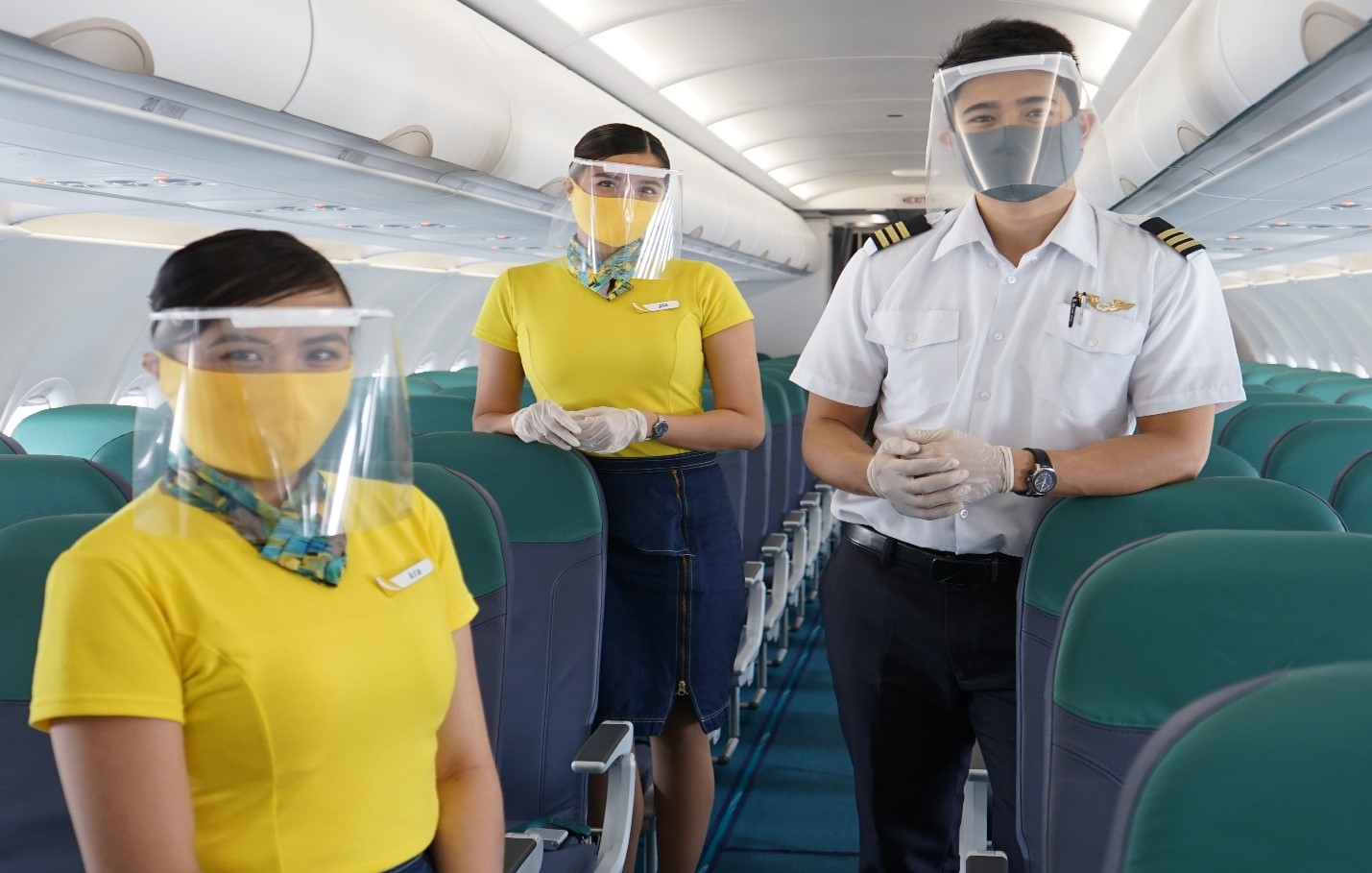 As part of CEB’s commitment to flatten the curve, pilots and cabin crew members will undergo rapid antibody testing to ensure that they are healthy and in top condition before boarding their flights. They will be given their own PPEs and face masks to be worn on duty, gloves for servicing passengers, as well as disinfectants to be used to clean the aisles and seats in the cabin. Operating crew cleared for flights will also be given PPEs and will be trained to assist and isolate guests on board, as needed. 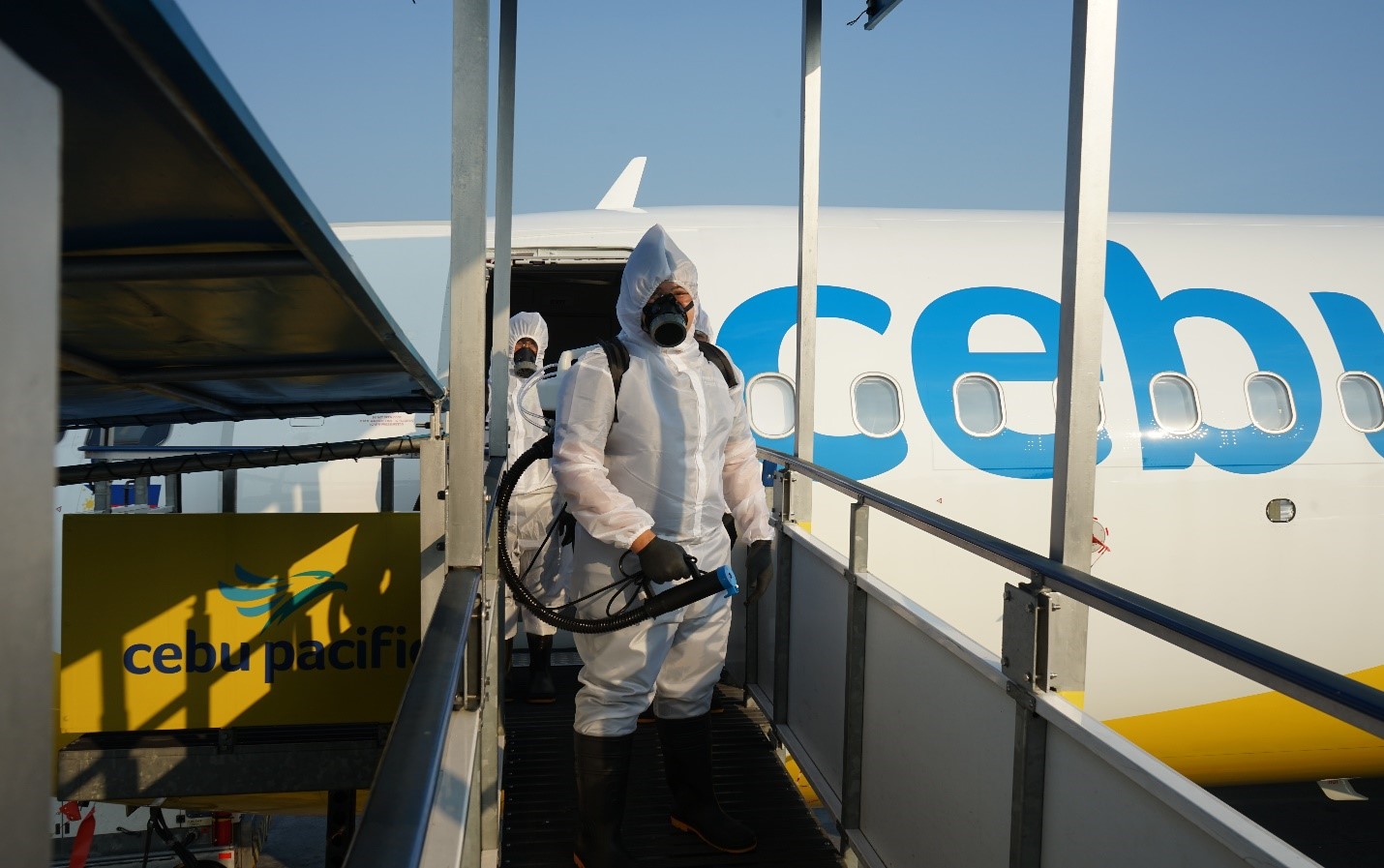 Those flying as soon as the quarantine is lifted will be assured that the cabin air is clean and safe. The airline’s fleet of Airbus jets are equipped with High Efficiency Particulate Arrestor (HEPA) filters to block microscopic bacteria and virus clusters, including the Novel Coronavirus, with 99.9% efficiency. By average, air inside the cabin is also changed every 3 minutes to maintain fresh and clean air.

Along with maintaining the air circulation in the cabin safe and clean, the airline has also put in effect thorough daily disinfection of all aircraft which follows procedures approved by the Bureau of Quarantine and World Health Organization. These include misting of the cabin using a disinfectant approved for Airbus jets, as well as regular sanitation of all surfaces inside lavatories—from walls, sink, mirror, knobs, toilet bowl, and floors in between flights. All lavatories will also be sanitized every 30 minutes during a flight.

With these safety measures, Cebu Pacific is looking forward to safe and mindful travels as everyJuan eases into the new normal and gets ready to fly again. 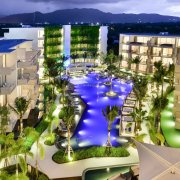 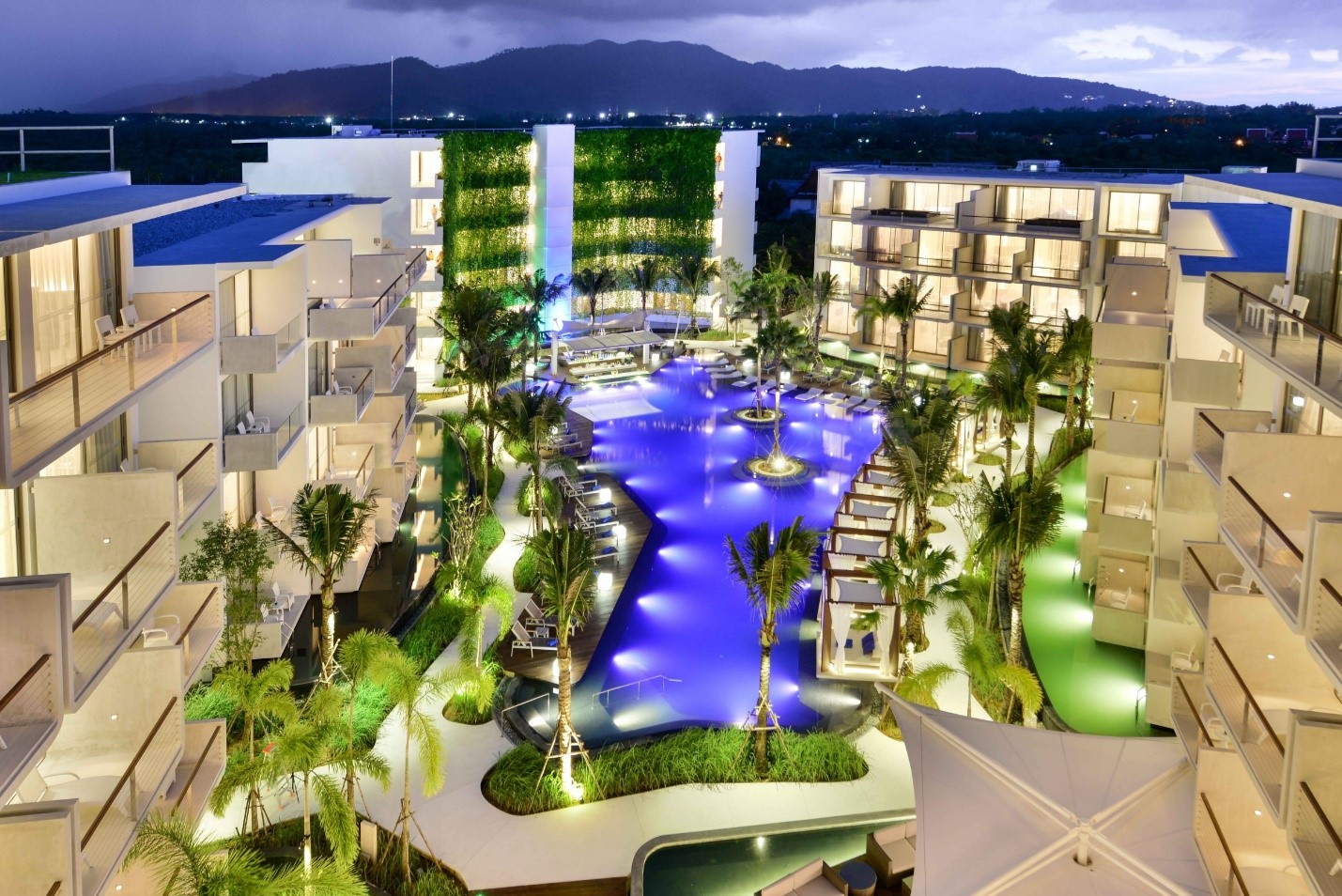 Like a desire that lingers in the subconscious, Dream Phuket Hotel & Spa is something out of a daydream. Conveniently located 20 minutes from the Phuket International Airport, 10 minutes away from the Laguna community and just 5 minutes away from Layan Beach, the hotel is situated away from the hustle and bustle of Phuket’s commercial destinations. Clean, contemporary textures such as natural wood and stone complement lush greenery surrounding a sparkling pool. The swim-up Pool Bar, sun loungers and breezy private cabanas make lounging in style an effortless affair. 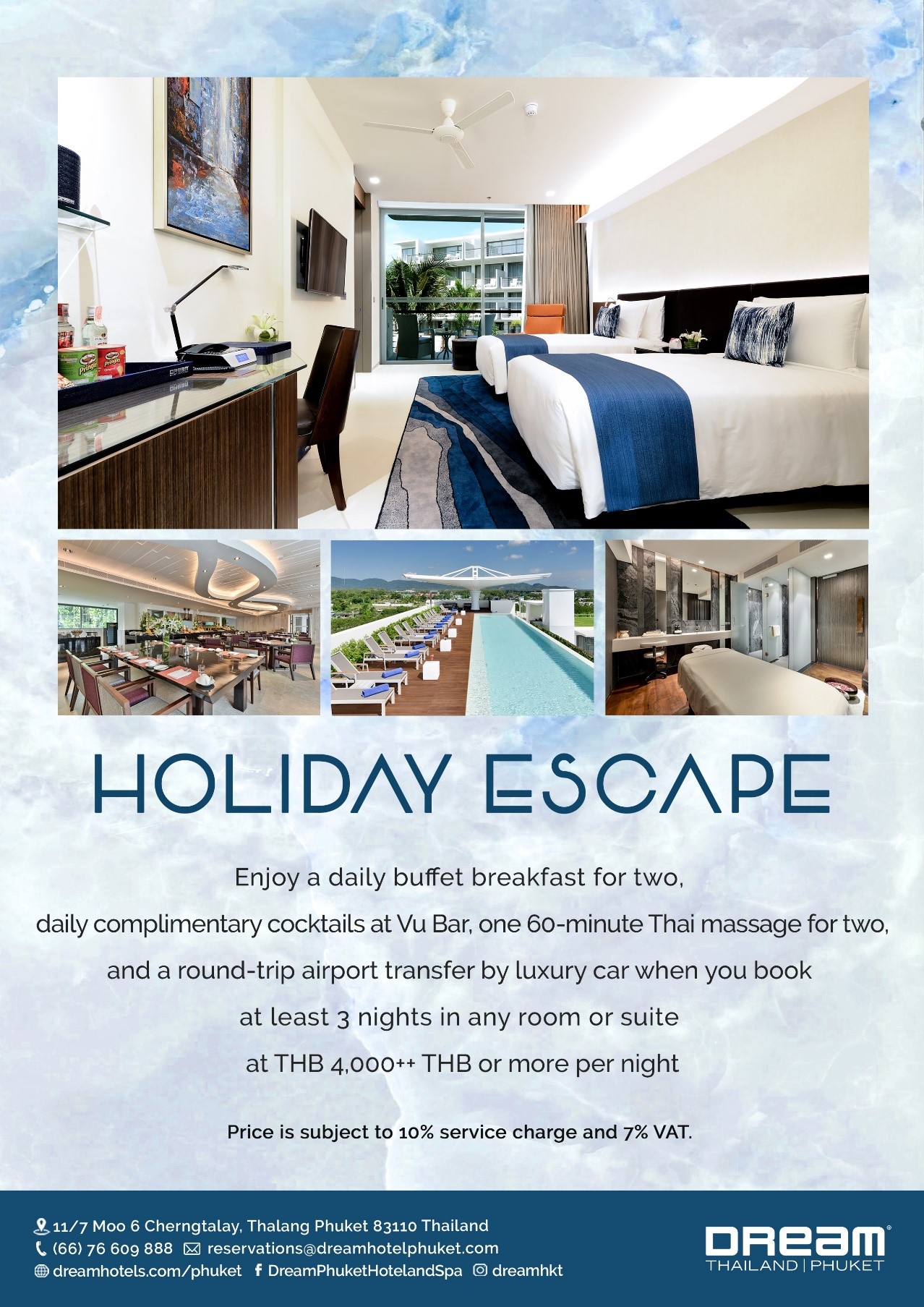 At Dream Phuket Hotel & Spa, fortune favours the bold with the perfect setting to reconnect with your sweetheart or besties or befriend an attractive stranger or two. From Vu, the rooftop bar and infinity pool, take in the breathtaking panoramic view of the surrounding lush hill views. Host private events indoors at Indulge, the leather-clad restaurant and bar. Trilogy, the signature restaurant tempts and charms with the daily international breakfast, all-day dining and a menu of epicurean delights for dinner. Live vicariously through the theatre-style kitchen as world-class chef’s sauté and flambé to satisfy your every craving. Social and trendy with a dash of local flare, the fantasy-fueled interiors of Dream Phuket Hotel & Spa are nothing short of stunning. 172 luxurious guest rooms, suites and villas each feature spacious, modern design and thoughtful amenities. Be spoiled for choice, from private pools and fully equipped kitchens to rain showers and freestanding bathtubs. Relax and allow us to tickle your fancy. After working hard at playing hard, get your glow on from within at Sanctuary. Holistic and pampering therapies from deep tissue massages, aloe wraps, spice scrubs and Ayurvedic treats to mani-pedi services will put the pep in your step in no time. 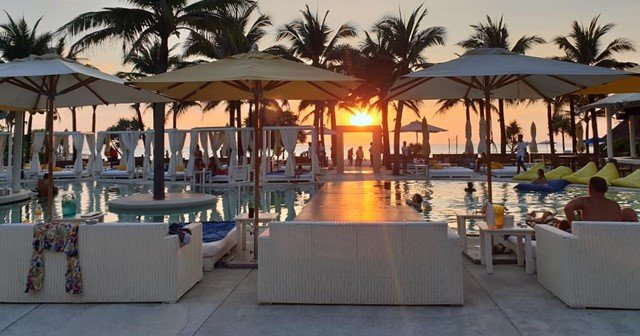 Located four minutes driving distance away on Layan beachfront is Dream Beach Club – the hottest place to be and be seen. A beach club like no other, this mutli-story escape will unleash your wild side at electric night club events and seductive daytime pool parties. A Void Acoustics Sound System delivers unrivalled beats for international house and dance music legends such from Ministry of Sound, Hed Kandi and Soul Heaven. This is the next best thing to paradise itself. Come live the dream like never before. 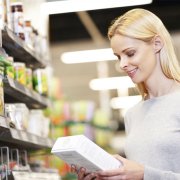 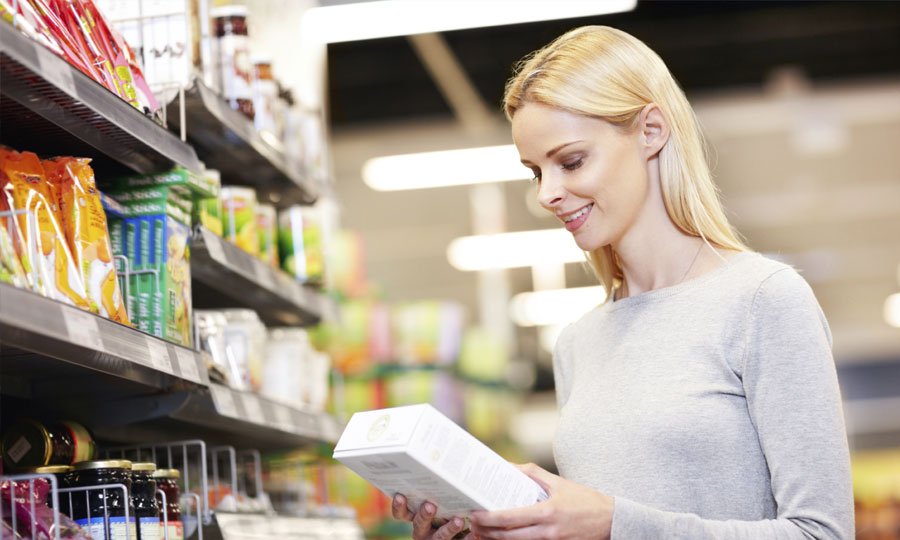 Additionally, more than half want to buy from brands that take stands on social issues.

At the same time, consumers are increasingly sceptical about these partnerships, seeing them as marketing stunts. It’s called ‘wokewashing’.

I’m a professor of brand responsibility, and my forthcoming research investigates brands and their relationships with social issues, including the importance of both allies and advocates.

In marketing terms, allies are members of a dominant social group that bring attention to important social issues.

A company can serve as an ally when it works to increase awareness about issues affecting marginalised groups.

Companies can be advocates when they create campaigns to promote institutional change and provide financial support for groups engaged in creating social change.

Yoplait’s campaign to address patronising attitudes toward mums is an example of corporate advocacy.

Another is Stella Artois’ partnership with Water.org to end the global water crisis. This partnership has already raised more than US$3 million in donations to give almost a million people access to clean water, according to a spokesperson from Water.org.

However, corporate adventures into social issues aren’t always well received or thought out.

For example, consider this year’s pride celebrations. The number of brands participating in pride was at an all-time high in 2019. Brands, including T-Mobile, Alaska Airlines and MasterCard, featured supportive messages and announced donations to support the queer community.

Pride sponsors also included brands Equinox and SoulCycle. Customers organised a boycott of the brands on August 7, 2019, after the chairman of their parent company announced he is hosting a fundraiser for Donald Trump, who advocates say is anti-LGBTQ.

Some LGBTQ community members did not welcome large brand sponsorships to pride, arguing that sponsorships take the focus away from issues of LGBTQ marginalisation. These brands were not seen as authentic advocates, as they were not contributing directly to LGBTQ causes, but instead were paying for exposure.

They argued that brands don’t really care about the community, pointing to a lack of supportive messages throughout the rest of the year.

There are also concerns from members of the community that brands associate themselves with pride while taking political stances that harm the LGBTQ community. More companies may be facing criticism of this kind as America approaches its upcoming election cycle.

The importance of allies

Some companies may use causes to pander to consumers and deserve to be called out, but my research shows that corporate allies and advocates can have an important role in society.

Both engagement through allyship and advocacy continue to be important to keep issues in the spotlight in order to create significant social change. 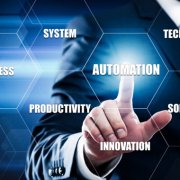 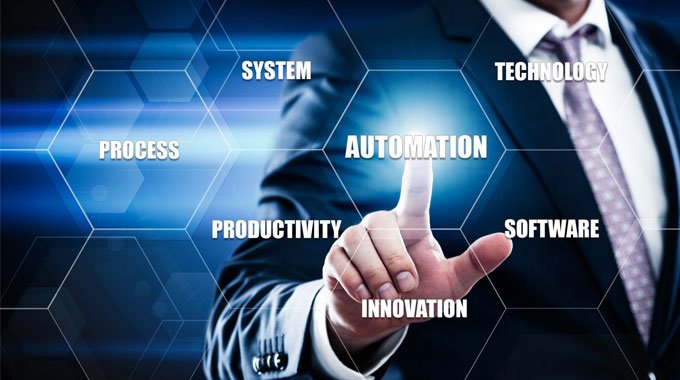 There are many options available in the marketplace, but make sure you find the right software technology for your business.

From free solutions for small businesses to sophisticated tools that can help a business become more efficient.

monday.com is a business management tool to manage all parts of your business. Create structures to plan your team workload, manage your projects, clients, and much more. It makes it fun and easy for everyone to collaborate, focus on what’s important, and get more done at work. It’s the first visual tool of its kind and shows you exactly where things stand at a single glance. Finally get rid of painfully long email threads, cut down on meetings, and get more done together.

NetSuite is the world’s #1 cloud ERP solution, providing a unified platform to streamline all business processes, like accounting, CRM, and e-commerce. With built-in business intelligence, reporting, and real-time visibility across your organisation, NetSuite empowers businesses of all sizes and industries to unleash growth, reduce IT costs, and eliminate operational inefficiencies — allowing you to focus on key, revenue-generating decisions, rather than worry about your back-end systems.

Easy to use and teach, Pike13 streamlines administrative tasks so that you can spend more time focusing on clients. The mobile-friendly Pike13 platform allows class-based businesses like strength and conditioning gyms, yoga and pilates studios, music and dance schools, and more to manage everything from clients and schedules to billing and payroll. Smart reporting offers actionable insights about business health, and a client app makes it easy to engage with clients.

Scoro is an end-to-end business management solution which allows professional and creative services to control their entire workflow from one place. Scoro provides all the tools you need to fully manage your business: project management, work scheduling & tracking, taskboards & lists, contact database & CRM, quoting and billing, advanced reporting, real-time dashboards, and more. You’ll have a complete overview of your business. Sign up for a 14-day free trial to see for yourself!

To find the right solution for your business and a more in depth look at the software tools available, then visit https://www.capterra.com/ for a wider range of options.