That comprises at least 86 temples which include the main Pura Penataran Agung (the Great Temple of State) and 18 others. 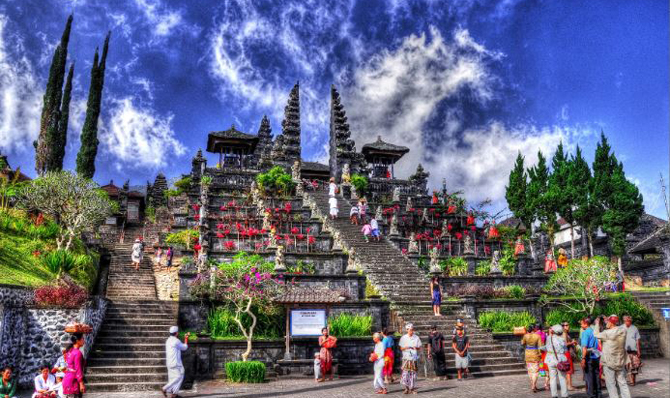 Known as Bali’s ‘Mother Temple’, for more than 1,000 years, has sat 1,000m up on Mount Agung’s southwestern slopes in the eastern part of Bali.

The high set location of Mount Agung gives the temple complex a mystical quality and for the local Balinese, visiting this temple sanctuary is a truly special pilgrimage.

A huge staircase leads you up the sacred mountain to many different temples that represent all different types, functions and status.

Today, it serves as a popular destination for visitors to Bali and as a place of prayer for local Hindu people.

This complex of Hindu temples is the largest, holiest and most important on the island and miraculously survived the catastrophic volcanic eruption of 1963.

Besakih Temple is located in Besakih Village, Rendang district, Karangasem – Bali. It is approximately 44km from Amplapura City, and 62km from Denpasar. Besakih Temple is famous for its complex of temples, which make it to be the Mother Temple in Bali.

To visit Besakih Temple, a tourist need an admission ticket.

Travelers can wander the stepped terraces and brick gateways of the 23 ancient temples that make up the complex and sit on several parallel ridges, some 3,280 feet (1,000 meters) up the side of this active volcano

The temples dedicated to the three main gods of Hinduism, Shiva, Vishnu and Brahma are surrounded by smaller structures housing temples to lesser gods or shrines to various Balinese castes. 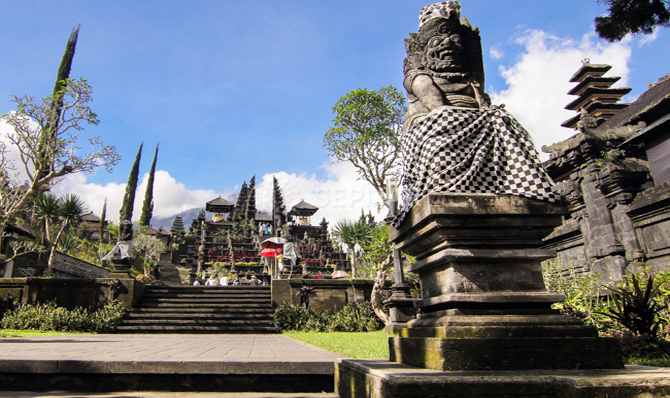 The largest temple in the complex, Pura Penataran Agung, has different areas representing seven layers of the universe, each with their own shrines.

Pura Pasimpangan on the downstream side (on the east of the main street) and Pura Pangubengan upstream are approximately three kilometres apart.

Located on higher ground, the closest to Mount Agung’s peak, Pura Pangubengan has great vistas and it’s about a 30-minute walk from the main Pura Penataran Agung.

Around 10 minutes to the east of Pura Pangubengan is Pura Batu Tirtha. It is where holy water is sourced for the ‘karya agung’ ceremonies at Pura Besakih and Pekraman villages.

Four temples in the complex reflect four forms of God at compass points: Pura Batu Madeg in the north, Pura Kiduling Kreteg to the south, Pura Gelap in the east, and Pura Ulun Kulkul in the west. ‘Batu ngadeg’, literally ‘standing stone’, is found in the shrine of Meru Tumpang Sebelas at Pura Batu Madeg.

This is where Vishnu is believed to descend. Still in the courtyard of Pura Batu Madeg, in front of Meru Tumpang Sebelas is the Pesamuan shrine (quadrangle-shaped with two lines of 16 poles) as a symbol of how Vishnu’s power interrelates with the world.

At least 20 minutes to the northwest from Pura Batu Madeg, down the footpath to the valley and along the river, is Pura Peninjoan – erected on a tiny hill.

The beautiful views from here include all the shrines of Pura Penataran Agung, beaches and southern Bali in the distance.

On the west is Pura Ulun Kulkul, famous for the main and most precious ‘kulkul’ (Balinese wooden slit gong) on the island. Kulkul is a signaling device to summon or convey special messages.

On the northern side of Pura Ulun Kulkul is Pura Merajan Selonding where the ‘Bredah’ inscription mentions a king in Besakih, and a set of ancient gamelan called ‘Selonding’ are kept.

Source: For more information on this amazing landmark and ofr other local attractions visit https://balicheapesttours.com